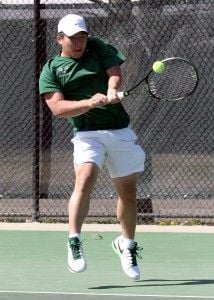 Our season kicks off with the Kingswood-Oxford Tournament, followed by dual matches almost every Wednesday and Saturday. The team has found great success in recent years, having qualified for the New England tournament every year since 2005. We work hard, show improvement, and, more importantly, have fun.

We ended 2017 with a record of 9-4, losing to KO in the semifinals of the New England tournament. The season featured a nine-match winning streak as well as a third place finish (out of 16 teams) in the George C. Shafer Doubles Invitational in Newtown Square, PA.

Deerfield’s campus offers 21 “no fault,” medium-speed hard courts, 18 of which surround our traditional pagoda on the low level. Our newly completed pavilion – named after Jay and Mimi Morsman, a longtime coach/faculty member and a former Director of Alumni Relations, respectively– covers six of these lower courts and allows for year-round play. During winter months, the sides of the pavilion will be closed to keep the snow and cold outside. This facility provides ample space and opportunity for students to enjoy the game of tennis.

We were one of the first prep school teams to partner with Universal Tennis; you can find our team page and results here.