Deerfield Academy is proud of its award-winning, active theater program. In a typical year, more than 100 students participate as actors and technicians and more than 2,500 patrons attend four annual productions.

Theater provides a plethora of benefits to those who study it, including increased confidence, resilience, collaboration, discipline, and creativity. 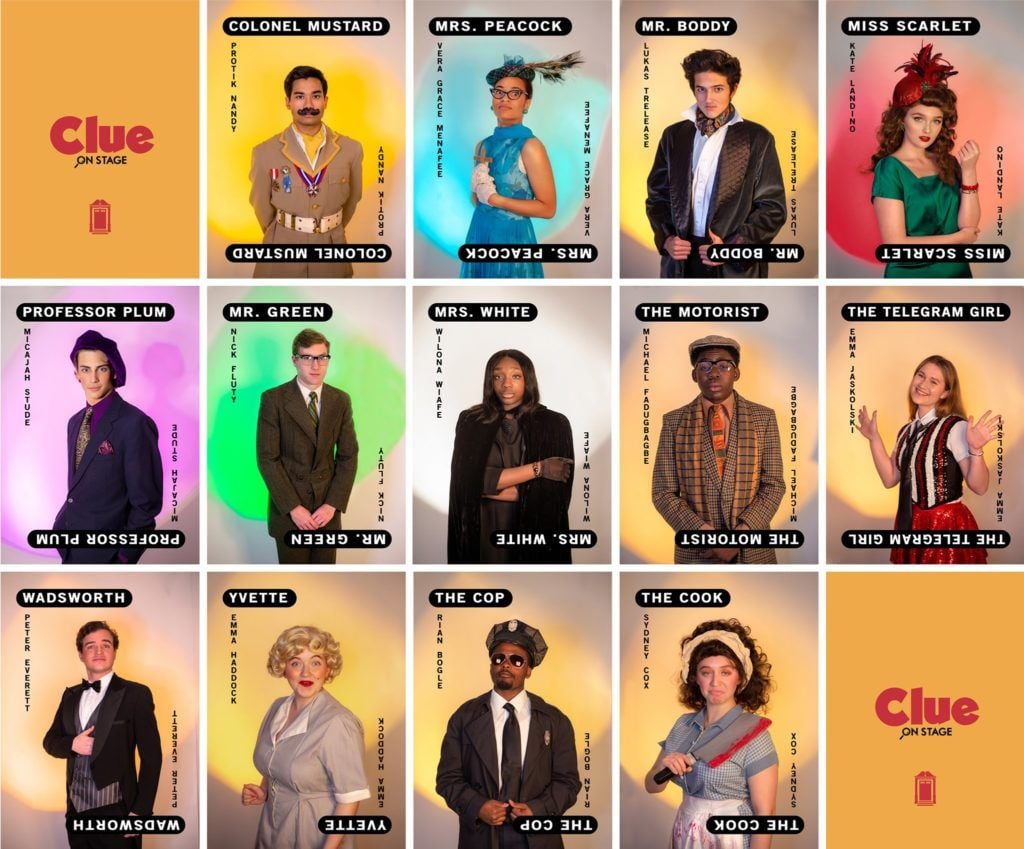 Lori Holmes Clark received her BFA at NYU’s Tisch School of the Arts in Drama before starting her first rehearsals at the New Amsterdam theater on Broadway two days after graduation. Mrs. Clark has originated Broadway musicals as a performer, understudy, and dance captain, but her heart lies in experimental and immersive theater. She is a proud member of both Actor’s Equity and SAG/AFTRA. Performance highlights include Wicked, Taboo, Footloose, Fosse, the Macy’s Thanksgiving Day Parade, Guiding Light,and documentary films, SHOWBUSINESS: The Road to Broadway and The Joy is in the Work. As choreographer, Lori was trusted to work with many greats including Paul Newman, Bernadette Peters, Kevin Kline, and Meryl Streep. Lori continues to educate and create new work in Europe, across the U.​S.​ and locally. She joined Deerfield Academy in 2010 and has contributed choreography to a decade of dance concerts and the musicals Cabaret,Spring Musical Revue, How I Became a Pirate, and A Sonnet in Your Pocket (Limerence and Rhyme). Lori lives with her husband, Ben, at Clarkdale Fruit Farms with their sons, Emerson and Elliot.

Eve La Puma (She/her) graduated from Stanford University in 2020 with a B. in Theater and Performance Studies (Acting Track) and a minor in Music (Bassoon/Vocal Performance). During her time at Stanford, Eve interned at the Gaiety School of Acting in Dublin, studied Shakespeare abroad for a quarter at Oxford University, served as Artistic Director for Stanford’s [wit]: a gender-conscious theater company-a student group that seeks to elevate the voices of those with marginalized gender identities, worked on many campus productions, and was involved in the creation of several new theatrical works, including the musical She Persisted which later moved to a sold-out Off-Broadway run. Outside of theater, Eve was a Resident Assistant in the All-Freshman dorm Donner, a Tour Guide, and an intern in the Graduate School of Business’s Alumni Relations. After graduating, Eve worked at Mary House, a non-profit that provides housing and resources for immigrant and refugee families in the DC area. At Mary House, some of Eve’s work included creating a music program with her sister Cece and serving as a Reading Buddy/Tutor in the After-School Program. Eve enjoys making music-especially with her sisters, reading YA fantasy novels, petting cats, and cooking food to share with others. She is thrilled to join the Deerfield community as a Penn Fellow in the Visual and Performing Arts Department

Karen St.Pierre is the Costume Designer and Craft Artisan responsible for designing all the costumes for Deerfield’s Dance and Theatre productions. She brings to the Academy years of experience in the theatre, film, and television industry. St.Pierre received her honors undergraduate degree in Fiber Arts from Massachusetts College of Art and Design. Karen is the recipient of numerous art awards, including the Marie Walsh Sharpe Scholarship, The Stephen D. Paine Scholarship, Massachusetts College of Art and Design Presidents Award, and most recently an Ovation Award nomination for Best Musical in 2016. Karen has worked on large-scale productions for premier regional theatres, Advertising campaigns, Cannes Film Festival, and with Earth, Wind and Fire to name a few. Karen believes that costume design is a vital art form that is a means of communication. Karen doesn’t confine herself to any particular area of art or fashion as she sees it all as inspiration. She loves the opportunity and challenge of designing for Dance and Theatre in the realm of visual art and where these ideas can transport our imaginations.

After graduating from Glasgow University with a joint Masters degree in English Literature, and Theater Studies (minoring in Philosophy and Archaeology), Ms. Hynds trained to be a professional theater director at the Byre Theater in St. Andrews, Scotland where she collaborated with Arthur Miller on her professional debut. She was the Artistic Director of Theater Works and a professor of acting and directing for various educational institutions such as The Royal Conservatoire, Glasgow, Queen Margaret College, Edinburgh and Manchester Metropolitan University. She came to Deerfield Academy eleven years ago, having been the Managing Director, Development Officer and Education Outreach Officer for the Freed Center for the Performing Arts at Ohio Northern University. Ms. Hynds has been invited to direct all over the world, and has enjoyed working in Mexico, Chile, and Israel. She is most proud of having been invited to direct for the National Theater of Iceland in Reykjavik. As Director of the Theater Program at Deerfield Academy, Ms. Hynds has directed approximately twenty five productions including Medea, All My Sons, 12 Angry Jurors, Cabaret, The Children’s Hour, Little Shop of Horrors, Antigone, and most recently Rumors. A great believer in the impact that live performances have on younger audiences, Ms. Hynds enjoys touring children’s musicals to local schools, and then travelling to her homeland to perform these same productions at the largest theater festival in the world, The Edinburgh Fringe Festival. Ms. Hynds is currently the Chair of the Visual and Performing Arts Department.

Acting II is for students interested in expanding their ability to communicate through a variety of techniques that engage the individual and ensemble physically, mentally and emotionally. Through monologues, scene work, and improvisation, students explore the act of making theater of all types. No previous acting experience is necessary. This is a one-term course. May be taken as 6th course: THE300P.

THE306 - Anything Goes: Musical Theater

Anything Goes: Musical Theater is for students interested in learning the basic principles of acting and singing in a musical theater context. Over the length of this course, students will gain practical and theoretical knowledge of musicals through creative work for performance pieces and contextual lessons on musical theater history. No previous experience is necessary, although some background in singing is helpful.

Committed acting students are encouraged to progress to a more advanced study of acting and to contribute to the development of a creative ensemble. In addition to learning more complex acting techniques in preparation for the scene work to come, students delve into the world of directing for theater. Students work on a major directing assignment, which culminates in directing a scene with their peers as performers, from their chosen play. Several plays from around the world are also read and analyzed throughout the term. No previous acting experience is necessary. May be taken as 6th course: THE400P.

This course analyzes and critiques classic and contemporary cinema from around the world. We shall examine basic elements of film production, comparative filmmaking styles and various genres such as Film Noir, Surrealism and Italian Neo realism. Additionally, students study prominent international filmmakers. Weekly screenings are mandatory.

This elective is for students who have an interest in a more in depth study of theater. In addition to honing performance skills, students will explore a number of wide ranging plays of different genres from around the world. There will also be several performance and directing opportunities throughout the term, culminating in a class presentation. May be taken as 6th course: THE510P

Take to the stage

Since 2002 Deerfield has been selected four times to represent the United States in the American High School Theatre Festival at the world-renowned Edinburgh International Fringe Festival in Scotland. There are plenty of ways to get involved in theater at Deerfield. Numerous classes are offered throughout the year, ranging in levels from Acting I to Acting and Directing for Production, a tutorial-level class. More focused courses and workshops on Shakespeare, writing, directing, auditioning, and improvisation, are offered at various points throughout the year.

How are students placed in the appropriate level of math and language classes?

Before they enter Deerfield, all new students are required to take a math placement test to determine an appropriate class. Students who have already taken a language they wish to continue studying at Deerfield will take a placement test to determine what level class they should take. If the placement in either department is deemed inappropriate after the student arrives, then the section teacher may suggest a change of level. Students may also request such a change and should consult with their teacher and their academic advisor before contacting the Dean of Studies.

When do students typically study abroad?

Study abroad is available to all students from their sophomore to senior years, although typically students who choose to go abroad will do so during their junior year.

Does Deerfield have an honor roll?

Because of its commitment to rigorous academics, Deerfield offers a wide range of accelerated and Advanced Placement courses. All of Deerfield’s classes are appropriately challenging, but AP and accelerated courses provide an extra challenge for ambitious students.

What role do advisors play in students’ educational experience?

All students are assigned a faculty advisor at the beginning of their time at Deerfield. After their first year students may choose a new advisor, or continue with their original one, depending on the relationships they have developed with Deerfield’s faculty. Advisors are responsible for submitting course requests and writing an advisor report every term. They are available for any questions a student may have and are involved in every major academic or athletic decision a student makes while at Deerfield. In addition, faculty eat lunch with their advisees every Thursday and may schedule outside events for their advisees. Advisors are a key component of the Deerfield experience, as they provide guidance and friendship to students throughout their time at Deerfield.

The Pursuit of Excellence Policy states that students may miss up to five class days a year if an unusual and extraordinary opportunity arises, including opportunities in a variety of academic, athletic, and artistic fields. The Academic Affairs Office determines the legitimacy of pursuit of excellence requests on a case-by-case basis.