After a great day of racing that saw all four crews earn places on the awards dock, the Deerfield boys rowing team finished second in the team standings at the New England Interscholastic Rowing Association (NEIRA) Championships held on Saturday, May 25 at Lake Quinsigamond in Worcester, MA.

The Deerfield first boat which included; Henry Lowe ’19, Nico Salazar ’19, Jimmy Patton ’20, and Tommy Gilmore ’20, and was coxed by Kristen Ivey ’19 won their morning opening heat, qualifying them for the grand final race in the afternoon. In the grand final, the Big Green went head-to-head with crews from Belmont Hill, Nobles, NMH, Old Lyme, and Berkshire. The Big Green prevailed over the other five boats, crossing the finish line six seconds ahead of second place Belmont Hill to capture the gold medal for the sixth consecutive year in the 1V event. 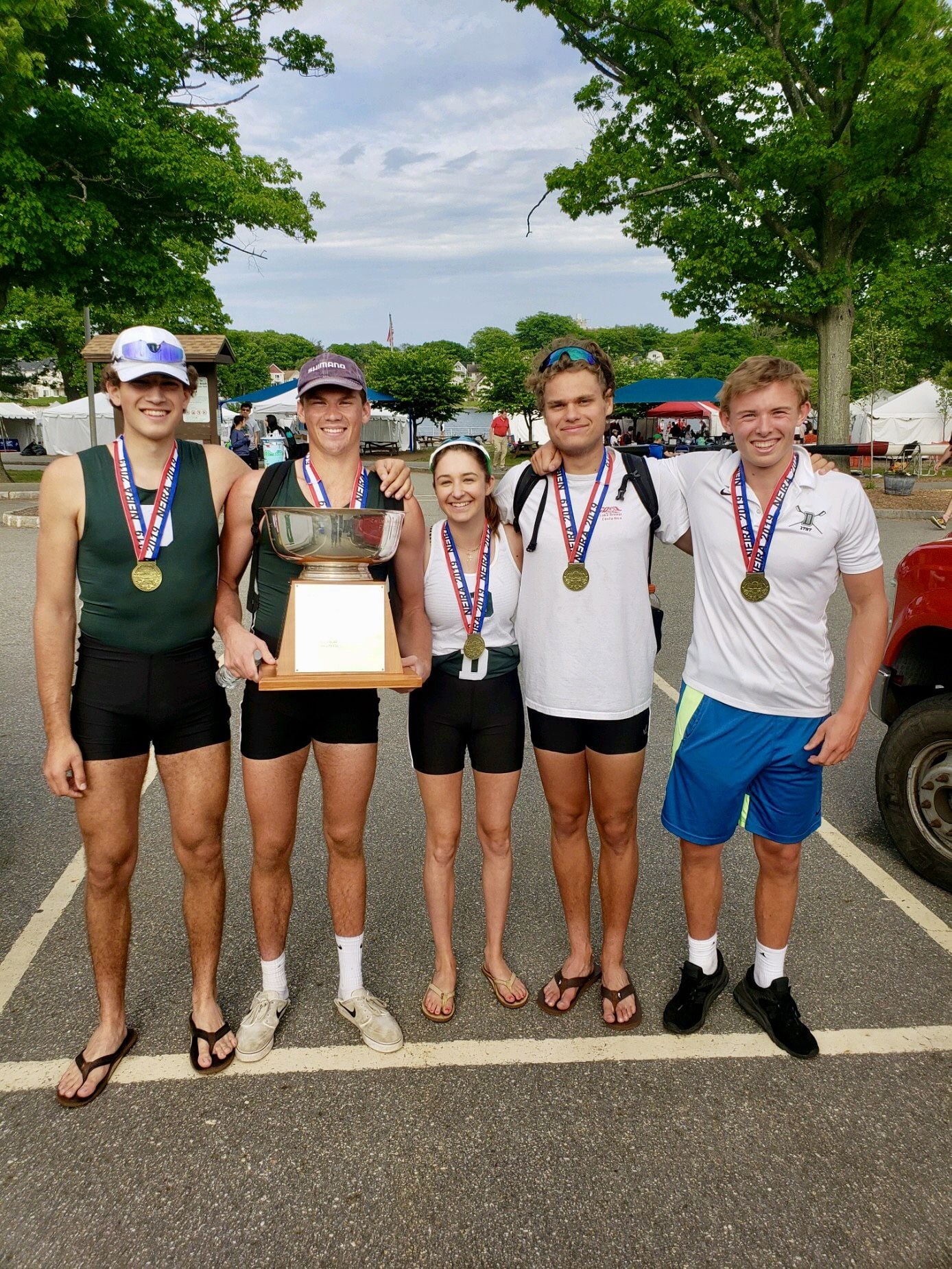 Deerfield’s second boat finished second in their opening qualifying race, earning their spot as one of six boats in the grand final.  At the starting blocks for the boys 2V grand final the Big Green boat was accompanied by five other qualifying boats including boats from Belmont Hill, Nobles, Groton, NMH, and Brooks. It was an extremely competitive race between Deerfield, Belmont Hill and Nobles boats, with less than 1.5 seconds separating the three boats at the finish line. Ultimately, Belmont Hill crossed the finish line first (5:24.632), followed by Nobles (5:25.408) and Deerfield (5:26) for the bronze medal. The second boat was coxed by Inthat Boonpongmanee ’19, George Fauver ’22 sat in the stroke position, Skye Bacon ’20 rowed third, Jake Meier ’20 rowed second and Karim Kane ‘20 was at the bow.

The boys third boat of Allison Xia ’21 (coxswain), Christ Thagard ’20 (stroke), Punisa Lekovic ’19 (3rd), Hayden McGuiness ’20 (2nd) and Owen Louis ’19 (bow), set the tone early in their qualifying race by finishing first with a commanding six second lead over the next finisher, Nobles. In the grand final race, it was a dueling race between Deerfield and Belmont Hill for the gold and just over a second separated the two boats at the finish line. The Big Green earned the silver medal in an incredibly gutsy race to the end.

In the fourth and final boat for the Big Green, the crew qualified for the grand final by dominating their qualifying race. In the grand final, the Big Green crew was in yet another head-to-head race with Belmont Hill for the gold. At the finish line markers, just over a second separated the two boats. Belmont stroked across the finish line for the gold and the Big Green followed closely for the silver medal. Deerfield’s fourth boat was coxed by Mark Chung ‘21, JJ Siritantikorn ’19 rowed stroke, Ron Finkelberg ’21 was in the third seat, Spencer Hurst ’20 rowed second and Zane Smith ’20 was in the bow position. 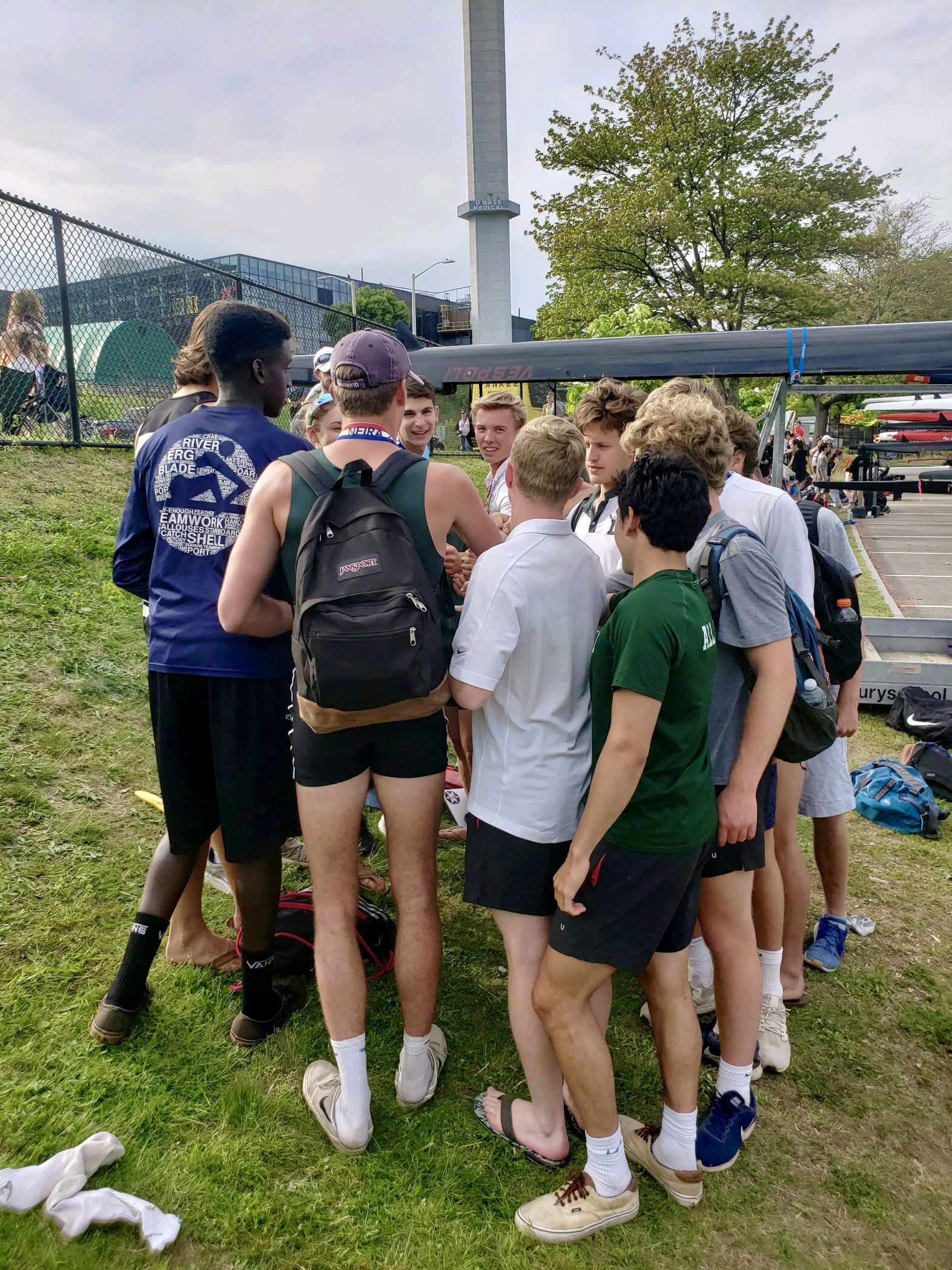 The season culminating NEIRA Championships capped a perfect 5-0 season record for the Big Green and the rowing season will continue for Deerfield’s first varsity boat. By winning the Grand Final at the NEIRA Championship, the crew automatically qualified for the upcoming 2019 US Rowing Youth National Championships in Sarasota, FL. The championship will begin with opening qualifying races on June 6 and conclude with the grand final races on June 9.

For more information on the National Championships, click here.

Congratulations to the Big Green on their 2019 season! Best of luck at Nationals!