The girls first boat led by coxswain Jerilyn Zheng ’19, Morgane Dackiw ’19 at stroke, Melissa Mitrovic ’19 in the third seat, Kikka Guidici ’20 rowing second, and co-captain Bailyn Pritchett ’19 rowing at the bow, commandingly won their opening qualifying heat. With the qualifying heat win, the team earned their spot in the grand final race in the afternoon. In the grand final race, the Big Green crew lined up against crews from Nobles, Winsor, Groton, Choate and Greenwich. It was a tight race from the start. At the end, three boats took the lead – Deerfield, Nobles and Winsor. Ultimately, it was the Nobles crew who inched out the Big Green boat at the finish line by only a second. 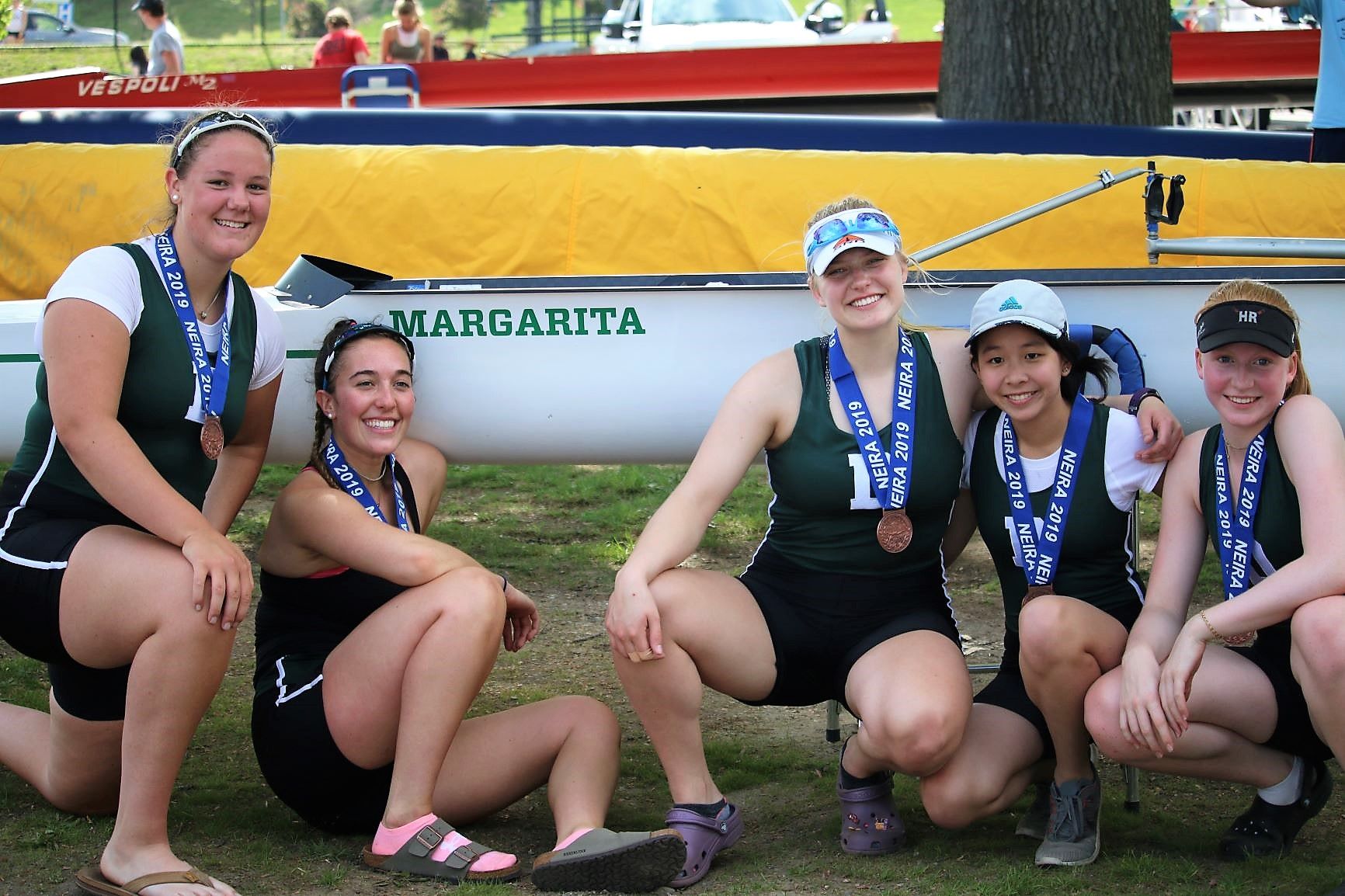 In the girls second boat, the crew finished in first in their qualifying race, earning their place in the 2V grand final race. The crew including; coxswain Trisha Boonpongmanee ’20, Daisy Dundas ’21 at stroke, Katie Zaslaw ’19 rowed the third seat, Claire Cummings ’21 was in the third seat, and Valerie Hetherington ’19 was in the bow. In the grand final race, the Big Green faced off against crews from Nobles, Greenwich, Groton, Choate, Brooks, and Buckingham Browne & Nichols. The Big Green crew raced ferociously to the finish line, crossing the finish line at 6:22.970 to earn the bronze medal.

Jing He ‘21, Emma Johnson ‘21, Tory Hansen ‘21, Michelle Zimmermann ‘21 and Noelle Abeyta ’21 comprised the crew in Deerfield’s third boat at the NEIRA Championships. In the qualifying race, the boat finished third, edging their way into the six boat grand final race. The starting line of the 3V grand final included boats from St. Mark’s, Choate, Taft, Winsor, Nobles and Deerfield. It was a close race between all six boats. The Big Green crew raced to a sixth place finish in the grand final.

Deerfield’s fourth crew consisted of several rowing newcomers, Aerin Lo ’22 at coxswain, Willow Woodward ’22 at stroke, Lily Nottage ’22 in seat two and Angie Deboer ‘21 at stroke and veteran leader FJ Marsh ’19 in the second seat. This group cohesively stroked to a fourth place finish in their qualifying heat with a time of 6:10.776, just missing the qualification for the 4V grand final.

The Big Green team amassed 29 points overall from their finishes at the championship, placing the team in third place just behind Nobles (42 points) and Choate (33 points).

With their impressive season record and silver medal at the NEIRA Championships, the Big Green first boat were invited to the upcoming 2019 US Rowing Youth National Championships in Sarasota, FL at Nathan Benderson Park from June 6-9, 2019.

For more information on the National Championships, click here.

Congratulations to the Big Green on their 2019 season! Best of luck at Nationals!