Ninth grader Kylie Kittridge started swimming last year, at the Bement School, and we are fortunate to have her on our team.   In her second season swimming, she has clearly entered her swimming stride.  At a home meet against Stoneleigh-Burnham, Kylie dropped a few seconds in the 100 backstroke, and she excelled in the 50 butterfly in the medley relay.  Kylie posted a best 100 free time leading off the 400-free relay.  Over the weekend at Eaglebrook, Kylie boldly competed in the girls’ pentathlon at the Nick Wyte Invitational, with personal best times in the 50 backstroke and 50 breaststroke.   A quiet leader and wonderful teammate, Kylie personifies the athlete of the week ethic.

Piper Day has made her mark in the pool, competing for the second year for Deerfield Academy.  It is notable that Piper was a “swim on” member last year, with no previous team experience.  Piper has made consistent strides in the pool, and recently, in a home meet against Stoneleigh- Burnham, she clocked best times in the 100 free and in the 50 free, as the anchor in the 200 medley relay.  At the Nick Wyte Invitational at Eaglebrook on Saturday, Piper had personal best times in the 50 breast stroke and the 50 free.  Piper is a dedicated teammate, clearly deserving of the athlete of the week honor.

A talented athlete, Declan Cullinane brings his passion for competition to the pool.  This year, Declan has joined the JV team, so he can also continue training for his terrestrial events on the track team.  We have benefitted from Declan’s enthusiasm for his teammates and his quick times, and we will cheer him on when he competes at the New England Championships next weekend.  This weekend, Declan crushed his own expectations with a speedy 50 fly (26.9 sec), a solid 50 backstroke (28.8 sec) and a season best 50 free (24.1 sec).   Quietly confident, Declan is a natural leader, a supportive teammate, and a deserving recipient of the athlete of the week award. 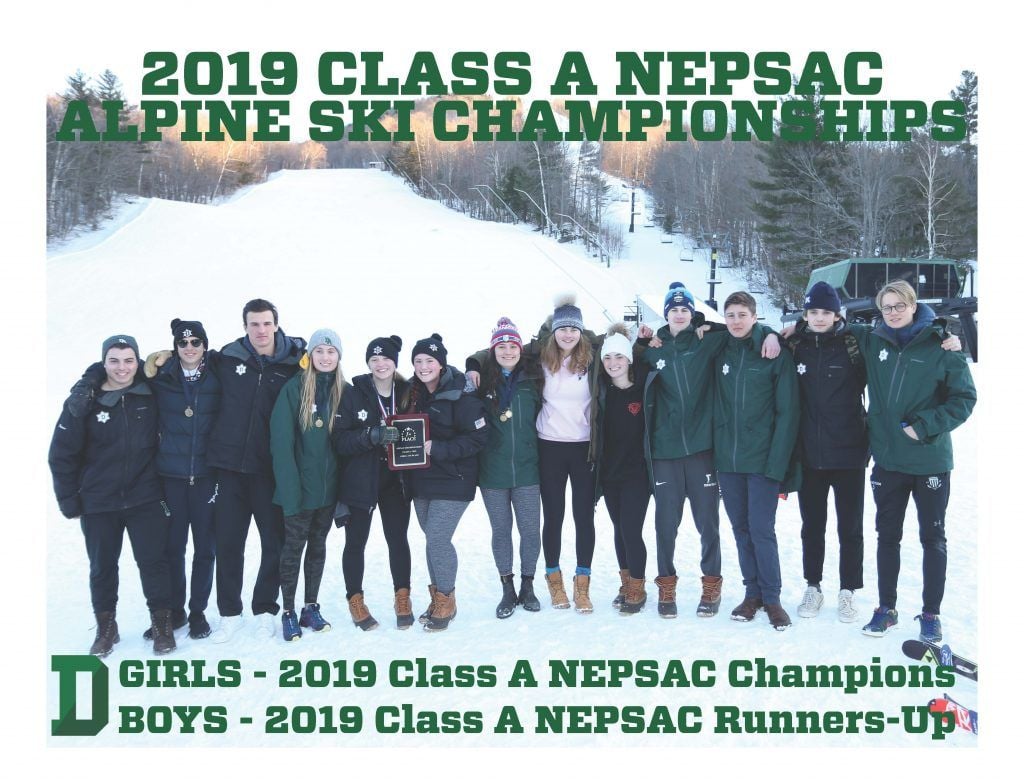 Kyle Patton is this week’s boys hockey AOTW. Kyle stepped up on Saturday to fill in for some injured players and did a great job against Exeter. He played mistake-free hockey from start to finish and was ready when his name was called. He seized the opportunity and made the most of it. 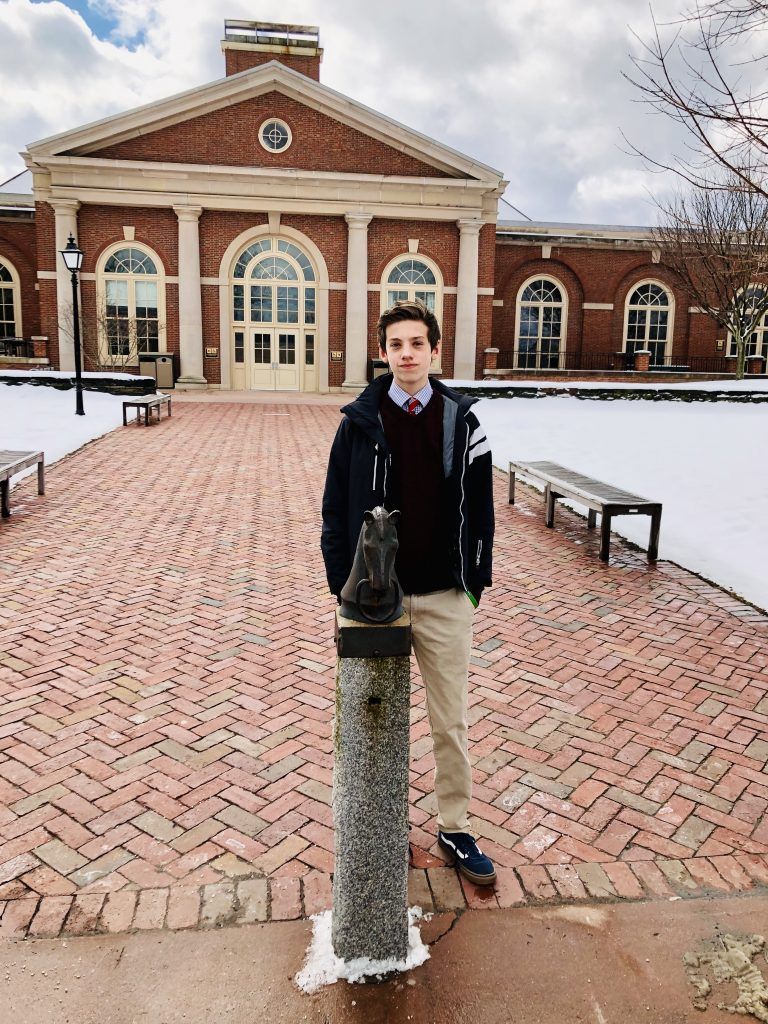 Mary Edmonds is our athlete of the week. Mary has been consistently excellent for us this year, and her hard work this season was rewarded with her 4th hattrick of the season during our game vs. Cushing. Not only is Mary our leading goal scorer, and point getter, but she is a leader by example with her work ethic and intensity. She earned this week’s athlete of the week based on her performance not only last week, but all season!

Anne Brown has been working hard on her game all season. Her match against Suffield Academy was a demonstration of grit and serious hustle. After Anne took the first marathon game 18-16, the match went back and forth all the way to the end. Anne covered the court expertly, outlasting her opponent and bringing home the victory in the fifth game.

Our athlete of the week for girls swimming and diving is Charlotte Otis.  Charlotte has been a welcomed addition to our team this year.  She comes to practice every day with a smile, eager to see her teammates and work hard in the pool.  She is a true competitor and she races every race with heart, all the way through to the finish.  Charlotte swam to a narrow first place finish in the 200 IM on Saturday, touching out two competitors to give DA a lead early in the meet.  Her exciting win energized and inspired her teammates to swim their hardest, resulting in a victorious last dual meet of the season for the DA girls.  We are thrilled to have Charlotte as part of our team this year and we are excited to see her develop throughout the remainder of her Deerfield career!

For his exhilarating finish in the 200 Free Relay against Loomis on Saturday and his many contributions to the team this season, Vojta Kupka is the athlete of the week for Boys’ Varsity Swimming & Diving. Since his arrival in the fall, Vojta has brought a positive attitude, a jovial wit, and a love of swimming to the pool deck. His efforts on the training trip were unparalleled, particularly in the 50x50s workout. While undermined by physical setbacks in recent weeks, Vojta still comes to practice every day ready to train to the best of his ability. His consistency in the face of these challenges paid off on Saturday when he swam an impressive 22.52 split for the anchor leg of an incredibly close 200 Free relay that turned the tide of the meet in Deerfield’s favor. He  The team has benefitted immensely from Vojta’s leadership by example this year and we are grateful for his commitment to his teammates and the sport.

John served as one of three captains for varsity wrestling in the 2018-19 season. A consistently intense competitor and an intentional, thoughtful leader, John always set a high bar for the team. As captain, he was the very quintessence of leadership, modeling the commitment and dedication he expected from his peers; as teammate, his composure and enthusiasm inspired younger wrestlers. John’s competitive season was excellent. Through his success in league matches, he qualified for the New England tournament; the acme of his season was his seventh-place victory at New England’s—a significant achievement, especially given his fiercely completive weight class. As both wrestler and captain, we have all benefited from John’s charisma, troth, and gentle touch. He’s a fantastic athlete and an inspiring leader.

This week we celebrate Jada Howard (’19) and Nicole Da Costa (’19) as our Athlete’s of the Week. As their four-year tenure on the JV team comes to an end, we​ salute them for their steady play and outstanding leadership this season. They were both critical in our big win against NMH last week. Their confidence was high, and their energy was through the roof. As the point guard, Jada kept us steady and calm on offense and played incredible defense against NMH’s best ball handler. Nicole used her quickness to lead the charge on defense. She put forth a tremendous defensive effort, intercepting a few balls and forcing NMH to make turnovers. They led by example. They put forth their best effort, and their teammates followed suit. Thank you for four great years Nicole and Jada!!

Ella Mbanefo ’22 and Elena Lu ’22 have been team leaders on the court all season, both in their performance and in their support of other team members.  This was never more evident than during our final game of the year last Friday when, despite having to sit out, they provided encouragement and strategies for the five players on the court, cheering louder than the rest of the assembled fans combined.  For their leadership in both actions and attitude, Ella and Elena are our Athletes of the Week.

All season long, Griffin Dewey has been relentless on the court, giving 100% to retrieve every ball and to place every shot.  Focused, determined, and poised, Griffin stands out as a smart, strategic player, who also supports her teammates with sound advice and leadership.  Chalking up an impressive 10-0 undefeated record in regular season match play, Griffin is this week’s Girls Varsity Squash AOTW.

3D boys’ hoops AOTW is Ryan Shin. Ryan brings skill and enthusiasm to the game of basketball. He has proven himself to be sound in scoring the ball and strong in making defensive stops. He is a well-rounded guard, and the Deerfield community looks forward to his continued growth both on and off the court.