Last Wednesday, we found ourselves locked in battle with Eaglebrook, the match tied at 3-3 with only Connor left on court. In front of a large crowd, Connor found himself facing match point in the fourth game. He saved that point, then saved three more match points as the game went to overtime. Connor ended up winning the game 15-13, then went up 5-0 in the decisive fifth game and never looked back! His incredible five-game win clinched a 4-3 victory for us and maintained our undefeated record. Connor followed up that performance with a dominant three-game win at Westminster on Saturday, leading the team to a 7-0 sweep. Connor’s tough play in the top spot has been a major contributor to our success this year, and we will lean on him heavily over the next two weeks. 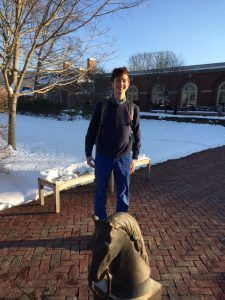 Crawford Rice is the Athlete of the Week for the boys thirds basketball team this week following his strong and gutsy performance against Suffield Academy on Saturday. Crawford led our scoring with 10 (a little more that a quarter of our total output) but it was his bravery that made the 10 so noteworthy. Playing against an older and sizeable front line (picture football offensive line types), Crawford scored his points driving to the basket and challenging the bigger opponents and quite often getting knocked to the floor for his efforts. Each time, Crawford just dusted himself off and went about his business. From the first days of practice Crawford has impressed with his hustle and skills and we look forward to seeing his continued improvement.

Raegan Hill is GVH Athlete of the Week. In a week where many players were out due to injury, illness or family commitments, Raegan raised her game both on and off the ice. She was a positive presence on the bench, continually cheering on her teammates and keeping the energy high, and also worked hard and smart on the ice in different line combinations. Great job, Raegan!

John Chung ’20 wrestled exceedingly well on Saturday during the Andover Quad. Whether John was dominating his opponent or earning a last-second victory, he was working hard for himself and his team.

The Athlete of the Week for Boys Varsity Swimming & Diving is senior Michael Wang. Returning to the team after a hiatus, Michael consistently strives to improve and puts his best effort into every set and every race. His hard work paid off last week when he posted a best time in the 50 Free at Suffield and dropped 16 seconds in his 200 Free at Exeter. Michael also willingly stepped up to the challenge of the 100 Fly on Saturday and finished the event saying he would like to do it again. His attitude and dedication are therefore celebrated this week. We look forward to seeing what Michael achieves next.

Sam Powell is the boys’ basketball athlete of the week nominee. He has emerged as a steady floor leader for our squad. Dishing out assists and playing solid defense. He is a good communicator who keeps his teammates focused and locked in.

Meredith is a quiet leader on the JV hockey team; she is always giving her best at practice and in games.  Her stoic competitiveness is matched with stellar sportsmanship.  She is always a team player, and this week, scored in each of our games.  Meredith is skilled at hockey (a true playmaker) but she is a great person to have among us.  Cheers to Meredith!

The Girls’ Varsity Basketball Athlete of the Week is senior Imani Kindness-Coleman. Imani sparked Deerfield’s offense and defense on Saturday against Exeter, finishing with 11 points, including three “and-one” plays. Imani was able to score in a variety of manners: steals and layups, offensive rebounds and strong moves in the post. Her hustle and grit lifted our team to a 65-40 win over Exeter. We look forward to more strong and inspired play from Imani this season!

Karen has delivered two gutsy performances for thirds squash already this season. Both of her matches demonstrated the meaning of resilience and poise when faced with tough competition.  Karen’s positive attitude and fantastic sportswomanship sets the standard when we compete with other schools.

Soo-Min Lee is the Girls’ Varsity Squash Team’s Athlete of the Week.  With determined focus and strategic play in two tough matches, Soo-Min maintained her undefeated streak.  Her terrific victories over her opponents from Nobles and Choate were key in keeping the team’s record unblemished, too!

Jane Mallach (’20) is this week’s athlete of the week. Jane is a strong ball player, but most importantly, a good teammate. As a point guard, she sees the floor well and distributes the ball to get everyone involved in the offense. One of the more experienced players on the team, she willingly shares her knowledge with younger players and gives constructive feedback to her teammates during practices. In an exciting game against a strong Taft team last Wednesday, Jane set the pace on the offensive end, finishing as the top scorer for our team. She played well on both sides of the ball, forcing turnovers from the other team with her “in your face” defense. Keep playing hard Jane!!​