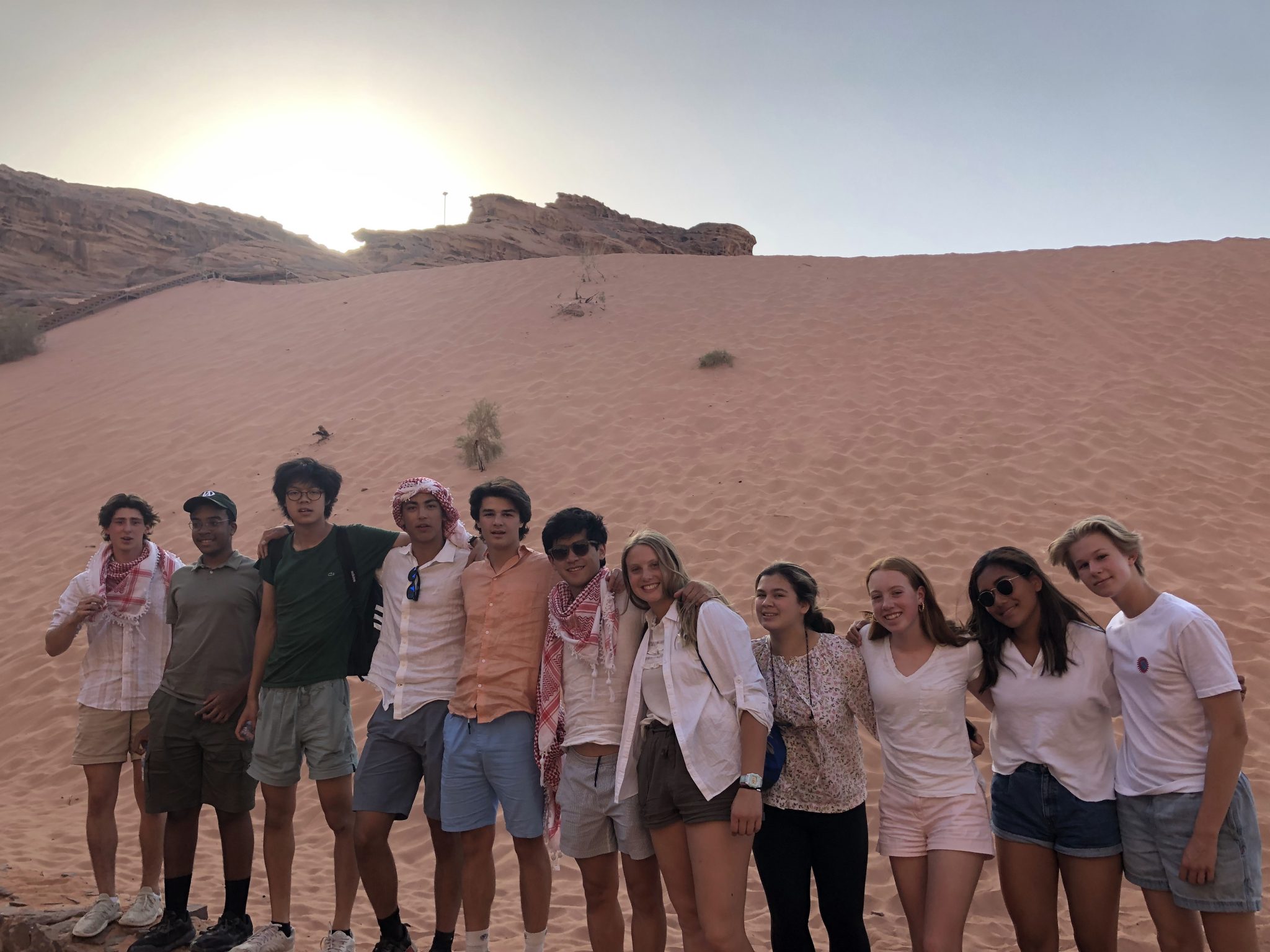 To many people, including Josephine and I (prior to today), the name “Petra” engenders an image of The Treasury, the most elaborate structure in the ancient city (pictured below). Although the magnificence of The Treasury’s intricately carved rose-red sandstone remains unmatched, the walk there from the visitors center also held many key features and landmarks of the ancient city.

The first landmark was the Obelisk Tomb, a multi-story burial structure carved into the sandstone of the desert. Featuring two levels with distinct functions, our tour guide, Rasha, explained that the Nabataeans had built the upper level as a tomb and the bottom level as a triclinium, a formal dining room. As we entered the canyon leading to The Treasury, Rasha pointed out the ancient waterways and water filtration systems subtly carved into the sandstone. Continuing our walk, the yellow sandstone began to turn into the red-rose color synonymous with Petra, hence the nickname the “Rose City”; We knew that The Treasury was forthcoming. Hot and sweaty yet still high-spirited, we reached the final stretch of the narrow canyon. As we approached the clearing containing The Treasury, the canyon narrowed even further. After a few more steps, The Treasury appeared. The explosion of brightness from the clearing, combined with the towering 39 meter structure, after the seemingly never ending canyon was just as Ms. Samawi had described: “nothing, nothing, then boom!” 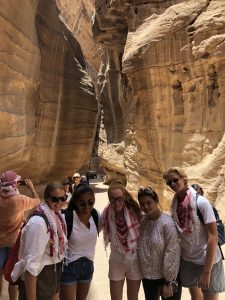 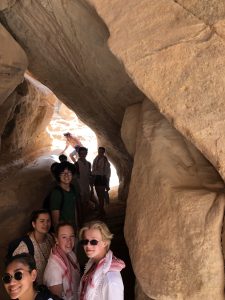 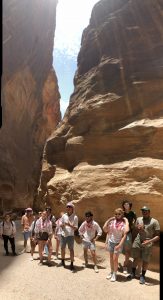 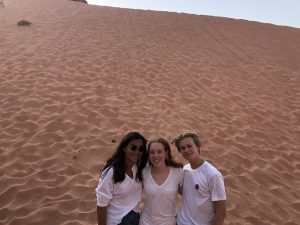 After leaving Petra, we hopped on the bus again and headed to Wadi Rum, the desert where we would be staying the night. The whole group played a variety of fun games together to pass the time, and soon enough we were in the desert! Sand surrounded every inch of the ground while huge mountains of rock covered the land around the dusty ground. We jumped into trucks and rode through the desert stopping at sand dunes to hike to the top and run down at full speed and at several sites where the native peoples, the Bedouin, had carved several messages and images of figures such as Lawrence of Arabia into the rock formations. Finally, we climbed to the top of a tall rock and sat to watch the sunset peacefully behind the mountains and the vast open space.

At one point, Mr. Romick lost his hat, but luckily a caravan of camels picked it up and returned it to him! After watching the sunset, we returned to camp to enjoy a delicious dinner, cooked inside the ground. We watched in awe as the staff of our campsite pulled out a variety of meats and vegetables that had cooked for over three hours out of the hot sand. We ate lamb, rice, pita, potatoes, many different vegetables, chicken, followed by some juicy watermelon for dessert. As the disappearance of the sun had finally caused the desert to fall dark, we climbed up to the top of the nearest sand dune and laid to watch the stars in the sky. With the sounds of music playing from our camp echoing through the vast land and a soft wind blowing around us, it was a magical moment. When we finally returned down to the camp, we were greeted by Esam , our wonderful bus driver, who led us in some traditional Jordanian dance. We all joined hands in a line, stepping and stomping to the beat of the music. We didn’t stop laughing happily the entire time, and it felt as though the entire world had fallen away around us. Each step took careful movements, but once we got it down, we were rocking it out on that dance floor.

We cannot wait for tomorrow and to see what the rest of our final three days will bring! See you later! 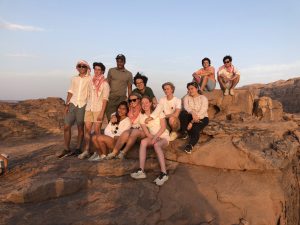 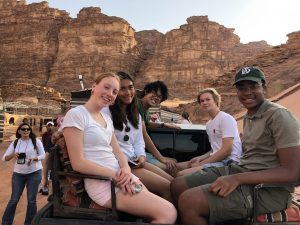 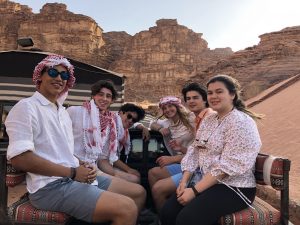 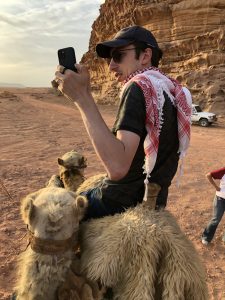 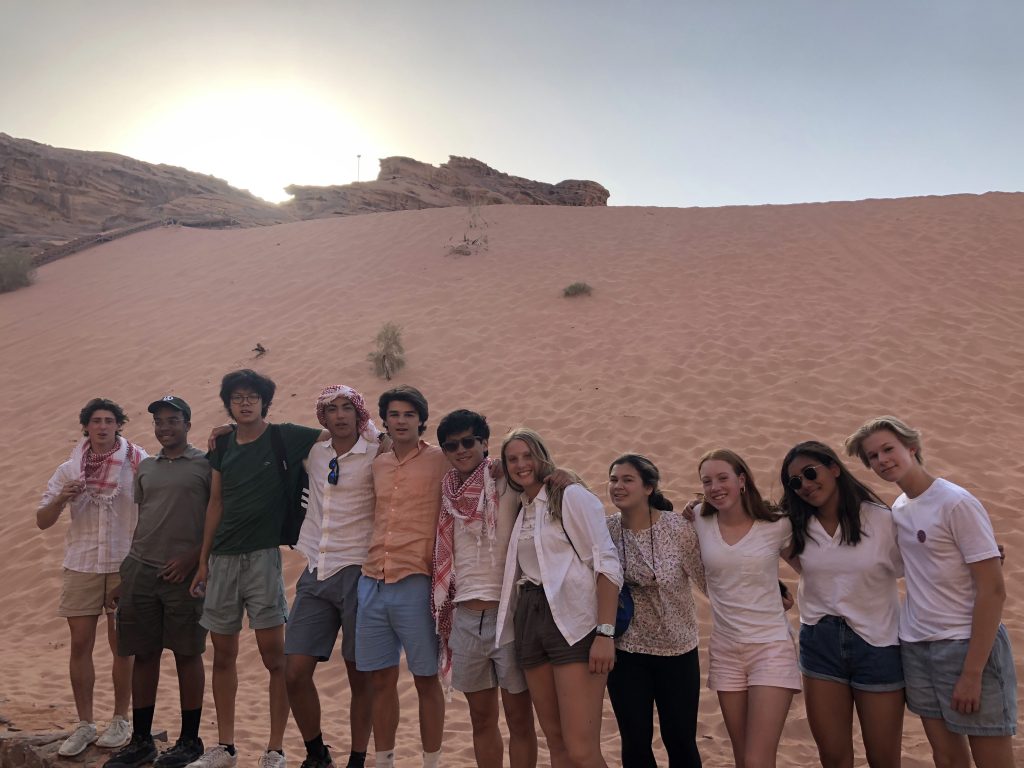