The boys and girls varsity track and field team wrapped up their season this weekend at the New England Division I Track and Field Championship hosted by Phillips Exeter Academy. A number of brilliant individual performances, including three new school records, highlighted a very exciting day for Deerfield track and field.

It was fitting that in her final meet in green, captain Felicia Renelus ’17 broke her school record in the long jump not once, but twice in one day! After surpassing her personal record (PR) and school record by two inches on her fourth jump, making the new mark 17-9, the senior exploded off the board in her final attempt and shattered the previous mark by 10.75 inches. The 18-7.75 jump was a full foot further than the mark Renelus entered the event with and helped her earn a first place finish in the process. Felicia will move on to compete for Brown next year and her new mark would have earned her an eighth place finish at this year’s outdoor Ivy League Championship meet, an impressive mark for a student-athlete that is still in high school. 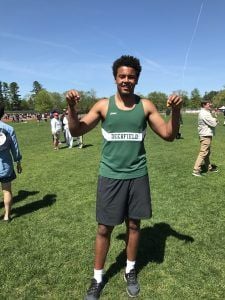 While her teammate was making a splash in the jump pit, senior Ericka Ekhator ’17 was setting a new school record and some PRs of her own over in the throws. Ekhator started the day by setting the new Deerfield mark in the girls shot put when she took third in the event on a throw of 35-5.50. After a great first event, Coach Pitcher knew that it was going to be a great day for the senior thrower as Ericka shifted her focus to the discus. She set her second PR of the day when she launched the discus an impressive 102-07 and picked up a second place finish.

On the boys side, Dallas Hobbs ’17 also had a great day in the throws. The senior, who is heading to Washington State to play football next fall, set two PRs of his own. On his last attempt in the discus, Hobbs eclipsed his personal best with a throw of 160-0 and finished second behind a very talented thrower from Andover. However, Dallas was able to edge him out in the shot put and take first place on a throw of 58-00, his second PR of the day.

Once things got started on the track, the Big Green were ready to compete and did so from the very first event as the boys 4X100 M relay team managed to score from the first heat, taking home a fourth place finish. The four members of the relay team were Milo Defay ’18, Jake Gallehdari ’17, Peter Pulai ’18 and Gozzy Nwogbo ’18. It was very exciting to see the team of four finish the way they did. Next year’s relay will have a solid foundation, as three of the four boys will be returning as seniors. 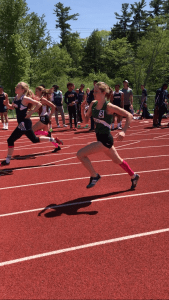 In the girls 400 M dash, Lily Louis ’18 ran a great race in a very talented pool that saw two girls break the 60-second barrier. Louis finished in sixth and earned her team a point in the process. Moving up to the 800 M, Victoria Patterson ’20 took home third and set the third and final school record of the day with an impressive run of 2:21.38. Patterson followed up the gutsy 800 M race with an excellent 1500 M (4:46.17) where she also took third, missing second by .07 seconds.

In the final distance event of the day, the 3000 M race, Erin Hudson ’18 put pressure on a very talented Andover senior and finished in second with a time of 10:24.54, beating out the third place finisher by more than 35 seconds.

On the boys side of the 3000 M, Hughes Benjamin ‘17 ran a terrific race, taking home second place (9:07.07) and showing great mental toughness after running a challenging 1500 M that saw him get boxed in the inside lane. Benjamin has been a great leader and competitor all spring and it was an exciting way to wrap up a decorated 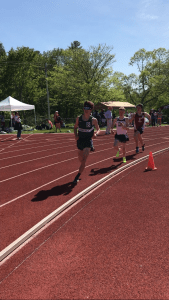 The boys hurdlers, Ossie Heard ’18 and Brian Weber ’18 also showed great potential for next year as both juniors qualified for the 110 M hurdle finals. Both Heard and Weber ended up scoring in the event as they finished 5th and 6th respectively.

The final Deerfield point of the day, was picked up by senior Andres Milmo ‘17 who finished his career with a PR in the pole vault (11-06.00) and earned himself a sixth place finish. Andres worked diligently throughout the course of the week leading up to the meet and it was great to see it all come together for him in the final competition of his career.