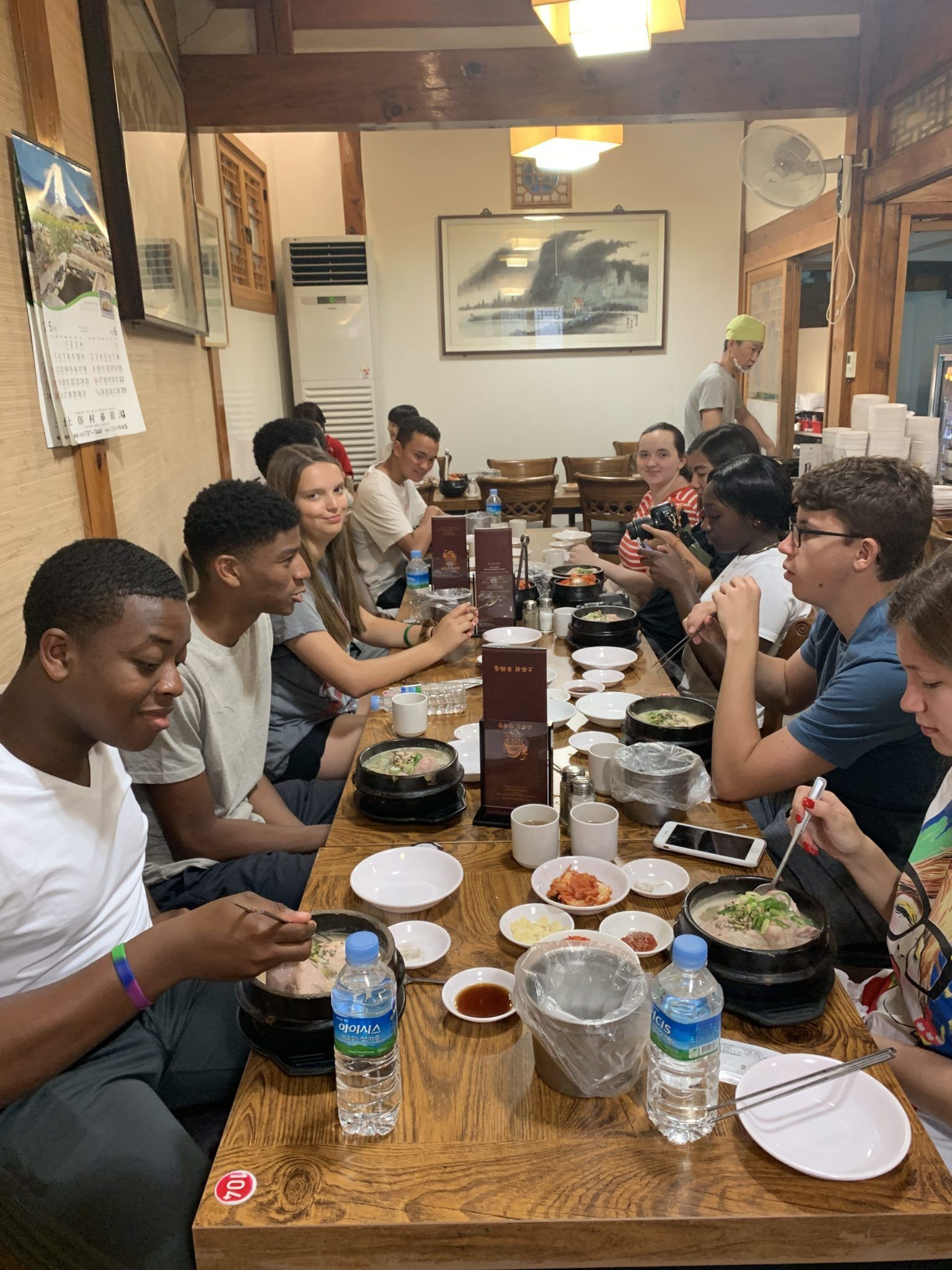 Lily Steinwold ’21 shares a powerful experience while visiting the DMZ (North Korean Demilitarized Zone) and Chase Mathis ’21 describes the differences between Korean and US culture.

After a restless hour on the road, our bus pulled into the parking lot of what would soon lead us to the North Korean demilitarized zone (DMZ for short). Everybody immediately exited the bus and began wandering around; on the outskirts was an amusement park that had been closed due to weather conditions. Around it sat a couple of food stalls and souvenir shops for all of your tourist needs. A few of us decided to walk beyond those attractions up a set of uneven stone steps. In front stood a massive modern building with an observatory at the top, so you could peer down at the wildlife surrounding the Southern side of the border.

But that’s not what I first noticed. I was disturbed by the sounds of screaming halfway to the top of the stairs. The screaming of children filled my ears, and I began to panic. Where was this coming from? What was going on? Is it safe? We were less than three miles from one of the most dangerous countries on the planet, so my mind went to a hundred different scenarios. In front of the big, modern building there were two people holding signs. The signs I could not read for they were in Korean and the people turned out to be wax sculptures, but the sound persisted. It moved on to the sound of a woman wailing and my discomfort deepened. At the feet of the sculptures lay a speaker pumping the cries into the air. The floor that the sculptures stood upon was made up of writing on colorful pages. I was drawn away by the sounds, but in by the colors and, in this odd tug of war, I ended up walking in front of a plaque explaining what it was I was witnessing. It read “The Archives of the KBS Special Live Broadcast Finding Dispersed Families.”

The colorful pages I was standing on were actually posters made to find lost family members. I hadn’t even realized that after the armistice was decreed the creation of the border separated husbands from wives and children from grandparents. This was a monument to those silent victims of the war, of whom only about 10% would ever be reunited with their lost family, and the pain they felt.

Upon reflection, I feel grateful for my own family and how we remain united. I know my fellow group members felt this similar theme of gratitude and today’s trip to the DMZ will continue to impact us and our views of the world around us. 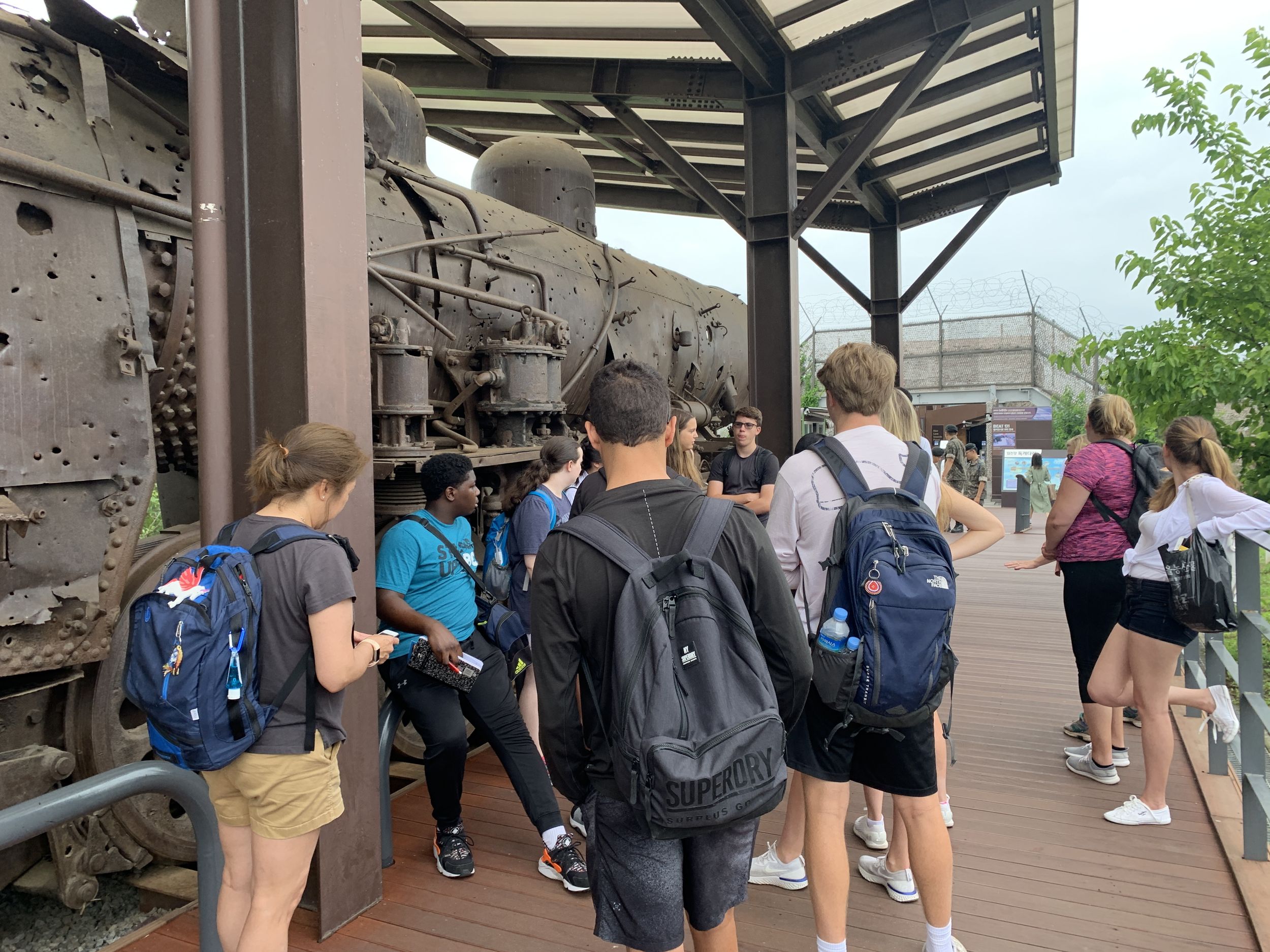 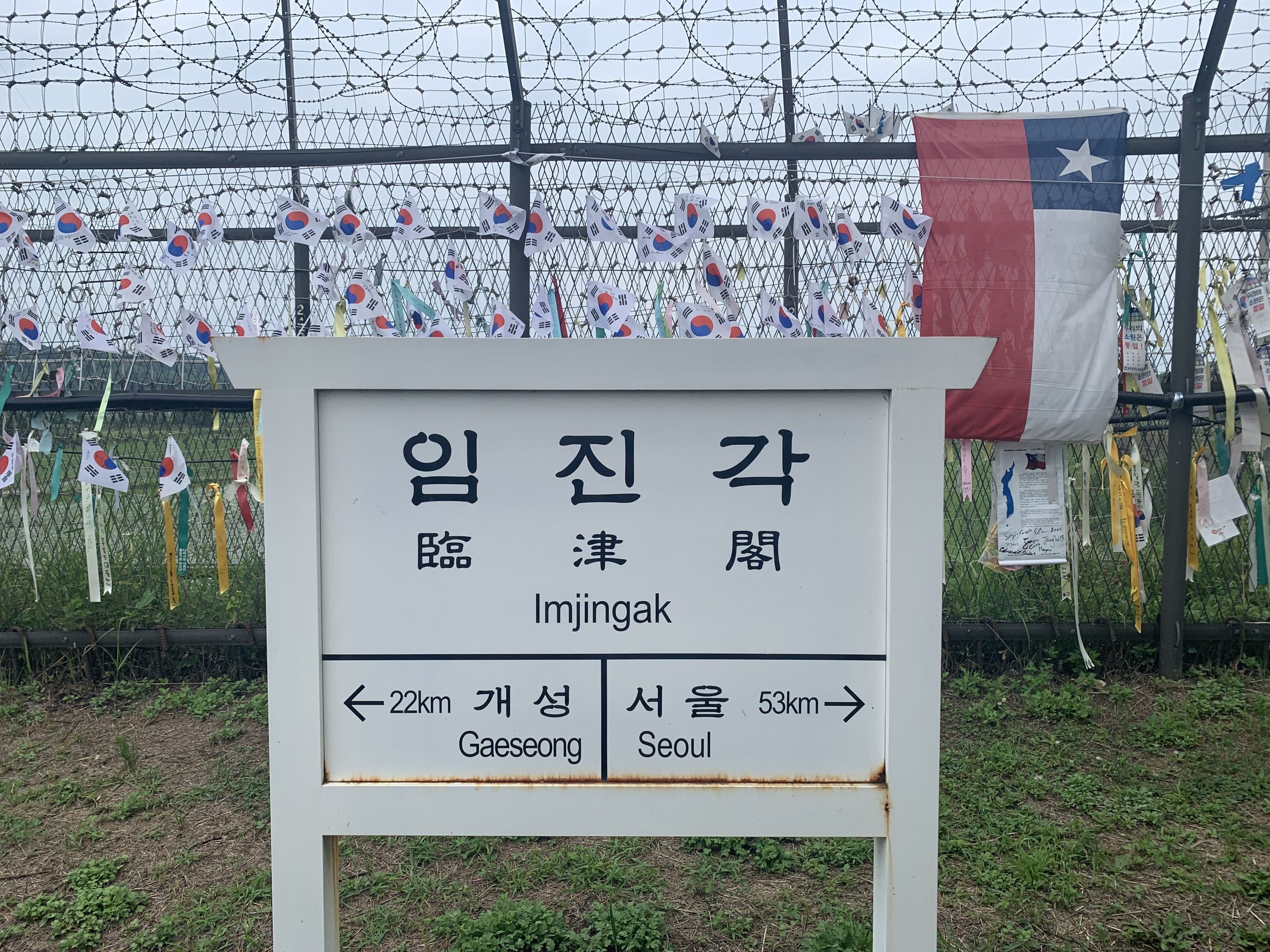 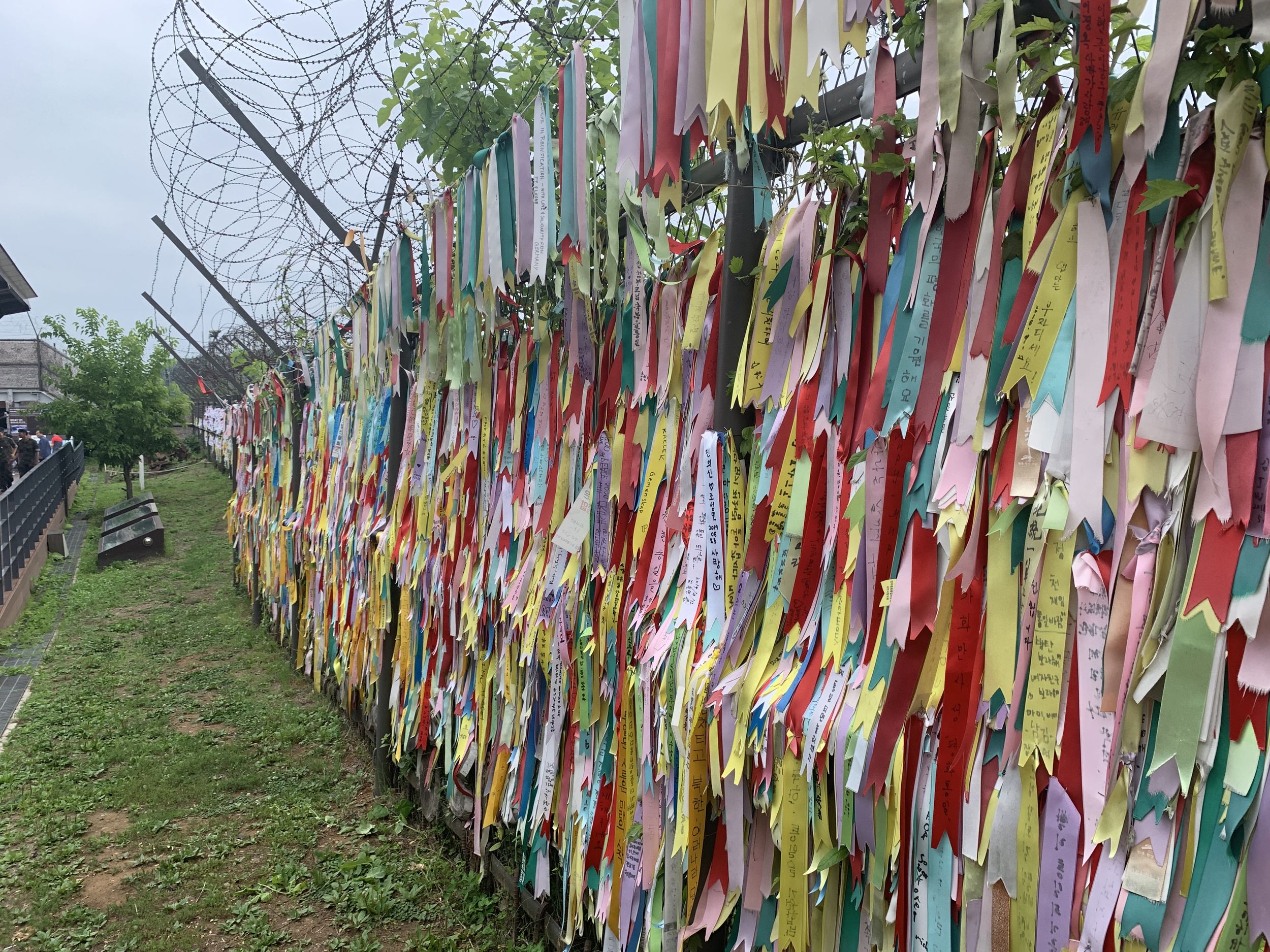 Midway through my experience in South Korea, the Deerfield Group and I have noticed from the first day that South Korea and America are very similar. I even wondered at the start why our group travelled here. Why come somewhere that looks like America? South Korea has huge glass skyscrapers on almost every block, wide streets, and very clean sidewalks. Mixed in between the modern buildings are ancient temples and palaces. The contrast between the two is unlike anything I’ve seen before. Despite the glaring similarities, there are some interesting differences in Korea which illustrate certain key aspects of Korean culture.

The first thing I noticed was the color of the cars. Everywhere were black, white, and gray cars. I thought that it was just me, but our group’s tour guide pointed it out and explained the reason behind it. Korean culture is based around community, and “fitting in”. Therefore red, blue, or green cars are a rarity. The resale value of those colorful cars is too low to make it practical to buy one anyway.

The second difference I began to see later on in the trip, was the lack of trash cans on the street. There are a couple reasons why there aren’t any trash cans. Culturally, Koreans rarely bring food outside of restaurants and cafés. Compared to America’s culture of quick, take out food Koreans enjoy spending their time in the restaurants. Interestingly enough, I ordered Starbucks and was shocked to find that they served the coffee in glass containers, not plastic ones. You will rarely see someone drink or eat on the go here. The second reason why there aren’t any public trash cans is because–in an effort to encourage recycling–Koreans are taxed on how much garbage they have. Therefore, Koreans could cheat the system and put their garbage in public trash cans on the street. Despite the lack of trash cans, the sidewalks are cleaner than any American sidewalk I’ve seen.

The last difference is one I just found out about today. A member of our group asked our tour guide what the foamy stickers were on the sides of the car doors. After that, I noticed the blue foam everywhere. Half the cars on the street had this sticker, sometimes two, on the side of their cars. Our tour guide explained that their purpose is to avoid bumping and scratching other people’s cars while parking and maneuvering. Like I mentioned before, Koreans are collectivists and, therefore, care about their nation and other people as a whole. The spongy blue stickers don’t necessarily protect yourself from getting scratched, but they protect the cars around you when you open your door.

The small differences between America and Korea is what really shows Korean character. Our trip is all about leadership: studying it, seeing it in action, and being leaders. To connect the two topics, I believe is not only important to see the big differences in leaders, but also the small ones. 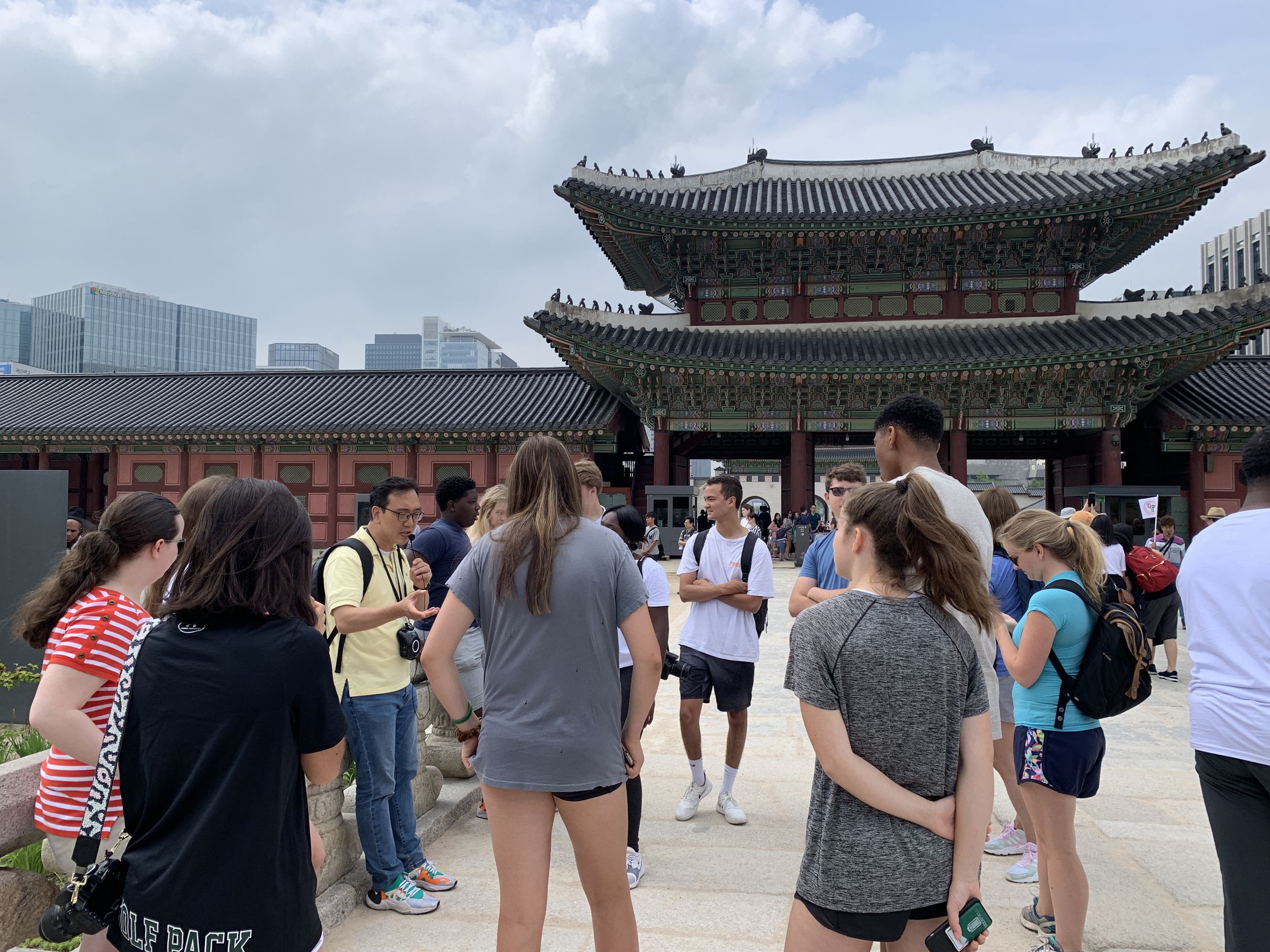 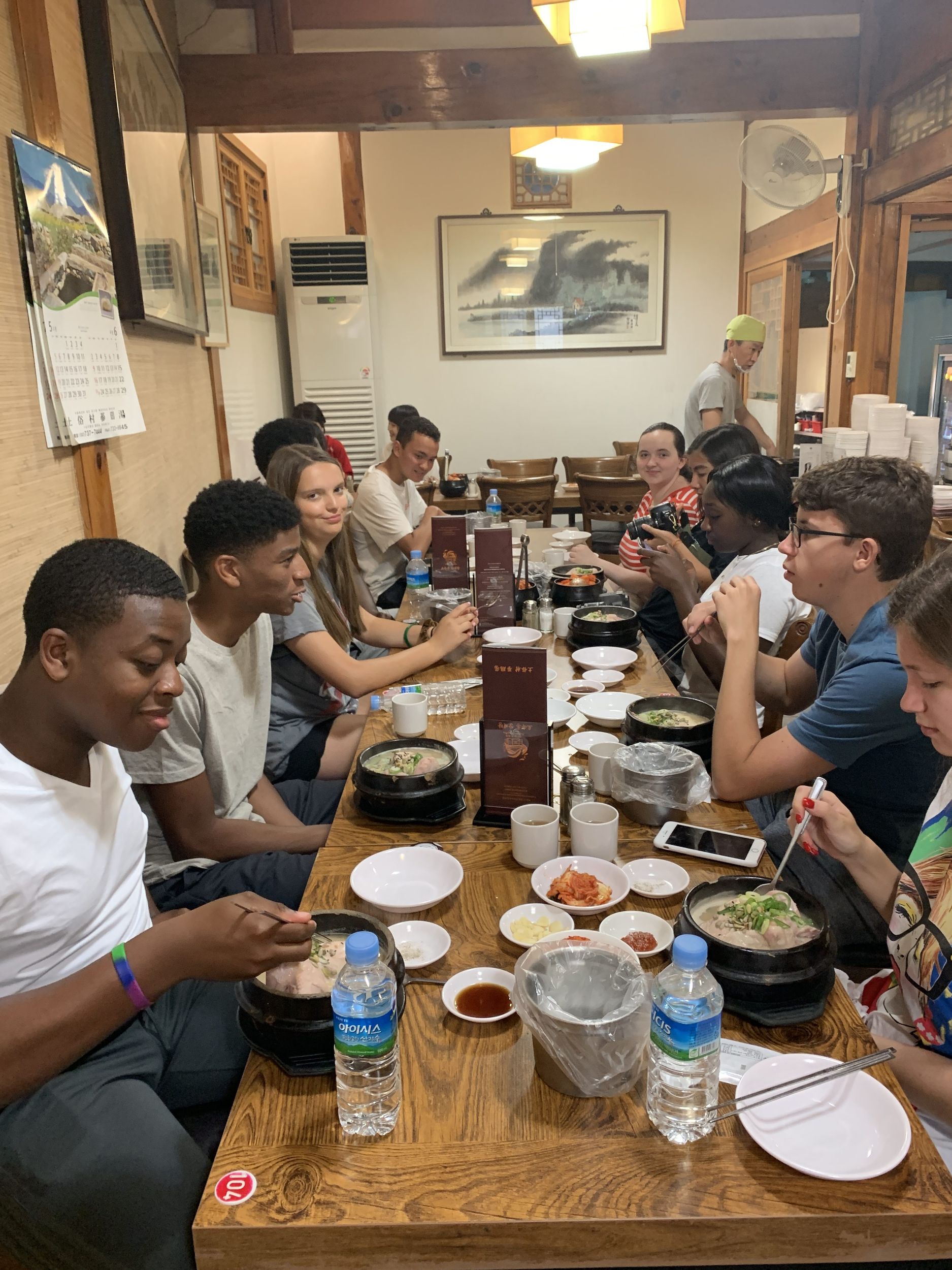 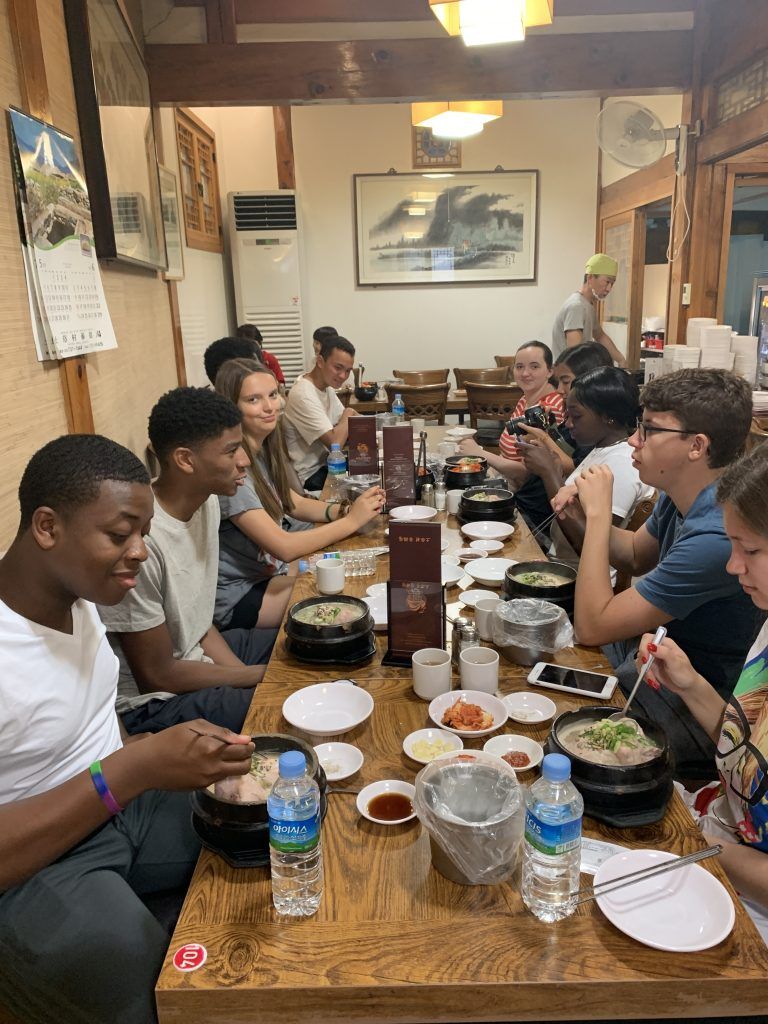