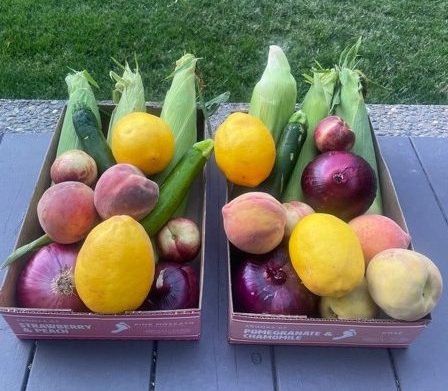 Not far but great in contrast from the wealth of Silicon Valley lies California’s Central Valley, an agricultural mecca responsible for the production of over 25% of our nation’s produce. With fertile soil and access to several fresh water sources (both conducive factors to high crop yield), the Central Valley’s successful agriculture industry is accountable for the employment of more than 800,000[1] agricultural workers. Referred to as the “fruit and nut basket of the United States”, the region produces over 250 crop varieties, generating nearly 17 billion in revenue each year. [2] To put it simply, the Central Valley is one of the world’s most prolific agricultural regions, making its role within the United States agriculture industry extremely critical.

Despite the plethora of fresh food in the Valley, I have found it ironic that those who work tirelessly in the fields to ensure that the produce grown here is available for commercial use don’t have the financial means to supply their families with the same healthy produce they work with every day. Food insecurity rates within the Central Valley are higher than the national average, with about 1 in every 4 children experiencing “a lack of consistent access to enough food for an active, healthy life,”[3] as defined by the USDA.

With this knowledge in mind, I realized that I was in a position to directly address this issue. After spending the entirety of last year’s spring term in Deerfield’s greenhouse alongside Mr. Teutsch, my understanding of farming as well as the process required to produce high quality, organically grown food had grown vastly.

Living in the Central Valley and having access to farmland prompted me to start my summer venture, Food 4 Farmers. With my mission to grow healthy, organic produce for local farming families in Modesto and adjacent towns as well as the help of my grandmother, we were able to plant several vegetables, including tomatoes, zucchini, jalapenos, basil, arugula, and eggplant on our farm. I also picked peaches, nectarines, lemons, and plums from well-established trees. Since most of the fruit and vegetables were ready for harvest by July, I picked them and then assorted them into recycled containers from repurposed cardboard containers. I also raised four chickens and incorporated their eggs into the containers since eggs contain several beneficial nutrients and are highly sought after. In partnership with the Food Initiative of Greater Stanislaus, a local food pantry, I made weekly deliveries of the produce I grew. Though I initially aimed to give the produce specifically to farming families, hence the name Food 4 Farmers, I realized that the need for fresh produce was apparent amongst all demographics, which prompted me to pivot to a greater population.

Since my last blog post, I have organized a healthy food drive at a local business. I set up over 20 food-collection bins throughout office buildings and operating facilities and collected over 75 bags of non-perishable foods for donation to the Food Initiative of Greater Stanislaus. In the 10 weeks of deliveries this summer, I donated nearly 1,000 pounds of produce to the Food Initiative of Greater Stanislaus. This amount of food is estimated to feed over 300 families.

I’m very thankful that the CSGC was willing to work with me and give me the resources to make this project possible. I have expanded my knowledge regarding farming and agriculture even further, and I’ve gained a sense of gratitude from seeing firsthand just how many families in the Valley struggle to eat the same healthy produce I once took for granted.