Yesterday, the Deerfield community gathered for School Meeting to celebrate spring teams and recognize the 2017 spring athletic award winners.  In keeping with tradition, Mr. Howe began the ceremony by listing off his Spring Top 10.

Graduation is close, the big ceremony is near.

But before we go there, let’s talk about the great year.

In March I asked all of you to stay strong and continue to be good.

I’ve been so impressed; you all have done more than I ever thought that you would!

You acted with class, set new standards high off the floor.

You’ve made every day a day that’s great to be a Door!

So let’s start our Top 10 List with an obvious choice;

Our 2017 PGs are the best; they’ve been such a positive voice!

And adding to the awesomeness of this class are some kids who are way more than fine.

They play sports for the right reasons and help younger players in line.

Our seniors on j.v. baseball and all other sub-varsity teams all come in at #9.

Let me tell you about the two baseball managers who are more than just great.

Lindsay Warger and Maddie Blake own their position at #8!

Crazy things happened all throughout the spring;

She, along with a trackster Matt Donovan, get shout outs from coaches for all that they’ve given.

They deserve a place on the list so they come in at 7.

We beat Choate in just about every sport.

At #5, our hats go off to the softball team making the post season for the first time in over ten years.

Ireland, Shai, Shelby, and Caroline helped get us all those cheers.

The lacrosse teams, both boys and girls, did their best to entertain

Wins against Loomis, and overtime thrillers with Westminster and Exeter caused others some great pain.

They’ve become the class of New England lacrosse and they earn spot #4.

Spot #3 goes to the two tennis teams and their New England Tournament bids.

If you ever saw them play you know they are hardworking kids.

At #2 I want to recognize those that always travel away

We almost hosted one race here early in May.

Rowing, Golf and Cycling teams win a lot for us on the road

I offer them congratulations and the thanks they are owed.

And coming in on the top of the class, Athletes of the Week from September to  June

Raise your arms up high, come on raise them high and have a great afternoon! 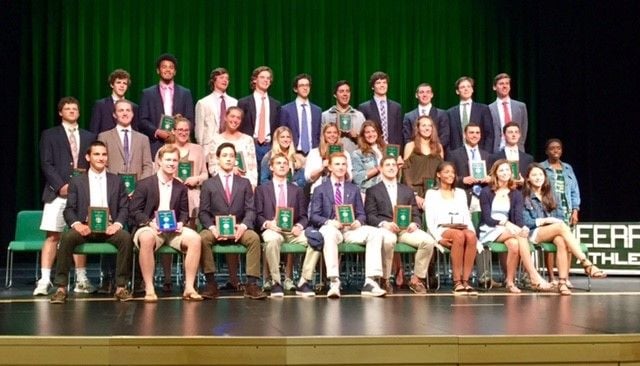 “This award is given to an exceptional golfer who consistently demonstrated passion, commitment, dedication and sportsmanship to the game of golf.  Like Jerry Daly ’72, those named on this trophy displayed integrity, quiet confidence, embodied the true spirit of the game, and as a result had a significant impact on teammates.”

Presented by Alumni for outstanding performance in distance running (awarded at discretion of coaches on a year-to-year basis).

Presented to a senior participant in interscholastic athletics who through perseverance, team spirit and campus citizenship exemplifies the goals of interscholastic athletics and provides a role model for his/her teammates.  The recipient can be an active non-varsity or varsity player, a manager, an injured player or anyone who has continued to contribute to the team through his/her perseverance, as well as interest in and dedication to the team concept.

To the student who has exhibited courage, leadership and sportsmandship on the athletic field.

To that senior student athlete who, by hard work, determination, and loyalty to Deerfield, best exemplifies the qualities of Bob McDermott ’73.

For photos from School Meeting visit our Flickr site. More photos will be forthcoming.