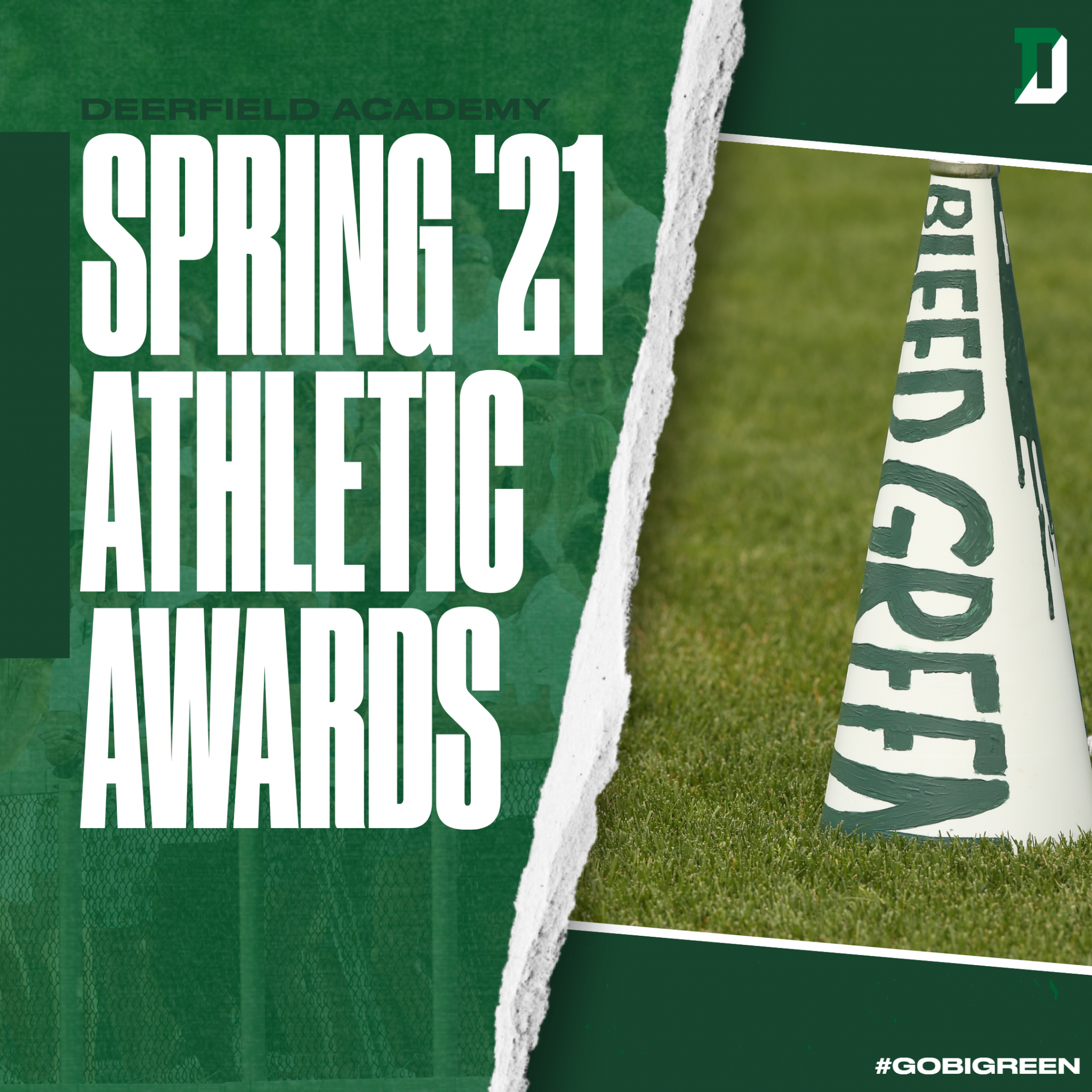 The Deerfield community celebrated the achievements of spring teams and student-athletes at yesterday’s School Meeting.

Mr. Howe shared his Spring Top-10, which was brought to life by several students and Mr. Howe via video from many different places on campus. Following the Top-10, this spring’s varsity award winners were announced.

Happy last days of school to you all! It’s been a remarkable journey for all since the fall.

The class of 2021 will never leave our minds because of this unusual year we shared. Your patience, adherence to the rules showed how much you cared.

When we finally arrived to Spring we saw and felt glimmers of new light. We played games, had performances, dances and things felt more right.

I’m proud of you Deerfield. From students to administration, faculty, staff and all. We’ve won back our campus by patiently answering the call.

I’m so pleased to present this Spring’s Top Ten to you today. I’ve recruited some talent you’ll recognize as we now get things under way.

First up at Number 10 has to be our friends that test us each week. They’ve seen us come through asking for spit or a nose tweak. We have to believe Concentric sent us the best people in their ranks. And we owe them our biggest collective Deerfield thanks!!

You don’t get things done without leadership at the top. You need a person who is relentless and doesn’t know the meaning of stop. Dr. Austin deserves mention here at position Number 9; placing Deerfield in a position to shine.

At Number 8 I want to talk about groups I happen to think are great. Their team first approach is a model for all to duplicate. Their kind of team Ethos comes from the student leadership that is within. Veterans like Pelc, Mudd, Griffin, Leimkuhler, Bourque and others gives baseball its ability to win.
Girls lacrosse also can be considered as a team to emulate. Leaders like Talbot, Sarah, Maddie, Haley, Lilly and Taylor made every day together feel great. Leadership and poise across these two teams is expected to be there. It comes from the seniors who are there because they care.

Coming in at the 7 spot are those athletes playing over on Memorial Drive. Softball has become really good and now the program is back alive. Some highlights this year include a win over Andover, the first in many years; then watching Jessie Rooney strike out the side bringing teams to tears. The team has learned how to win and have fun along the way. It’s a recipe for success and they appear to be here to stay.

There has been so much good news coming from the track. First year head coaches Stallings and Gray have brought their teams back.  Coffin, Gray, Reavis and Ayomanor had blinding speed setting a new time in the 4 x 100 race. Jackson Palmer upped her record Javelin throw and freshman Kaelin Creagh along with my friend Elic ran the fastest 200 times with such grace. There are many non-record breakers on this team that’s so large; taking the spot at 6 recognizes all members of both teams leading the charge.

Boys and girls rowing comes in at spot Number 5. Their time spent on ergs demonstrates their commitment and intense drive. Each day they gather to get on a green bus and take on the challenges of the day. There are 13 seniors this year that helped keep the program strong after such a long delay. Ron Finkelberg, Allison Xia, Daisy Dundas and Ginger Berry are four of these rowers that come immediately to mind. They are kind, compassionate teammates – their replacements will be hard to find!

Coming in at 4 is the voice of the Doors. Mx. Ahbel has been announcing for years and keeping the scores. He’s been helping with football, swimming and track for many a year. What’s special is he’ll tell you his work with our teams has been the icing on his wonderful career. Please thank him when you see him in these upcoming days. His dedication to excellence is deserving of our praise.

It’s too bad that New England Tournaments were postponed for the spring. Our girls tennis would have been there had there been such a thing. With only two seniors, Emma Weech and Evan Burkert, this team is legit. They’ve won most of their matches combining deep talent and grit. Spot Number 3 is their’s, but wait there is more; with such a young team we expect more is in store!

Next up at 2 is a team that should not cause any shocks. Each year they finish high on the board playing their game at Crumpin’ Fox. Led by Will Lodge, who is super – legit, this team has overachieved. In March had I been told what their season would be I’d have felt a bit deceived! The team was unbeaten playing against nine schools in the Northeast. Their reputation as a solid program has increased, at the very least!

Now at the TOP boys’ lacrosse has met many challenges and has fallen onto fate. They’ve beaten the best teams around – proved they are strong – maybe even great. With 12 wins to none the team has had a spring they’ve worked hard for. With a National #1 ranking they’ve made headlines that reflect well on being a Door. Congrats to this team for placing 1st in this Spring’s Top Ten. I’m just so glad all the teams got to compete once again!

Congrats Deerfield! You got this done!

BASEBALL
Arthur S. Williams, Jr. Baseball Trophy – Tyler Mudd ’21 & Tom Leimkuhler ’21
The Arthur S. Williams Baseball Trophy is awarded to that player on the Varsity Baseball team who, in the opinion of the coaches, has displayed competitive spirit and devotion to the game, and whose unselfish efforts on behalf of the team best exemplify those characteristics of Art Williams, coach of baseball at Deerfield from 1938-1970.

Reverend G. Richard McKelvey Spirit Award – Kevin Griffin ’21
Established in honor and recognition of the Reverend G. Richard McKelvey’s 30-plus years of service to the Deerfield Academy baseball program, the annual Spirit Award is given to the player, manager or supporter of Deerfield Academy baseball who has demonstrated a special passion for, and dedication to, the game of baseball.

CREW – Boys
The Coaches’ Award – Ron Finkelberg ’21
In an unprecedented year, this member provided the type of extraordinary leadership the team needed. He is the kind of athlete who demands the best out of himself and, by doing that, he inspires those around him to bring their best.  He has added immeasurably to the Deerfield Rowing program during his time on campus and will be greatly missed next year, but we know the example he set will be long lasting.

CREW – Girls
The Coaches’ Award – Claire Cummings ’21
For her junior and senior years, this member of girls rowing was given far from ideal circumstances in which to co-captain the team.  Nevertheless, the ways she carried herself and managed her role—with selflessness, faith, determination, confidence, and optimism—have not only helped the program get by, but made everyone even stronger and deeper than they were pre-pandemic.  Every person on the squad is better for her influence and we are so grateful to forever call her our teammate.

CYCLING
The Coaches’ Award – Merritt Wurts ’21
Over the past four years, this team member has been a leader out on the road for the cycling team through his competitive spirit and eagerness to do the hard work.  While the last two years haven’t allowed for racing, he has never gotten frustrated but instead has stepped up to ensure that every practice is meaningful and that every cyclist has felt pivotal to the success of the squad.

GOLF
The Jerry Daly ’72 Golf Award – Ben Zimmerman ’21 and Will Lodge ’22
This award is given to an exceptional golfer who consistently demonstrated passion, commitment, dedication and sportsmanship to the game of golf.  Like Jerry Daly ’72, those named on this trophy displayed integrity, quiet confidence, embodied the true spirit of the game, and as a result had a significant impact on teammates.

LACROSSE – Boys
The Benjamin C. Haviland Trophy – Tommy Stull ’21
Presented annually to that lacrosse player who, in the opinion of the coach, has by his constant striving contributed most to both the improvement of himself and of his team.

The Rhodes Cup – Casey Reynolds ’21 and George Panagopolous ’21
To be given each year to that outstanding first year member of the Boys’ Varsity Lacrosse team who, in the opinion of the coaches, best displays the leadership, determination, and dedication of Andrew W. Rhodes.

The Ramsay Cup – Kade Goldberg ’21
Given through the generosity of Roderick McKay Ramsay ’57, the Ramsay Cup is presented annually to the boy or girl varsity midfielder who excels in all facets of that most difficult position.

LACROSSE – Girls
Deerfield Girls Lacrosse Coaches’ Award – Maddie Boger ’21 and Talbot Von Stade ’21
This award is given annually to a member of the team who displays character and discipline both on and off the field and accepts any challenge put before her.

The Benjamin C. Haviland Trophy – Sarah Stonestreet ’21
This bowl is presented in loving memory of Benjamin C. Haviland to that lacrosse player who, in the eyes of the coach, most clearly exemplifies the qualities which were outstanding in his life of dedication to the development of young women athletes.

SOFTBALL
The Deerfield Softball Award – Jessie Rooney ’21
To the player who contributes most to the spirit of and success of the team over the course of the season.

The Holton Sayce Memorial Award – Jimmy Ueland ’22
To that member of the Boys Varsity Tennis team, not necessarily the best player, through his sportsmanlike conduct on the tennis court and by the example set among his teammates, has most nearly exemplified the best that is Deerfield.

TENNIS – Girls
Tennis Coaches’ Award – Emma Weech ’21
This year’s coach’s award goes to a player whose dedication, kindness, and humility cannot be overstated. She has played with heart and won important matches for Deerfield for four years. On multiple occasions she has won tight contests in tiebreakers to clinch the win for her team. Her steady leadership and genuine care for her teammates has been a gift to the program.

1983 Team Award – Elic Ayomanor ’22
To that member of the Varsity or JV Track team who, in the opinion of his peers, contributed the most through his dedication to the team and by his encouragement to others.

1983 Team Award – Ismay Anderson ’22
To that member of the Varsity or JV Track team who, in the opinion of her peers, contributed the most through her dedication to the team and by her encouragement to others.

WATER POLO – Girls
The Coaches’ Award – Sydney Bluestein ’21
The water polo rules this year allowed goalies to move anywhere in the pool, which meant after three seasons of having her teammates’ backs, Sydney was free to lead her peers forward, literally and figuratively. For four seasons, she played and practiced with determined belief in herself and team, always striving to compete with a “strong heart and sharp mind.

Thomas Spater ’55 Award – Ruby Chase ’21 & Francis Gannon ’21
Presented to a senior participant in interscholastic athletics who through perseverance, team spirit and campus citizenship exemplifies the goals of interscholastic athletics and provides a role model for his/her teammates.  The recipient can be an active non-varsity or varsity player, a manager, an injured player or anyone who has continued to contribute to the team through his/her perseverance, as well as interest in and dedication to the team concept.

Congratulations to all of the spring teams and the award winners! 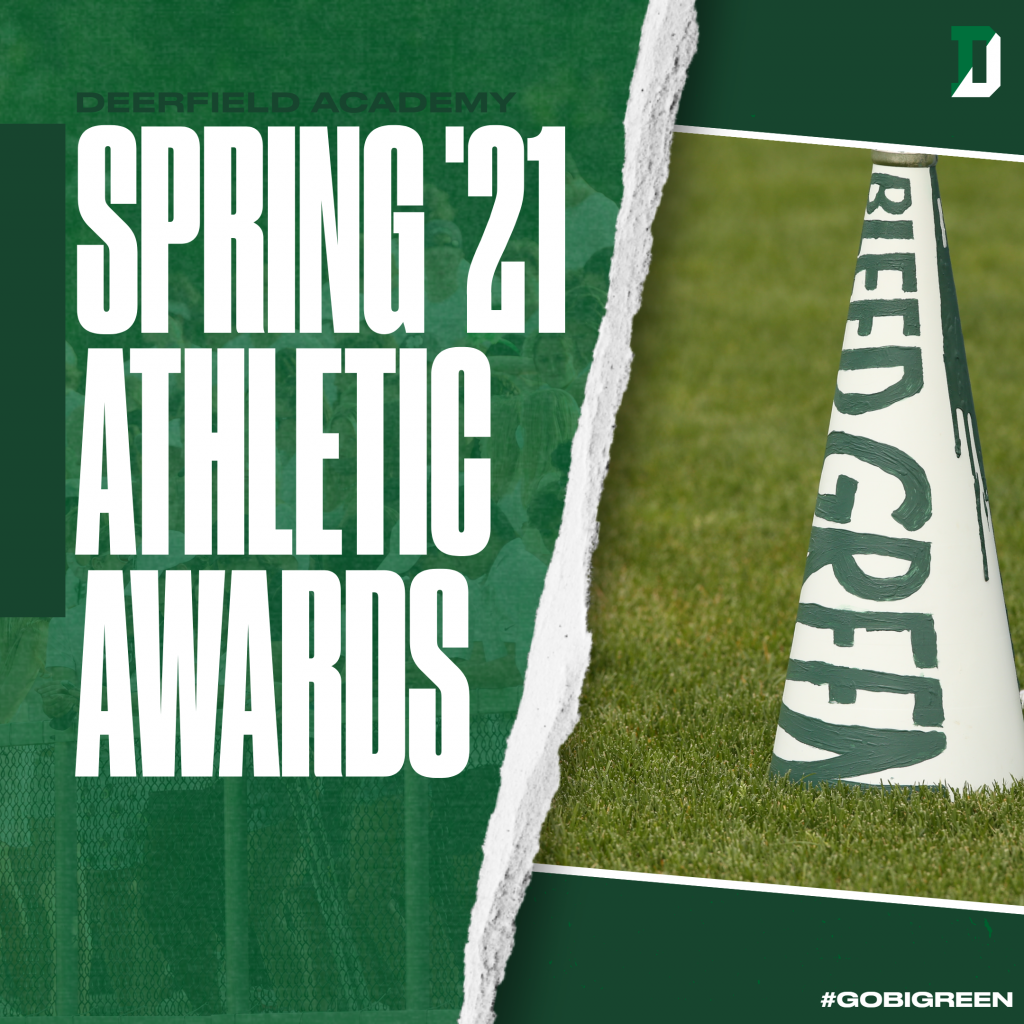