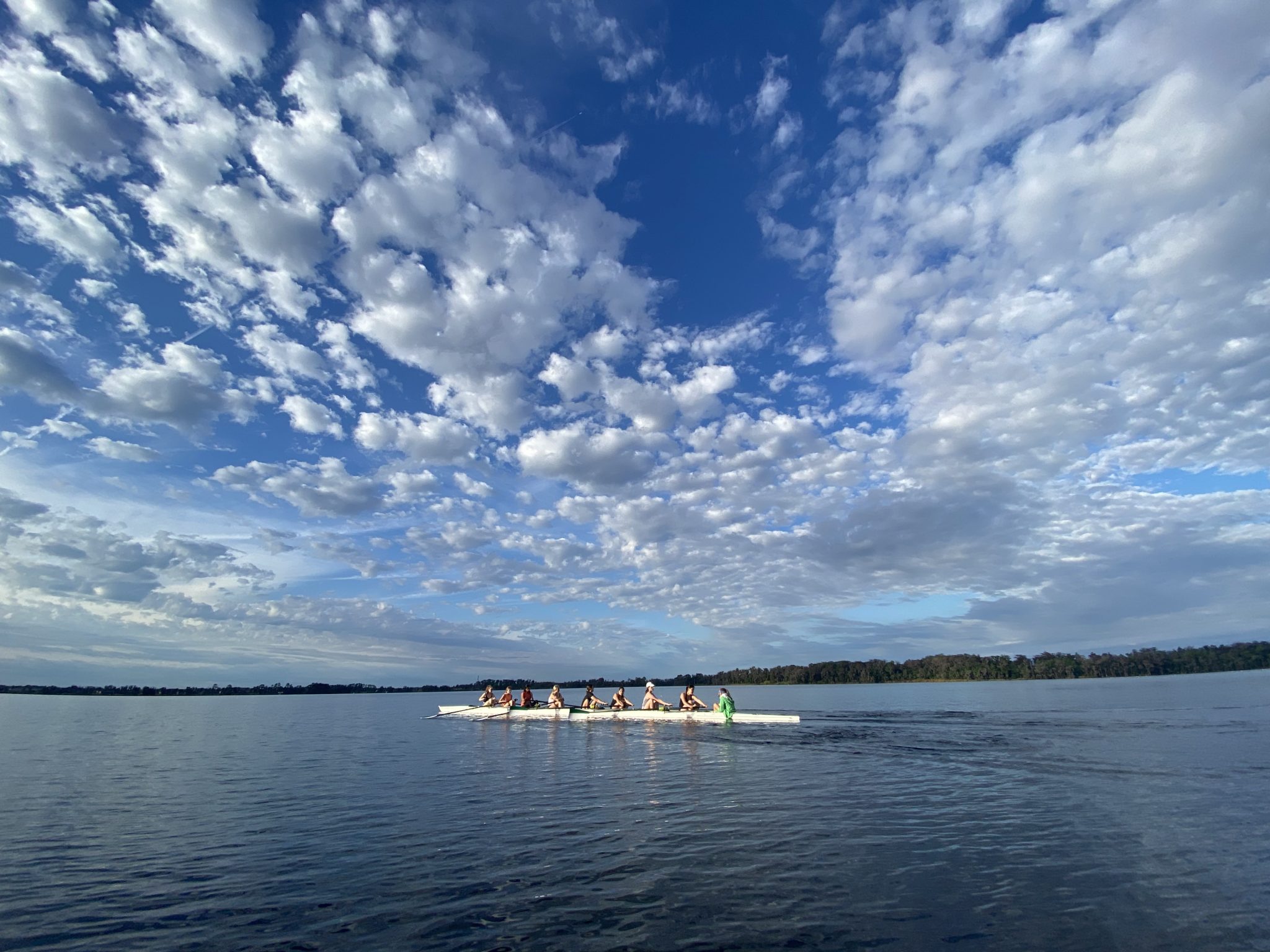 On Saturday, the Deerfield boys’ and girls’ rowing teams traveled to Lake Quinsigamond in Worcester, MA to open their 2022 racing schedule – for the first time since spring 2019 – against St. Mark’s, Brooks, Middlesex and The Frederick Gunn School.

Across all four varsity boats the Deerfield boys and girls crews raced to top finishes, earning a complete Deerfield sweep on the day. Coaches Washburn and Washburn recapped each race below.

G1V
The girls’ first boat of co-captain Nicole Xing ‘22, Rachel Mark ‘23, co-captain Lila Nottage ‘22, Natalie Meyer ‘23, and Larrabee Pollack ‘23 started their race well.  They jumped out to a lead in the early stages of the race before settling into their race rhythm and pace.  Through the middle, Deerfield moved slowly but steadily away from Middlesex and Brooks.  By the finish, DA had established an open-water lead and crossed the finish line in a time of 5:20.  Middlesex placed 2nd with Brooks in 3rd, SMS in 4th and Frederick Gunn School in 5th.

G2V
In the girls’ second boat race, the crew of Lillian Auth ‘24, Olivia Konar ‘22, Georgia Sackrey ‘23, Margot McAuliffe ‘24 and Ashley LaBrucherie ‘23, used a quick start to establish an early margin.  Once ahead, they used a strong middle of the race to establish a commanding lead over their competitors.  Deerfield never let up and crossed the line first, ahead of Middlesex in 2nd, St. Mark’s in 3rd, Frederick Gunn in 4th and Brooks in 5th.

G3V
In the final race of the day, the girls’ third boat of Emi Takegami ‘25, Carson Stultz ‘24, Tatum Lowe ‘25, Fiona Van Nice ‘25, and Jenny Jin ‘24 had to manage a delayed start to their race.  Once the race did start, they were quick to jump to the front of the race and used a controlled and relentless pace to separate from the other crews.  They battled with Middlesex and Brooks in the early going, but were able to distance themselves from these two schools, who were in an evenly matched race for the entire 1500m course.  By the finish line, DA was able to cross ahead of Middlesex in 2nd, Brooks in 3rd and St. Mark’s in 4th.

G4V
The girls’ fourth boat of Charlotte Steffensen ‘25, Alice Zhang ‘24, Elizabeth Richards ‘24, Lily Pierce ‘25, and Mia Senturk ‘24 had a terrific race against competition from Brooks, St. Mark’s and Middlesex.  Rowing best in the middle of their race, this crew moved steadily away from their competition, making the most of the flat conditions on Lake Quinsigamond.  By the finish line, DA had established a significant margin over Middlesex, with Brooks placing 3rd and St. Mark’s School 4th.

Full race results can be found here.  This weekend marked the opening of the Deerfield racing schedule and was the first race for many rowers and coxswains–it was an exciting start for them all!  Deerfield now looks forward to preparing for its upcoming race at Pomfret, where it will face strong competition from Taft, Groton, and Dexter-Southfield, along with the host school, Pomfret.

The second varsity four led the day off as they matched up against strong crews from Brooks, St. Mark’s, and Middlesex.  The Deerfield boat, comprised of Morgan Haisman ’23 (stroke), Charles Richards ’23 (3), Granger Savage ’22 (2), Casey Smith ’22 (bow) and coxed by Darien Chiang ’23, started well and found themselves locked in a good battle with Brooks, who had put together a very aggressive start.  Both crews began to pull away from St. Mark’s and Middlesex, but neither could shake the other.  As the race moved into the second 500 meters, the Deerfield boat slowly began to edge out and established a small lead.  In the final 500 meters, Deerfield was able to add to their advantage before crossing the line with a time of 4:58.5, almost 5 seconds ahead of Brooks.  Middlesex came through in 3rd with St. Mark’s finishing in 4th.

Up next was the first varsity race which featured the Deerfield combination of John Patton ’23 (stroke), Oscar Patton ’23 (3), Nick Gaensler ’22 (2), George Fauver ’22 (bow) and coxswain Lucas Zheng ’23.  This crew was lined up against talented boats from Brooks, Middlesex, St. Mark’s, and the Frederick Gunn School.  Strong starts from all crews saw a tightly packed field in the opening strokes before Deerfield and Brooks began to pull away from the field.  These two boats battled through the first 500 meters before Deerfield was able to establish an advantage in the middle 500.  The crew was able to continue to push out and eventually hit the line with a time of 4:45.3, a little more than 9 seconds ahead of a hard charging Brooks crew.  Middlesex finished in 3rd with a very tight finished between St. Mark’s and Frederick Gunn wrapping up the race.

The fourth varsity followed and featured just two crews – Deerfield and Brooks.  It was another great race that unfolded in similar fashion to the earlier races with both boats very competitive in the opening strokes before Deerfield was able to begin to move to the lead in the middle 500.  The group of Erol Barrett ’22 (stroke), Jamie Weymouth ’23 (3), Johnnie Moriarty ’23 (2), Hudson McGuinness ’23 (bow), and Jackson Collins ’23 (coxswain) continue to push their advantage in the final 500 meters and cross the line with a time of 5:20.9, almost 8 seconds ahead of Brooks.

The racing concluded with an impressive effort from the third varsity four who employed a slightly different race strategy that saw launch off the line and establish an early advantage, which they never gave up.  The crew of Alex Judelson ’22 (stroke), Trey Souder ’22 (3), Finn Broder ’23 (2), Theo Deinard ’23 (bow), and Ginger Bernstein ’25 (coxswain) were aggressive from the opening strokes and never let up.  They hit the line in a time of 4:59.7, almost 22 seconds ahead of Brooks.  St. Mark’s finished in 3rd.

Full results can be found here.

Overall, it was a solid day of racing and exciting for everyone to be back on a race course.  The team looks forward to traveling to Wappaquasset Pond on Saturday, April 30 for their match up with Dexter-Southfield, Groton, Pomfret, and Taft.

In addition to their race on the Pomfret home course, the boys 1V4 and 2V4 will travel to the Saratoga Invitational in Saratoga Spring, NY for racing on Sunday, May 1.

Deerfield rowing is off to fast start this season! 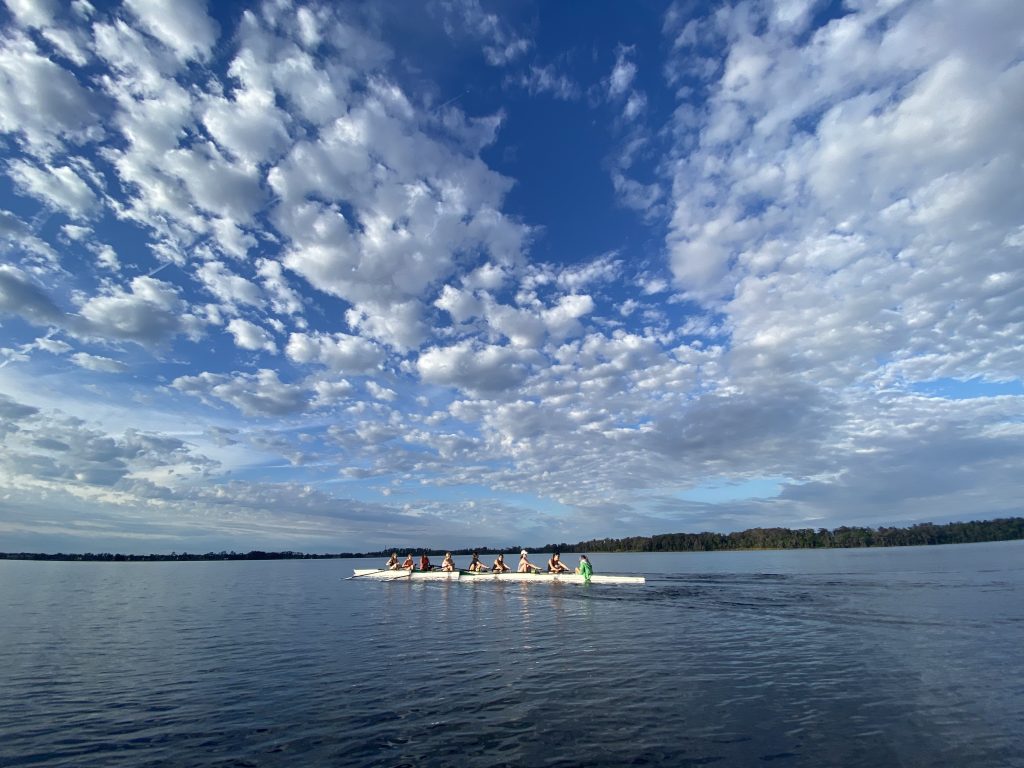