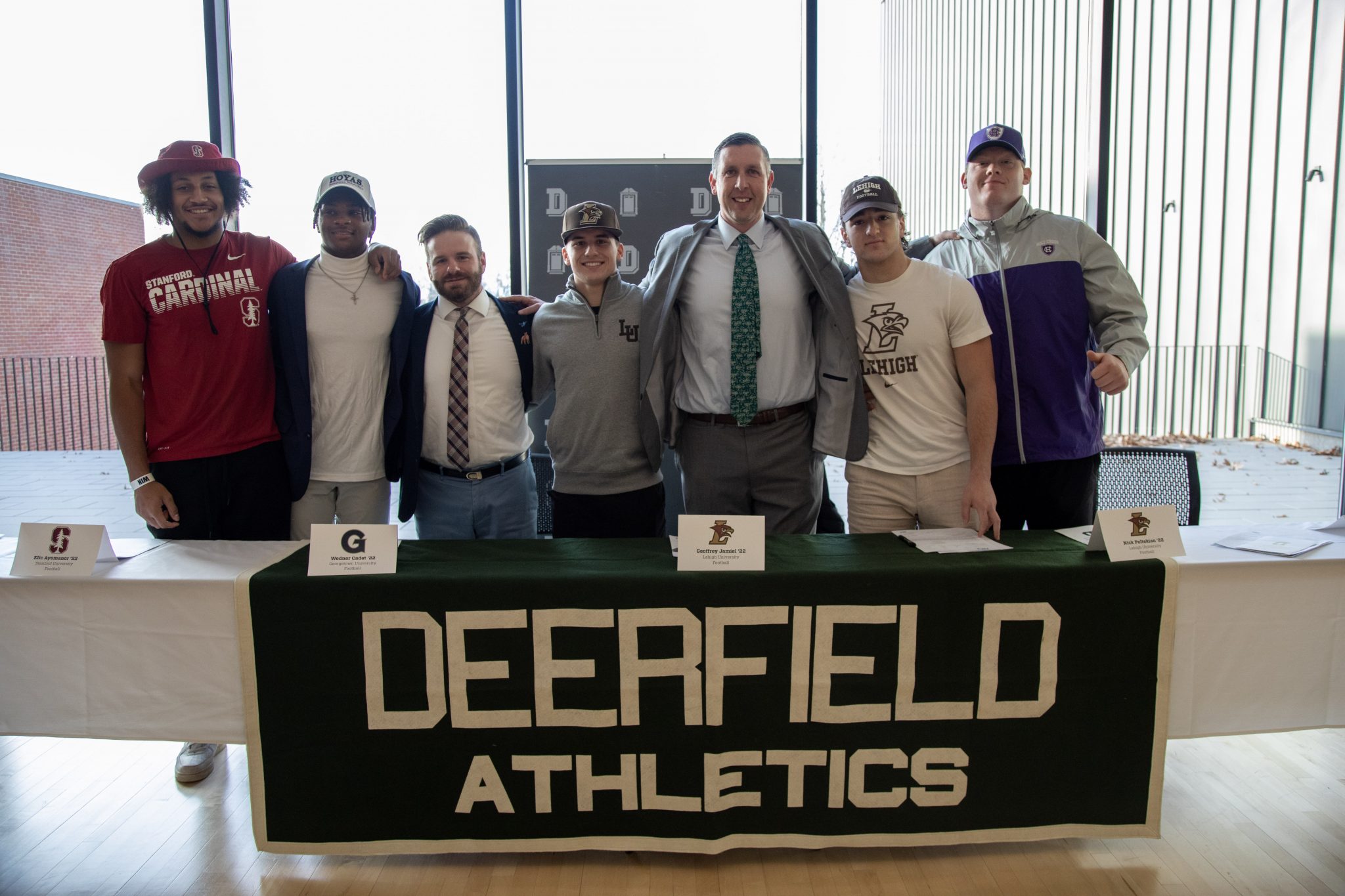 Today we celebrated five student-athletes who signed their National Letters of Intent to continue to pursue their football athletic careers’ as collegiate student-athletes. December 15 isthe early signing period for Division I football.

Watch the replay of today’s signing ceremony and view the photo gallery. 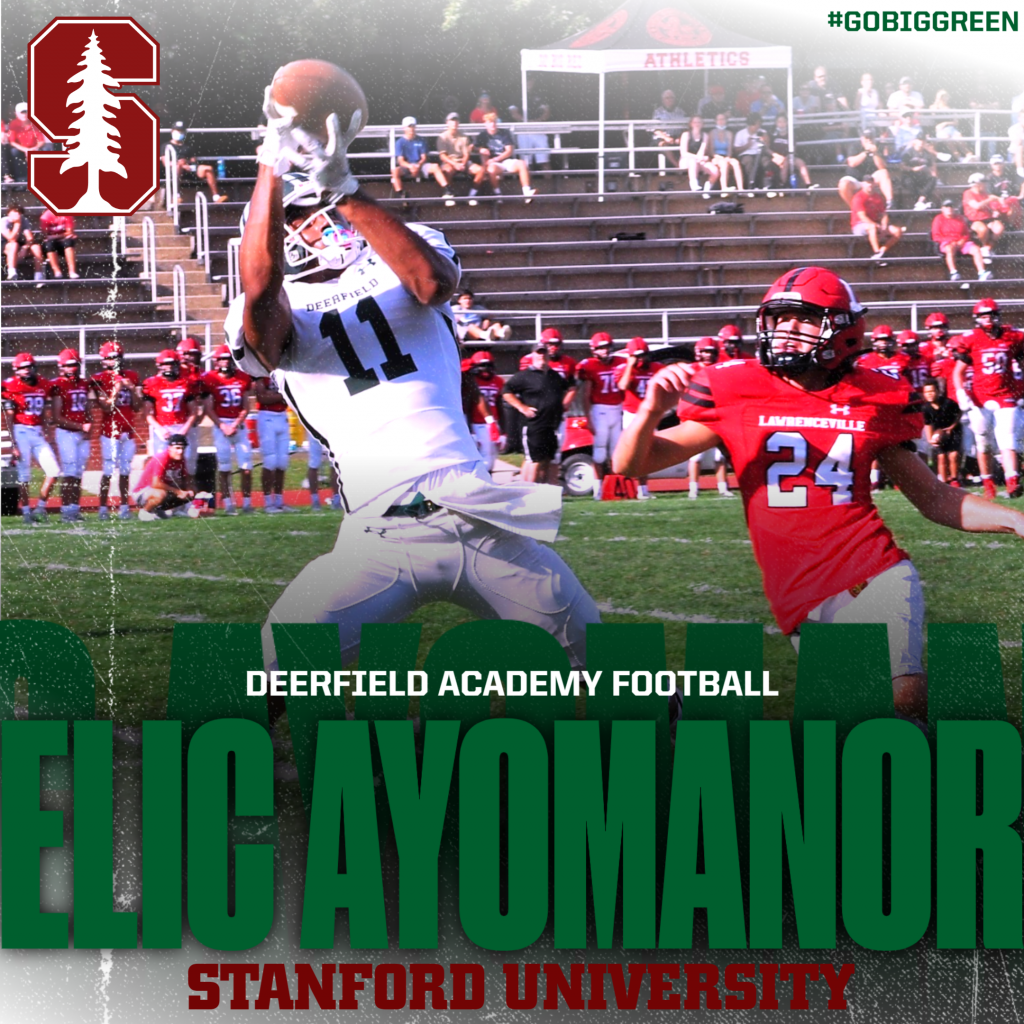 Elic Ayomanor – Stanford University
In his two-years as a student-athlete, member of the varsity football and varsity track and field teams Elic has made an immediate impact on the Deerfield community. He has earned the respect and admiration of both his peers and adults alike through his inspiring work ethic, focus and drive. Elic’s impact started in the fall of 2020 where, despite playing a season without outside competition, he demonstrated his outstanding work ethic and passion for football every day.  He was elected captain following the fall and continued to display that he is an elite athlete with the ability to be an impact football player at the highest level.  Although his senior season was cut short, he demonstrated his abilities to impact games early in the season on the field and continued to be a leader as the season progressed.  Elic’s talents were also evident on the track where he set the school record in the 200 meters as well as the 4×100 meter relay last spring.  Next year, Elic will join Stanford University in the Pac 12 football conference where he will play for head coach David Shaw and receivers coach Bobby Kennedy.  Stanford has a long line of talented big receivers and can’t wait to see him grow and compete in such an amazing program. Congratulations Elic!  We can’t wait to see you shine at Stanford! 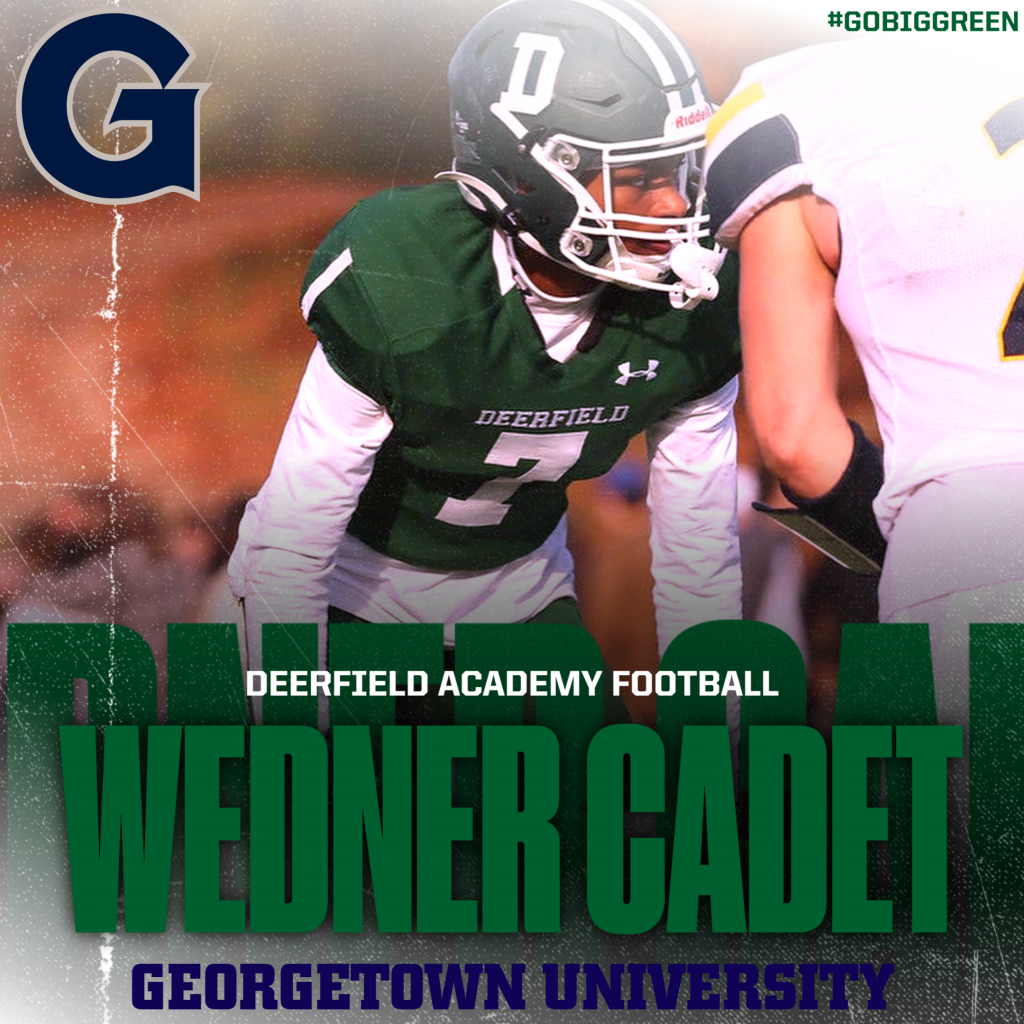 Wedner Cadet – Georgetown University
A post-graduate student athlete from Wellesley High School in Wellesley, MA, Wedner Cadet has made an immediate impact on campus this fall.  He is a smooth and agile athlete with great balance of explosion and skill.  Wedner played defensive back and receiver for the Big Green this fall.  On defense Wedner demonstrated the ability to take over a game by shutting down the opposition’s best receivers each week.  Wedner also was an impact player on the offensive side of the ball with his soft hands, clean routes and perimeter blocking.  He was recognized as a First Team All-New England Class A selection as well as First Team All NE Prep League.  Wedner is a winner whose quiet confidence and coachability are remarkable to see each day.  He is another two-sport impact athlete who is a standout basketball player as well.  Wedner will continue his growth and significant impact next year as a member of the Georgetown University Football Program under head coach Rob Sgarlata.  Congratulations, Wedner! We are looking forward to supporting and cheering you on at Georgetown! 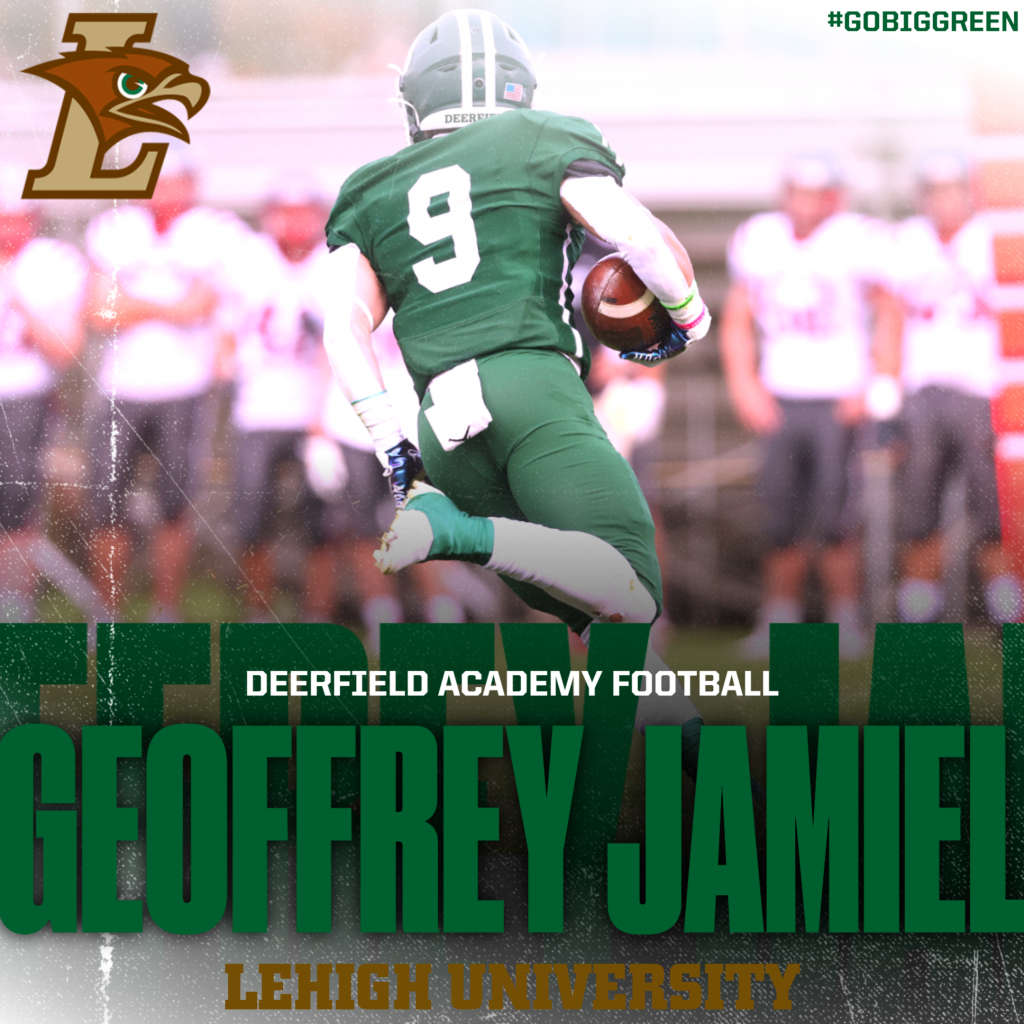 Geoffrey Jamiel – Lehigh University
Geoffrey is one of the most dynamic and productive players in NEPSAC and Deerfield football history.  He was selected as 1st Team All New England and 1st Team all NE Prep as a wide receiver.  He set school records with 67 receptions for 1100 yards 9 TD’s and had 4 interceptions.  Geoffrey also returned kickoffs, punts, played defensive back and was the holder for extra points.  There isn’t much that he can’t do on a football field.  Elected captain after his first fall on campus, he is a constant leader who has the natural ability to positively influence and challenge those around him to be better every day.  Geoffrey is a winner in every meaning of the phrase and his impact on his teammates, classmates, coaches, teachers, children on campus will be missed and felt for a long time to come.  Lehigh University is getting a homerun of a person, football player and student.  We are so excited to see him sign with the Lehigh football program to play for head coach Tom Gilmore next year where he will join teammate Nick Peltekian.  Congratulations Geoffrey!  We can’t wait to see you light up Patriot league! 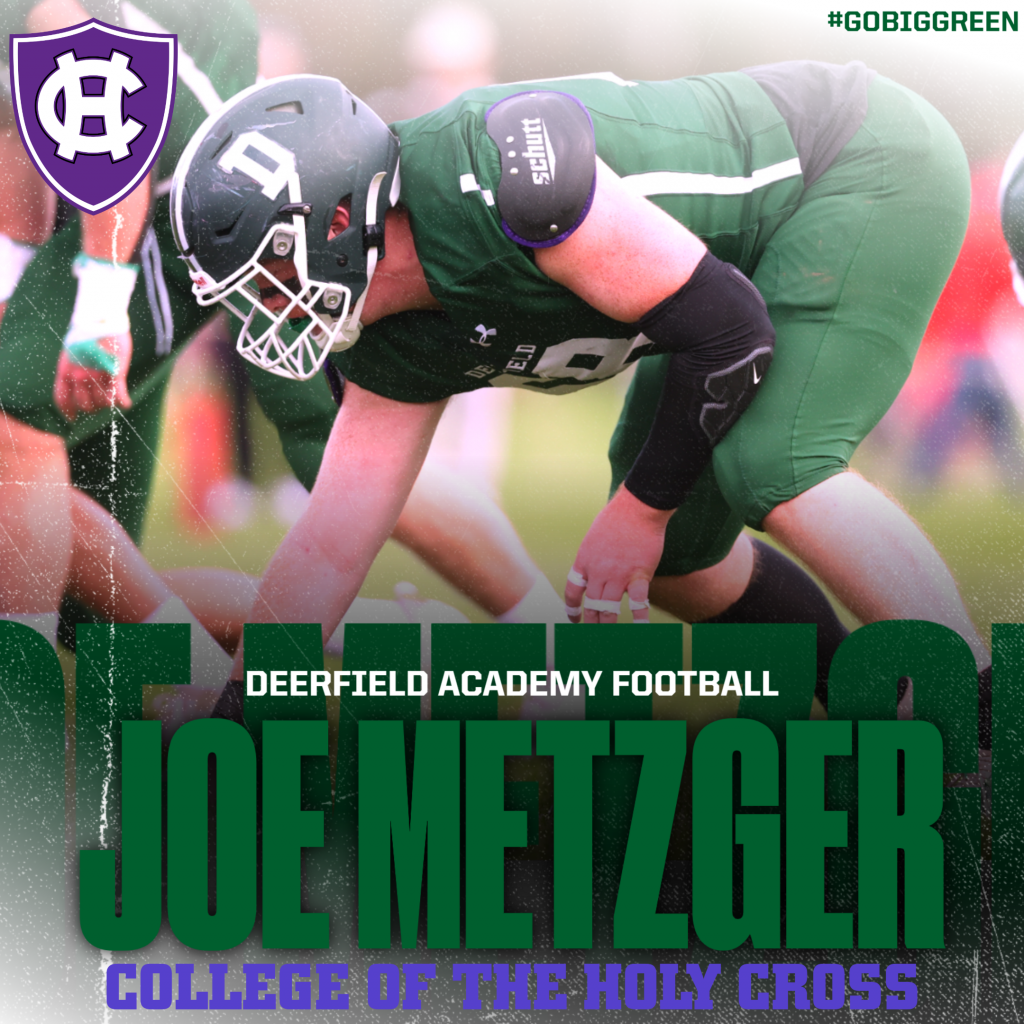 Joe Metzger – College of the Holy Cross
Joe is a post-graduate student athlete from Delsea High School in Franklinville, NJ.  Joe helped to anchor one of the best offensive and defensive lines in all of NEPSAC football this season in route to a 9-1 record winning the Silipo Bowl.  Joe is an explosive athlete with great feet who happens to be big.  His physical run blocks and trust worthy pass blocking paved the way for big plays all season long for the Big Green.  He was also a contributor on the defensive line where he was a problem to block and made many big plays throughout the season.  For his efforts Joe was named First Team All NE Prep League and Honorable Mention All New England Class A on the offensive line.  He is another multi-sport athlete and will continue to compete for the Big Green this spring where he has his sights set on the school shotput record.  Joe is headed to Holy Cross next season to play for head coach Bob Chesney.  Holy Cross is coming off of a Quarterfinal playoff run after winning the Patriot league this year.   Congratulations, Joe! We are looking forward to supporting and cheering you on at Holy Cross! 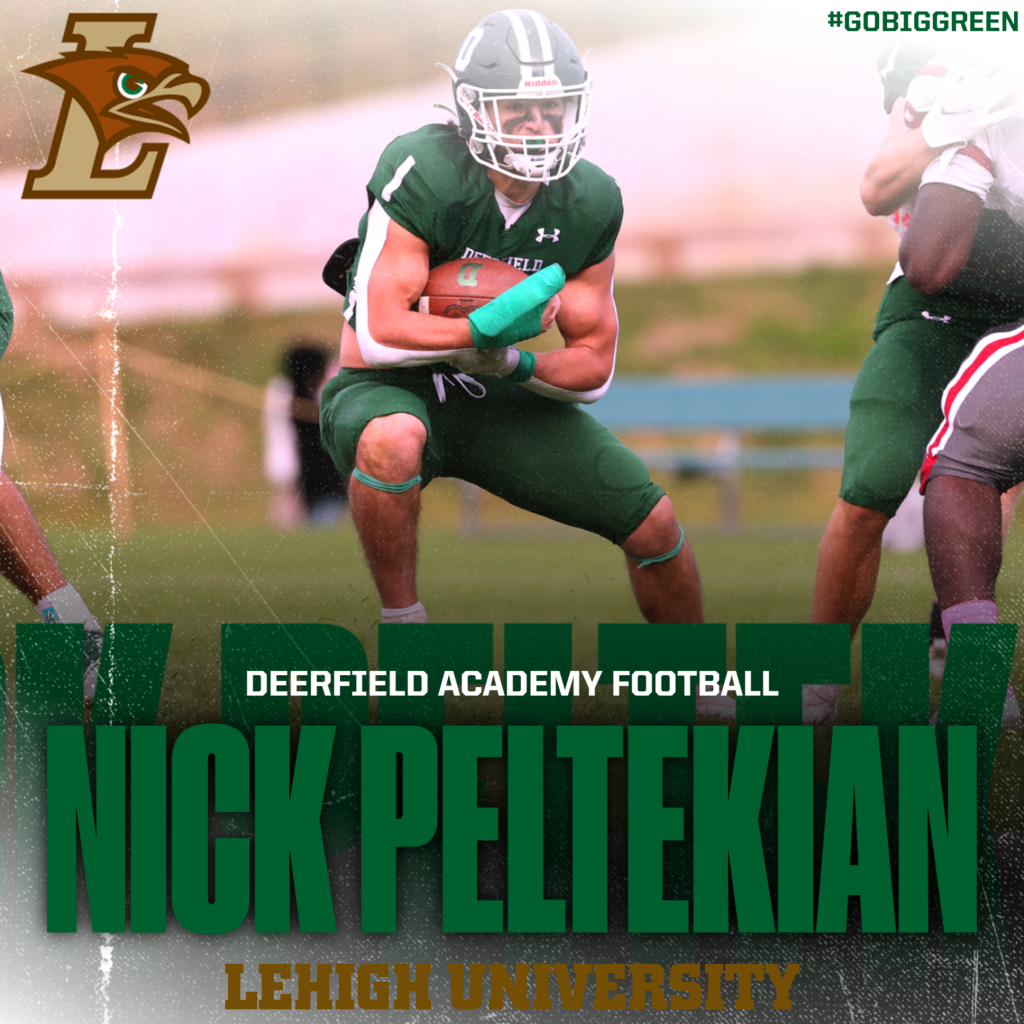 Nick Peltekian – Lehigh University
Nick joined the Big Green in the fall of 2021 as a post-graduate student-athlete, hailing from Mahwah High School in Mahwah, NJ. Possessing the skill set to play on either side of the ball, as a running back and safety, Nick made an impact this fall as a two-way starter for the 9-1 Bowl Championship Varsity Football team.  As a running back Nick was selected as a First Team All NE Prep league as well as earning Honorable Mention All-New England Class A. Offensively Nick paced the team with 73 carries for 732 yards and led the team in TD’s with 12 including an interception return.  He also proved to be an impact player for this year’s stingy defense where he contributed 44 tackles, 4 interceptions and a blocked punt. In addition to his versatility on the football field, Nick is a stand-out two sport varsity athlete in basketball and football. Next year, Nick will join the Lehigh University football program under head coach Tom Gilmore where Nick will join current Deerfield teammate Geoffrey Jamiel next season. Congratulations, Nick! We are looking forward to supporting and cheering you on at Lehigh!

Congratulations to today’s signees. We look forward to cheering you on at the next level! 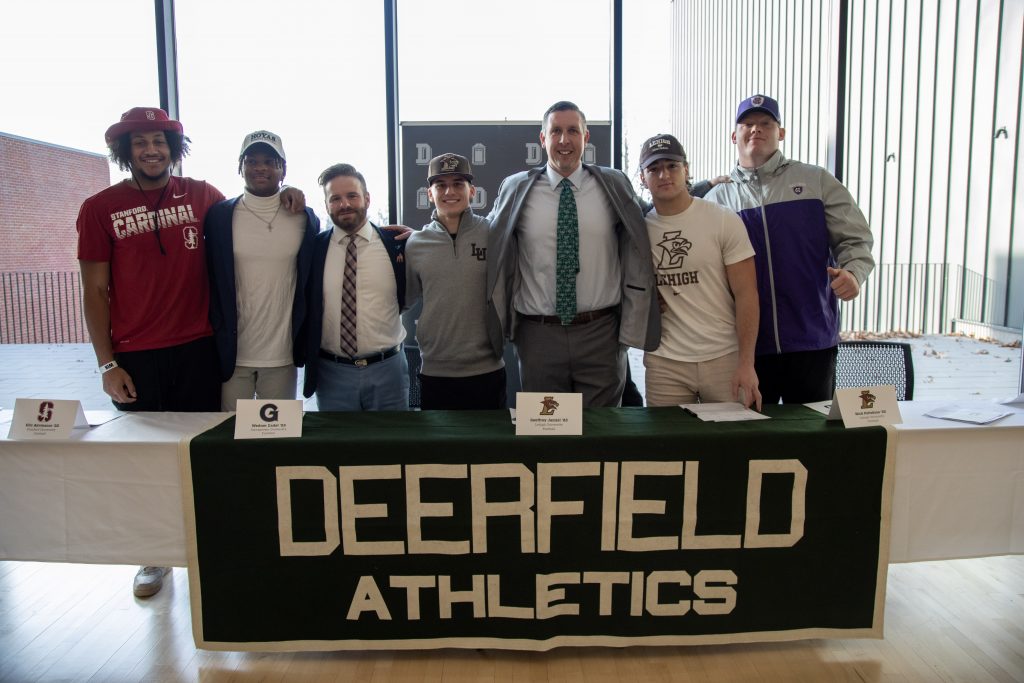