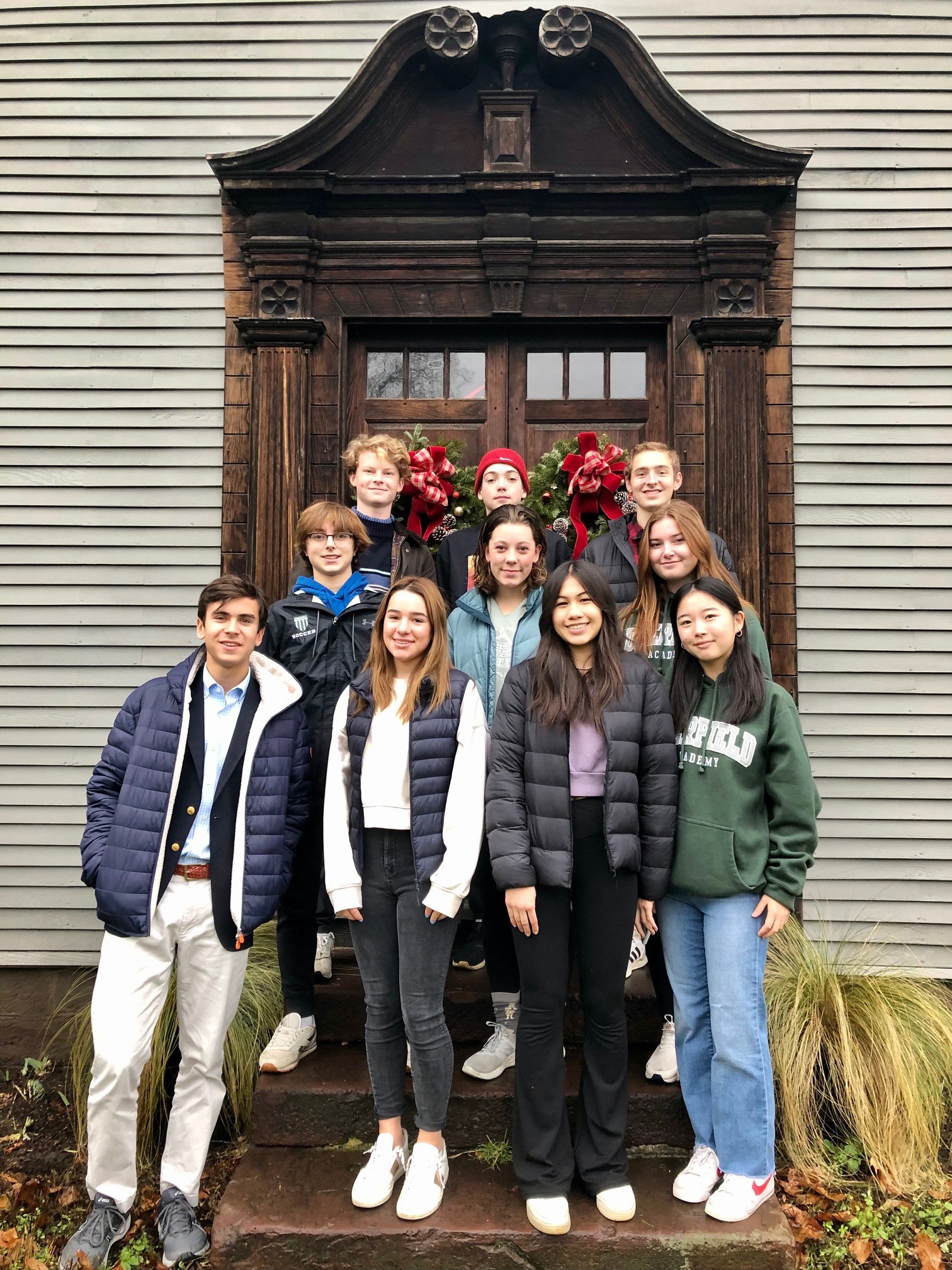 Rec Hockey: Vivi Gonzalez ‘25
The rec hockey DOTW is Vivi Gonzalez ’25. Vivi is new to ice hockey and is working hard to learn how to skate. She has a great attitude and is willing to try whatever you ask of her. We love having her on the team and look forward to skating with her the rest of the winter!

Girls Varsity Hockey: Chase Cherewatti ’22
Our Door of the Week is Chase Cherewatti ’22, who stepped up when the team needed him, and played in net for our 3v3 Tournament on Saturday. Chase had great hustle and team spirit; he did a phenomenal job, saving almost all of the shots he faced on breakaways. We are so appreciative of Chase for his effort, positive attitude, and willingness to help out the GV program!

Girls JV Squash: Emi Takegami ’25 and Stella Fierro ’23
Girls JV Squash players Emi Takegami and Stella Fierro earned this week’s DOTW nomination for their hard work.  Both girls played two matches against opponents from Milton on Wednesday, December 8th, and they won each of their matches.  In addition, they stayed a little bit after official practice had ended to practice their rails, and they supported their team-mates during their matches.  They’re welcomed additions to this year’s team!

Boys Varsity Squash: Christian Capella ’25
The DOTW of the week goes to Christian Capella. He was down 2-1 and 10-7 in the fourth game. He fought off-three match balls and won 12-10. He went on to win the fifth game 11-4!

JV Swimming: Ella Davies ’24
JV swimming is happy to nominate Ella Davies as a Door of the Week.  Ella’s positive attitude and determined work ethic shine through in practice.  She is a quick study, adding skills on a daily basis and is determined to excel.  She is steadfast in her efforts, even when the practice is especially challenging.  The team is off to a great start due to strong athletes like Ella!

Boys Varsity Hockey: Isaac Abbott ’22
The BV Athlete of the Week is Isaac Abbott. Isaac has been a steady presence on both ends of the ice and lets his actions do the talking. He has set a terrific tone for us for the first few weeks of the season and is poised for more success in the months ahead.

Girls Swimming & Diving: Mia Senturk ’24
“The Orange Award this week is going to someone who is always really positive on deck.   She is always cheering for people and giving high fives to her lane-mates after each set.  She pushes herself to make every interval at every practice which is really inspiring, especially if you get to swim in her lane.  This week’s Orange Award goes to Mia!” –Elizabeth Kelly

Girls JV Basketball: Cori Scagel ‘25
Cori played both ends of the court with heart and drive. She was the high scorer as point guard during the last game against St. Paul’s where her rapidly improving floor sense really helped set up moves for herself and her teammates. She will be a player to watch in upcoming games! Cori’s stamina is impressive and she is always ready to try something new.

Boys Thirds Squash: Finn Knight ‘25
Finn has been a wonderful presence on the boys thirds squash team. He came into the season with great squash experience and, even better, a great attitude. He’s eager to try out new drills and bring less experienced teammates into the fold. Finn has also emerged as a leader for our team. At our first game, he volunteered to introduce his teammates by name and year, showing his familiarity with his teammates only a week into the term. We’re excited to see Finn grow as a player and continue bringing a positive demeanor to the courts!

Boys Varsity Swimming & Diving: Levi Tipton ’24
Levi is now in his second year with the varsity program and always shows palpable enthusiasm and excitement with the sport.  Levi’s swim IQ is extremely high and his work ethic is exemplary.  He sets an example each day in practice with his dedication to the sport that is motivating for all of his teammates.  Levi is thrilled to be once again swimming in a year with “normal” meets.  As Coaches, we are just as enthused to see what Levi will accomplish in his sophomore campaign – we know it’s going to be a fun ride.

Wrestling: Kathrine Margulis ‘24
The Varsity Wrestling Door of the Week is Kathrine Margulis ’24. Wrestling a tri-meet can be grueling. Facing two opponents in one afternoon—especially in front of the home crowd—takes not only athleticism, endurance, and flexibility, but also great concentration, determination, and grit. On Saturday, 11 December, Deerfield faced powerhouse Belmont Hill and rival Choate Rosemary Hall. Kathrine suited up for Belmont Hill, mentally prepared for a match but talking a forfeit. Against Choate, she sprinted to the center, owned the whistle, and dominated her opponent, winning a 14-9 decision. The crowd went wild. Kathrine’s sense of purpose, humility, and love for grappling are an inspiration!

Boys Thirds Basketball: Jonny Scagel ’25
The DOTW of the week for boy’s thirds is Jonny Scagel. Jonny has played well in our two games so far, averaging 6 points per game and frequently handling the ball as the point guard. Additionally, he hit 2 clutch free throws with only a few seconds left in our scrimmage against Loomis last Saturday to turn a 1-point deficit into a 1-point win. We have no doubt that he’ll continue to be a leader on the team and a strong contributor.

Boys JV Squash: Jack Willett ’23
Jack is one of our junior leaders on this deep team. He has been an intense competitor and a leader by example on and off the court. His teammates recently voted him co-captain and I see his quiet style of leadership emerging day by day. He has pushed himself in practice to get the most out of drills and sprints. He has taken the challenge matches seriously, but also as a supportive teammate. I hope his balance of intensity and humility will spread through the team.

Girls Varsity Basketball: Avery Burns ’22
This week’s athlete is Avery Burns’ 22. New to Deerfield this year, Avery immediately displayed her tenacity, strong basketball skills, and focused desire to keep developing as a player and teammate. As a point guard, she has a wonderful ability to read the court and has set the tone for our team’s offensive play. Coming off of our first game, Avery’s presence on the court was commanding to all present and contributed immensely to our team’s success. 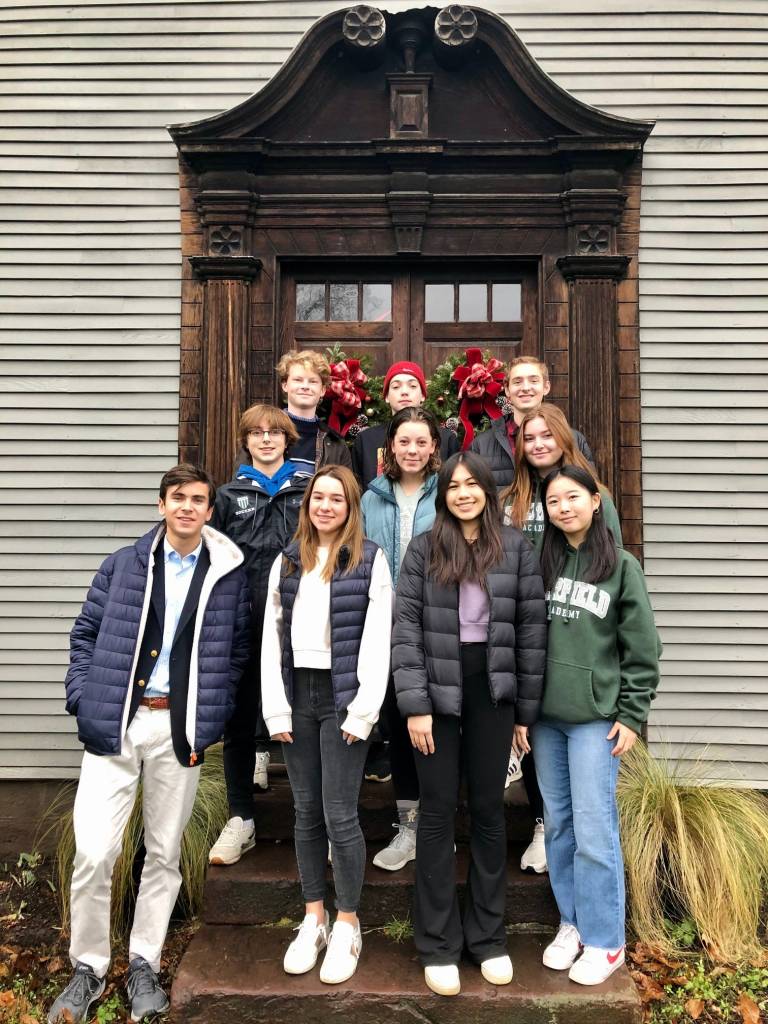