The Girls Varsity Cross Country team capped off their historic undefeated season with a 1st place finish at the New England Prep School Championship meet on Saturday, November 11th. The team traveled to Wallingford, Connecticut and won the Division I meet with a historically low 34 points. For the first time since 2012, the top five girls on the Deerfield team were awarded All-New England honors.

Each DA runner performed magnificently and ran the equivalent of, or close to, a personal record on the incredibly challenging Choate course. The race conditions were prime for good performances, with a bright sunshine filtering through the trees and a cold snap of a breeze keeping the competitors cool as they hammered the trails, fields, and significant hills. 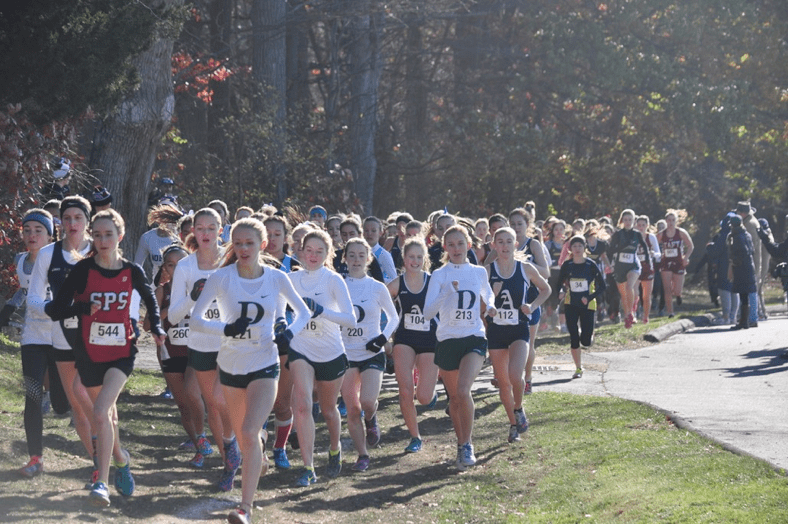 Deerfield was led by tenth-grader Victoria Patterson ’20, who boldly took the race lead in the first mile loop, but eventually succumbed to the strength of a nationally ranked St. Paul’s senior. Nearing the finish, Patterson, was able to vanquish all other competitors, finishing second with a time of 18:38. Following her was ninth grader Noelle Abeyta ‘21, who dueled it out in the last mile with Andover’s second runner. Assigned to run with her and pass her in the last mile, Noelle did just that, passing her with two hundred meters to go in the race. Not to be outdone, the Andover girl then passed Abeyta back. But, with one final valiant effort, Abeyta outleaned the Andover girl at the finish line to beat her by a fraction of a second and record a time of 19:01.

Following Abeyta was senior Erin Hudson ‘18, who finished with an identical time, 19:22, to last year’s championship meet. Fellow senior Sarah Jane O’Connor ’18  had a similarly excellent run, finishing tenth overall with a time of 20:07 in what was probably the best race of her career to-date. Helen Downes ’18 wrapped up the top-five scorers in the varsity with a monumental 12th-place finish and an incredibly impressive time of 20:12. Ninth-grader Grace Russell ‘21 ran an extraordinarily gutsy race, finishing as the sixth Deerfield competitor with a time of 21:04, which would have made her the top runner overall for two of the other varsity teams. Following Grace was Esme Benjamin ’20 who clocked in at 21:19 and bravely battled a strained stomach muscle.

The JV squad similarly exceled, placing third behind the impossibly deeper and larger schools of Exeter and Andover. Led by a courageous Jane Mallach ‘20 (21:30), who took the race out from the start, the team included senior captain Nora Markey ’18 who rocked a 21:56, Erin Howe ’20 who audaciously charged down the last 500 meters to pass a handful of girls, a fleet-footed Ely Burke ’19 who illustrated in no uncertain terms what turnover at the end of a race is all about (22:34), a similarly fleet-footed finisher in Sofi Sintes ’18 (22:56), a dutiful soldier of a runner in Sami Dulam ’21 (22:58), and a plucky Gemma Bishop ‘10 (23:26) who showed us all what running with heart means. This powerful JV squad would have finished ninth in the varsity race, missing eighth by two seconds, which is a testament to how hard these girls competed.

Winning the New England Championship was a fitting capstone to an undefeated regular season for the Deerfield girls cross country team. All of the 2017 Deerfield runners have certainly left their mark on the program and will inspire the next generation to come.

Congratulations to the entire girls varsity cross country team on your championship and your undefeated season!