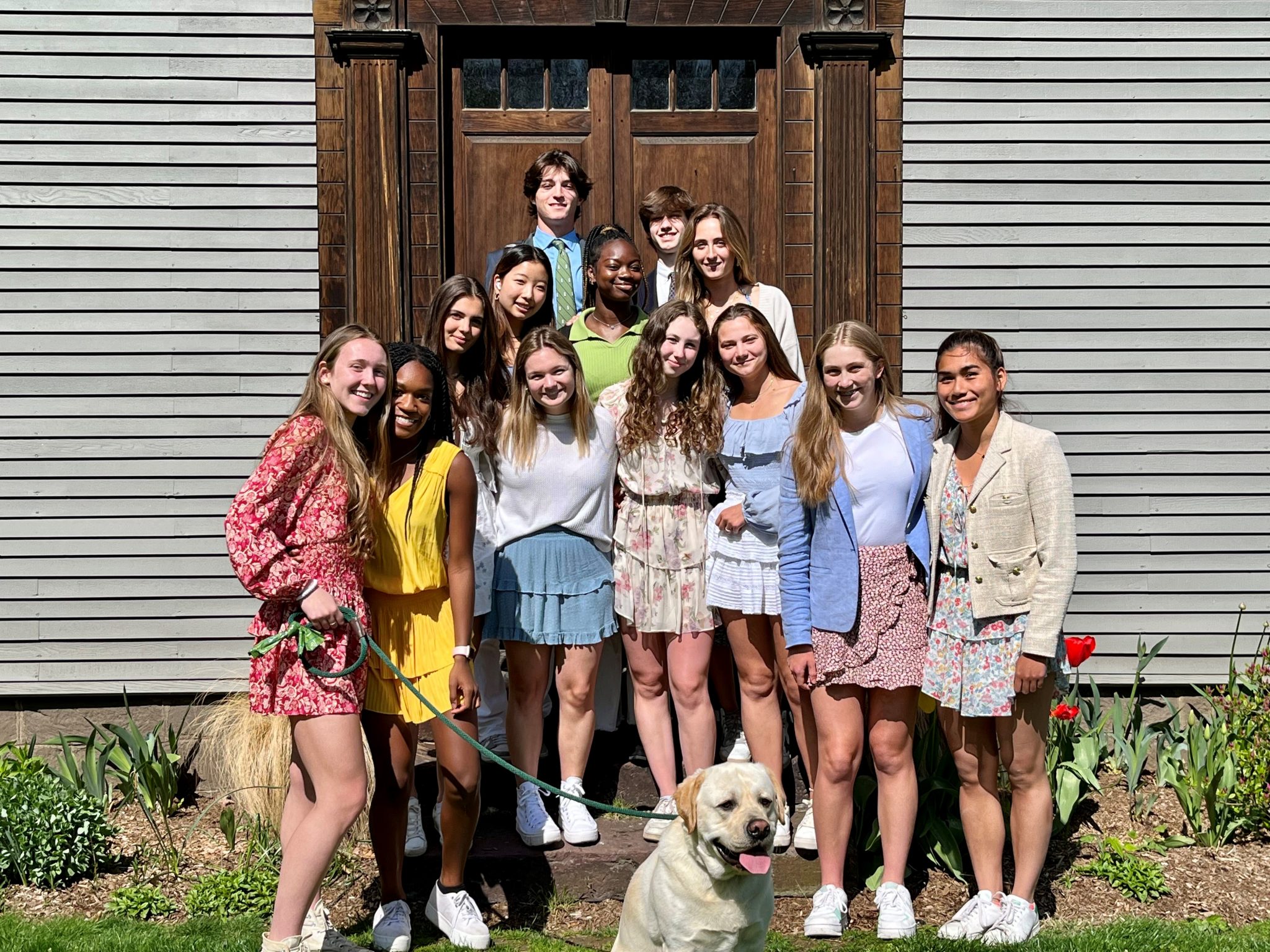 Boys JV Tennis: Gabe Zaccheo ‘22
Gabe Zaccheo ’22 is the DOTW for boys JV tennis. Playing in his first singles match of the year, Gabe beat his opponent in a dramatic tie-breaker 8-8 (7-4) to clinch the overall match for Deerfield. With several of the other matches concluded, Gabe had several spectators for the tie breaker and rose to the occasion. Well done Gabe!

Varsity Softball: Kelly Howe ‘22
Kelly has been playing superb defense at 2nd base all season long.  She dives for ground balls, runs hard for pop flies, and makes outstanding throws – sometimes after diving onto the ground to make a play!  Kelly is focused and consistent – whenever the ball is hit to her, we trust her to make a great play in support of her team. During our game vs. Williston, Kelly roped a two-out double to plate our first run of the game.  Her hit sparked a four-run rally to eventually win the game 4-3.

Girls Varsity Lacrosse: Sophia Knoblock ’22
The GVLax Player of the week is Sophia Knoblock.  Sophia has been a staple of our offensive unit for several years, and her crease attack, in particular, shines as a key element of her success on the field.  Sophia scored 5 of Deerfield’s 8 goals in Saturday’s win over Westminster, and she proved to be a critical contributor in the LBC bowl  victory.

Boys Varsity Track & Field: Wedner Cadet ‘22
Wedner Cadet deserves credit this week for the work that went into his 3 inch PB and school record in the High Jump. Coach Belcher credits the work Cadet put in throughout the week for his significant improvement in an improvement he was already winning with ease on a weekly basis, and foresees even stronger jumps in the weeks ahead. Great work Wedner!

Boys JV Lacrosse: Walter Burkley ‘24
Walter is this weeks DOTW for the JV boys lacrosse team.  Walter has demonstrated his amazing versatility and athletic prowess both on and off of the lacrosse field this week.  On the field he has been a defensive impact player at the LSM position while also picking up a short stick when needed.  His effort in practice carries over to his performance on gameday.  Off of the field he also was a star in the Spring Dance Concert.  Walter continues to impress with each new challenge and we are fortunate to have such a talented individual in our community.

Boys Varsity Baseball: Stephen Souder ‘23
Varsity baseball is excited to select Stephen Souder as our DOTW. Stephen played solid defensive games in Wednesday’s win over Choate and Saturday’s doubleheader sweep at Exeter. On Saturday, against Exeter, Stephen was robbed of extra bases on a great defensive play by the Exeter centerfielder. Stephen has been a reliable outfielder defensively, is our team’s best bunter, and continues to have productive at bats. We are expecting big things from Stephen down the stretch this spring and next year. Keep up the great work!

Boys Varsity Tennis: Jimmy Ueland ’22
Last week proved to be a pivotal shift for senior, team captain Jimmy Ueland.  After struggling through the early part of the season with injury and illness, Jimmy found his form this week notching impressive victories in doubles and singles against NMH and Hoosac respectively.  At practice, Jimmy has led by example and increased his own level of intensity and preparation.  Resulting in higher energy for the entire team, as Jimmy has led from the front. The team will continue to need strong leadership and preparation as the toughest part of the season approaches.

Ultimate: Miu Yatsuka ‘24
Miu Yatsuka ’24 is the Ultimate Door of the Week.  Miu has been a good contributor to the program all season, but this week she really turned it on to match a strong focus on skill development with her natural athleticism and her excellent sense of the field.  The timing and precision of Miu’s cuts earned her a shoutout in our last game, but they also make a positive difference in team growth at every practice.  It is wonderful to see Miu work hard and grow tremendously as an Ultimate player, all while maintaining a sense of fun and putting positive energy back onto the field.  What a bonus for the team!​

Girls JV Tennis: Juliet Amadeo ’24
The Door of the Week for JV Tennis goes to Juliet Amadeo! Juliet is the roster’s most flexible player; she excels in both singles and doubles, and she is always willing to help the team by trying out a new position or partnership. On Saturday, a last-minute change meant that Juliet stepped into the #1 doubles spot, where she demonstrated her characteristic blend of poise and competitive grit. She and Giorgia Santore pulled out an excellent 8-4 win against a formidable Hotchkiss opponent. The team is grateful for both her outstanding tennis and her powerful leadership!

Girls Varsity Tennis: Natalia Sanders ’24
Natalia has played an incredible week of tennis. She battled hard versus one of Andover’s best players, overcoming a 1-4 deficit to force a tie break last week. On Saturday, Natalia put together a methodical and dominant win over her Hotchkiss opponent. It is impressive to see Natalia use what she learns each match to become better the next time she’s on the court.

Theatre: Cam Howe ’22
Cam Howe always finds the joy in the work and is a joy to work with as a result. She is even keeled, positive, thoughtful, communicative, technically masterful, and supportive of others. As one of our dance captains, she has easily commanded the room and provided empathic and helpful feedback to our ensemble. She is doing incredible work on this show and as a member of our theater community. 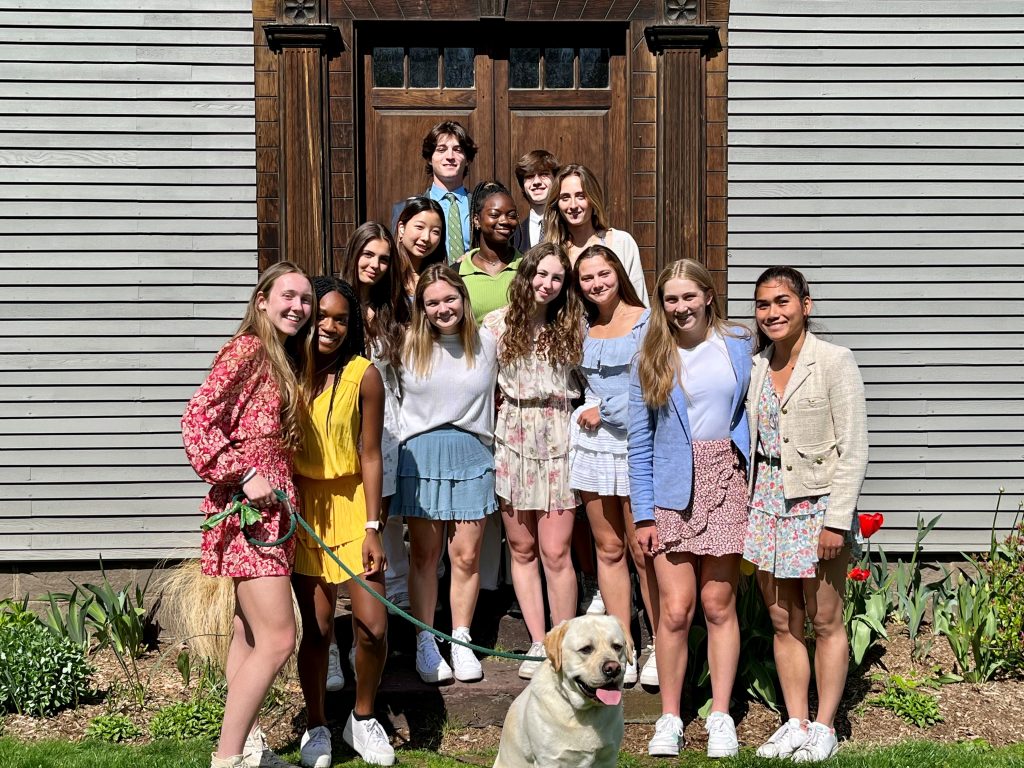