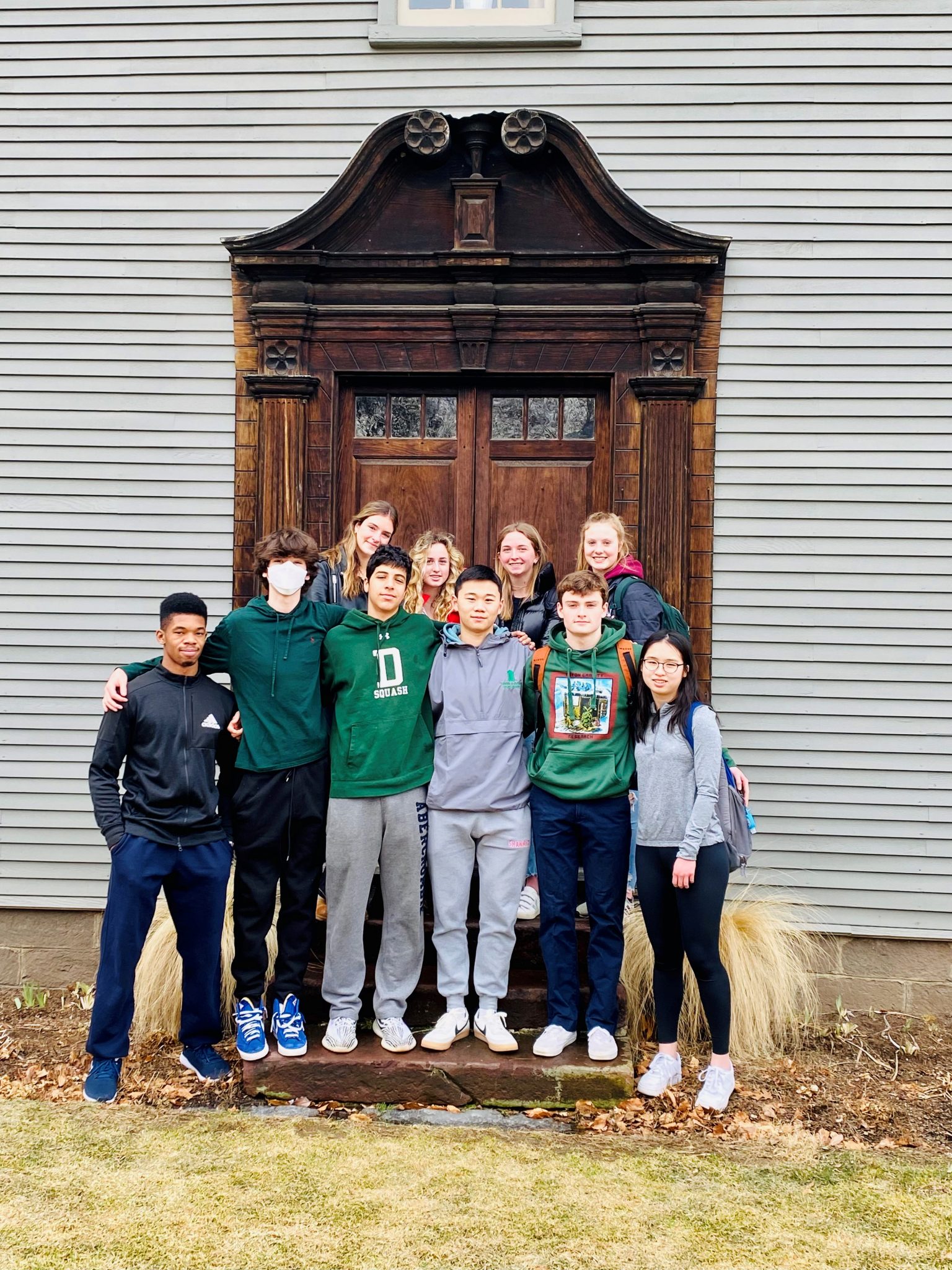 Girls JV Hockey: Annabelle Brennan ’23 & Lila Church ’25
Annabelle is new to hockey this year, and has been working hard on her skating, passing, stickhandling, and shooting the last few months.  In the Wednesday game vs. Williston, Annabelle put her skills to work, got in excellent position in front of the net, and was able to fire home two goals.  She also assisted on another goal scored by one of her line mates.  The entire team loved seeing Annabelle enjoy this hard-earned success.  Well done, Annabelle.

Lila has been working hard in practice on her shot, as well as on releasing her shot quickly.  The strategy of simply putting the puck on net was rewarded Saturday with two goals vs. Choate in a 9-3 win.  Whether against the shooter tutor or against teammate Greta, Lila has been exploring ways to make the puck find the back of the net.   Well done, Lila!

Girls Varsity Swimming & Diving: Hasini Pundla ’24
Lauren Smith choose Hasini Pundla to be our door of the week this week and shared the following comments, “This week the Orange Award goes to someone who is always positive, always smiling, and always hyping up others. She’s been working really hard in practice, especially today when we had a really hard set and our intervals were really challenging.  This week the award goes to Hasini!”

Boys Varsity Swimming & Diving: Mark Cai ’22 and Robert Amundson ’22
As the Captains of the swim team this year, Mark Cai and Robert Amundson have created a culture of hard work, dedication, care, and fun.  As the only members of the program who were on the team pre-covid, how they acted each day in practice, and the many traditions they carried forward, were critical to the success of the program this year.  They have helped create a positive culture and strong team chemistry this year – a legacy that will endure for sure.  Their role as leaders has been remarkable.  This past weekend, the Deerfield squad took on Hotchkiss and ended up with a convincing 106-77 win.  Both Robert and Mark swam seasonal best times in their events – both winning their critical races by just a couple of seconds.  With the New England Championship meet just over two weeks away, we know their leadership of this young squad into our biggest event of the year will no doubt continue to motivate and encourage excellence with all our swimmers.  We are proud and honored to name Mark Cai and Robert Amundson as our Doors of the Week.

Boys JV Squash: Brick Johnson ’24
Since returning from illness after Winter Break, Brick has quickly ascended the JV ladder from #6 to #2. He has also led the sprints and brought intensity to practice drills. I applaud his effort and am hopeful that he will continue to develop as a player and leader of the team.

Girls Varsity Squash: Willow Woodward ’22
Throughout the season Willow has been a positive leader and role model for the entire squash program.  She competes intensely on match day, trains diligently every practice and her dedication to the sport brought her to the finals of the #4 flight at New England’s this weekend!  Willow is more than an excellent player, she is also a trusted teammate and patient player/coach during matches and she brings a great deal of positive energy and love of the game to the courts every day.  It has been an extraordinary senior season for Willow and her positive impact on the program will last beyond this season as the younger players carry on her example.

Rec Hockey: Paul de Bruyn Kops ’24
The rec hockey Door of the Week is Paul de Bruyn Kops. Paul has improved so much since the start of hockey season. He is a more confident skater and passer and is a competitor on the ice! We love having him on the rec team and look forward to his contributions in our upcoming games!

Girls JV Squash: Marnie Todd ’23
Marnie comes to practice and plays in her games with a positive attitude that makes her a valuable member of the team.  She gets along well with her team-mates, and she works hard to contribute to the team.  Thanks for the hard work, Marnie!

JV Swimming: Jazmine Wilson Bigornia ’25 and Ellie Nam ’25
JV Swim has so many fantastic athletes that we couldn’t pick just one Door of The Week this week. Instead, we’d like to recognize two fantastic swimmers: Jazmine Wilson Bigornia and Ellie Nam. Despite being new to the team–and to Deerfield, both Jazmine and Ellie have demonstrated a great deal of maturity this season through their humility, reliability, and quiet determination. Both swimmers have seen substantial improvements this season, most notably in their 50 and 100 free times. In our meet last weekend, Jazmine and Ellie’s hard work paid off. Ellie scored points for Deerfield in the 50 breast and 50 free and Jazmine scored in both the 50 breast and 100 IM. We’re thrilled by the strides Ellie and Jazmine have made this season and expect to see more powerful swims from them in our meet against Bement and MacDuffie next Wednesday.

Girls Varsity Hockey: Lauren Sobczak ’24
Lauren Sobczak ’24 is the GV Hockey Door of the Week for her excellent performance in the Westminster and NMH games. After having a long break from hockey with some unfortunate covid game cancellations, Lauren came back into the net steady and ready to go. She was rock solid in both games, and made some key saves for the team, finishing the week with her first Deerfield shutout against NMH! Lauren is a strong goalie, but more importantly, a great teammate. She always brings positive energy and good worth ethic, coupled with a genuine desire to develop as a player.

Girls Varsity Basketball: Aoife Bruce ‘22
This week’s athlete is Aoife Bruce ‘22. When Aoife steps onto the court, the pace of the game shifts. She is a smart, quick, and powerful defender who is able to effectively limit the scoring opportunities of those she defends against as seen in our last game against Loomis when she matched up with one of Loomis’ toughest players. Offensively, Aoife is not afraid to drive to the basket and consistently works to open up opportunities for her teammates. It’s been fantastic to see her tenacious style of play develop over these last few months.

Girls Thirds Squash: Abigail Ng ’25
The DOTW for Girls Thirds Squash is Abigail Ng. Abigail’s tough matchplay against Bement sealed the team’s overall win. After losing her first set 6-11, Abigail reentered the court with a new approach: she matched her opponent’s pace while also increasing the depth of her shots and the speed of her footwork. As the home crowd behind her grew in intensity and enthusiasm, Abigail hit her stride and won the next three sets 11-6, 11-8, and 13-11​. It was a hard physical fight throughout the entire match, but her focus, sportsmanship, determination, and athleticism never wavered. 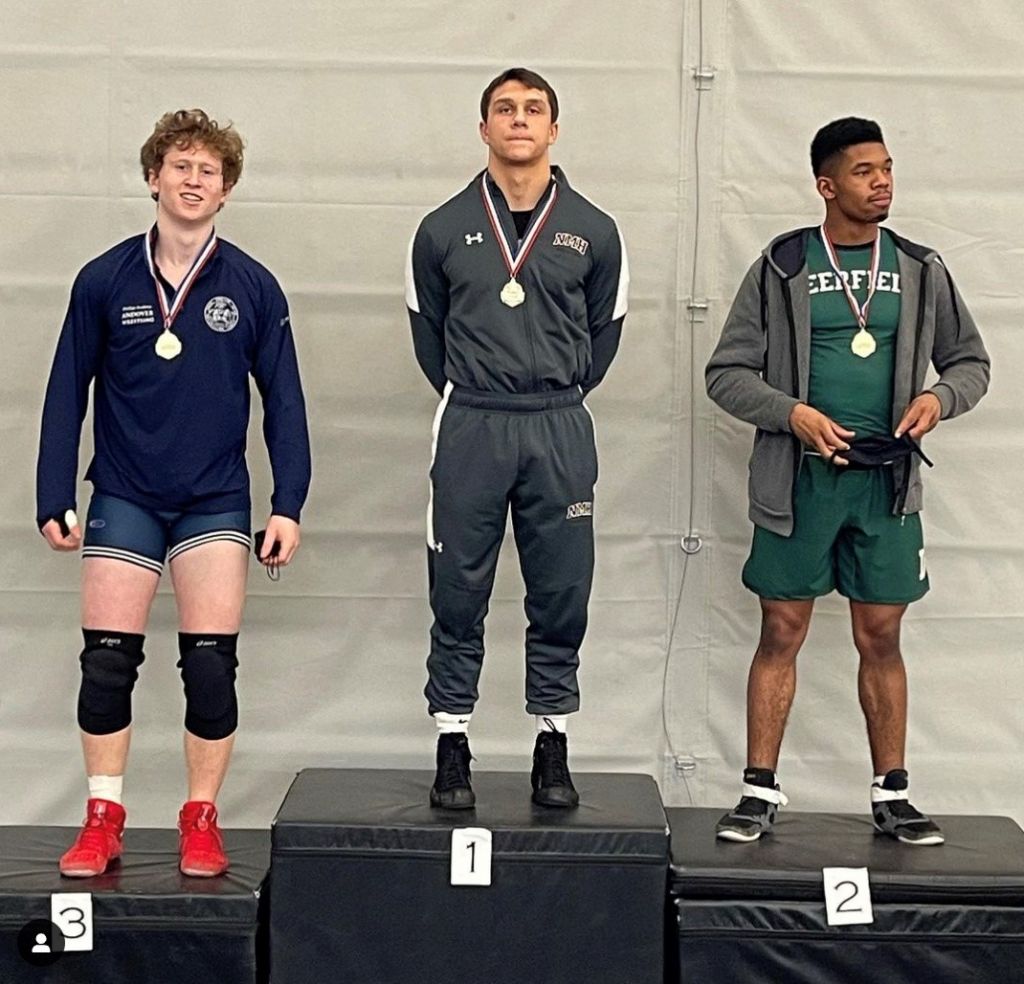 Wrestling: Donovan Woods ‘23
Tenacity, perseverance, determination—all these and more describe Varsity Wrestling’s Door of the Week, Donovan Woods ’23. Donovan walked into the Kravis three years ago, a total novice with a tough exterior and a big heart. He won some, he lost some. He sometimes struggled. But he never gave up. Last weekend at the Class A championship, Donovan proved his mettle. And he proved what we so often repeat: that hard work and grit will get you there. In a tough bracket (170lbs), Donovan—who was unseeded ahead of the tournament—won a 12-11 decision over the #2 seed from St. Paul’s after a hard-fought three periods in the quarter-finals. Advancing to the semi-finals, he PINNED the #3 seed from Andover in five minutes. Donovan lost his 1st-place match to the #1 seed and Army-commit from NMH, but he faced his opponent with confidence and modesty. Donovan epitomizes our bywords of Love, Humility, and Purpose. Congrats, Donovan!

Boys Thirds Basketball: MacGregor Hynds ’25
Our DOTW this week is MacGregor Hynds. As our primary big man this season, Mac has made great strides learning to play the post position and brings a great attitude and passion to each practice. 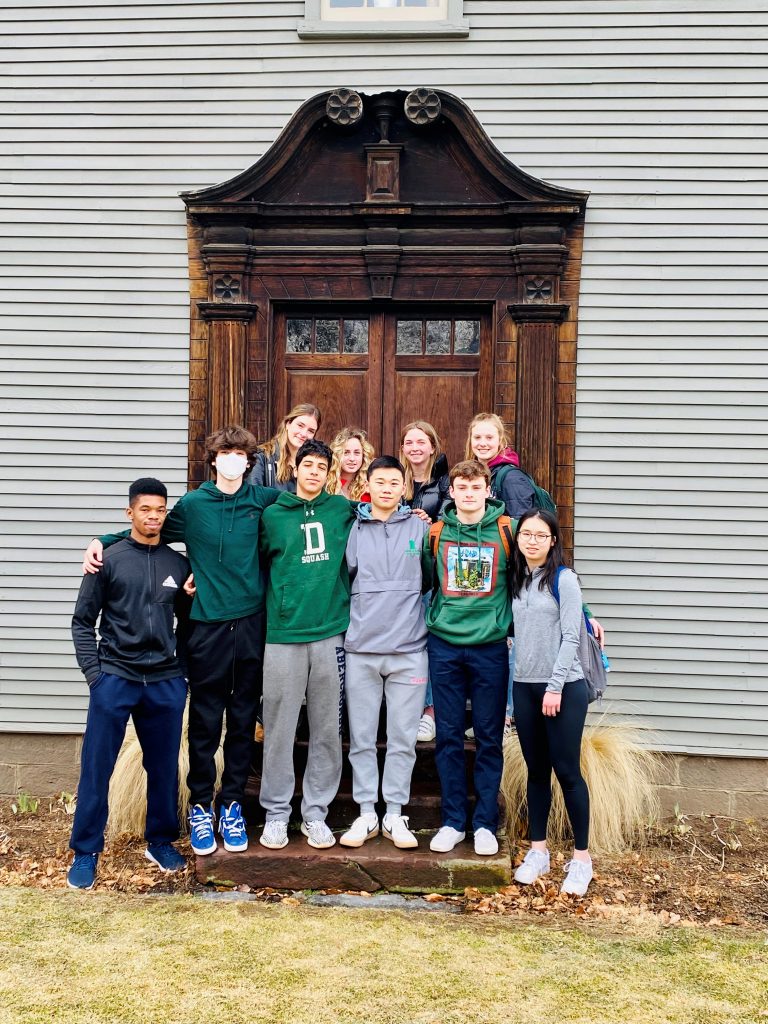