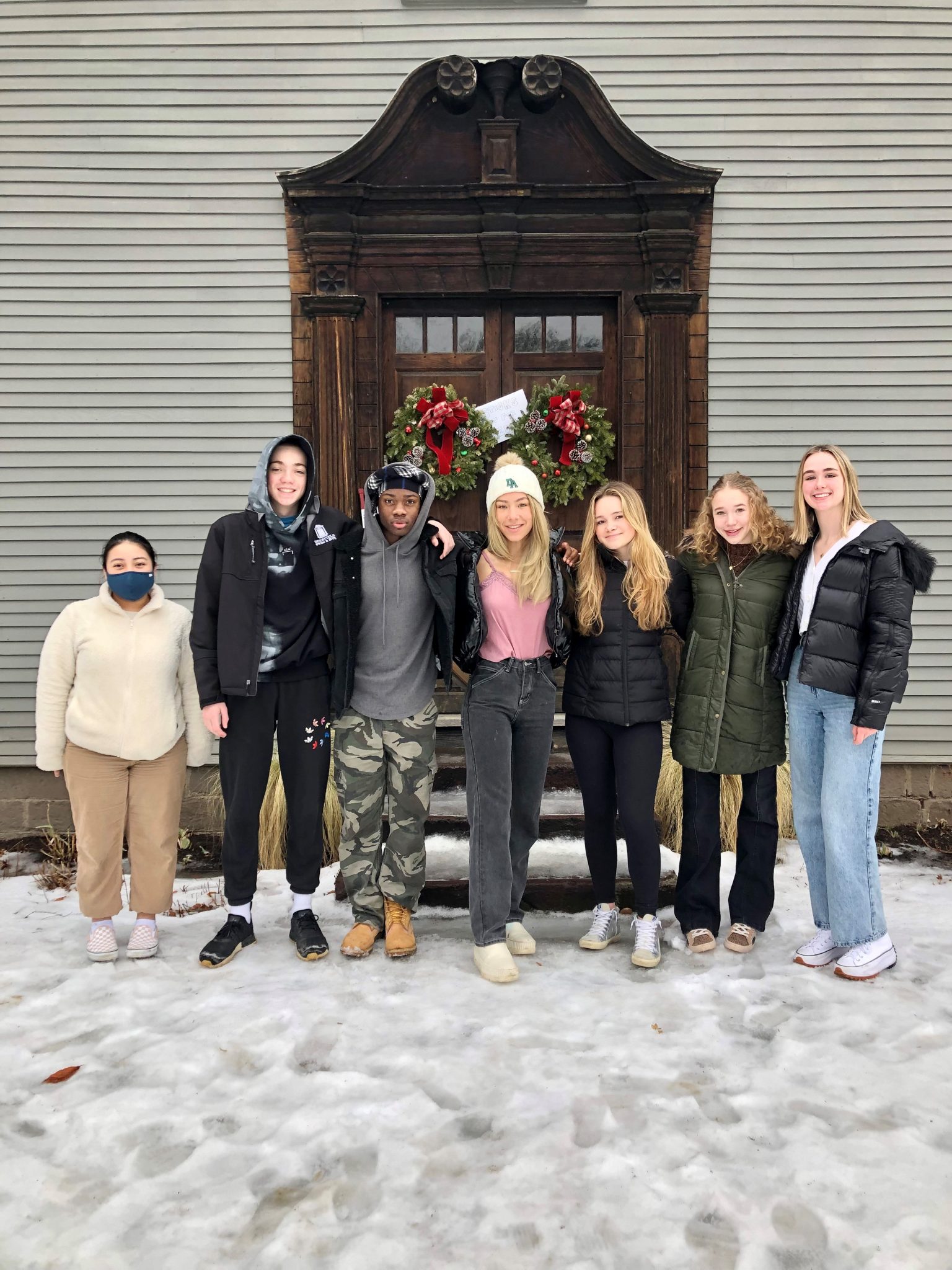 Boys Varsity Swimming & Diving: Levi Tipton ’24
Levi definitely has one of the highest swim IQ’s in the league.  It is a sport he loves and dedicates himself to and it shows.  On Saturday, January 22nd in a meet against out bitter rivals, Choate, Levi’s competitive expertise and team-first attitude were nowhere better on display than in the 100 backstroke event.  At that juncture, our lead over Choate was only 1 point.  Levi’s race – staying neck and neck with his opponent for 75 yards and gradually pulling away for the win in the final 10 yards – was one of the best races we have witnessed in some time. He swam a season best time of 55.77 seconds. That race maintained our lead and helped us defeat Choate 99-86.   It’s exciting to be a part of Levi’s swim career and to know that he still has just over two years left in the program!  Levi is well deserving of this Door of The Week honor and we send him our most sincere congratulations.

Girls Varsity Hockey: Bliss Vernon ‘22
Bliss “The Menace” Vernon ’22 earned the Door of the Week for GVH for her positivity, relentless energy, and team-first attitude. Bliss managed to juggle dance rehearsals with practices and games this week, and was willing to step up and play defense when the team was down several players. When we’re up or down in games, we can always count on Bliss to be giving it 100% on the ice, and to be an endless source of vocal support for teammates. She’s a great teammate and competitor, and we’re grateful for all she does for the team!

Boys JV Hockey: Will Scharfenberger ’23
Will has been the only goalie with the team all season long. This means he gets all the shots at every practice and can’t ever miss a beat both at practice and on game days. He does this with a smile and has performed better than we could ever have expected. He is a great teammate and someone we’ve all gained a huge amount of respect for. His goals against average remains low and he make us all play better with his effort and attitude. Keep it going Will!

Girls Varsity Swimming & Diving: Lauren Smith ’24
Teammate, Katie Lawrence, presented this week’s award with the following words about Lauren: “The Orange Award is going to someone who has been extremely positive during really hard sets. When practice gets tough she keeps going and never complains. Also, she is a really great role model.  Her work ethic is awesome and she inspires all of us by swimming hard every day.  This week the Orange Award goes to Lauren Smith!” –Katie Lawrence

JV Swimming: Melissa Chun ’24
This week’s door of the week for JV swimming is Melissa Chun. Melissa is exactly the kind of athlete every team is lucky to have! Often one of the first swimmers at team meeting and always working hard to finish practice, she’s quiet but mighty. At a recent practice, many of the newest members of the team were lucky enough to learn from–and celebrate–her model butterfly technique. At our first meet, Melissa gave solid performances in the 50 free and 100 back, and is showing improvement every day. We’re thrilled to have her on the team and can’t wait to see how she swims in our upcoming meet against Suffield.

Girls JV Basketball: Mary O’Shea ‘25
Mary stands out because she continuously pushes herself to improve on both ends of the court. She rebounds like a boss and makes plays happen because she looks up at the full court and moves the ball where it needs to go. Mary is always positive, always supportive, always pushing herself to get better, and she is a first-rate teammate. She gives a hundred percent to every drill, every competition, and every discussion. A quiet force, she leads by excellent example.

Girls Varsity Basketball: Georgia Sackrey ‘23
This week’s athlete is Georgia Sackrey’ 23. Georgia’s tenacious play, consistent hard work, and team-centered attitude has brought our team to new heights. Offensively, her post moves allow her to skillfully bypass her opponents and be a dynamic force in our plays. Defensively, she is a great rebounder and her basketball IQ shines through as she stops the other team’s offenses in their tracks. It has been remarkable to watch her play this winter, and the coaches have all seen and respected her commitment to the team and her individual development as a player.

Varsity Wrestling: Sophia Burke ’23 and Josephine Louis ’23
Varsity Wrestling’s Doors of the Week are two female wrestlers who’ve gone above and beyond in pursuit of the pin: Sophia Burke ’23 and Josephine Louis ’23. In a season plagued by cancelations, Sophia and Josephine have repeatedly hit the road for matches, wrestling two tournaments at Andover and one at Middlesex. Sophia has soaked up knowledge in the Kravis and gone after it on the mats. She tries something new every match, and she squares off against anyone and everyone. No hesitation. Complete focus. Josephine has shown remarkable growth in two seasons. Her skill development from her first match this season to her second was so pronounced that coaches from rival schools remarked on how fluid and precise her technique has become. Why two Doors this week? Sophia and Josephine both wrestled through the most competitive brackets at the annual Andover Female Wrestling Tournament to place 3rd in their respective weight classes. They’re doing great things for DA Wrestling!

Boys Thirds Basketball: Ephraim Tutu ’24
Our DOTW is Ephraim Tutu. He scored 12 points today in the loss, one of the highest scoring games for a thirds player this season, and has been one of our leading scorers all season.

Girls JV Squash: Abby Morsman ’25 and Caroline Hoff ’22
As a ninth grader, Abby has recently played in important games for us, most recently in the #7 spot against Williston.  She comes to practice on time and dives into the drill or game at hand; she has also stayed after practice to hit around with a team-mate, showing her dedication to improving.
A veteran on the JV squash team, Caroline played in the Varsity game against St. Paul’s on February 2nd, and, along with Zeyna Ilahi, she represented the Girls JV Squash team well.  She hustled for the ball and did not give up when her opponent consistently hit drop shots.  While she dropped her match, she had a strong showing in her final game!

Boys Varsity Squash: Beck Ayres ’22
Against St. Paul’s, Beck earned an impressive 3-2 win over his opponent by wining the fifth 12-10, helping the Big Green to a great team 6-1 victory! 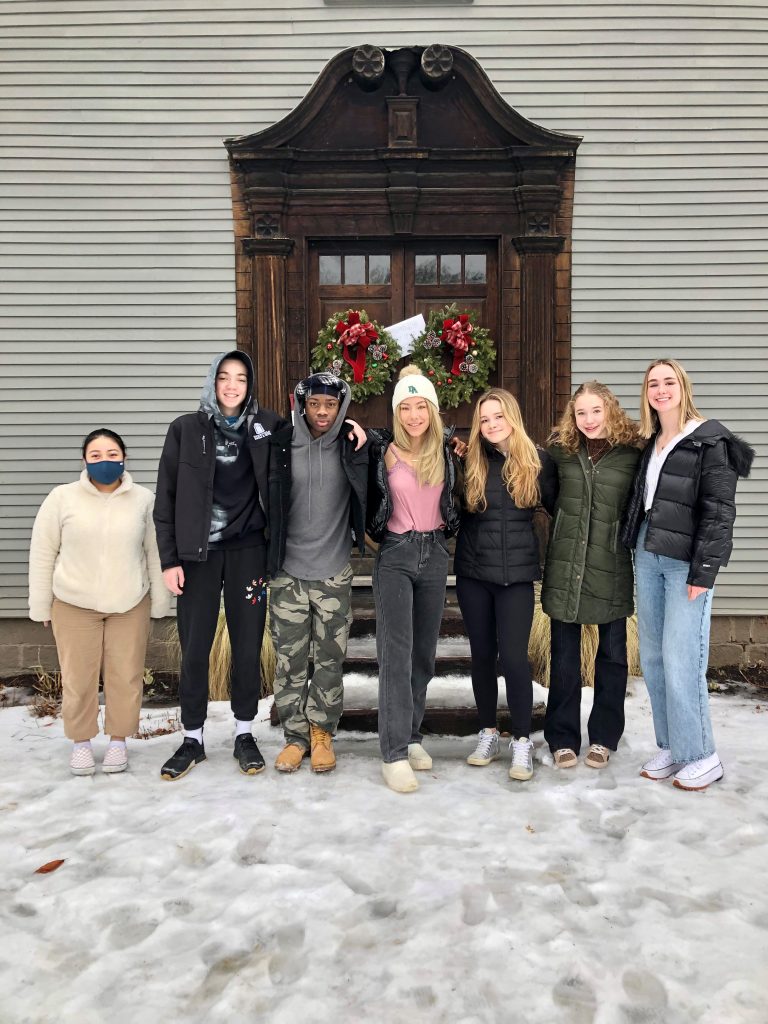