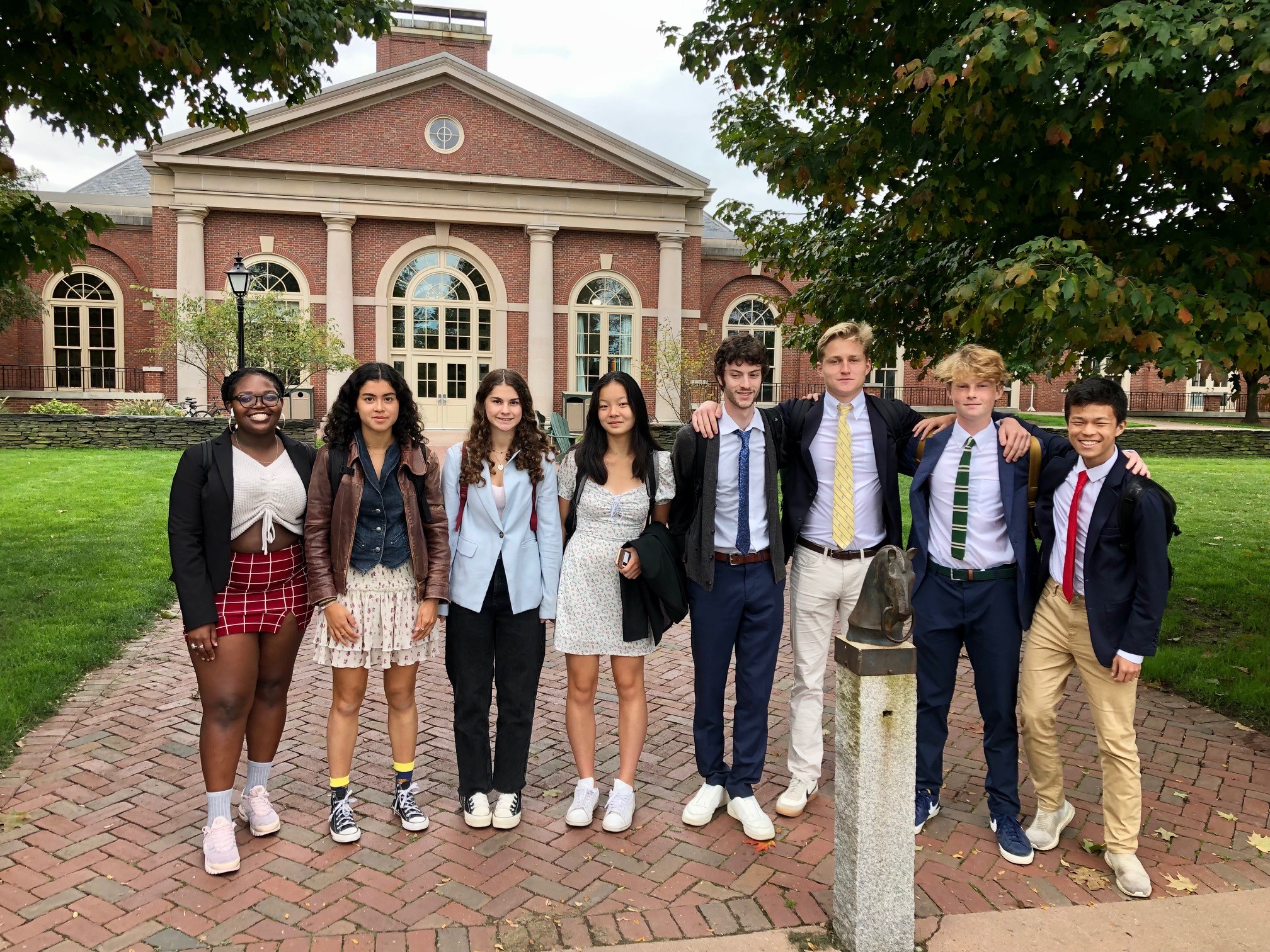 Girls Cross-Country: Alice Zhang ’24
Alice Zhang ’24 is the Door of the Week for the girls cross country team this week, for her almost unbelievable performance at the Westminster Invitational race this weekend. Alice came second in the JV race, which is an incredibly impressive achievement considering that not only is Westminster a famously tough course, but this was also Alice’s first ever 5k. She really made a striking 5k debut! Alice joined the cross country team this year, and has been a consistently dedicated, positive, and hard-working member of the team. Her hard work in each long run and workout paid off as she overtook runner after runner, pushing through the final stretch to take second place as she was cheered on by her teammates from both the boys and girls xc programs. Congrats, Alice!

Boys Cross-Country: Billy Tang ‘25
Door of the week goes to Billy Tang ‘25 for expending every ounce of energy in a  gutsy attempt to take the lead in the late stages of the race. As a self-proclaimed short distance guy, Billy has resoundingly proven his mettle at the five kilometer event. His efforts this weekend serve as an example for the team.

Varsity Field Hockey: Charlotte Iler ’23
Charlotte Iler ’23 helped solidify the win for Deerfield on Saturday in our match-up with Exeter.  Her relentless effort and skill in the midfield supported the attacking forwards.  Then, at her wing position, she executed several give-and-go plays creating offensive corners, and shots on the goal.  Charlotte’s break-away goal in the second quarter showcased her poise and stick work.  She has added significantly to this team this year, and we have enjoyed her effort and skill alongside her good humor and positive spirit.

Varsity Volleyball: Elle Stearns ’23
Elle Stearns is the Varsity Volleyball DOTW. Elle is impressive during our matches stepping in as a defensive specialist with top notch serving and passing. Yet, it’s her attitude at practice that stands out as above and beyond. She consistently leads by example bringing her best for every drill and immediately helping to gather volleyballs and wrap things up after drills or practice. Thanks Elle for all you bring to our team!

Theatre: Dominic Sessa ’22
Bold, wildly imaginative, and utterly fearless, Dominic is lighting up the rehearsal room everyday with his superb comedic skills! Unafraid to be unreservedly outrageous, Dominic sets the bar high for his fellow ensemble members, and they are rising to his challenge. He demonstrates dedication and the utmost professionalism from himself and from those who share the stage with him. We remember Dom’s tyrannical Creon in Antigone, but few have been lucky enough to witness him in a role that calls for absolute, uninhibited lunacy! Now you have the opportunity to see his comic brilliance in the Fall play Rumors, and we think audiences will want to return again and again, in part to see Dom’s magnificent, and literally breath taking performance.

Boys JV Soccer: Tommy Augustine ’24
My proudest moments are when an opposing coach singles out a player for his class and sportsmanship. Tommy earned that during last week’s emotional win vs. Taft when he kept his teammates in line after a heated exchange on the field. He has also made a leap as a player in the last two weeks. As center forward, he is working hard to present himself to the midfield, feed the wingers, take corner runs, and to bring the ball to goal. His play at Kent on Saturday was ascendant. With two goals and a creative heel-pass assist, he was instrumental in putting the game out of reach in the second half. Now that he knows how to play his position better, his work rate and aggressiveness have increased. His speed, quick decision-making, and emerging leadership are huge assets for our team right now.

Boys Jr. B Soccer: Finn Knight ’25
Our Door of the Week is Finn Knight ’25. As one of our captains, Finn is a leader on the team, from directing pre-game stretches to leading the team through drills. He always comes to practice with a smile and great attitude and is willing to play whatever position on the field that we need him to.

Boys Water Polo: Levi Tipton ’24
Bouncing back from a lopsided loss at home against a talented Suffield squad, the polo team played well against St. John’s in a road game on Saturday. With a full commitment to active defense and intentional offense, the team controlled play at both ends of the pool. Levi Tipton ’24, a player new to the game, combined his speed and his developing savvy to help his teammates secure the 9-2 victory. 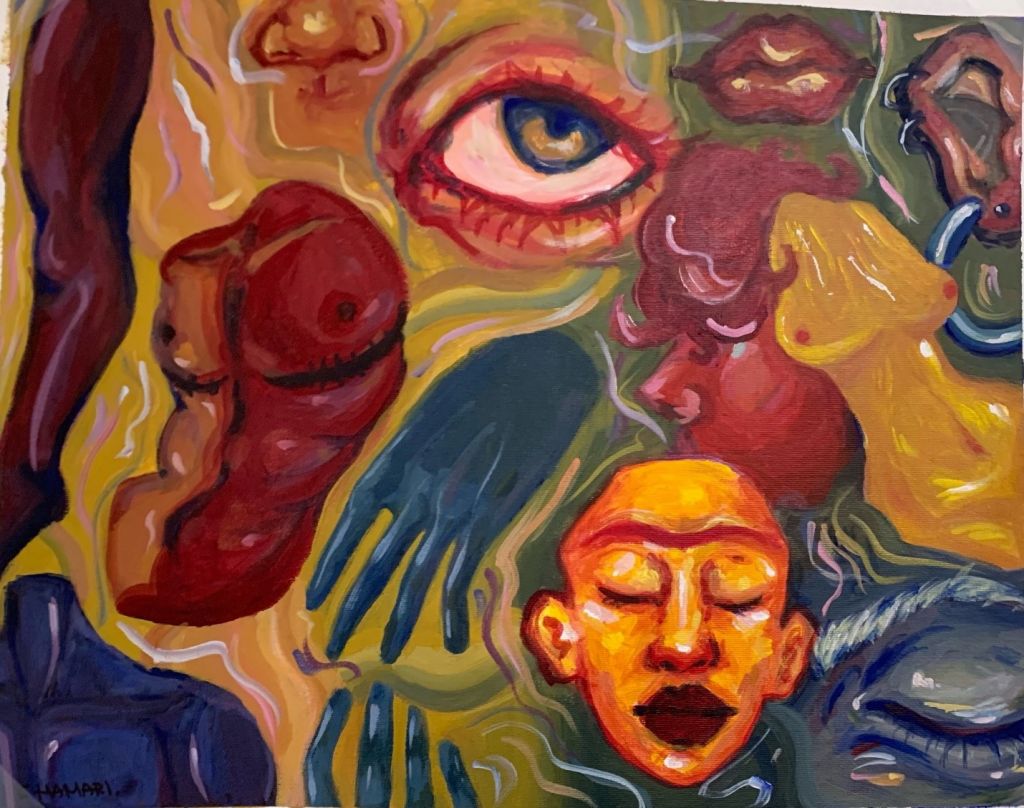 Boys Junior A Soccer: Jack Chorske ’22
We are so fortunate to have Jack on the team this season. At keeper, he has the talent and work ethic to play at a higher level, but with eight keepers in the Deerfield soccer system he selfless stepped up to step in goal for the Boys Thirds squad. He is a big reason we’ve remained undefeated, especially after last Saturday’s contest when he made save after save after save against a relentless and talented Cardigan offense. But even more a standout goalie, he’s our clubhouse leader. As captain on a young team still finding its way, he strategically directs traffic on the field and challenges his teammates to commit to the team and to themselves off of it. We’re fortunate to push on into this season with Jack at the helm.

Girls Varsity Soccer: Elsa Schuberth ’22
Elsa has been an incredible addition to the girls varsity soccer team this fall. She has been willing all season to step into different positions, where ever the team has needed her and she has moved between these different positions with ease. On the field, Elsa reads the game and her teammates very well consequently, she is always able to challenge our opponents defense. She is always seeking feedback from coaches to add new layers to her game. For her tireless effort and her versatility on the field, for her team first attitude and overall joy of the game, Elsa is this week’s Door of the Week.

Thirds Volleyball: Zoe Mattias ’23
Our Doors of the Week are our captains, junior Zoe Mattias and senior Hannah McKie.  They have been enthusiastic, focused and excellent at both caring for their teammates and setting expectations for full engagement in daily practice.  Even in a week no games, they brought the energy and desire to improve as a team.  We’re lucky to have them leading our team this year!

JV field hockey: Josephine Louis ‘24
We nominate Josephine Louis ‘24 — for her extraordinary speed and skill in moving the ball down the field, and for the two goals she scored in our decisive 4-0 win against NMH. These two goals, scored back-to-back, set the pace for this energetic win. Congratulations, Jo! 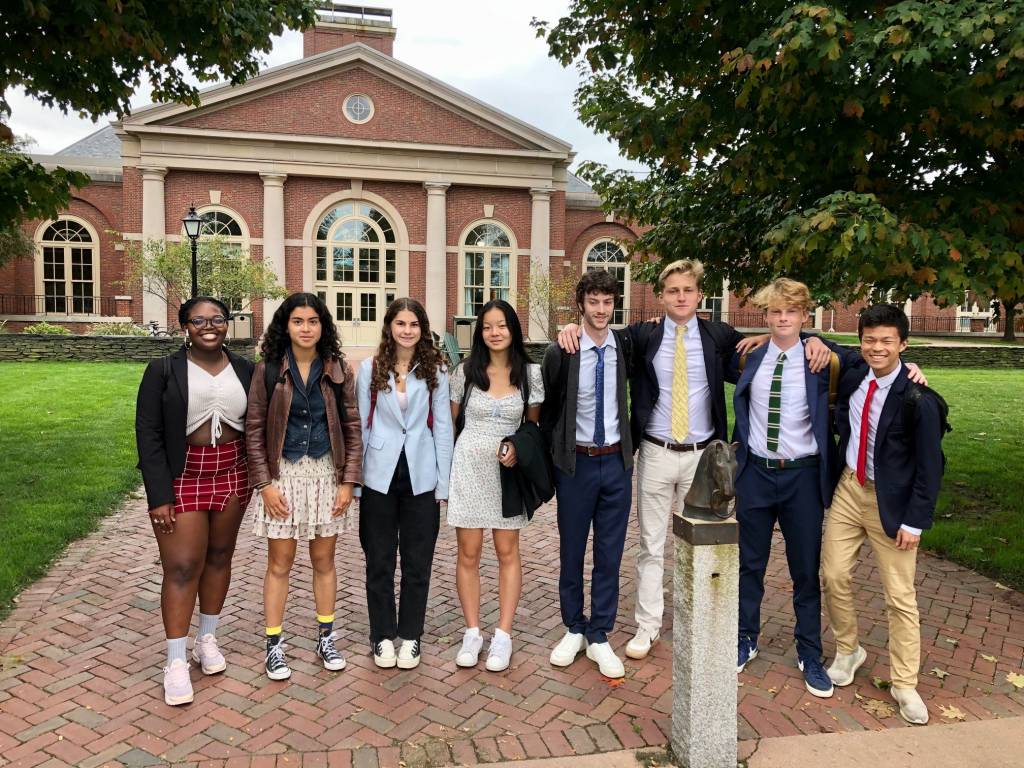