Boys Varsity Swimming:  Totton Heffelfinger ’23
Totton is a new sophomore at Deerfield and when asked about his swim times often replies, “I have no idea!”  As someone fairly new to the sport and training at this level, that answer is not all that surprising.  Unfortunately, Totton was not able to swim in our first virtual meet on February 3, so as coaches we also did not truly know what times he could swim.  However, we did know that Totton – even in his short time at Deerfield – was making a positive impact on the team.  On Wednesday, February 17th we swam against Hotchkiss ’17 and finally got answers to our question, “What times do you swim?”  To put it candidly, Totton was simply mind-blowing in that meet.  He led the charge to our comeback win over the final three events with his first-place finish in the 100-yard Backstroke and as a part of the winning 400 Free Relay, swimming a superb 51.0 seconds in his leg of the 100 free in that event.  Totton has been extremely diligent and inquisitive during practices, demonstrating his desire to work hard and improve and we saw all that effort come to fruition in our Hotchkiss meet.   Totton should be very proud of his season to date and excited for what is to come in his swim career at Deerfield, the coaches sure are! 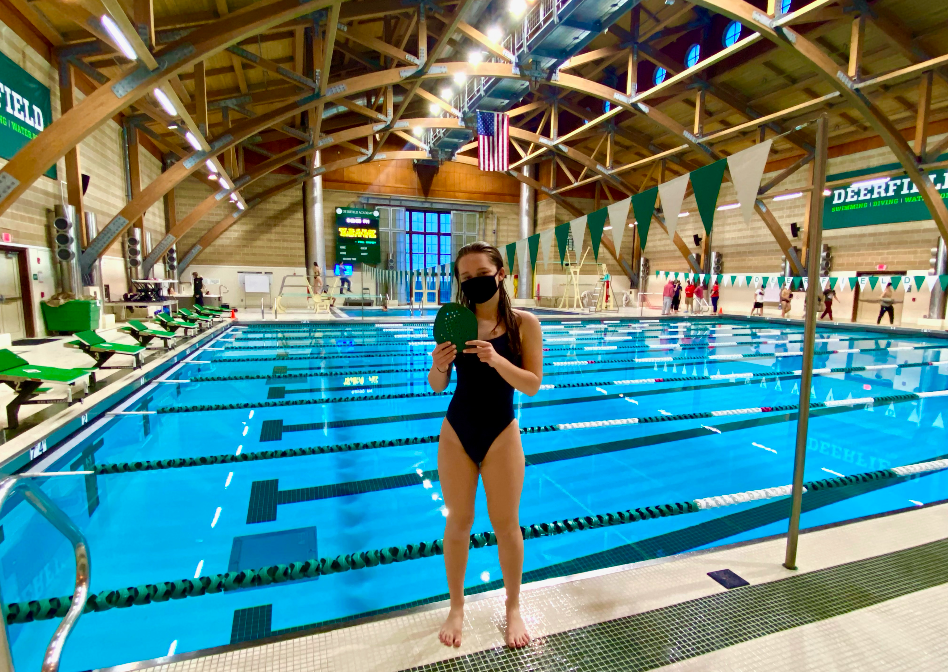 Alpine Skiing: Claire Patton ’22 & Chip Coffin ’21
Both Claire Patton and newcomer Chip Coffin have helped the Alpine Ski team to early success on the slopes.  Claire and Chip were each 2nd in the opening giant slalom of the season and captured first place in week #2’s slalom event.  They lead by example as they come to practice with a desire to improve with every training run.  With two races remaining in the Mt. Institute Ski League, Claire and Chip are eager to pilot the boys and girls ski team to victory.

Girls Thirds Squash: Stella Fierro ’23
While new to the team this year, Stella has brought a veteran presence since the start. Part of that owes to her talent, as she’s held on to the top spot on our ladder all season and never lost more than a single game in a challenge match. She’s offered tips and guidance to the many beginners on our team, always with her signature upbeat enthusiasm. Being the top seed means she has half as many challenge matches as her teammates, but she happily shows up every night without complaint ready to score and offer encouragement, making her the last one to leave. We’re lucky to have her on the team!

JV Boys Squash: Will Newton ’22
The JV squash program continues to have a great deal of fun out on the courts and Will Newton is a big part of the team’s energy and positive dynamic.  Will is out on the courts early and always stays late, he plays for the love of the game.  He always carries a big smile out on the courts and his teammates all appreciate his enthusiasm and welcoming spirit.  It has been a pleasure coaching Will out on the squash courts, he’s been invaluable to the squad’s success.

Boys Varsity Hockey: Thomas Moreau ’23
Our Door of the Week is Thomas Moreau. Thomas has improved tremendously this winter and has been lighting the lamp consistently in practice. He works hard every day, has zero ego, and has done whatever we have asked of him.

Girls Varsity Basketball: Evan Burkert ’21
This week’s athlete to highlight is Evan Burkert.  She has had a tough year with lots of time spent in quarantine and a recent injury.  Through it all, Evan has kept a positive attitude and has focused on team unity.  Evan is a senior leader on the team, and her generosity in teaching the newer players our offenses and drills has been invaluable.  Evan can play both forward and guard, and we rely on her to be a swing player, ready to help out wherever she is needed!  Evan has a great elbow jump shot and a quick drive to the basket; we look forward to having her play a few games in her senior season!

Boys JV Hockey: Darien Chiang ’23
Darien comes to the rink every day ready to play and play hard. First on the ice and one of the last to leave the ice. His smile is ever-present as his the effort he gives. He is consistent in all the good habits he brings to the team. And he’s a pretty good player too!

Theater: William Grosse ’22
Always quietly working away, William’s calm and consistent presence is much respected. Never showy or brash, William is ever watchful, as he continually polishes his performance. Patiently waiting for larger roles to come his way, William shows what true professionalism looks like in the theater world. He is always on time, always focused, and unrelentingly respectful. This term we see him perform in “The Tarantino Variation” and “The Crucible”, but look out for future projects directed by him. William has already demonstrated that he is a force to be reckoned with as a director of both film and theater.

JV Swimming: Lila King ’24 and Daisy Fitchthorn ’23
JV swimming is pleased to nominate Lila King for Door of the week.  Her steadfast effort and strong leadership made her a standout this week as she sparked her lane to complete practices with effort, thought, enthusiasm, and determination.  Her can-do work ethic makes her an important member of the team.
Daisy Fichthorn earns Door of the Week honors for her efforts in JV swimming.  An enthusiastic and determined swimmer from day one, she is focused and loves the challenge of swimming hard sets on short intervals.  Never one to shy away from a great workout, her attitude makes her a welcome newcomer on the team.

Wrestling: Kathrine Margulis ’24 and Josephine Louis ’23
Varsity wrestling’s double door this week is the training partnership of Kathrine Margulis ’24 and Josephine Louis ’23. Of all the partners in the room, Kat and Jo are among the hardest working, most focused, and most intense duos. They listen with focus, apply new skills with determination, and wrestle with passion. At our intramural meet last Friday, Kat and Jo both had their first matches—both facing reigning New England champ Angela Osei-Ampadu ’21. They ran to the mat, smiles on their faces, and bravely faced a much more experienced wrestler. They wrestled with purpose and grit, never making anything easy for Angie. It was a thrill to see them in action. Kat and Jo both have a bright future in DA Wrestling!