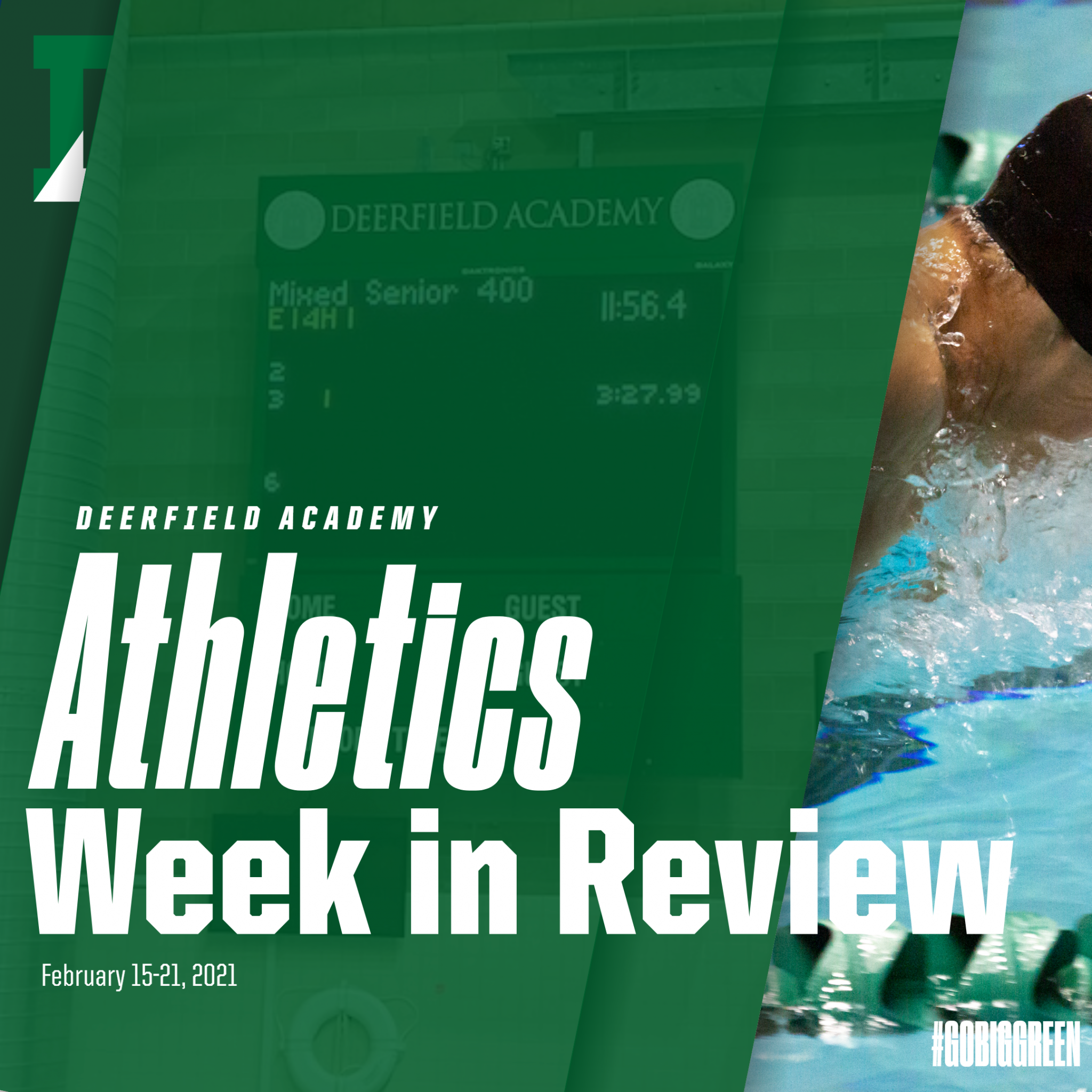 It was a great week for Deerfield teams as they continued to work hard, challenging themselves and one another on the courts, in the pool and on the ice. The week ahead will bring more “Green & White” scrimmages and games against outside competition!

JV Swimming:
This week JV Swimming participated in their first Green and White Meet which included 8 individual events and 2 relays.  The teams were evenly matched with the Green Team’s Sofia Knoblock dominating the 50 butterfly and 100 individual medley and the White Team’s Janie Doyle scoring big points in the 100 Freestyle and the 50 Backstroke.  Ella Hynds won the 50 Backstroke and Tony He took the 50 Breaststroke.  This season many of our new swimmers have made huge strides dropping multiple seconds in the 50 Freestyle this week including Ethan Zhang and Jenelvis Rodriguez dropping 3 seconds, Kaitlyn Xia improving by 4 seconds, Maddie Poole and Ella Foulkes taking 5 seconds off their times, Ruthie Spencer lowering her time by 6 seconds, and Jean Jin dropping a whopping 7 seconds in the 50 Free and 8 seconds in the 50 Breaststroke.  The next Green and White Meet will be a captain’s meet in two weeks.  ​

Boys Varsity Swimming & Diving:
3:27.99.  In swimming, winning sometimes can come down to just a hundredth of a second.  In a COVID season that has impacted both practice time and taken away live meets, we have focused our training on technique and doing the basics right.  With every flip turn or hip bridge – it matters to do them right.  We have also discussed nutrition and how eating right can make you a faster swimmer.  When the time comes to race, hopefully, you can put all this knowledge together to put yourself in a position to win by a hundredth of a second.
On Wednesday, February 17th the varsity boys had their second “virtual” meet against the 2017 squad from Hotchkiss.   It was a meet to behold!  Up to the diving break, the boys held an eight-point margin.  However, over the next four events, their lead slipped and the boys found themselves down by six points after the 200 Free Relay.  There was definitely some ground to make up in the final three events – the 100 Backstroke, 100 Breaststroke, and 400 Free Relay.  With excellent swims by Totton Heffelfinger and Robert Amundson in the backstroke and Forrest Gao taking first in the 100 Breaststroke, the boys had a slim 1-point lead heading into the final relay.  In relays, first place gets 8 points, second gets 4 points, and third gets 2 points. So, the only way for the DA squad to win the meet would be to take first place in the final event, the 400 Free Relay.  We knew that Hotchkiss could go a time of 3:28, so our goal was to beat that time.  The final relay of Ashish Sharma, Mark Cai, Totton Heffelfinger, and Robert Amundson amazed and went 3:27.99 to take first place!  Their successful margin of victory turned out to be exactly 0.28 seconds!  As the CBS announcer Jim Nantz often says…that win was one for the ages.
On Saturday, the boys’ varsity team had a Zoom meeting with Deerfield alum, Miles Smachlo who still holds the majority of Deerfield’s swimming records.  Miles is training with his Michigan college squad for the Olympics where he currently ranks in the top 20 in the world and top 3 in the USA for the 200 Fly.  The boys got to ask him questions such as the importance of weight training, what he learned most at Deerfield and carried forward to his college swim career, and tips for the college recruiting process.  Miles also graciously shared stories of his training regimen and even sent along a fly set he does at Michigan that the boys tried out in their practice that day!
It truly was a great week for the boys’ varsity squad with lots going on – our next meet (against a “truly historical” opponent) will be on March 3rd at 6 PM.

GV Basketball:
This weeks team highlight was our green and white scrimmage on Friday evening.  We had refs, uniforms and even student fans!  Angie Czeremcha led her team by scoring half of their points, finishing with 25.  Meghan Holland showed guts and maturity beyond her years running the point guard position for the winning team.

Girls JV Squash:
The Girls JV Squash team had another strong week filled with music from the 2010’s.  They practiced their rails and their boasts, and they persevered through a particularly busy week.  The players capped the week off by playing a number of competitive challenge matches.  At the end of Friday, two girls moved up the ladder: Marnie Todd (’23) moved up to number 7, and Annalisa Fang (’22) reclaimed the number 11 spot.  We look forward to welcoming back two players (Hunter Pulliam ’22 and Kate Stenger ’22) in the near future!

Boys Thirds Basketball:
The team continues to find balance during the week between drills, small-sided games and scrimmages. The coaches will be starting to keeping score in the scrimmages ahead!

Girls Thirds Squash:
The team began the week in drills, moving from court to court working on lob serves, body serves, rails, and deep shots. Then, with no co-curriculars meeting on Thursday, we bumped up our second challenge night to Wednesday, giving us back-to-back challenge matches. Most of the team continues to improve at the same rate, keeping the ladder unchanged. The exception was Neha Jampala’s striking three-game victory over her co-captain, Clara Chae. Neha will look to keep climbing as she takes on fourth-ranked Charlotte McIntosh this week.

Girls Varsity Swimming & Diving:
We “raced” against Loomis’ times from 2018 last Wednesday and almost beat them. The girls had a lot of fun with this new type of competition and we are looking forward to doing a Green vs. White meet this Wednesday within the team.

Girls Thirds Basketball:
Thirds girls basketball had another good week, although we really missed our members who weren’t here – it’s not quite the same without them! The remaining members branched out into other ball sports this week, showcasing some impressive football throws that had the coaches in awe. Otherwise, we continued to work on core tenets of basketball, culminating in a 1-on-1 tournament on Friday. We also had our regular weekly circuits, as well as games such as Knockout and Horse. Another fun week on the thirds girls basketball court!

Boys JV Basketball:
The highlights of the past week were concentrated into Friday’s scrimmages. The team was split into three squads of six. The first two games were 20 minute running time affairs, but we ran out of time and had to shorten the third game to a 10 minute contest. The first game was perhaps the best of the night with two fresh teams attacking the basket and pushing the pace. Player of the game for the first game winners was  Oscar Patton ’23 who did a little bit of everything, rebounding, playing strong defense and continuing his strong scoring ways, driving decisively and persevering on the offensive glass. Tysean Price ’22 and Moises Castillo ’23 were key elements in helping their team to victory in that exciting initial game, impressing with consistent defense, poise on the ball and smart movement off the ball. On the other side, Will Stultz ’22 provided steady command of the ball along with his own array of slashing moves to the basket and floating pull-up jumpers. Eddy Rena’24 contributed on both ends hitting a particularly nice running floater in the key, and Barack Mwesigwa impressed as well. The second game was not as close of a contest as the winners of the first game just didn’t have much gas left in the tank after that tough first game. But that also doesn’t take away from the excellent all around play showed by Tommy Leimkuhler ’22 and Kiernan Keller ’23 who led the on both ends of the court. John Patton ’23 and Michael Fadugbagbe ’21 really made their presences felt under the basket. The third game was a real nail biter with both teams struggling to score. Henry Griffen gave his team steady ball-handling and smart defense. Zhexuan Li made an excellent block out and defensive rebound late in the game to help his team secure their win for the day. So in the end, all three teams won a game and lost a game and most importantly the guys really put forth a great effort and there were a lot of fun moments and good basketball plays. We are really excited for our  scrimmage days (6:15 on Thursday and 5:00 on  Friday) in these final two weeks of play. Please join us on live stream for these scrimmages if you can. It’s really fun to watch these guys play. 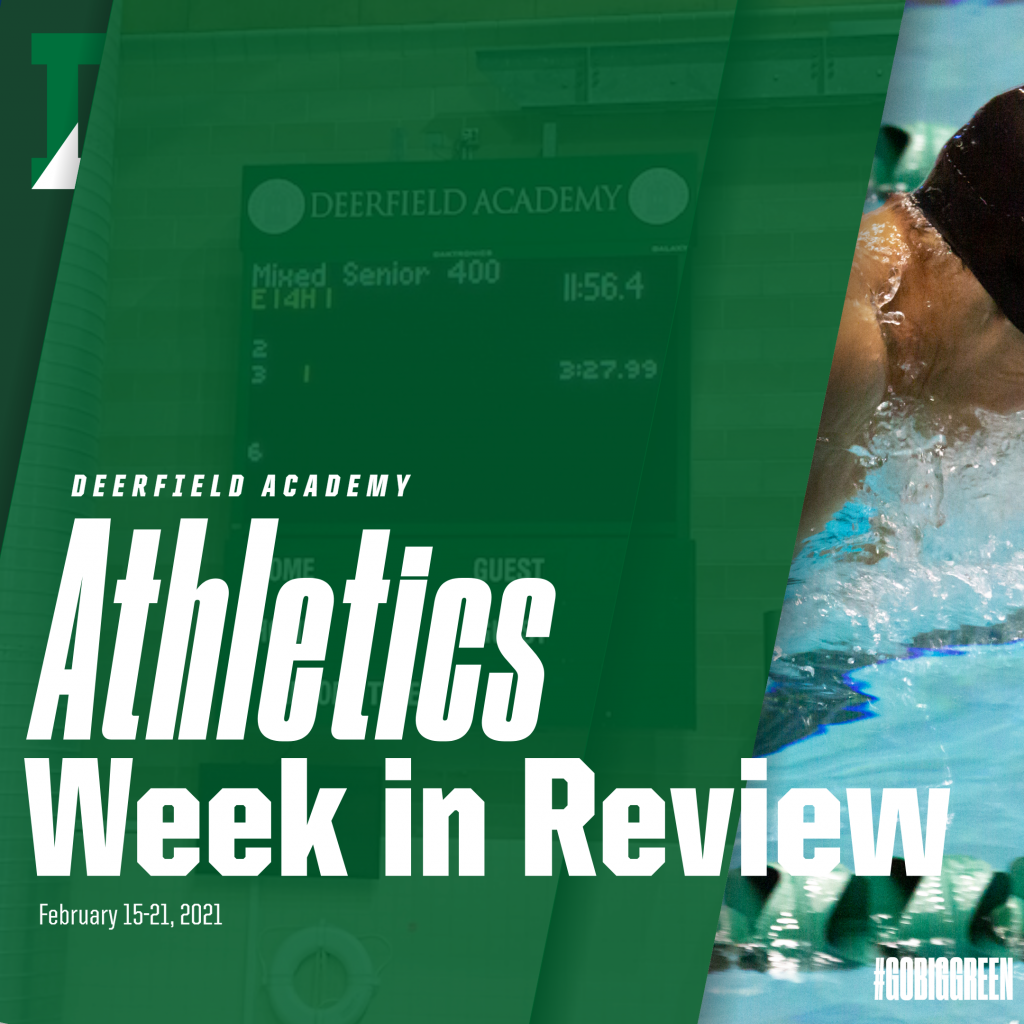