On a rainy and cool Sunday afternoon, Deerfield took to their wet fields and court, hosting the Big Blue of Phillips Andover. On the day, the Big Green earned five big shutout victories, posting an overall 6-2 record versus the Big Blue. 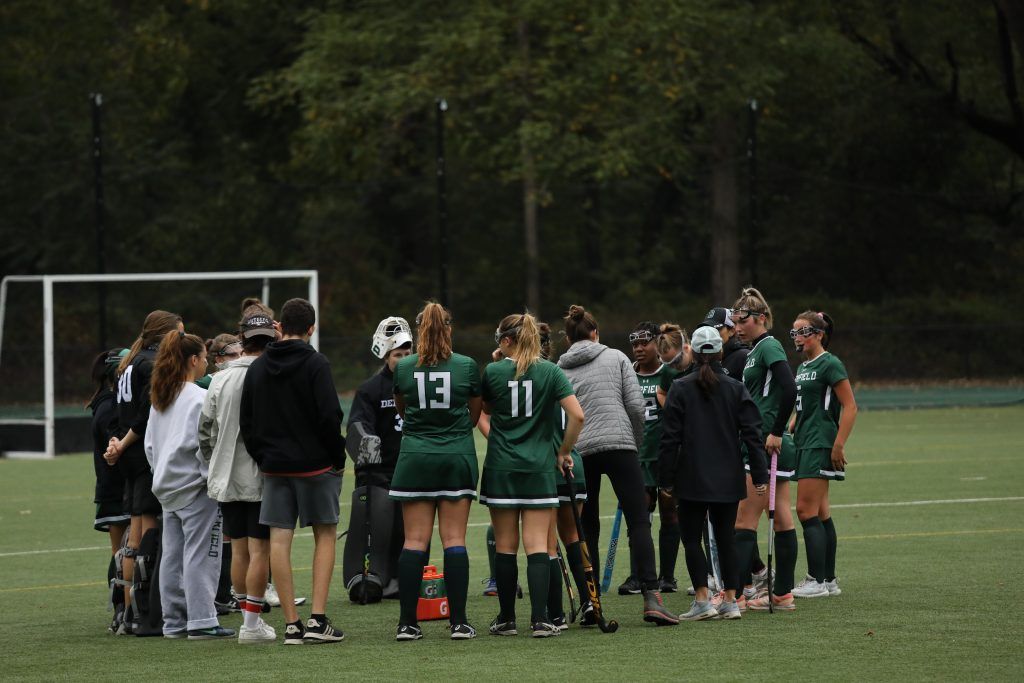 To kick-off the day, the varsity field hockey team faced the 2018 New England Champions, Phillips Andover team. Defying the weather conditions, DA played a strong offensive game.  The team’s layering and hustle helped them hold and regain possession and their communication allowed for their efforts to be rewarded all over the turf.  While there were many attempts, Deerfield’s Maddy Zavalick ’22 scored the only goal of the game during the first-half.  She placed the ball perfectly in the corner of the net to put Deerfield ahead by one on the scoreboard.  In the second half, the play remained competitive with the teams’ exchanging possession and chances at goal. Liv Mikesell made two big saves in goal for the Big Green to preserve the shutout and victory. With the win, the Big Green improve to 11-2 on the season and will return to action this Sunday at Greenwich Academy.

Next up, the boys varsity soccer team hosted the Big Blue on the Fair Field turf.  The first half saw back-and-forth play but no goals, with both teams creating scoring opportunities. The Big Green broke the stalemate 10 minutes into the second half: left-midfielder Sam Bronckers ’20 flicked the ball down the wing to center-forward Marcel Aziamale ’20, who shimmied forward and into the box, eluding his mark, and slid the ball to center-forward Skye Bacon ’20, who drove the ball into the near corner from the left side of the goal.  Ten minutes later, Bacon again converted a ball from Aziamale, but only to have the goal disallowed due to a hand-ball call against a Deerfield player.  Andover pressed forward and came close to equalizing, but the Big Green defense were able to neutralize their efforts, earning the team’s and goalkeeper Ben Diffley’s his first shutout of the season and the big win! Today, the boys varsity soccer team will travel to Wilbraham & Monson for a midweek road game.

Moving inside to the warmer confines of the Barn, in a well-matched contest between two strong volleyball teams, the Big Green prevailed over the Big Blue by a score of 3-0. Deerfield got off to a great start in the first set with strong serves from Camila Navarro ‘20 taking Deerfield to a 5-0 lead. Good passing allowed Deerfield to eventually extend that lead to 18-8 before winning the set, 25-14. Deerfield looked like it might be able to similarly control the 2nd set, getting out to leads of 8-5, 13-8, and 16-10, but Andover’s strong middle hitting and serving brought them to a lead of 19-20. Some long, hard-fought rallies went both ways but Andover held the lead at 21-23 and then had set point at 23-24, but clutch serving from Georgia Sackrey ‘23 and amazing passing/digs from Daphne Gavros ‘22 brought the crowd to its feet and Deerfield ended up winning the set 27-25. The 3rd set was hard-fought from the beginning with neither team able to get out to a big lead. Good passing and hitting from both teams led to long rallies. Evan Burkert ‘21 and Lara Akande ‘20 battled successfully in the middle against Andover’s strong attacks and blocks, Rosa Sun ‘21 found her setting form after being out for the last week, and Zoe Gavros ‘23 attacked effectively from the front row and the back row. In the end, Deerfield won the set, 25-21 for the team’s ninth victory of the season. The Big Green will make the trek to Taft this Saturday to battle the Rhinos in their next contest. 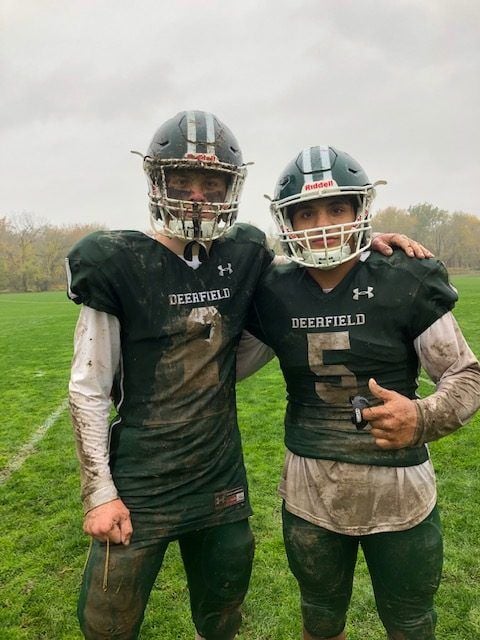 Returning to the rainy and cool conditions outside on Jim Smith Field for the varsity football game. Deerfield earned their second home win of the season, shutting out Philips Andover by a score of 14-0. In the conditions, both offenses had a hard time executing their plays.  Deerfield’s running back Griffin Schutz scored both touchdowns on the ground for the Big Green.  The first was a 17 yard run in the first quarter.  The second touchdown came on a 60 yard run on the opening possession of the 3rd quarter.  The defense did a great job in pass coverage: Porter Hollen and Donnie Gray had numerous pass break ups and Luke Terry had two interceptions on the day. Deerfield’s punter, Matt Pecora was called upon numerous times and had some of his longest punts of the season in tough kicking conditions. With Saturday’s win, the Big Green improve to 5-2 on the season and will return to action this Saturday on the road at Cheshire Academy.

The girls JV volleyball team defeated the Big Blue 3-0 in a closely contested game(25-21, 25-20, 25-19) and in the south division fields the boys JV soccer team were victorious, 2-1 over their Andover opponent.