The first round series between the New Jersey Devils and Tampa Bay Lightning is particularly meaningful for Deerfield, as two alumni are going head-to-head in this match up. Ben Lovejoy ’03 is a defensemen for the New Jersey Devils and Alex Killorn ’08 is a forward for the Tampa Bay Lightning. Although their paths never crossed on the ice at Deerfield, they share the Deerfield hockey brotherhood connection. On the ice today, there will be no love lost, as both NHLers are going one-on-one. Lovejoy is trying to stop Killorn and the Lightning in their offensive zone meanwhile, Killorn and his teammates are trying to put the puck in the back of the net past Lovejoy and the Devils defense and netminder. So far this series, Killorn has netted four goals against the Devils securing the seventh spot in total points for the Bolts this season. In game three, Lovejoy also contributed to the score line, adding the end-of-game empty netter on a back-hand from his defensive zone to seal their first win of the series.

It all comes down to today’s game – game five! In the first round of the NHL’s Stanley Cup playoffs the Tampa Bay Lightning and the New Jersey Devils face off this afternoon in the fifth game of the best of seven series. Tampa Bay leads the series 3-1. The Lightning hope to earn their fourth victory today and clinch a spot in the Eastern semifinals. Meanwhile, the wildcard New Jersey Devils want to push the series to another game, but they must win today for the series to continue.

Tampa Bay won game one of the series 5-2 and notched another 5 goals in game two to defeat the Devils 5-3 and take a 2-0 series lead. In game three, New Jersey took advantage of home ice to cut the Lightning’s series lead in half with a 5-2 win. On Wednesday, Tampa Bay extended their series lead to 3-1 with a 3-1 win.

Game 1: Killorn scores 4th goal of the game and 1st of the playoffs

Game 2: Killorn his 2nd and 3rd goal of the series

Killorn is a Halifax, Nova Scotia native however, he grew up in Beaconsfield, Quebec where he played minor league hockey. The Tampa Bay Lightning selected Killorn in the 2007 NHL Entry Draft during the summer before his senior year at Deerfield. He went on to play collegiate hockey at Harvard and in his senior year for the Crimson he was selected to the 2011-12 ECAC Hockey First Team. In 2012, upon graduation, Killorn signed an NHL entry contract with the Lightning and he has been with the franchise ever since. In 2015, the Bolts made a deep run in the Stanley Cup playoffs advancing to the finals where they faced the eventual Stanley Cup champion Blackhawks.

A Concord, NH native, Lovejoy graduated from Cardigan Mountain School before coming to Deerfield. After DA, Lovejoy played one year for Boston College and three years at Dartmouth College. During his junior year in Hanover, Lovejoy turned down his first NHL offer from the Montreal Canadians, but it was not long before the NHL came calling again and in 2008 Lovejoy signed an NHL contract with the Pittsburg Penguins. After five seasons with the Penguins, Lovejoy was traded to Anaheim, and before long, he returned to Pittsburg where he and the Penguins won the Stanley Cup in 2015. In 2016 Lovejoy was traded to his current team the New Jersey Devils. 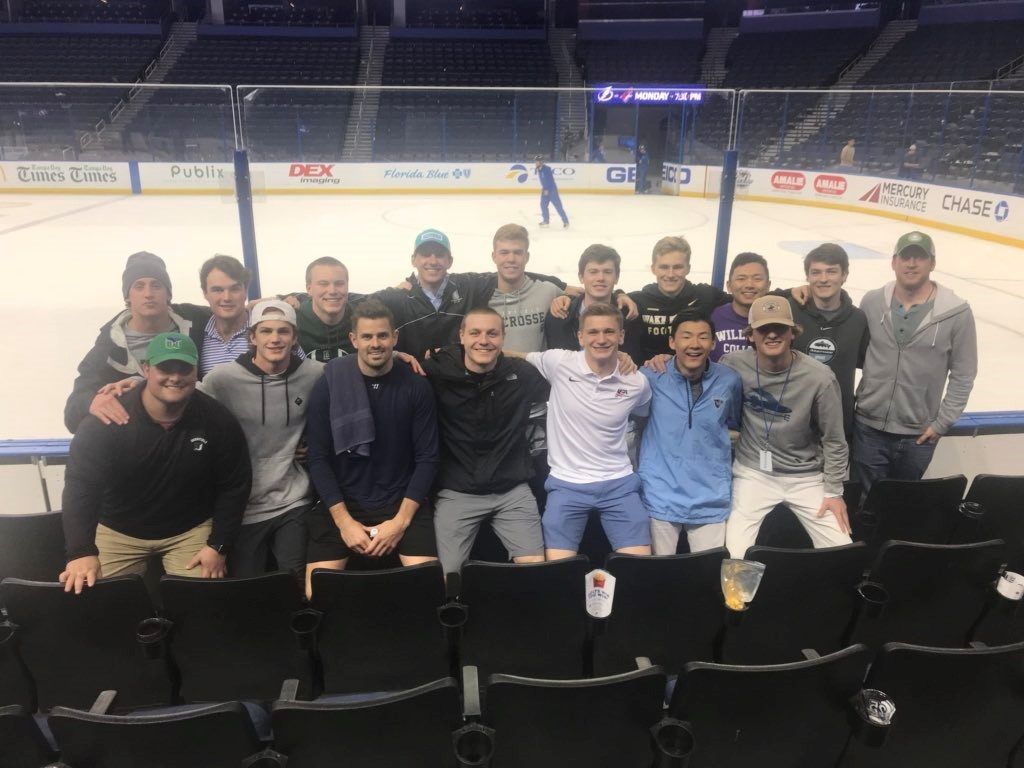 Ben and Alex are great ambassadors for the game of hockey and Deerfield. Recently, Alex entertained the boy’s lacrosse team while on their pre-season spring trip to IMG Academy. The seniors on the team enjoyed watching Alex in action on March 20 against the Toronto Maple Leafs where Alex notched the game-winner in the Bolts 4-3 win. Post-game, Alex took the time to wish the Big Green teammates good luck on their upcoming season!

Last summer, Ben and his family returned to campus to visit the construction site of the new Deerfield Athletics Complex, which boasts 130,000 square feet of new construction that will house the new ice rink, home to Deerfield’s hockey teams. He welcomed Deerfield’s hockey coach, Tim McVaugh to his home in New Hampshire to reflect on the game and share lessons learned during his time as a Deerfield student-athlete.

Deerfield hockey fans will be tuning in this afternoon, cheering for both sides. Although both Alex and Ben will valiantly “leave it all on the ice” in hopes of getting to play one more game this season. If Tampa Bay wins, it’s on to the next round and if New Jersey wins they stay alive in the first round series…either way, Deerfield wins!