The boys varsity hockey team earned two victories in their back-to-back Friday-Saturday games, extending their current winning streak to two games and improving their season record to 10-9-4 as the chase for playoff spots heightens.

On Friday night, the Big Green hosted neighboring Williston for Friday Night Hockey in Deerfield, which featured an 80s themed Deerfield student section that was packed from the glass to the top of the stands. Their energy helped to propel the Big Green to a 6-2 win over the visiting Wildcats.

Connor Guest ’20 opened the scoring for the Big Green in the opening minute of the first period to give the home side the early advantage (assists to Kyle Jarosz ’20 and Ben Zimmerman ’21).

Williston scored an equalizing goal later in the first period and scored again to open the second period, to go up 2-1. However, this would prove to the only lead that the visiting team would have during the game.

Later in the second period, the Big Green scored three consecutive goals to regain the lead. Alton Machen ’20 registered his first goal of the game, equalizing the score, with an assist from Ben Zimmerman. Pierce Patterson ’21 then scored the go-ahead-goal with assists to Jarod Harrington ’20 and Jake Higgins ’20. In the end, Patterson’s goal proved to be the game winning goal. Connor Guest again etched his name on the game’s score sheet, scoring his second goal of the night to extend the team’s lead to 4-2 at the end of the second period (assists to Alex Robert ’20 and Jarod Harrington). 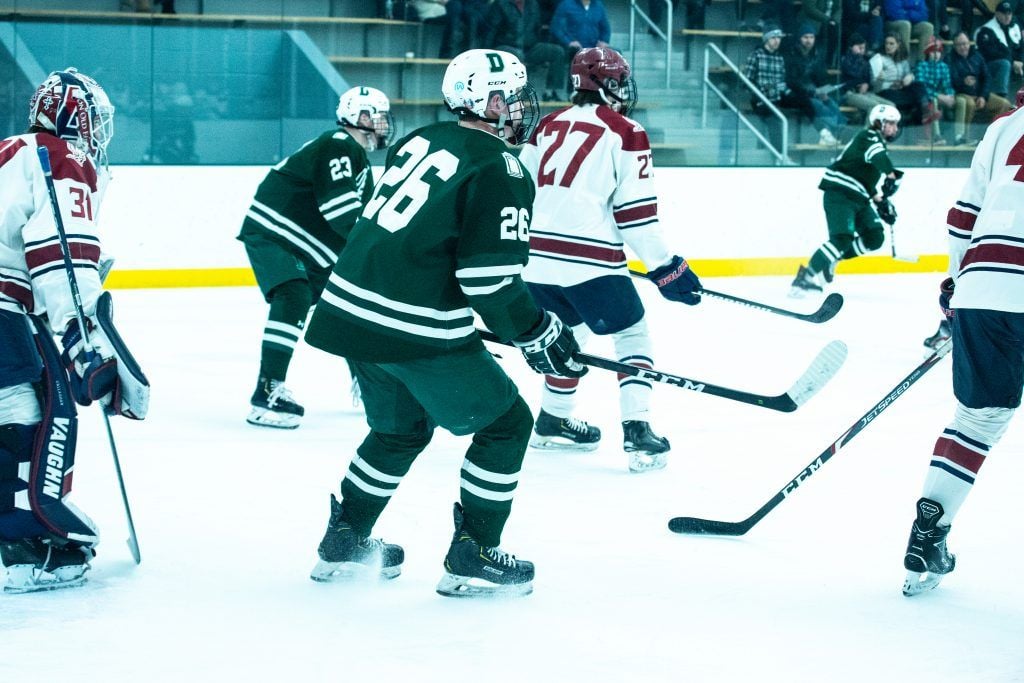 The Big Green continued to threaten in the offensive zone in the third period, resulting in two more unanswered goals by the home team. Kyle Jarosz added the team’s fifth goal of the night with assists from teammates Alex Robert and Jarod Harrington.

Connor Guest earned a hat trick in the game, capping off the scoresheet with his third goal of the night (assist to Alton Machen) and helping the Big Green earn the 6-2 win over visiting Williston.

The Big Green quickly returned to action the following day in an away contest at Exeter.

Showing no signs of heavy legs from the previous nights’ game or the bus ride to Exeter, the Big Green jumped ahead to an early 2-0 first period lead over the home team. Isaac Abbott ’22 registered the first goal of the game and of his career as a Door (assist to Sam Mackenzie ’21).

Later in the first period, Eamon Doheny ’20 doubled the team’s lead with a goal of his own (assists to Alex Robert and Jarod Harrington).

Deerfield continued to add to their lead in the second period when Jarod Harrington netted the team’s third goal of the game (assists to Pierce Patterson and Alex Robert).

Alton Machen extended the Deerfield lead in the third period with an empty net goal (assists to Jarod Harrington and Pierce Patterson). Exeter again tried to cut the lead by netting two goals of their own, but it was not enough. The Big Green prevailed to earn the road win, 4-3.

The Big Green return home for their final two regular season games. They will face off against Kent this Wednesday, 2/26 at 4:15pm and battle Westminster on Friday, 2/28 at 6:00pm. Tune in to watch both games on livestream.