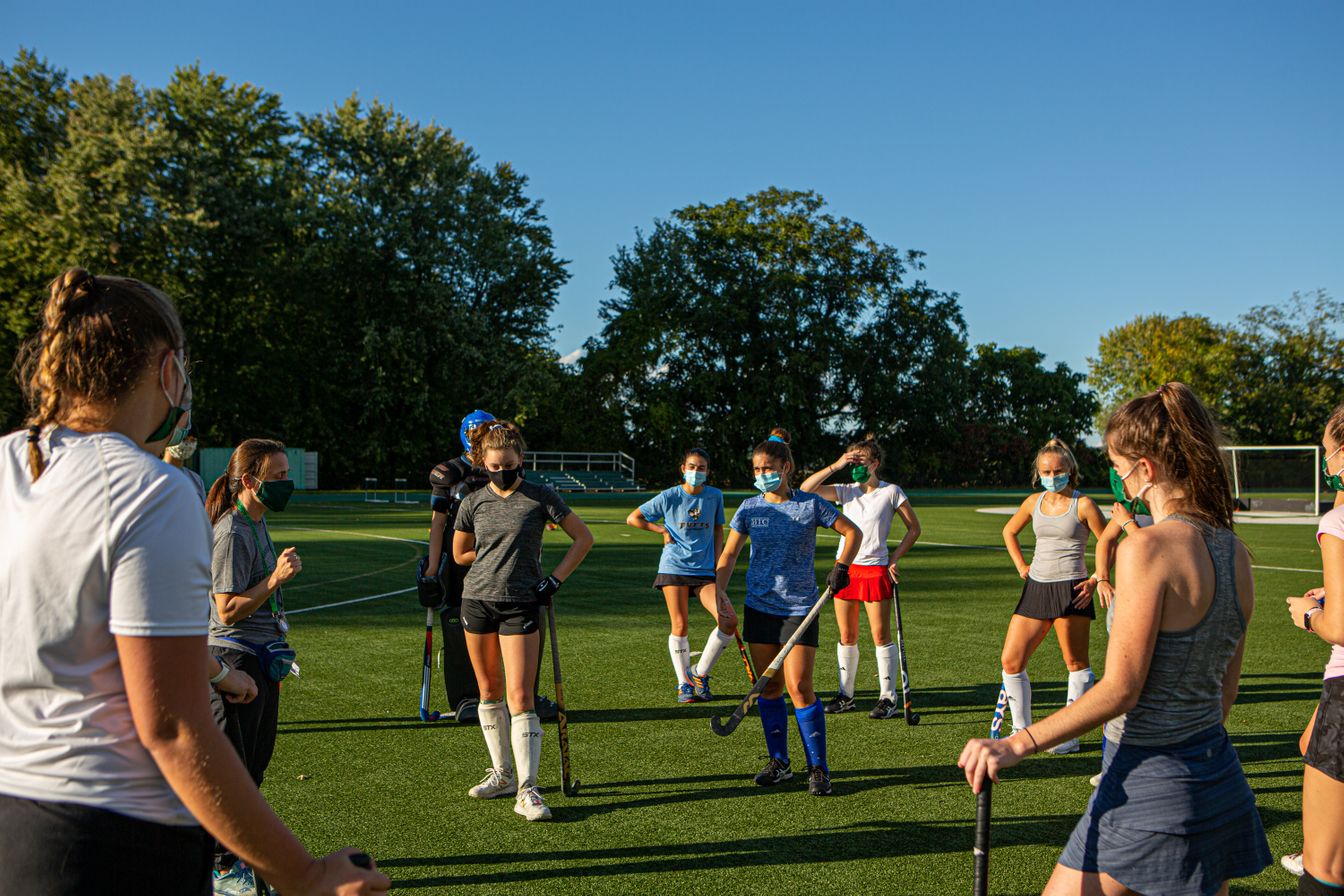 The second full-week of team practices are complete, learn more about each of our fall in this week’s team recaps.

Varsity Field Hockey:
After a full week of conditioning, drills, and games, the team started off their Saturday morning practice with a nice sunny jog on the small loop before they gathered to tie-dye socks in preparation for next week’s “competition day.” Monday’s practice focused on hits and sweeps, while Tuesday’s work was centered on reviewing defensive drills. On Wednesday, the team did some strength and conditioning work with Emma in the fitness center. Thursday was competition day and we were able to do our first modified scrimmage!  Seniors led the team in a game of Kick the Can for our Fun Friday practice, and have demonstrated all week the ability to lead this group with positive spirit and optimism.

Boys Water Polo:
Limited by time and space in the pool but not commitment, the boys and girls practicing water polo this fall are focusing on the future.  Without having to prepare for games, the athletes can enhance their individual skills.  Over the two weeks of practice, the players have seen and felt the improvement in their ball handling, passing precision, and shooting form.

Girls Varsity Volleyball:
This past week in varsity volleyball we have been adding more hitting, including practicing hitting from all three front-row positions. It gives our setters more of a challenge: reading the pass, knowing the position of the hitters, and then reliably making the set to put our hitters in a strong position. We also continue to work on passing: we use the agility ladders to emphasize quick feet and movement and then getting into a good, low passing position. And we challenge ourselves as a team with cooperative and competitive drills in serving.

JV Field Hockey:
In these first days back under extraordinary circumstances, and after an early hike to the Rock and subsequent sorting out of inevitable uncertainties, we’ve had two good weeks of JV Field Hockey. After a round of drills with Varsity during our second week of practice, we sent a couple girls on to that upper level, but are happily now settling into our own group for the remaining weeks of the season. With good spirits and positive attitudes all around, our three senior captains, all returners and veteran JV players, have helped establish great energy, essential in keeping the team going. We’ve welcomed a couple new-to-the game athletes and players coming up from Thirds, and this week we’re preparing for our first day of scrimmaging. As we progress through the season, it will take an extra effort on everyone’s part to stay focused, drawing on our own resources rather than depending on the exterior force of an opponent and real games to keep us moving and motivated. The girls have brought awesome energy each day so far, and we look forward to a great season, albeit quite different from the past, but fun and rewarding all the same!

Girls Varsity Soccer:
The girls varsity soccer team has continued to perform and challenge themselves in our second full-week of training. The three themes that we have focused on during the opening weeks are effort, focus and opportunity. We have done a lot of technical work and combination play. As we transitioned into socially distanced possession to goal we are seeing our technical work and combinations at play. The girls are working hard, they’ve had great focus and we are taking advantage of the opportunity we have to improve and grow as a team. We are looking forward to another great week of training! 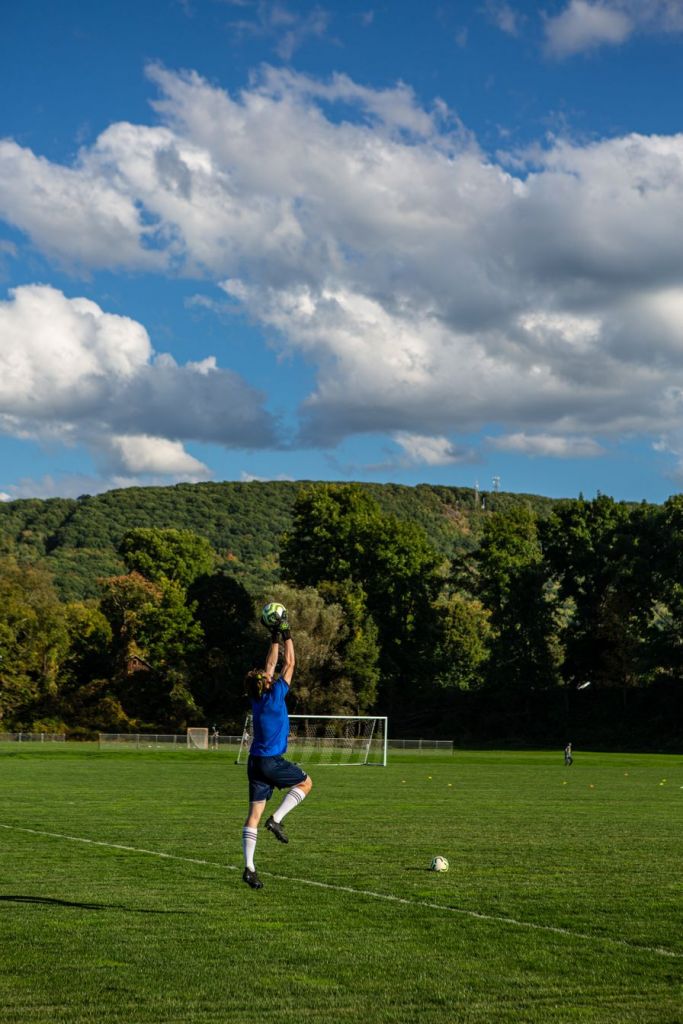 Boys JV Soccer:
The boys’ JV Soccer team has accomplished team-hood, which, in non-Covid times, can easily find the back burner to wins and losses. I can recall squads at different schools not really finding their way into team-hood until mid-season or later; there was playing time, celies, yellow cards, and trash talk distracting us from the big goal. As a coach, it was easy to let winning the next game become something of a false goal. And when the game was over, win or lose, the next practice was like starting all over again. Without competition, however, sustaining the good feelings at, during, and after practice has come in stark focus for Coach Arceo and me. Such an accomplishment is like cresting a mountain only to find taller and more inviting mountains beyond. The boys are enjoying each other and the beautiful game, and this has driven them to play well and to play for and with each other. Most notably, when we added a few latecomers to the roster, the team reflexively absorbed them without a hitch. They increased our numbers and enabled our drills to grow more sophisticated and complex. La ronda became Las rondas. We are proud of this group’s maturity and eagerness to be together as comrades on the pitch.

Boys Fourths Soccer:
This week, quad squad continued their undefeated streak that began all the way back in September of 2019! The team has continued to bond from the early weeks of the season and brings a ton of enthusiasm to practice every day. We’ve been working on basic skills like trapping, throw ins, and passing, while mixing in as many scrimmage-esque drills as we’re allowed. Today at practice, Taiwan shocked everyone and won the World Cup. Short field games and 2v2 drills with a keeper are always crowd favorites. While we hope to play games or at least scrimmages against other DA teams later in the season, the team works hard to get better every day.

Boys Thirds Soccer:
Deerfield Boys Junior A Soccer has been working hard over the last three weeks, taking advantage of the limitations on practices to improve our fundamentals and conditioning and come together as a team. During our rotations of passing, touch, and shooting drills, the squad has been led by the especially committed performances of Thirds returner Tyler Ettelson, 2019 Junior B veterans Will Stultz and Jack Willett, sophomore Thomas Lu, and new DA students Carson Belaire and Joe Morsman.

Girls JV Volleyball:
JV Volleyball is off to a great start this year.  Coach Carroll has been challenging the team with new drills meant to better basic skills and court positioning.  The highlight of our week was being able to spend our Saturday practice at the outdoor Volleyball area.  In spite of trying to manage the higher net and the sun in our eyes, we had 90 minutes of fun, fresh air and some good cookies.  The team is a mix of new and returning students and we are all enjoying getting to know each other.  We will be led this season by Captains Emma Weech, Jessie Rooney, Abby Persons and Angela Osei-Ampadu.   With a team of 19, we hope to start forming sub-teams and playing scrimmages amongst ourselves.    With all players already showing great improvement in their skills, our scrimmages are sure to be competitive and fun.  Stay tuned.

Girls Thirds Soccer:
After a few days of getting to know each other and assessing the levels of skill we have on our team.  We have had our players working on their general soccer skills this week.  We are all excited to move to a phase where we can compete and play games.

Girls Cross-Country:
This week the girls cross country team continued to make the most of the beautiful fall weather by running a mix of long runs, workouts, and recovery runs. We spent the week building towards Saturday morning, when the team ran their first 5k on the course! Despite the unusual circumstances, every team member brought a positive and determined attitude, and it was wonderful to see them take on the course as the mist lifted to make way for a perfect autumnal morning.

Boys Cross-Country:
Many of the Deerfield harriers came into the season with some aerobic training under their belts. Last week, the runners built upon that foundation, added in some speed, power and mechanics with shorter interval work, practiced and refined their recovery habits, and then hit a hard time trial on Saturday. Several runners outperformed expectations on the trial, and most others met expectations. All runners have more work to do to meet their potential, but they have done good work over the first couple of weeks of training despite the necessary challenges of quarantine protocols. This group could lead the way into a strong culture of boys distance running at Deerfield, if they choose to do so.

Varsity Football:
The 2020 Deerfield Academy football team has been focusing on the little things thus far this fall.  The team energy, effort and enthusiasm every day has been noteworthy as this group continues to develop.  Team speed and efficiency are early season goals for the group. This year’s team returns 10 starters from the standout team that knocked off Choate and rallied for a bowl win over Milton just a year ago. The seniors have been leading the way thus far at practice and the young players have been competing day in and day out.  One of these competitions took place on Thursday 10/1 at the end of practice where the entire team participated in a plank hold challenge.  It was clear that the elite group of “plankers” was not about to back down as their teammates cheered them on.  Finally, after 13 impressive minutes of being in a plank Teddy Pappas barely edged out friend and Buckley teammate Julian Navab.

Boys Varsity Soccer:
Boys Varsity Soccer has had a high energy and productive week of practice. We have been focused primarily on our style of play, possessing the ball, and raising our collective skill level. Training has included: short-duration high-rep technical work, combination passing/shooting, and one and two-touch socially distanced possession work. The highlight of the week so far has been to see some of our technical and combination training appear in our possession play. We’re looking forward to this next week of practice and continuing to improve as a group. 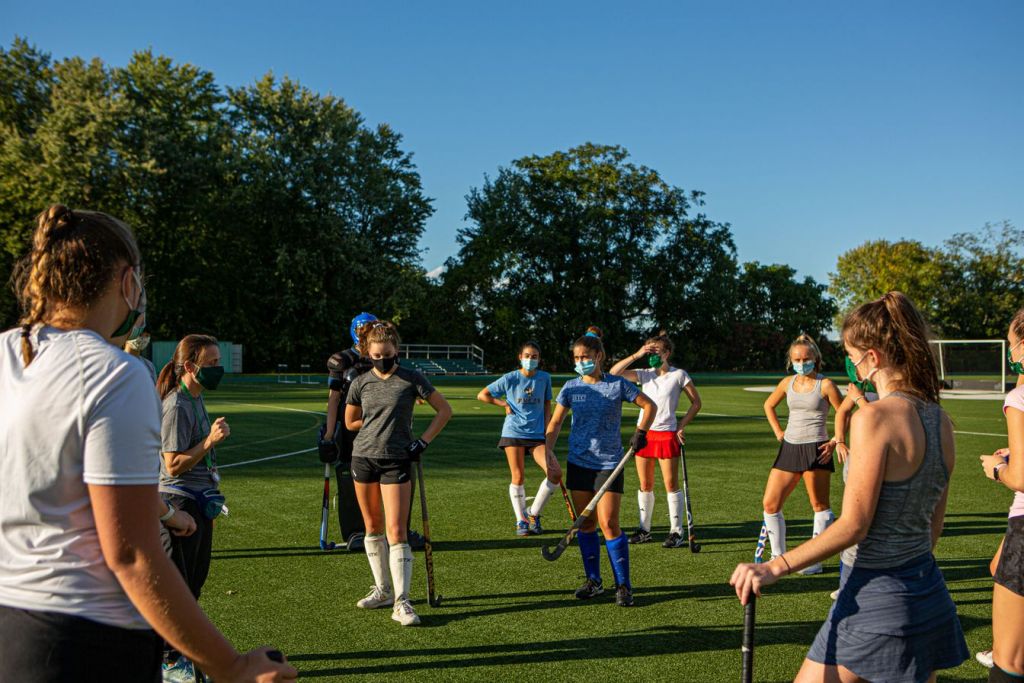