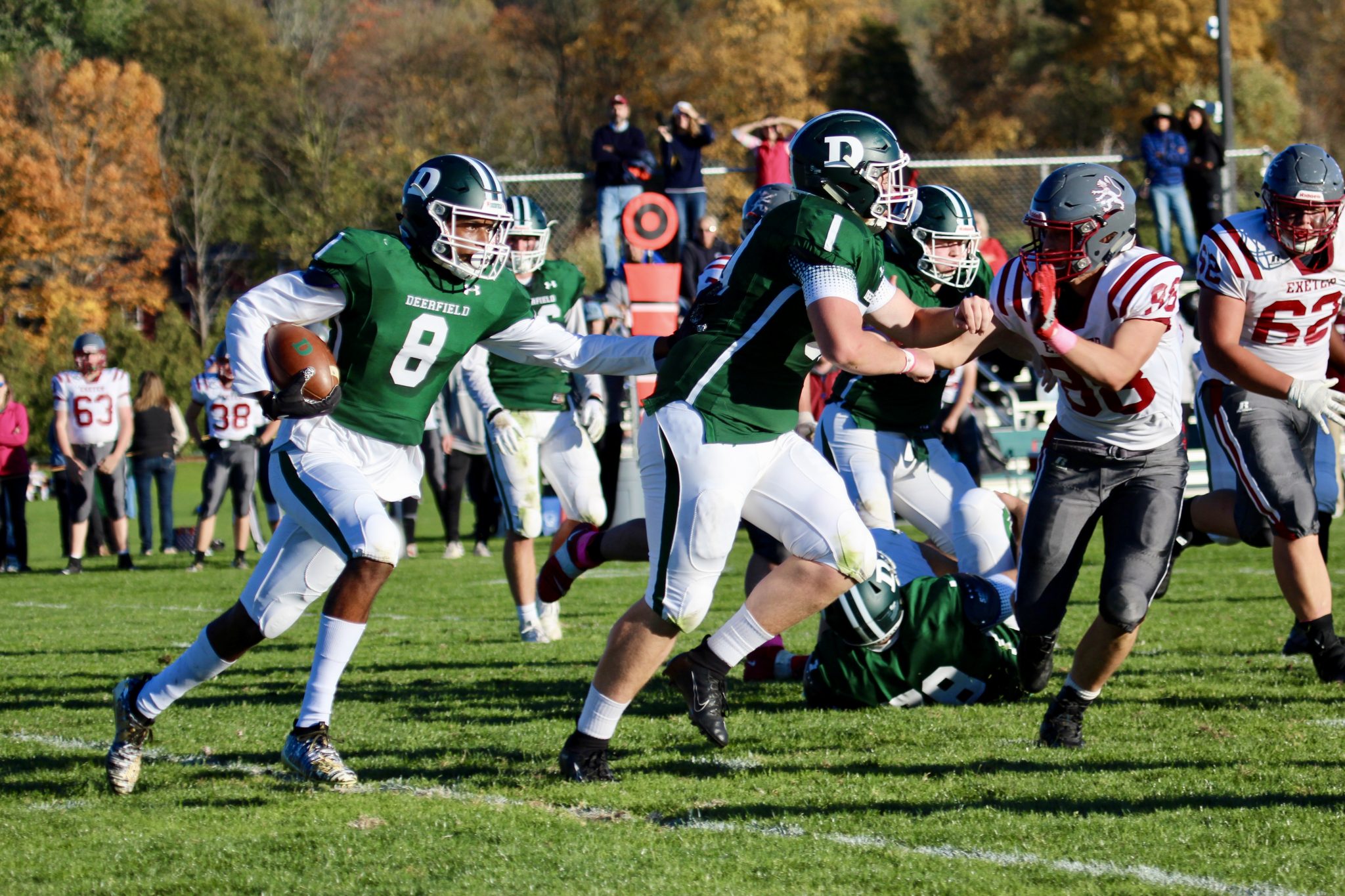 Another great week of practices for Big Green teams as they prepare to kick-off their green & white scrimmage schedule this week!

JV Field Hockey:
Rainy days played a role in our practices this week, which allowed us to focus on team bonding. On rained-out Tuesday, our fabulous captains put together a game of Field Hockey Jeopardy, with questions that ranged from “Who won last year’s NCAA Championship?” (UNC) to “How many pets does Ellie’s family have? Extra points for pet types and pet names!” A good time was had by all. Wednesday’s weekly scrimmage, played on one of those iconic and beautiful Western Massachusetts Fall days, ended in a tie, with some really great performances by new and returning players alike. Thursday’s ‘practice’ was a plein-air yoga class, taught by professional yoga instructor Lesley Crosby, as we prioritized taking advantage of one of the last sparkling autumn days before the daylight and season both change. Friday afternoon, wet and also cold, proved to be the perfect weather for a scavenger hunt in the gym. So the captains divided the girls into four separate teams, each taking 11 pictures as they hunted down need-to-know info (Temperature of the pool water! Birthday of an Athletic Trainer! Best view from the gym!). These photos—all of which were required to include all team members—will provide a fantastic end-of-season slideshow at our final gathering in November. As ever, this wasn’t a “regular” week of field hockey, but the girls had fun—and they learned a little bit more about the game and each other.

Varsity Field Hockey:
It was a bit of a soggy week in Deerfield, but we embraced it!  On Monday, Dr. Austin gifted the study body a fall “Head of School” day.  While the seniors appreciated some of their afternoon practice time freed up to finish up college applications on Monday, we took to the field on Tuesday again to work on marking and communication.  We brought back the old but good F1, F2, F3 drill and made some good progress working on our defensive skills in the circle.  A full field scrimmage on Wednesday let the Green and White teams begin to practice with one another in preparation for next week’s refereed scrimmage.  After a short two-touch scrimmage on Thursday, we gathered with Emma in the weight room for a strength and conditioning circuit.  On a soggy Friday afternoon, the girls took a moment to reflect and write notes of gratitude, before a wet (remember, we embraced it!) run and hot cocoa.  Saturday yoga completed the week.  Go Big Green!

Girls Thirds Soccer:
Last week was an exciting one!  After weeks of drills we finally had the opportunity to scrimmage.  Going forward, we will be combining with the jv squad and scrimmaging once a week.

Boys JV Soccer:
As the school has entered Emerging 2.0 and after several weeks of training fitness and skills, the JV Boys soccer team has moved into more scrimmaging and team play. We split the squad into two evenly matched sides (Green and White) and plan to have three matches on our three remaining Wednesdays. The boys will have jerseys and referees and, based on what we’ve seen so far, the competition will be fierce. It’s all in good spirits, though, as the team’s camaraderie and mutual respect has continued to strengthen. On Friday, we were one of only a few teams to venture out in the rain and we ran about 1.5 miles for fitness. The boys grumbled a bit, but they were all in and made a good time of it. Coach Arceo and I continue to be impressed by their enthusiasm for the game, their patience with each other, and their generally positive attitude regardless of the conditions.

Varsity Volleyball:
Varsity volleyball got to play a competitive intra-squad scrimmage on Tuesday and it was so much fun! We tried to replicate the game-day experience as much as possible: we had an official referee, we live-streamed the match, we wore our uniforms, we had some physically-distanced fans (thank you to JV volleyball and varsity girls soccer for coming to watch!), the coaches looked amazing in their matching shoes, and Dr. Brown provided excellent snacks (a game-day tradition!). And the athletes felt that added intensity; after the first set, more than one of them commented that it felt different than a practice, they felt some of the nerves that go with playing a match. The play on the court showed it, too: great hits, strong defensive passing, improved communication, good blocking, and intelligent setting. The match stayed close the entire time with the Green team taking a narrow victory in set 1 and a slightly larger win in set 2 before the White team pulled off a great comeback to take set 3. Using what we learned from the scrimmage, we focused on serve-receive and making the transition into an effective offense for the remainder of the week and we’re looking forward to another chance to wear our uniforms on Wednesday for our second scrimmage.

Boys Jr. B Soccer:
This week, quad squad was thrilled to begin scrimmaging! The team were able to apply all of the drills and instruction from last week about offense and defensive strategies and set plays in a 9v9, full field game. The halves were short, but enthusiasm was high as the teams played several close games at each practice. The coaches evaluated the play throughout the week and fine-tuned the rosters accordingly, in preparation for the Green vs. White games, the first of which will be this Wednesday. The team is looking forward to playing matches that ‘count’, as we move into the final three weeks of the season. 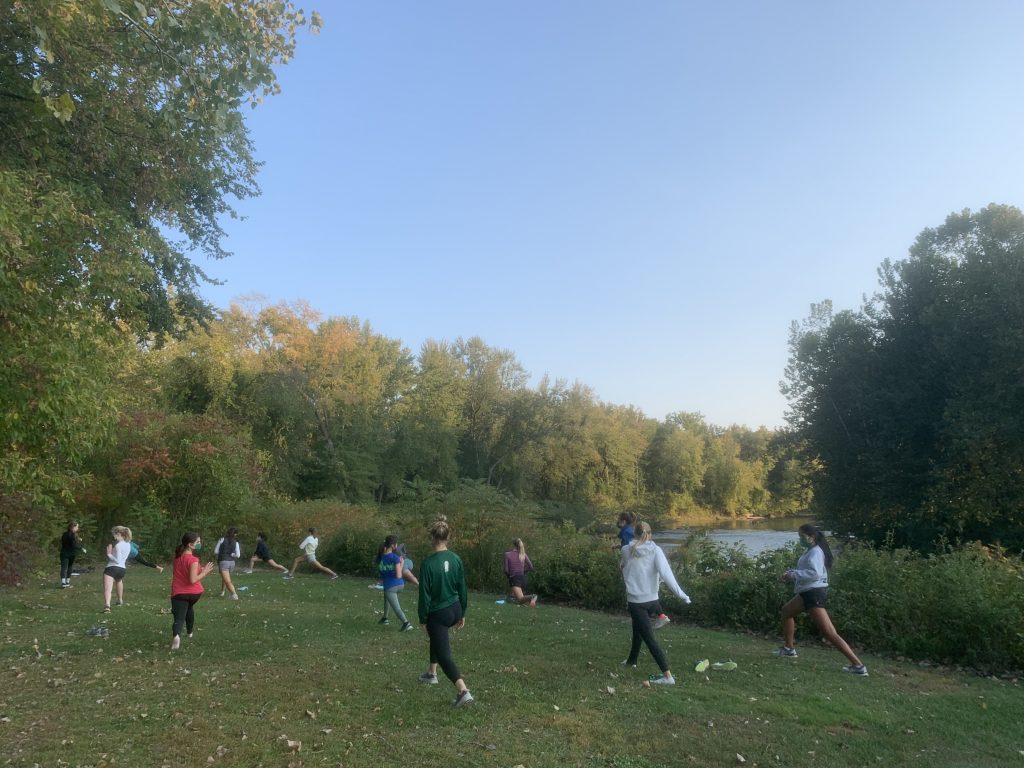 Girls Cross-Country:
The girls xc team had their first intra-team race this week, with the white team narrowly beating the green team by one point! The race happened in some soggy circumstances, but the girls kept their spirits high, gave it their all, and supported each other throughout — regardless of whether they were racing in a green or white jersey. Earlier in the week the team did their first Fartlek workout of the season, followed by some recovery runs and cross training. The New England fall continues to provide beautiful running conditions (when it’s not pouring with rain), and we are looking forward to some more long runs amongst the leaves this week!

Boys Cross-Country:
The Deerfield harriers managed to dodge the two cold and wet days this week to accomplish some valuable and effective training. On Monday, a small group enjoyed the ideal training conditions and scenic views on North Green River Road in Colrain, MA. On Wednesday, the whole team hit their first VO2 max workout of the season with long threshold intervals followed by some short and fast track intervals. Finally, on Saturday afternoon, the team split in half to compete in a “Green and White” 5k on the course. The intrasquad competition for first place was particularly stiff; at the one mile mark, Chase Whitney ’22 (team Green) led a tight pack of five runners, and at the two mile, he had three seconds over Quinn Hampson ’22 and Thomas Lyons ’21 (both team White). In the third mile, Quinn and Thomas surged into first and second, and cemented their positions as they romped to the finish. In part thanks to the efforts of Thomas and Quinn, team White took the race with 26 points over team Green’s 35. It is an exciting time of the season as changes in training should yield some solid drops in time, and the whole squad will look forward to the possibility of an asynchronous race against Williston-Northampton next Saturday. 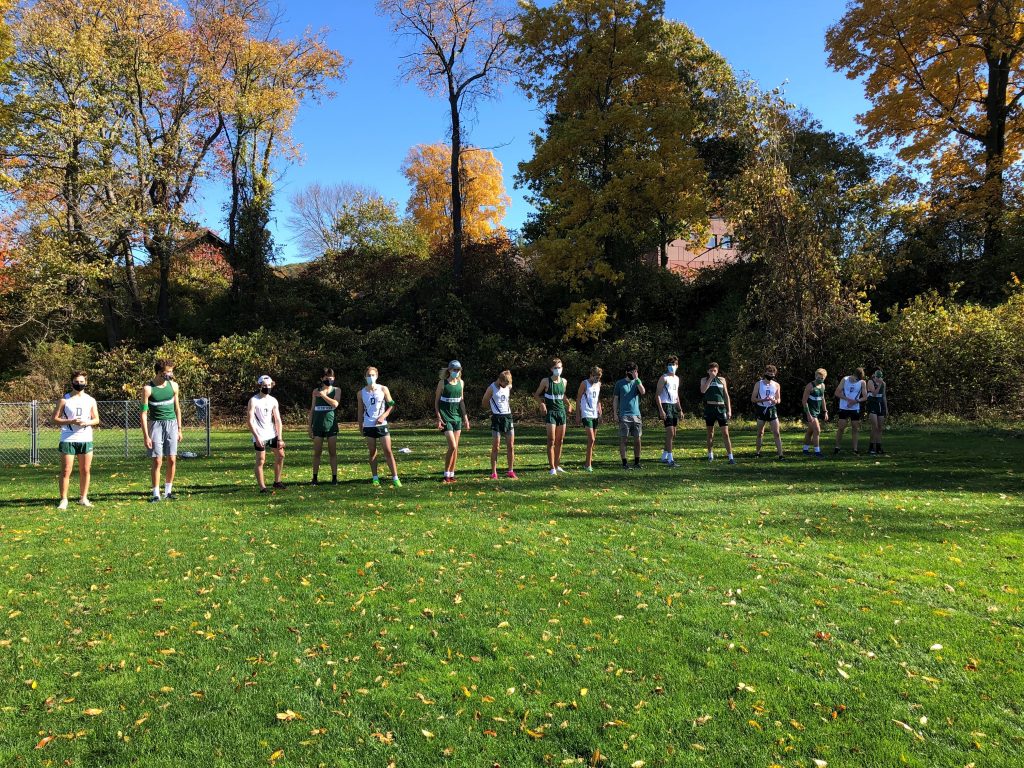 Girls JV Soccer:
This week, the JV team got to play in their first inter-squad scrimmage. Though there was a bit of rain and cold weather early on, we took advantage of the time away from the pitch to get into the fall spirit and carve some pumpkins. The girls got very creative and had a lot of fun, displaying their completed masterpieces on the steps of the dining hall. Later in the week it opened up into beautiful sunny weather, and we had a great scrimmage to finish our week together. In order to have enough players for a full match, we joined with the thirds team, and got our first taste of 11v11 play this season. Everyone was in high spirits, and it was a very even match up. In the coming weeks, we will continue to join with thirds, and have our Green and White game series. Stay tuned for game updates!

Girls Varsity Soccer:
The girls varsity soccer team enjoyed their first intra-squad scrimmage this week, with both teams scoring several goals; the white team posted a 5-3 advantage at the final whistle. The team played both 8v8 and 7v7 in the 3 x 20 minute period scrimmage and on a slightly shortened field.  The girls enjoyed and thrived in the competition! The girls collectively applied topics from practice into the game and continued to build throughout the periods of play. There were great moments of possession and combination play that resulted in chances on goal and goals scored. Playing with three in the back; our defense was put to the test and began to develop their chemistry, and were able to break up several attacks with their strong 1v1 battles and collective defense. The team will be back to work on Monday in preparation for our next scrimmage on Wednesday, 10/21!

Varsity Football:
The Deerfield football program continued to climb as competition is ramping up everyday at practice.  They say that “Iron sharpens iron” and that has been evident through our first full week in full pads.  There were key matchups between post graduate Grant Jones and Joe Lochiatto ’22 who paced our Offensive and Defensive lines.  Other notable matchups from the week include post graduate Casey Reynolds against Donnie Gray ’21.  The team ended the week with an impressive practice that showcased a successful 2 minute drill, a precisely executed 7 on 7 and a play action period that showcased the team’s big play potential.  Next week we are looking forward to our first live action with officials as we compete during our redzone and goal line opportunities.  “WE ARE… DA!!!”

Boys Varsity Soccer:
Boys Varsity Soccer had a fun week of practice. A few heavy rain storms made for some enjoyable play battling the elements. We continue to get better as a group. Our thinking is quicker, touches more controlled, and we’re passing with intentional pace and purpose. Also, we had our first chance to play together on a full field and are looking forward to our first Green and White scrimmage on Wednesday. 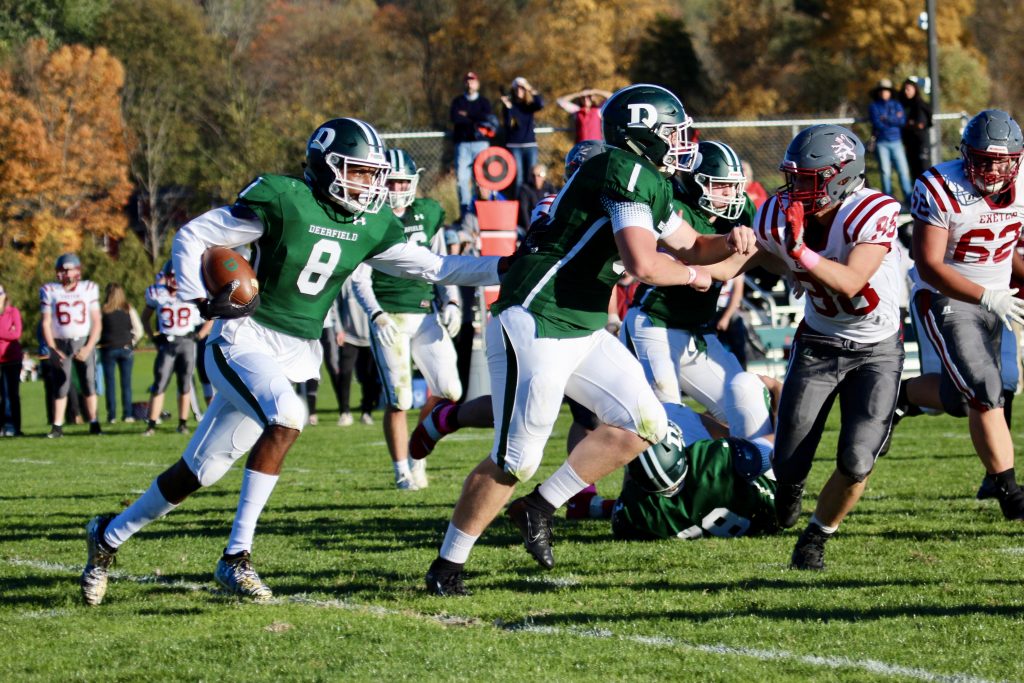