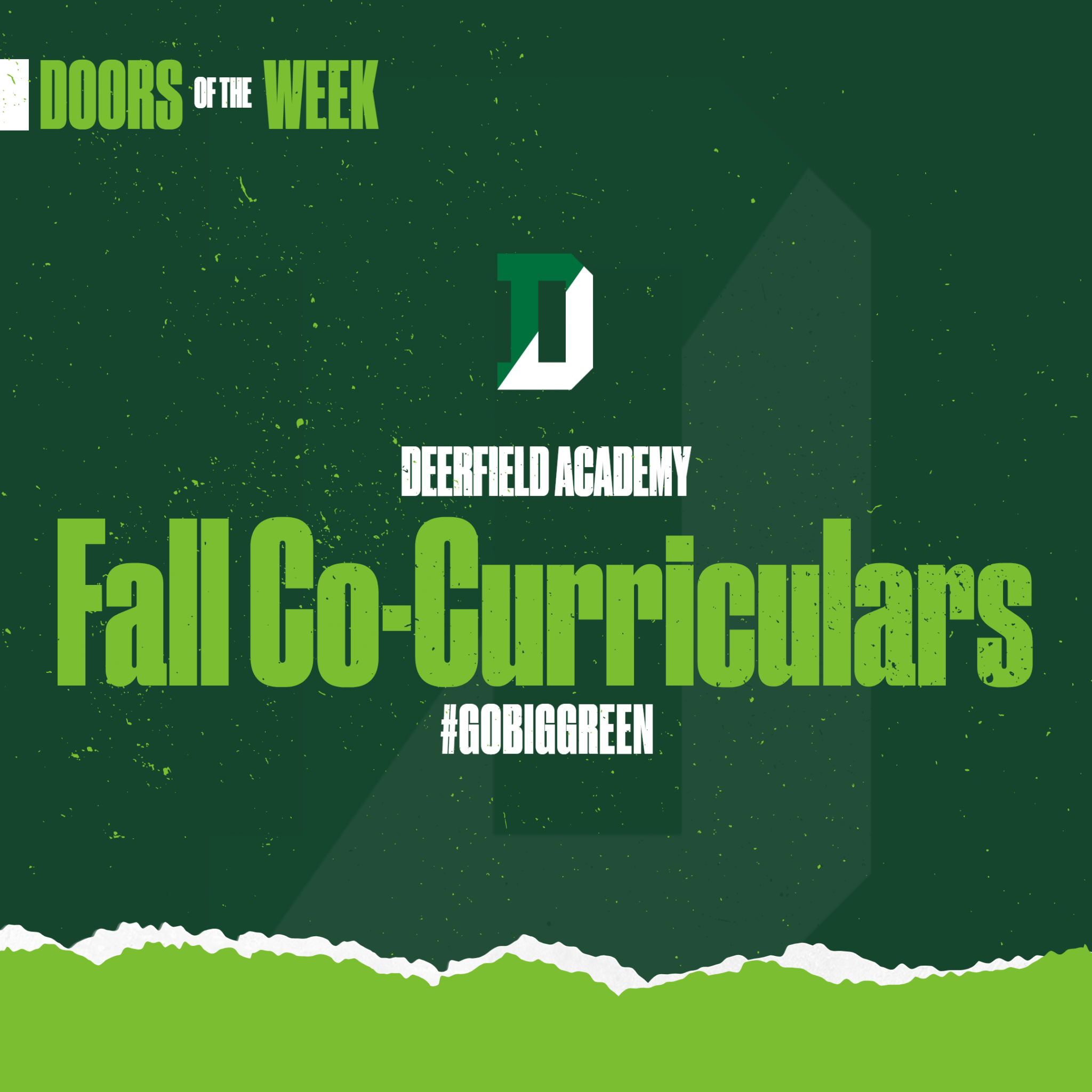 Congratulations to this week’s Doors of the Week! Learn more about their contributions to their teams and co-curriculars below.

Varsity Field Hockey: Hannah Roche ’21
Hannah Roche brings intensity, focus, and fun to the field as a senior this year on the Varsity Field Hockey team.  On the field, her determination, effective defense, and quick passes generate offensive momentum from the back of the field.  Hannah looks  to support her teammates at any opportunity, providing passing options and using her experience to help guide newer players.  She brightens the spirits of the team even on the rainiest of days with her humor and laughter.  We look forward to seeing her competitive play bring energy to the field in our first Green and White scrimmages this week!​

Boys JV Soccer: Tommy Spater ’23
Tommy has been the arrive-first, leave-last kind of athlete since week one. As one of our three goalies, Tommy is always willing to join in on the field to allow the other keepers time in goal. Whenever he is between the sticks, however, he gives 200% effort by communicating with his defense, bouncing back with a positive attitude if scored on, and making bold saves– even when shots come from near-range! During our Friday Fitness session this week, Tommy was also an exemplary teammate, helping to organize running strategy and cheering on his teammates all the way through to the finish line.

Girls Cross-Country: Noelle Abeyta ’21
Noelle Abeyta is the Door of the Week for the girls XC team. Along with our other team captain, Grace, Noelle has exemplified great leadership and team spirit throughout the season. She was a motivating force during the summer training program, always ready to talk about her runs when the team met on Zoom, and she continues to encourage each and every runner on the team. This was particularly evident during the 3k green vs. white race this week, where despite the miserable weather, Noelle returned after her cool down run to cheer on the second group of runners. This team spirit and thoughtfulness makes her our door of the week!

Boys Cross-Country: Quinn Hampson ’22
The boys cross-country Door of the Week nomination goes to Quinn Hampson ’22 for, in winning the weekend’s race with a solid personal best, realizing the product of relentless persistence in his training over the spring and summer. It should also be said that Quinn is a consummate community member; DAXC coach emeritus Mr. Schloat spotted Quinn stop his car during one of the rain storms to clear a fallen limb from Old Main Street.

Football: Dylan Camp ’24
This week the football team capped a busy week with a highly contested and competitive 2 hand touch football tournament that featured four evenly matched teams.  The energy and excitement were palpable throughout the event where some of our linemen led the way with big catches.  One of our newcomers stood out as he returned to the field with the team on Saturday.  Dylan Camp ’24 made big plays from the opening kickoff that led to his team’s narrow championship victory.  Camp hauled in 2 touchdown passes and converted 2 two point plays to pace his team.  We are excited to see him get back to work on the field this week and might need to get a “fumblerooski” in the playbook in the future.  Great job Dylan!

Boys Varsity Soccer: Connor Olson ’22 & Tait Kline ’22
Connor Olson: Connor has continued to improve through his hard work and dedication to training every day at 100%. He has quietly and steadily become one of our leaders and sets a great example for the rest of the team each and every day.
Tait Kline: Cannot say enough about Tait’s dedication to our team. Unfortunately, he is not able to compete this fall, but his impact on our group is undeniable. As our manager, he keeps us on track, assists with every facet of practice and has become a de facto assistant coach. We wouldn’t be the group we are without Tait’s positive influence every day. His nomination is VERY well-deserved!

Water Polo: Sydney Bluestein ’21 & Ginger Berry ’21
Seniors Sydney Bluestein and Ginger Berry have been developing their skills as polo players this fall even as they have pursued excellence on the diving board and in the swimming lane, respectively.  Willing to play different roles in practice to help their teammates improve, the girls have led by example and have lifted everyone’s spirits with their good cheer.

Chamber Music: Forrest Gao ’23 and Ben Wolfson ’24
Pianists Forrest Gao ’23 and Ben Wolfson ’24 are both new to campus, but have already distinguished themselves as musical superstars. They have hit the ground running this term, preparing a piece together as soloists with the Deerfield Chamber Orchestra. They have already put in over one hundred hours of collective practice time preparing the two virtuosic solo piano parts for Camille Saint-Saëns​’ “Carnival of the Animals” for a video recording that will be released as a part of the Arts Extravaganza on the weekend of November 13th. Specifically, I’d like to commend their exemplary work ethic and teamwork. They have inspired and supported each other to do their best work throughout the term as they’ve prepared their extremely difficult parts. Despite being new to campus, they’re already serving as musical role models to their peers in the Hess Center.​

Girls Varsity Soccer: Ruby Chase ’21 & Fife McCargo ’23
Since day one, Ruby has been a model of energy and focus. She works hard on offense and defense, making combinations with the midfield and looking to go to goal. Ruby has been supportive of her teammates on and off the field and we admire the determination with which she approaches everything she does. Way to go Ruby!
Fife is a skilled soccer player who brings consistency and steadiness to the game. She is focused during drills and is continuously looking to get better with each repetition. We are lucky to have her tenacity and spirit at DA and look forward to her continued growth!

Boys Jr. A Soccer: Jack Willett ’23
Jack’s genial, soft-spoken presence belies his competitiveness and fierce commitment to self-improvement. A veteran of last year’s undefeated Junior B team, Jack impressed from the first practice with his advanced touch and dribbling skills and his never-quit attitude. That all came together to make him the standout player in our first Green v. White contest on Wednesday, in which he played forward, scoring the game’s first goal and then, in the game’s final minute, the go-ahead goal, sealing the victory for White. The highlights will keep coming for Jack, but even better than his stats is the way he always puts team first.

Boys Jr. B Soccer: Heskey Samu ’24
This week, Heskey Samu is the boys Jr. B soccer Door of the Week nominee. He scored the 1st two goals for the White side in their opening Green & White scrimmage in their 4-2 win over the Green, both unassisted and one coming from long range. Heskey is the captain of the White team and has been one of the best players on the field through the first several scrimmages. 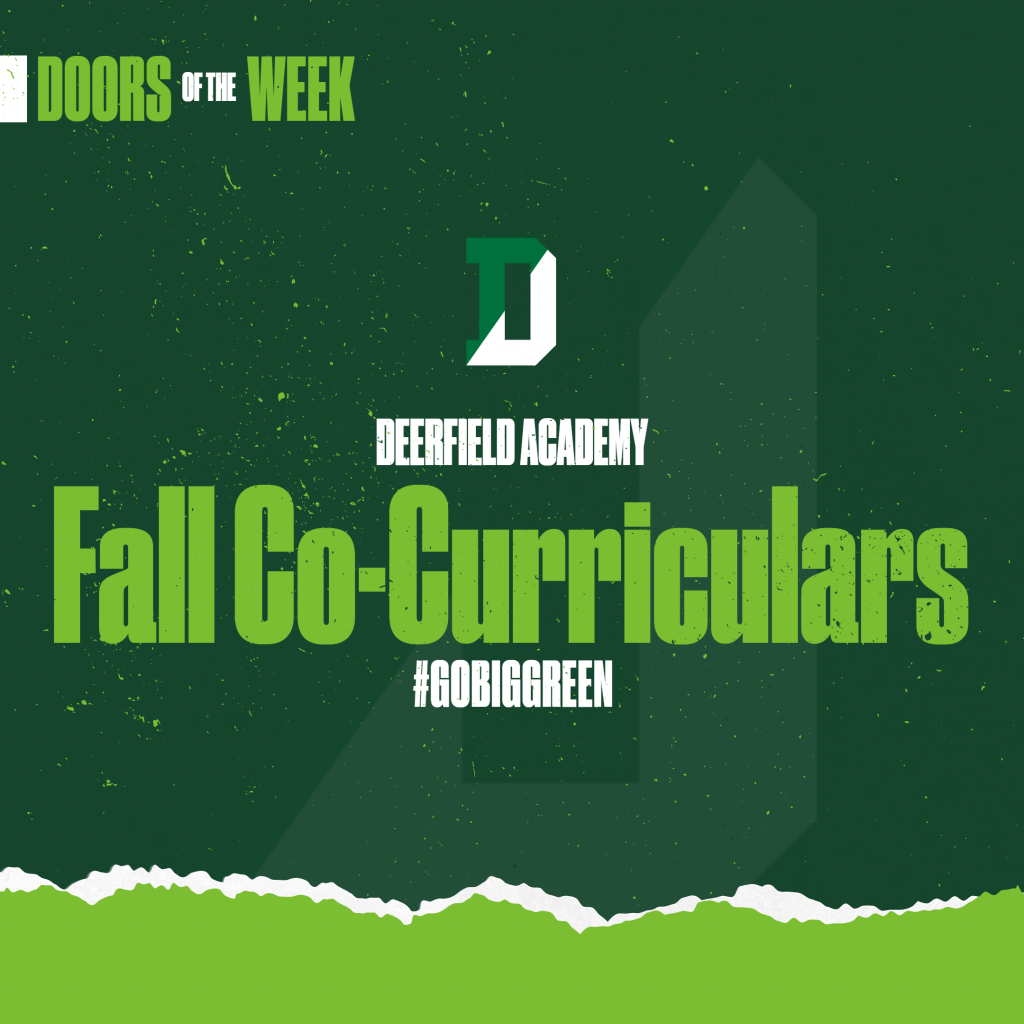