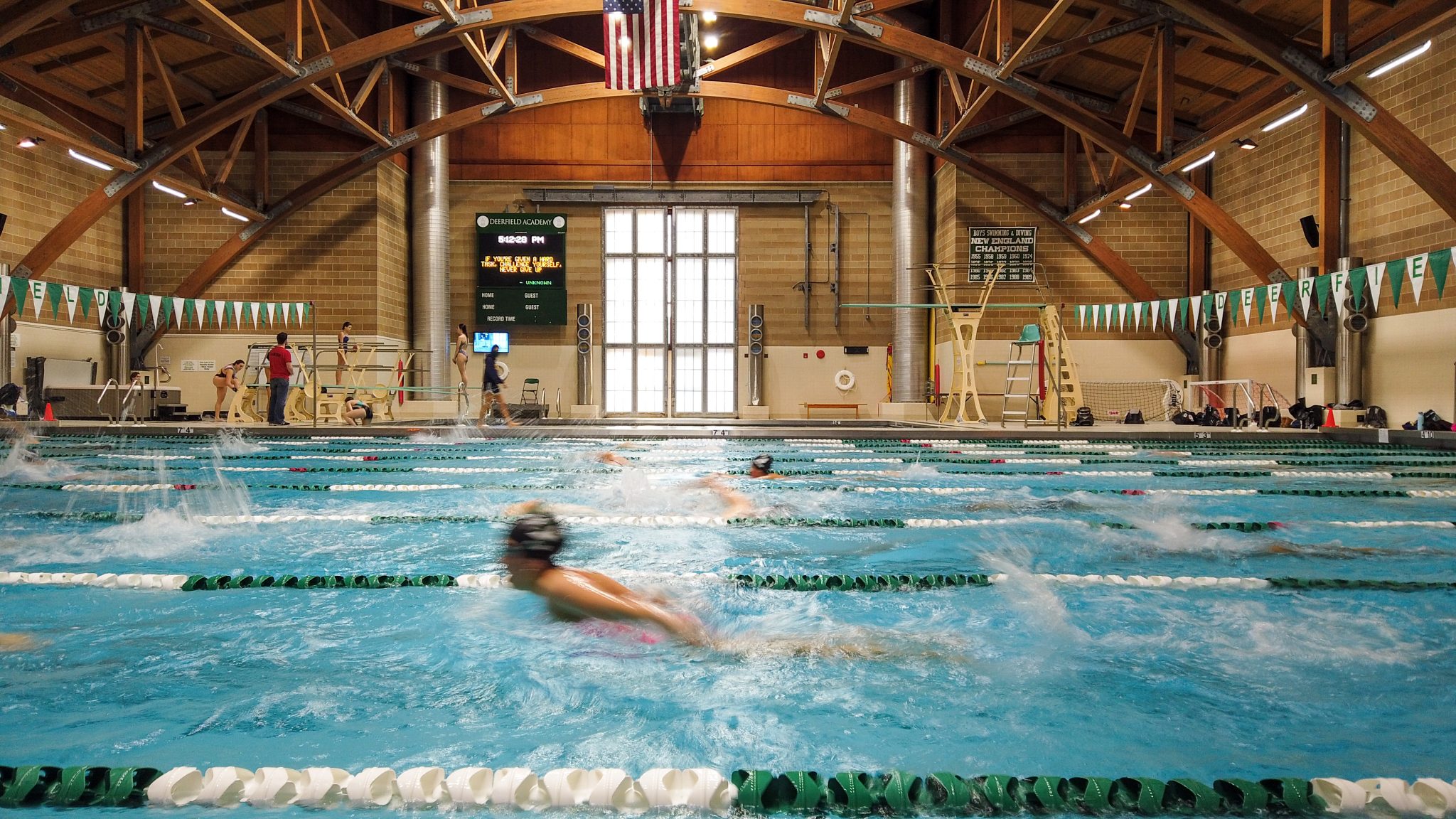 This week, several Deerfield teams returned to action against outside competition and a number of teams held competitive “Green and White” scrimmages. This week also included team picture day for our winter teams. Several photos are posted to Vidigami already and more will be posted later this week. Students and coaches are pouring lots of hard work into their sports!

Girls Varsity Hockey:
In the first game of the abbreviated 2021 season, Deerfield Girls Hockey traveled to NMH to take on the Hoggers. We dominated possession and pace from the get go, and went up 2-0 after the first period thanks to two goals from Jackson Kinsler ‘22 (the first was assisted by Sam Olander ‘23). NMH got a goal back in the second, but Annie Dinges ‘24 got the first goal of her DA career short handed in the third to put the game away. Both NMH goalies were excellent, and Emma Tennant ‘21 made a few key saves for the Big Green. Ellia Chiang ‘21 earned the hard hat for her tenacious play all over the ice; as she has done for the past four years, Ellia set the tone for our team with her intensity and unmatched work ethic.
We were so grateful for the opportunity to compete today, and want to thank NMH for their hospitality. We are also indebted to Mr. Howe, Dr. Austin, Dr. Benson, all the trainers and our bus drivers for going the extra mile to make this opportunity possible. While we wish family and friends could have been in attendance, we felt their support from afar. It was a fun and joy-filled afternoon of hockey, and we can’t wait to do it again next weekend against Berkshire.

JV Swimming:
Swimmers honed their skills with a week of daily intensives, spending one day focusing on each stroke. Strokes were broken down into their singular components and then reassembled, providing athletes with insight into their own strengths and weaknesses.  A series of videos accompanied the intensives and allowed the swimmers to choose drills that focused on their own goals. They met each challenge head on, and pushed through each practice. We’re really proud of the effort they put in and the progress they made this week!

Boys JV Basketball:
The last week of February! It’s hard to believe that we are having to wrap up the season in the next week and a half. The coming week will be our last full week of practice. We’ve improved so much over the past few weeks and it just feels like this team is building some great momentum. Individually, we focused on offense and defense within the pick and roll and worked on some different scoring moves. As a team we continue to try to develop rhythm and consistency within our offense and transition. We are also trying to improve how we help our teammates on defense. The week culminated with the first of our scrimmages with the team split into two squads. The game was tight for the entire scrimmage and went down to the final seconds before it was decided by a beautiful drive by Kiernan Keller ’22. Both teams put forth great effort and an admirable mix of competitive edge and sportsmanship. It’s difficult to recognize the standout individuals because so many people contributed significantly. It really felt like both teams were playing well no matter who was out on the court. Tyler Simon ’22, Jeff Wang ’23, Moises Castillo ’23 and Ford Holmén ’22 are gaining comfort and confidence and will be players to look out for in this coming week. We’re looking for continued quality play and improvement from all of our first year ninth graders – Henry Griffin, Max Peh, Eddy Rena and Barack Mwesigwa – all of them have been impressive so far this year. And most certainly, we anticipate the continued leadership and positive example from our returners, particularly from Seniors Tommy Leimkuhler and Sultan Sawal who along with our other returning players have been the driving positive force to our season.

Girls JV Squash:
The Girls JV Squash team had another strong week.  While this week saw the departure of Caroline Hoff ’22, it also involved a couple moments of celebration for our team captains.  On Wednesday, before the team picture took place, we sang “Happy Birthday” to Isha Rao ’22, and on Thursday, the team came together to celebrate the final squash practice for Grace Russell ’21.  The team prepared a poster and balloons for Grace, who subsequently led the team through a couple of squash games.  While we are sad to lose Grace, we look forward to having another strong week next week, one that involves JV-Thirds matches.

Boys JV Hockey:
For the last week of February this team kept their spirits high and energy levels at a pretty good level. The Monday and Tuesday practices were spent in smaller cohorts working on 1v1 and 2v1 skills. The practice tempo was high on Tuesday night. It was a bumpy week outdoors with all three practices scheduled for the outdoor rink being scrapped due to snow or warming temps. Team pictures on Wednesday got the team in their Deerfield home jerseys for the first time all season. This week we hope to get 5 good days of skating in. This has been a good group. They love the game of hockey and it shows no matter what!

Boys Varsity Hockey:
The BV hockey team played their first game of the season against NMH on Saturday. After giving up two goals in the second period, the boys battled back in the third, netting two power play goals in the final five minutes to escape with a tie. Sophomore Owen Clifford and senior Sam Mackenzie were the goal scorers for the Big Green. Next up for Deerfield is a home-and-home series with western Massachusetts rival Berkshire.

Boys Thirds Basketball:
This past week, we played Green and White scrimmages, with the Green team taking 3 out of 4 games. We plan to keep scrimmaging for however much longer we have practice and will continue to keep a running tally of the results. Hopefully the White team will narrow the gap this week, with several games planned throughout the week.

Girls Thirds Basketball:
Thirds girls basketball primarily focused on ball skills this week, perfecting trick shots (or trying to!), dribbling up and down the court, and working on fakes and other tactics to outwit the opponent. We continued to play shooting games at the start of the week, and then our weekly Tuesday circuits made certain we were getting plenty of cardio in on the courts. We also enjoyed getting team photos taken later on in the week, which we followed with a team pizza dinner. The thirds girls basketball team strongly recommends Hillside Pizza!

Girls Thirds Squash:
We had an action-packed week shortened by an extra-surprising Head of School Day. After our ladder remaining pretty static for most of the season, we saw some movement this week in our two challenge nights. On Tuesday ninth-grader Linnea Dreslin snagged the #2 spot and after impressing all season in practice. Tessa Bracken climbed to #6 on Tuesday as well. Two nights later, Everett Mokarow was the next to move up a rung. And by holding off a strong challenge from Linnea, Stella cemented her hold on the top spot, going wire to wire as our #1 this year. Now we look forward to our final challenge match of the season on Tuesday night, which will set our rosters for our Green/White season-ending match with the JV squad on Thursday.

Girls Varsity Basketball:
This week we had our first game of the season!  We played Wilbraham and Monson Academy at home on Friday night.  The game was close the entire way.  We went into halftime down by only one point, and we ended the game losing by just two points.  The team played hard and senior captain Angie Czeremcha led the team in scoring.  Meghan Holland hit a spectacular three-pointer with just seconds left in the game to give a jolt of energy for the final play!  We are looking forward to back to back games this weekend against Berkshire.

Girls Varsity Swimming & Diving:
Last week we had an awesome Green vs. White meet and we are looking forward to our virtual swim meet against Suffield tomorrow! 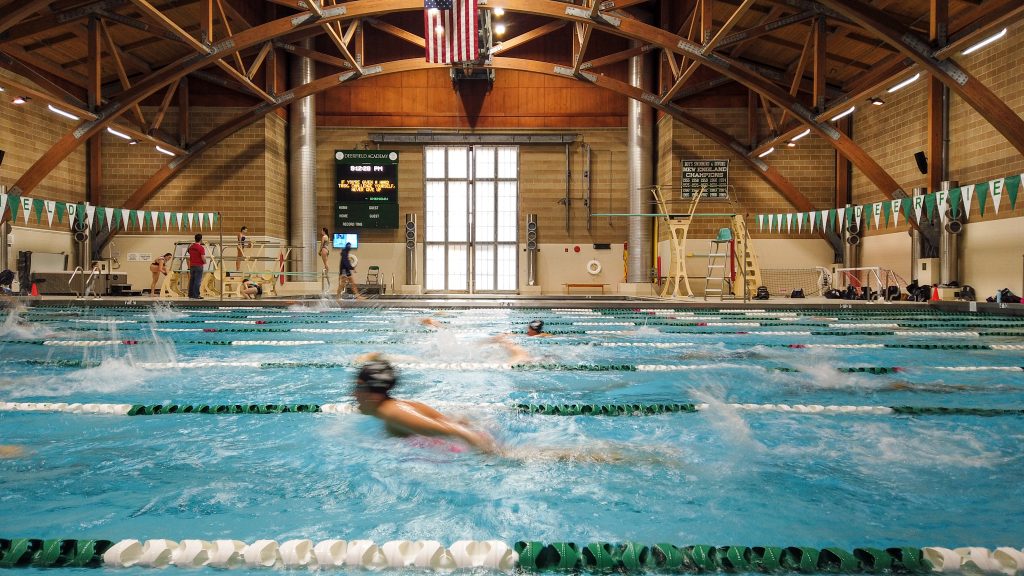