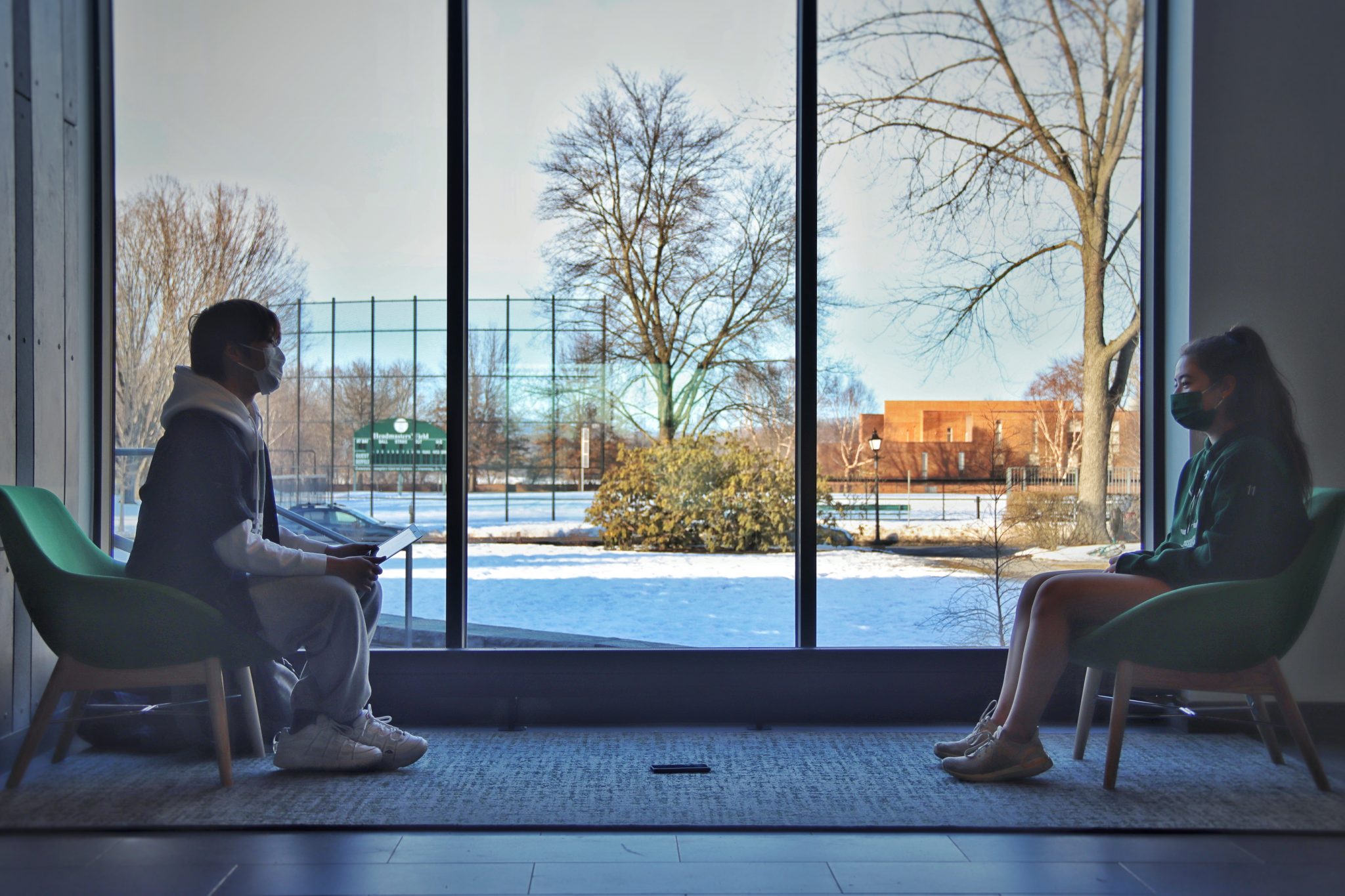 GG: What’s your story with sports?
KC: I started skating when I was about three or four. I got thrown on the ice because of my brothers, and then I really liked it. So, I got put in the boys’ team and skated with the boys when I was about nine or ten, and then I switched over to a girls’ program to play girls hockey. For club, I play for the Boston Junior Eagles. For high school, I went to the Winchendon School for Freshman and Sophomore year, and then I came to Deerfield for Junior and Senior year.
EC: Growing up, my dad played a lot of sports, and he really wanted my brother and me to get into sports. So, when I grew up, I played a lot of sports: hockey, soccer, golf, baseball, snowboarding, and all these different sports. I really like hockey and soccer, so I went with these two sports. I kept playing every day, and the more I played the more I loved them. I enjoyed going to practice every day, or just working on shooting or stick-handling. My love for sports grew so much because I started at such a young age.
LI: Both my sister and I played sports growing up. We’re from Canada, so hockey came naturally to us. Because our dad played hockey, we were both on the ice at a young age, and we loved it.

GG: How long have you played hockey, and what has inspired you to start playing hockey?
KC: I’ve been playing since I was four, and I started playing in clubs when I was six. My brothers were a big part of it, as well as my dad: my dad grew up playing, and he threw my brothers into hockey. It was really cool seeing my brothers growing up and playing together. They helped me out a lot as well, and they are like role-models for me.
EC: My dad was a big inspiration when I was starting. I started skating when I was three, and I played hockey when I was four. My mom actually taught me how to skate: she would take me to a public skating rink, and she would have chocolates in front of me to have me skate across the ice. This is how I started skating. Then, my dad enrolled both my brother and me in hockey. At a young age, I always played with my brother. I am a really competitive person, and so is he, so we built that competitiveness off each other, and we kept on playing like this.
LI: I actually started figure-skating first, and my sister started playing hockey before me. Then, I saw one of her games, and I thought it was really cool, so I wanted to try playing hockey, too. That’s how it got started, and we have been playing together ever since.

GG: How do you balance your time with school work and hockey?
KC: It has obviously changed for me since I have come to Deerfield since it is more academically challenging. I think it is essential to have good time management. I always get some homework done before practice and debrief a little after practice. Then, I eat dinner, and when 7:30 hits, it is full ‘school mode’. I also believe it is easier with this year’s schedule, because there is more time throughout the day, and I think that I have a good balance between school and hockey.
EC: To balance school and hockey, I think it is important to have that mindset to just “do it”. For me, I know that I have to keep my priorities straight since I know that playing and working hard in hockey will take up a lot of my time. I set aside time specifically for studying, whether it is waking up early in the morning, or doing it before or after practice. I also make sure that I have time to spend with my friends because I think it is important for me.
LI: Growing up playing sports, I always think a balance between athletics and school is important, especially at Deerfield, as both are so rigorous and excellent. I think having good friends, teachers, and coaches around myself pushes me to prioritize my time wisely. I also always make sure I don’t procrastinate and fall behind.

GG: What is the most valuable thing about hockey for you?
KC: I would say the team aspect. I really dig into the team: what the team demands, working together, and getting to know everyone on the team. I think if you are playing individually, you won’t get too much out of hockey. If you really buy into a team that you are in and get to know everybody on the team, your mentality can improve so much, and you can win important games.
EC: I learn a lot of lessons from hockey, and one of them is that we should always try to keep improving ourselves, and the significance of this stretches beyond hockey, and into our lives as well. In hockey, I believe that you can always shoot harder, get stronger and faster, and there’s no limit as to who you are as a hockey player. In life, you can always become a better person and study harder. I think the intersection of constantly wanting to learn and improve is really valuable. Also, teamwork is also a valuable part of hockey. You know that you’re not the only individual on the ice, and you are always working with and communicating with and learning from each other.
LI: The friends that I have made, including my best friends, have come from playing on the ice together. With sports comes a lot of long-lasting and deep friendships, and being on the ice with friends is one of the best things in the world for me.

GG: How is being a captain on the team, and what do you have to do differently in a season like this?
KC: This year is definitely different compared to the other years. With the co-captains, we definitely try to balance that. We always do trials and errors to figure out what works best for the team. But I think we have a good team, and the girls are really buying into what we are asking them to do, and I really hope this gets transferred into the games because we have a few on the schedule. I also think the dynamic that I have with Lisa and Ellia is good, and we are really close. We always bounce ideas for the team off each other, and we are always there for each other.
EC: I’ve always looked up to the captains that I’ve had before, and I always try to emulate what they have taught us to guide the younger players on the team. I try to be a role model for them, as were my previous captains were role models for me. Since we don’t have many games this year, which used to be a big motivation for us, we had to find other outlets of motivation: we are trying more to be more grateful for being with the team and being on the ice. We have always had team dinners, and we also have team lifts and discussions.
LI: I am lucky that I have great teammates because the captains can only do a great job if the people on the team are great as well. The seniors on the team and I all stepped up as leaders, especially this year, and we hope we can pass that down to the next generation. With COVID, we could not play a lot of games and have as much bonding time as we did. But because of this, I am able to focus a lot more on myself and my team, and I don’t feel as rushed as I do in a normal season, and I get to enjoy it more. I am also thankful for being able to play with my teammates and be healthy.

GG: As the captain, what do you think is special about your team?
KC: For this year and last year, it is the team dynamics. We have team dinners every night, and we are always texting in the group chat, and we are also open to critiques from teammates because we are all trying to make each other better. The team also does well to take the new kids under our wings to make sure that they know what they’re doing, and we always have a great time together.
EC: We have such a good team dynamic, and everyone is so close together and supportive of each other. We hold each other accountable for the things that we do. Our team motto is “FAMILY”, and each letter stands for something for us. I believe that “FAMILY” really describes us because we are such a close team, and that is really important on and off the ice.
LI: This year, we had a lot of new kids come in, and we also have a big senior class. So, I think for everyone to bond so quickly and have great team spirit and commitment is special. Everyone individually is also special. The coaches have also been great, and they have been a big part of pushing us to improve through a season that you can easily plateau or just go through the motions with. This just shows how much commitment we all have, and how much we want to play despite all the hardships that we have gone through this season.

GG: Do you have any hockey player whom you look up to or take inspiration from? Why?
KC: Some within the family: my brothers would be two big ones. I watched them play together at a public high school in my town, and it was awesome. I watched them break some records there, which was also pretty cool. Also, in the women’s hockey world, I have seen the 2018 Women’s team win, and that was very inspirational for me because I have always looked up to them.
EC: Some of the hockey players who I look up to are Hilary Knight, Kendall Coyne, and Patrick Kane. I look up to Kendall Coyne because she’s not the biggest hockey player, but she works hard and she is really fast. I think that is also my style, being fast and aggressive and all over the ice.
LI: All the seniors that have graduated from the teams are players whom I look up to. They really shaped me into the hockey player that I am this year. I also look up to my friends, the other seniors on the team. We have been so close and gone through a lot together in a season that we didn’t hope for. Despite this, they are very strong, and we have all supported each other. I also look up to my coaches and the rest of my team. It is easy to look up to everyone when everyone is doing such a great job. 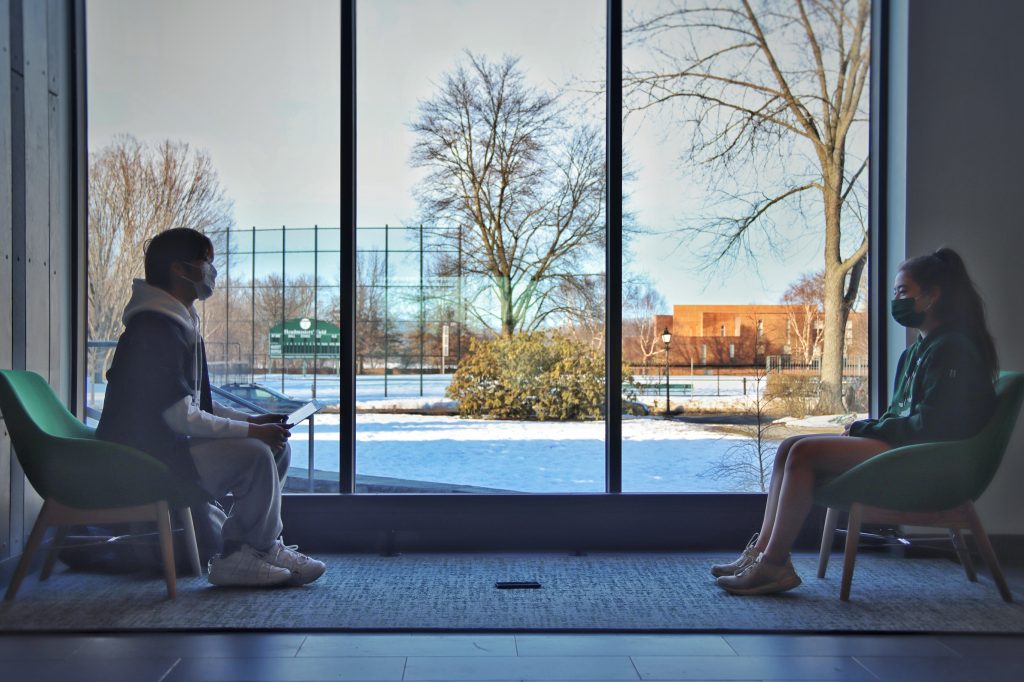