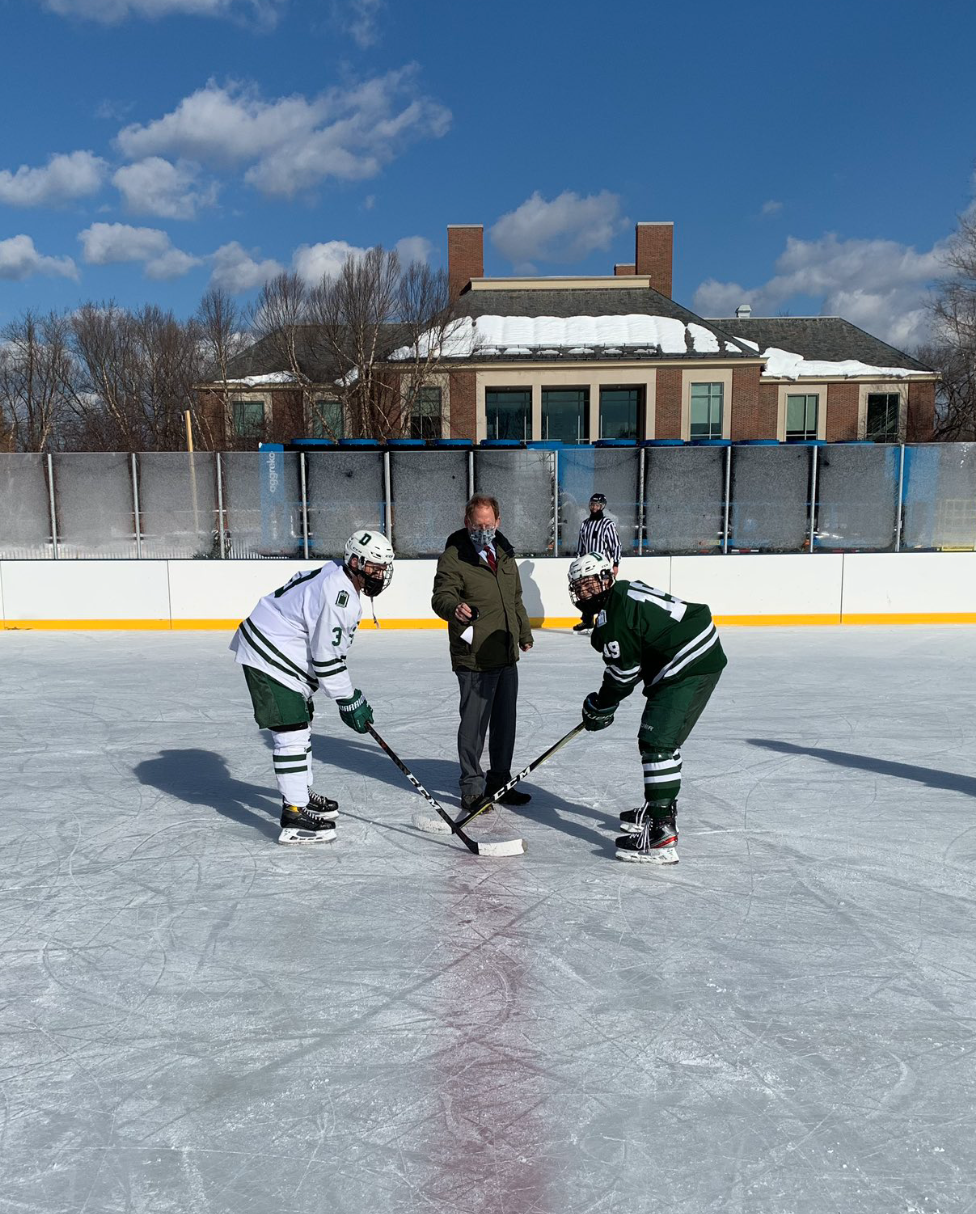 Another great of practices, which included a lot of snow and was capped off with some green and white scrimmages! Read on to learn more about each team’s week.

Boys JV hockey
Last week the JV boys hockey team saw their first three practices of the week devoted to skills and drills with the team separated into two groups. Late in the week we had the opportunity to do full-ice practicing and even got to in-house scrimmage on Thursday and Friday. The team is comprised of students from all grades, some returning players and an influx of new talent. As a group we are still getting to know one another. So far, the team has been upbeat and all have come to practice ready and willing to skate hard. We have some good talent here and wish we were playing games! However, in the current state of where things stand with Covid this group is doing well and having fun playing hockey!

Girls Varsity Basketball:
Our team highlight this week was going old-school (like Hoosiers) with chair drills, since we couldn’t have real defenders!  Earlier in the week, Claire Cummings, Harlowe Healey and Kiki Brainard were the only three able to practice, so they showed up each day and got up a lot of shots with the coaches!

Girls Varsity Hockey:
Girls Varsity Hockey had a great week of competition. After a few days of skills-based sessions, the team worked hard to master their forecheck systems, and then enjoyed a day full of small area games. The highlight of the week was our intra-squad scrimmages: first, on Friday night under the lights of the outdoor rink, Team White defeated Team Green 4-3 behind two goals from Elena Junkala and a strong performance in net from Ollie Hemphill (thanks, Ollie!). Then, on Saturday, Team Green got their revenge in a 3-2 shootout victory. Annie Dinges had both goals in regulation, CC Deslauriers got the shootout winner, and Emma Tennant was strong in goal.

Girls JV Squash:
The Girls JV Squash team had another solid week, one that included challenge matches on Friday afternoon.  The girls spent the week practicing for their matches, and they participated in a couple of strength and conditioning exercises.  On Wednesday, Grace Russell ‘21 led a fun core workout, and Olivia Waterfall ‘23 joined us on Zoom.  The challenge matches went smoothly, and nearly everyone kept their spot on the ladder; Valentina Williamson ‘23 defeated Kaitlyn Kelly ‘22 in a competitive match, allowing Valentina to move up the ladder.

Boys Varsity Swimming & Diving
The boys’ varsity swim squad competed in their first “virtual” meet of the year on Wednesday, Feb. 3rd.   Having recorded most of Deerfield’s past meets over the last eight years, Coach Spencer decided that during a COVID year with no face-to-face competitions conducting meets against some historical teams would make for good fun for the team.  Their opponent on Wednesday was Minnechaug’s 2016 squad. The Deerfield boys led from start to finish with a winning final score of 88-82.  Contributions were made across the board from both veteran and rookie swimmers.  Junior Mark Cai achieved a personal best time in the 50 Freestyle going 22.69 seconds to take first place in that event.  Senior co-captain John O’Loughlin had his fastest in-season 100 freestyle time ever, clocking in with 51.66 seconds to win the event.  First-year swimmer Tyler Ettelson brazenly conquered the 500 freestyle and the team received strong contributions from fellow rookies, Ashish Sharma and Levi Tipton.  All in all, this was an excellent first meet and a great chance for everyone to compete and measure their progress for the season.  Our next “virtual” meet will be against the Hotchkiss 2017 team on Wednesday, February 17th at Koch Pool at 6 PM (Socially distanced fans in the stands are both invited and encouraged!)

Boys JV Basketball:
This past week saw half of our team getting in their first scrimmages of the season while the other half was out of commission for most of the week, able to participate only on a limited basis for Thursday and Friday. Even given those limitations, the full team was able to prepare in earnest for increased scrimmage time as we get into the heart of the season. We focused on learning our base offense while also beginning our work on defensive positioning as we continue to develop individual skills and team concepts as we go. All that said, the energy in the gym increased significantly with the first scrimmages. It was exciting to see some of the returning players shaking off the rust but arguably it was our newer players who stole the show. Ninth graders Barack Mwesigwa, Eddy Rena, Henry Griffen and Max Peh all put their stamp on the games and were significant contributors to their team’s success. Not to be outdone, first year JV tenth graders Muyi Woghiren and Zhexuan Li also showed great hustle and court sense. We are very excited to build on these early scrimmages and see how this team grows and develops over the coming weeks.

Boys Thirds Basketball:
The boys thirds has been devoting the beginning of the week to drills and non-contact games, like Bank, layup contests and Knockout. Towards the end of the week, we’ve been playing brief scrimmages and hope to play longer games as the health situation warrants.

Girls Thirds Squash:
Things started to feel more like a typical season this week, with cohorts running through service and rally drills and conditioned games early in the week before our first Challenge Night on Thursday evening. Number 1 seed Stella Fierro held off a tough challenge from first-year Isa Cushman, with the rest of the team crowded (at a distance!) around the court oohing and aahing after each point. The team enjoyed the friendly competition so much that we’ve decided to hold two Challenge Nights per week, so look out for lots of movement on the ladder ahead!

JV Swimming:
JV Swimming put in a full week of practices, focusing on advancing stroke techniques and improving turns.  The team completed some especially challenging sets, a long pyramid that had them swimming a half mile straight, and a tough set of 50’s on very short rest.   As the team improves their fitness, they become ever more prepared for the first green/white meet next week.  Time trials this week will illustrate improvement and help us prepare for next week’s races.

Boys Varsity Hockey:
The boys hockey team had another productive week, culminating with a shootout thriller during our Green and White scrimmage on the Outdoor Rink on Saturday. Special shout-out to the strength and conditioning coaches who have run terrific off-ice sessions for us the past few weeks. The kids are getting bigger, stronger, faster every week!

Girls Thirds Basketball:
The thirds girls basketball team made the most of being able to start playing some games this week, much to everyone’s enjoyment! After a few days practicing ball skills and working on strength and conditioning at the start of the week, by the end of the week the team was able to satisfy their competitive spirit by engaging in some 3-on-3. We also undertook the important task of updating this year’s team playlist, making sure that we have songs to motivate and inspire as we take on the second half of the season. Don’t worry, the High School Musical songs stayed on the playlist. 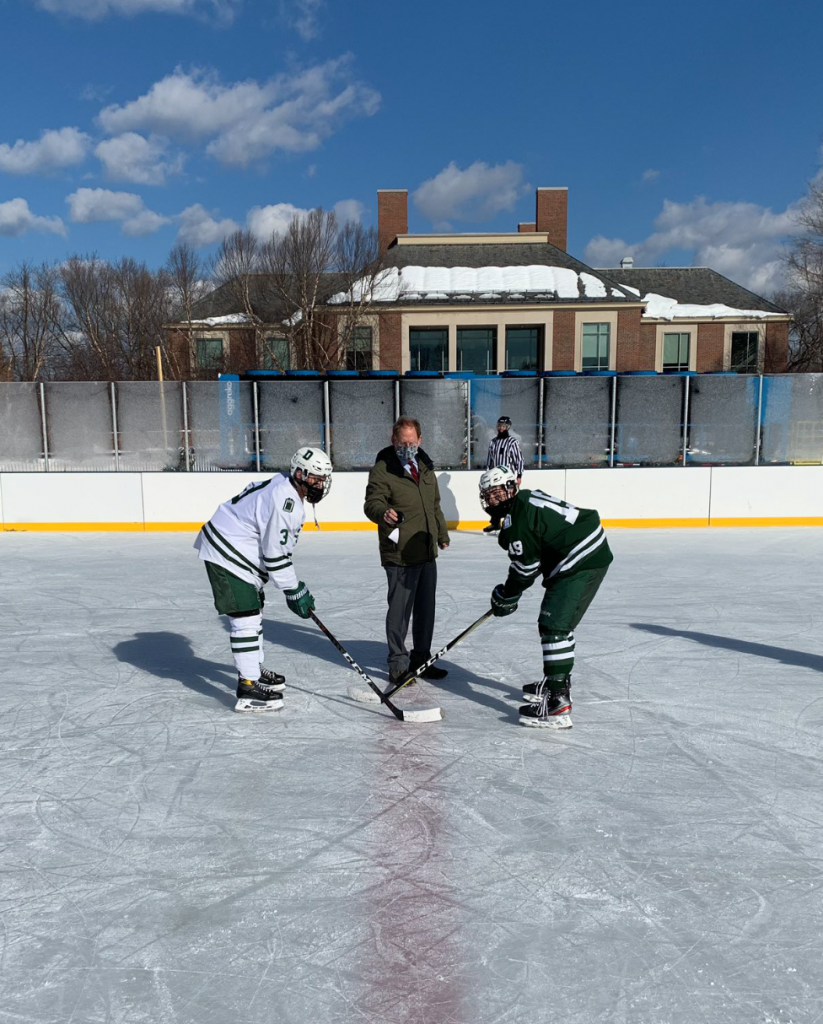