Captain Lucy Blake is named Athlete of the Week in JV Swimming.  Her positive attitude and consistent performance in practice has paid off with strong personal best swims in the first two meets of the season.  Most notable was a 15 second drop in the 500 Free on Saturday against Northfield Mount Herman.  Lucy’s leadership both in and out of the pool has made her a significant contributor to the team.

Cam Howe is named Athlete of the Week in JV Swimming.  Her consistent hard work in practice and eager embrace of the most challenging events makes this newcomer an emerging leader.  Cam makes every effort to execute what is asked of her and her willingness to try new strategies makes her a swimmer to watch in the coming weeks.  We are just beginning to tap Cam’s potential, and she will add much to the culture of this team.

Jaxon Palmer is named Athlete of the Week in JV Swimming.  New to Deerfield and relatively new to swimming, Jaxon is already making her presence felt.  A leader in practice, she quickly learns new skills and seeks to apply them directly and repeatedly as she develops in the sport.  She swam best times repeatedly in the first meet of the season and is quickly becoming a contributor in sprint freestyle and backstroke.

The girls JV hockey AOTW is Regan Hoar ‘20. Regan is a joy to have on the team. She always comes to practice with a smile on her face and works hard to improve. Regan has become much more confident in her skating and shooting ability this season and it has paid off for us in games. She scored the winning goal against Loomis last Wednesday and her line scored 2 of the 4 goals overall. We are so proud of her for her improvement and look forward to her continued strong play for the remainder of the season! 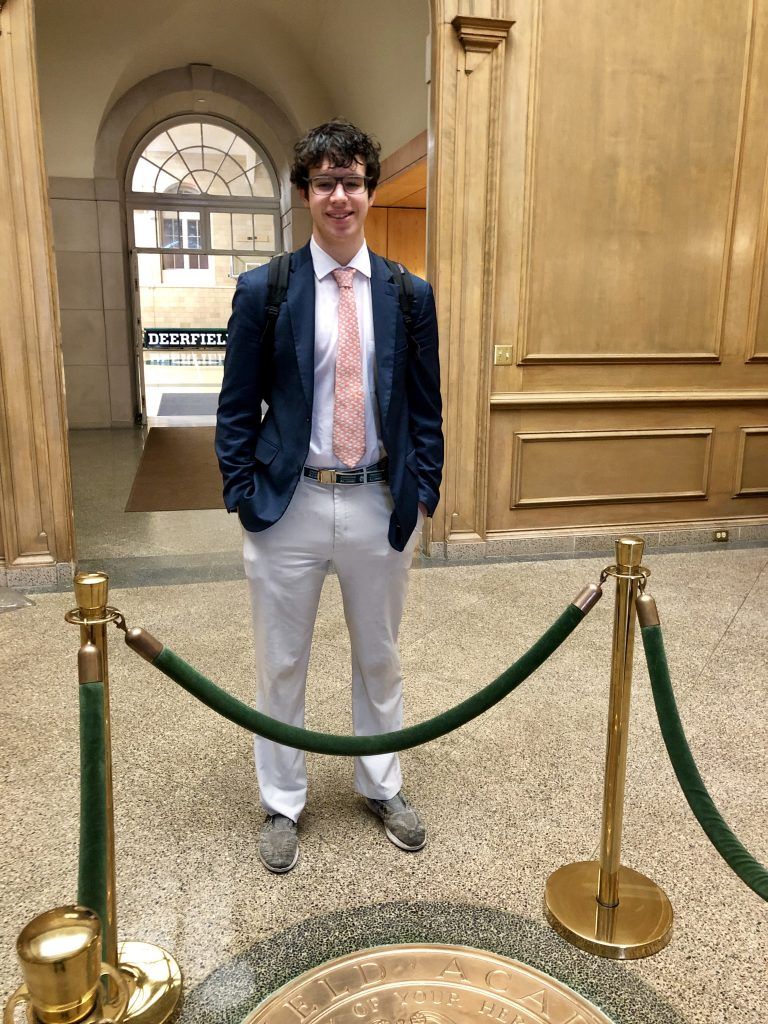 In our commitment to developing strong role players, we are pleased to recognize Four Doors who’ve made consistent and noteworthy contributions to Deerfield basketball over the course of the year, and this week in particular. Sultan Lawal has been effective and efficient on the court. With his combination of strength and savvy, Sultan has been a strong rebounder and defensive force. He has also shown touch from beyond the arc, and his speed has been an asset for his team. Michael Fadugbagbe has logged a number of quality minutes in competitive play. Michael’s speed and power make him a dynamic player who has been effective both in the backcourt and in the post. Herman Bikoko has emerged as a defensive specialist and scoring option. At key moments in games, Herman can force a turnover, push the ball in transition, make a defensive stop, and contribute to the scoring column. Tyler Simon has emerged as a sound defender and a legitimate scoring option from the perimeter. Tyler is evolving into a reliable shooting guard who can knock down the three ball. In all, the firm of Lawal, Fadugbagbe, Bikoko, and Simon have provided our team with the flexibility, mental fortitude, and deep rotation required to compete for a full thirty-two minutes of quality basketball.

Caio wears a smile at the start (and end!) of every practice. He’s always ready to train, and he trains hard. Despite some setbacks in competition—Caio is relatively new to the sport, and his weight class is very competitive—he’s always having fun and competing with great intensity. Against St. Paul’s last weekend, Caio split his lip in the first period. But he still smiled, cleaned himself up, and got right back on the matt. He’s committed to improving his technique and conditioning at all times; he’s a dedicated training partner who never lets practice lag; and he’s an eminently coachable athlete who has earned his coaches’ and teammates’ respect and admiration. Caio is a wonderful addition to the DA wrestling program!

The Girls’ Varsity Basketball Athlete of the Week is senior captain, Emma Reavis. Emma approaches every single play, whether in practice or in games, with focus and intensity. She is a true competitor and has been one of the leaders of our team since the start of the season. Over the past week, Emma led our team to two big victories and posted some impressive stats in the process. She nearly averaged a triple-double, contributing 13 points, 9.5 rebounds and 8 assists per game last week. We are looking forward to Emma’s continued leadership for the remainder of the season!

The athlete of the week for girls swimming and diving is Darcy del Real.  Darcy has worked hard all season and has seen some big rewards, especially in her 100 fly.  She is one of our most committed athletes and she pushes herself to the limit at every practice, looking for ways she can improve and making intervals that truly challenge her.  Darcy is a great teammate, and those around her find strength in her words of encouragement.  It has been a delight having Darcy join us this year and we know Darcy will do big things for DAGVSD this year and in years to come!

Alex is the hardest worker on this year’s team. He is always the first to practice and the last one to leave the ice, often when the Zamboni is on getting the ice ready for the next team. In games, he is one of the team’s most consistent performer. His coaches rely on his defensive skills, his discipline, and his good sense of team play to balance our strong defensive group. Alex loves the game of hockey and he works very hard every day for himself and for his team. He’s the type of player that could receive this recognition every week.

Emily Henderson’s selfless contributions to the team make her the Athlete of the Week for Girls Varsity Squash.  No matter where she is on the ladder, Emily works hard to improve her game and to support her teammates.  This past week, she did an excellent job of teaching a JV player, who had to step up to play in the varsity match, how to retrieve balls off the back wall.  Emily also stepped up herself, playing #2 in the match against Westminster and coming away with a well-earned win for the team.

When we need a basket, Ella delivers.  When we need a defender to shut down a hot scorer on the other team, Ella is our woman.  When we need to take back possession of the ball, Ella comes through with a steal or a rebound.  When we are exhausted and frustrated in a huddle, Ella peps us up with her boundless energy and optimism.  For being an all-around excellent player and teammate, Ella Mbanefo ‘22 is Girls’ Thirds Basketball’s Athlete of the Week.

For his impressive relay swims against Choate and his consistent improvement in individual events this season, Shaun Kronenwetter is athlete of the week for Boys’ Varsity Swimming & Diving. As a senior captain, Shaun leads the team in thrilling finishes. At Saturday’s meet against Choate, he touched out their strongest swimmer by 0.12 seconds in the 200 Medley Relay. Then, during the final leg of the final 400 Free Relay, Shaun gained almost half a second on the same rival, nearly catching him with his final stroke and splitting a remarkable 52.89 in a meter pool. These are only a couple examples of his awesome anchor legs. Throughout the season, Shaun has been a reliable competitor, always ready to perform when the team needs him. He has steadily improved his best times in the sprint free events this season while also stepping into different events, like the 100 Breast, and performing admirably. We are grateful for Shaun’s dedication to the team and we look forward to the rest of his senior season.

Cam Taylor is the JV Basketball athlete of the week. He scored 16 points against Cushing and led the team on defense. His leadership skills have been critical to our success and progress this year.

This week we recognize Samara Cummings (’20) as our AOTW. She is a consistent leader on and off the court for us this season. She is always a coachable, hard-working player and supportive teammate. She has been a force in the paint every game. Her strong rebounding, athleticism on offensive, and tenacity on defense are just a few reasons why we have been so successful this season. Keep up the good work Samara!

Christina has been a key player for us this season, and lately her strong three zone play has found a rhythm. In all three games last week, she was a force in the offensive and defensive zones, making amazing backchecks and then leading the offensive charge. Her hard work paid off culminating in a goal against Taft. Christina plays with heart and passion- and even a smile! Her effort and intensity earned her the athlete of the week for GV hockey.

Francis Dooley is our athlete of the week for boys’ basketball. Francis has emerged as a valuable sixth man for our squad, using his athleticism to finish around the rim and play strong defense.