Congratulations to this week’s Athletes of the Week! A great way to start 2019!

Merritt is the boys varsity squash Athlete of the Week. In his first match of 2019, Merritt earned a 3-1 coming from behind win over his Belmont Hill opponent. After falling in the first game, Merritt valiantly rallied to earn three straight wins ((6),8,4,11) for the victory.

Kailey has improved immensely over the course of the season thus far, and had her best game of the season (so far!) in Sunday’s game against Lawrenceville. She was active on the blueline, getting several shots to the net, and played tough in our defensive end, stopping many key chances that Lawrenceville had against us. Because of her strong consistent play this weekend and her improvements over the season so far, Kailey earned AOTW.

Jeff led the JV basketball team to a dramatic come-from-behind win over Williston Northampton in our first game back from winter break. He scored 10 points and led the team’s defensive effort on a day where the entire team seemed sluggish. Jeff’s senior leadership is much appreciated.

Girls Thirds Basketball’s Athlete of the Week is Elena Lu.  Elena’s calm yet tenacious leadership has contributed immeasurably to our 3-1 record.  As our point guard, she coordinates our efforts on the court during games and leads our team in scoring while simultaneously ensuring that all players on the court are included in play.  More importantly, though, her leadership is apparent during practices when she patiently shares her understanding of the game with some of our less experienced players, all the while helping to create an environment of positivity, fun and encouragement.

The Girls’ Varsity Basketball Athlete of the Week is senior forward Melissa Mitrovic. In our recent matchup against defending New England champions, Worcester Academy, Melissa drew the assignment of defending their 6’4” center, Aliyah Boston, who is committed to play at the University of South Carolina next year. Melissa battled in the paint the entire game, playing physically against Boston and forcing her to take difficult shots. She held the 2018 Massachusetts Gatorade Player of the Year to just 12 points, which is well below her season average. We look forward to Melissa continuing to make and impact for us on both ends of the court!

Hannah Roche ’21 is the girls JV hockey player of the week. Hannah had a great game against Cushing this past Saturday, as she tallied 3 goals in our decisive 11-5 win. She embodies the fun spirit of the team and makes the most of her time on the ice. We look forward to her continued leadership on the forward line for the remainder of the season!

This week’s athlete of the week for girls varsity swimming and diving is Caroline Mahony.  Caroline shows up to practice each and every day with a positive attitude and she puts her all into every set.  When her lane starts to fall off an interval, she is the one who keeps her teammates on track and inspires them to dig deep and make the time.  Throughout our week long training trip in Florida, Caroline swam every lap without one complaint.  She has a tremendous work ethic and we are thrilled to have her as part of our team this year!

Alexia Baker is this week’s Athlete of the Week! Alexia’s experience and leadership has been a key part of our success this season. As a captain, she leads by example. She gives her all every time she steps on the court, applying “in your face” pressure on defense and pushing the pace on offense. If she’s on the sideline, she’s constantly encouraging her teammates and giving them positive feedback. This helps us get better as team! Keep up the good work Alexia!

Matt played his best game of the season against a strong Salisbury opponent. Skating every other shift Matt looked to be in late season shape and did all the little things necessary to hold off a strong attack all afternoon long. He has been working hard to be a more consistent performer and his work is paying off!

Since returning from a minor injury, Charlie has set the bar for intensity, team spirit, and determination. Charlie wrestled his first matches for Deerfield at the Pomfret Quad, where he impressed his team and coaches with his inspirational, memorable enthusiasm. Even after a loss, Charlie said, “that was a great match!” Every day, we can count on 100% from Charlie. He’s a wonderful athlete and a great teammate. 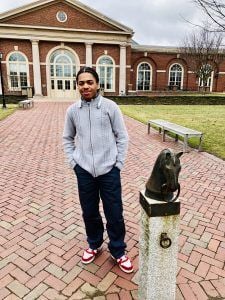 Grey and Tysean both bring great attitudes and maximum effort to each game and practice, whether it’s a drill or a scrimmage.

The boys’ varsity basketball AOTW is Jackson Selvala. He had 15 points and 13 rebounds against Williston on Wednesday and has provided superb leadership on and off the court as one of our tri-captains.

Our AOTW is Mikey Holland who played like a man on fire against Salisbury on Saturday. He was dominant in all three zones and never quit.