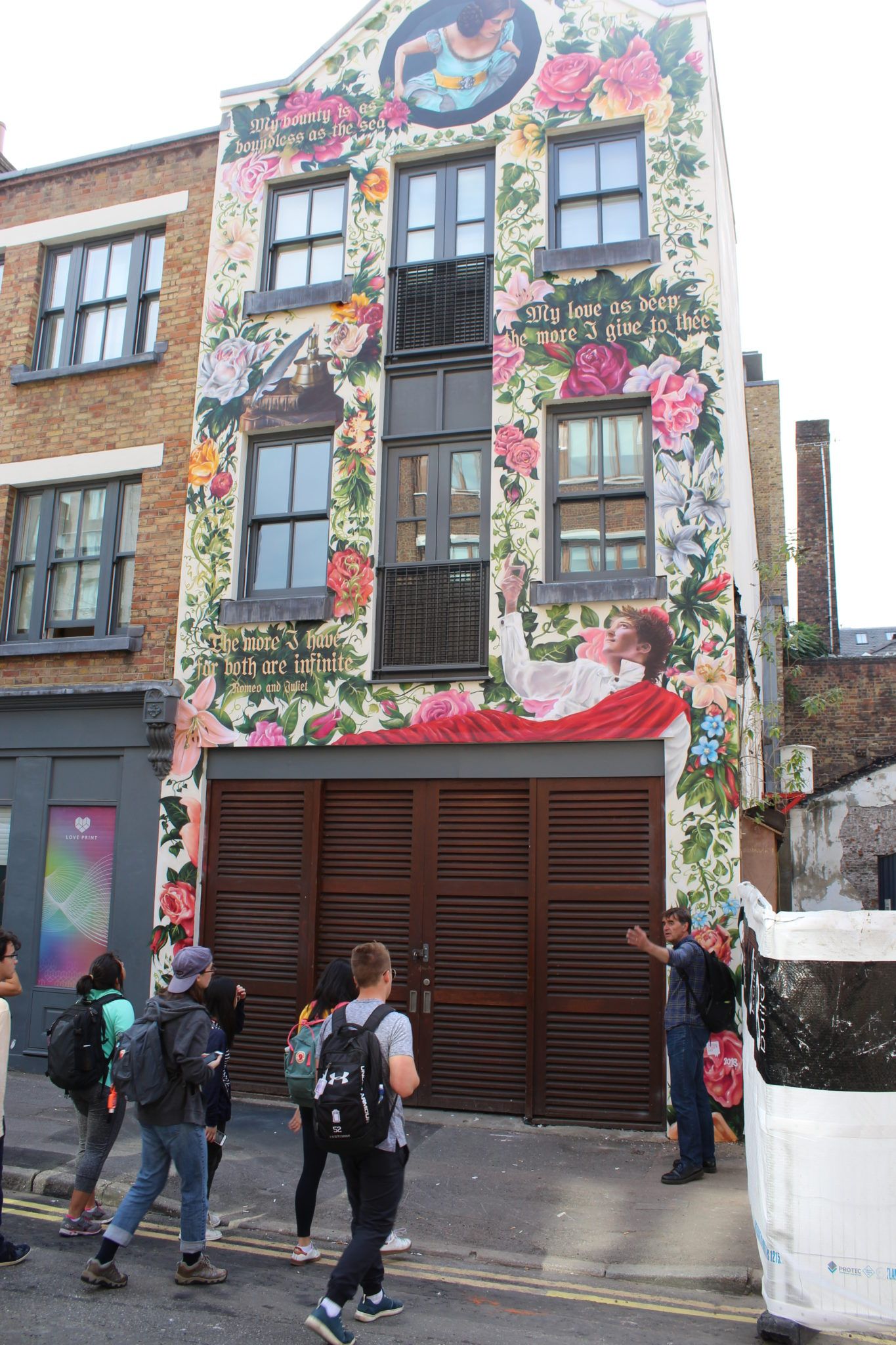 Susan Li ’19 reflects on an “action-packed day full or surprises, challenges, and learning.”

Wednesday proved to be an action-packed day full of surprises, challenges, and learning. Our group began with an early morning in the Crescent Cafe, sketching and fueling up for the long day ahead. Soon, we took the tube to Festival Pier overlooking the Thames River, where we were given a paper frame and straight edges with which we could measure out angles and plan the compositions of our drawings. We used these new tools in our sketches of the iconic London skyline, rendering buildings from modern glass towers, to cathedrals, to the London Eye. Additionally, we were in a large public space which provided lots of opportunities for people-watching and sketching. The viewpoint we had offered a constant, inexhaustible variety of sights, ever flowing and changing with the tides of people and the river. We had to work quickly to capture one moment and one space with the limited time we were given- a challenge both exciting and frustrating.

Next, we continued on to the Barbican complex, where we met with our guide Carly. Carly was an architect who was interested in designing inter generational spaces which could welcome people of all ages. Prior to our meeting, we all read a packet detailing the importance of considering London’s aging population in the city’s design. With this in mind, Carly focused on how the Barbican complex catered to the elderly. The complex itself was like a semi-private island containing apartments, shops, restaurants, galleries, schools, parks, and meeting spaces from outdoor tables to a cinema/auditorium. It balanced natural gardens with concrete architecture, and its mix of public and private spaces made it an intriguing experiment in a new way of living. The Barbican space also posed a question of who dictates the form and function of a space, and who should dictate the space. We explored how both corporations and city government played a role in managing the lives of the Barbican residents, how public use and desire for privacy created a mix of public and private spaces, and how the architecture of the building drove human connection, as meeting spaces and walkways were all designed with ease of social interaction (intentional or unintentional) in mind. 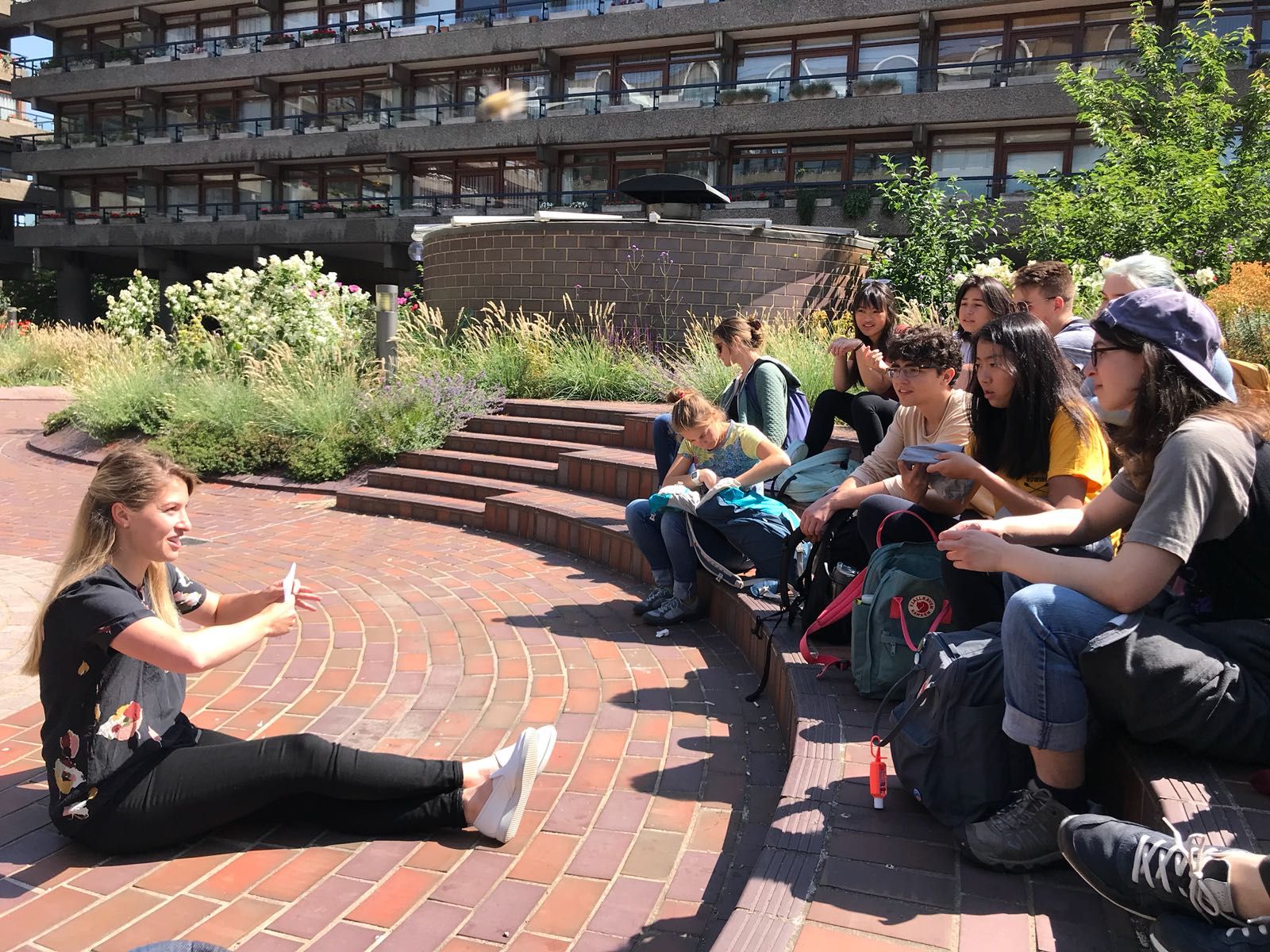 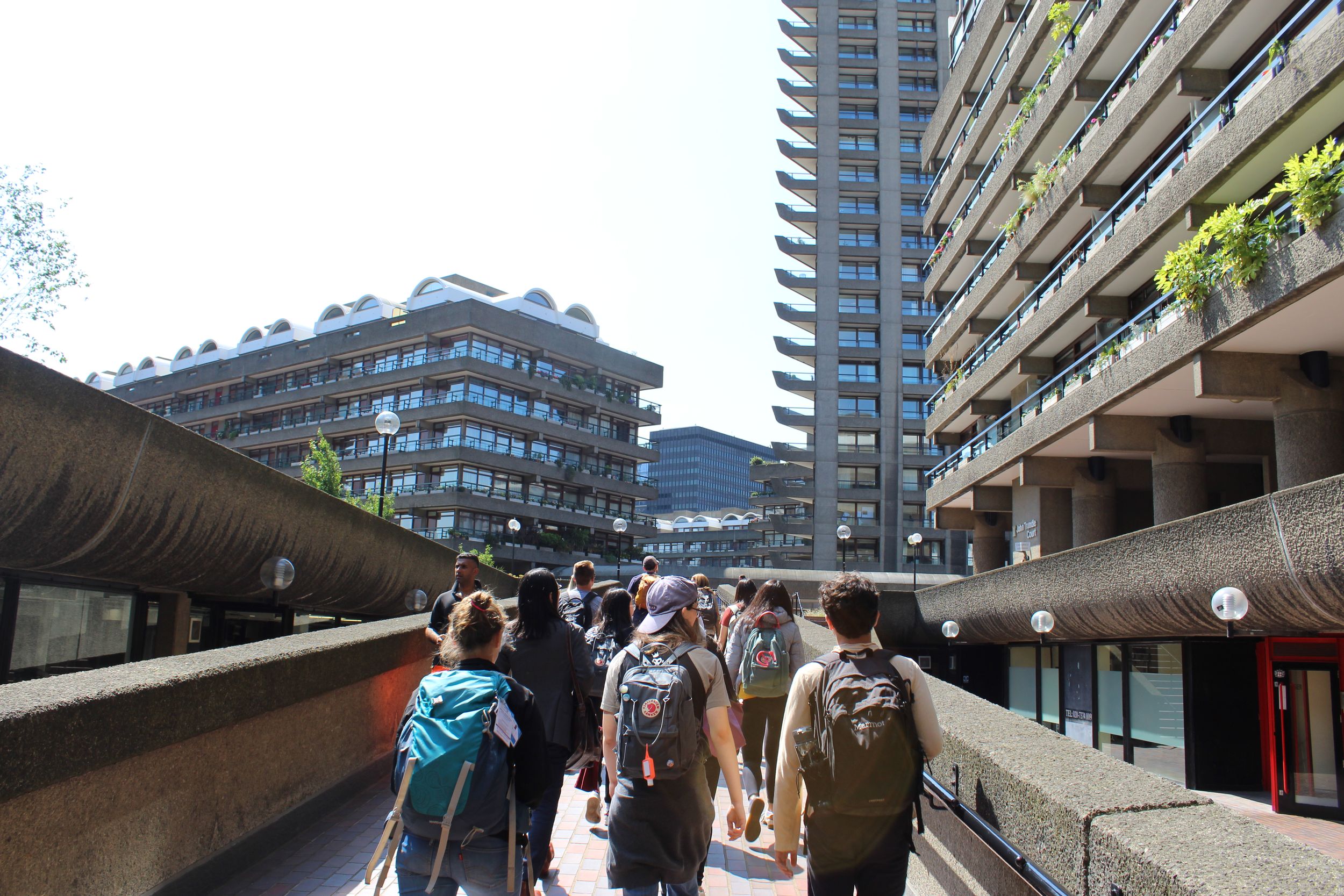 We continued to explore the theme of curation and who dictates a space on our London graffiti tour with Dave, our tour guide. Threading through intersections, alleyways, and streets, Dave pointed out and explained street art from murals covering entire buildings to drawings done on pieces of gum on the sidewalk. He continually explored tensions in the world of street art between the government, which could arrest artists doing their art illegally and without permission; corporations, which could use art as a means of seeming accessible and socially aware; the public, which was the audience for the art; and the artists, who had to choose what their art depicted, what message it would have, and how it expressed the message. 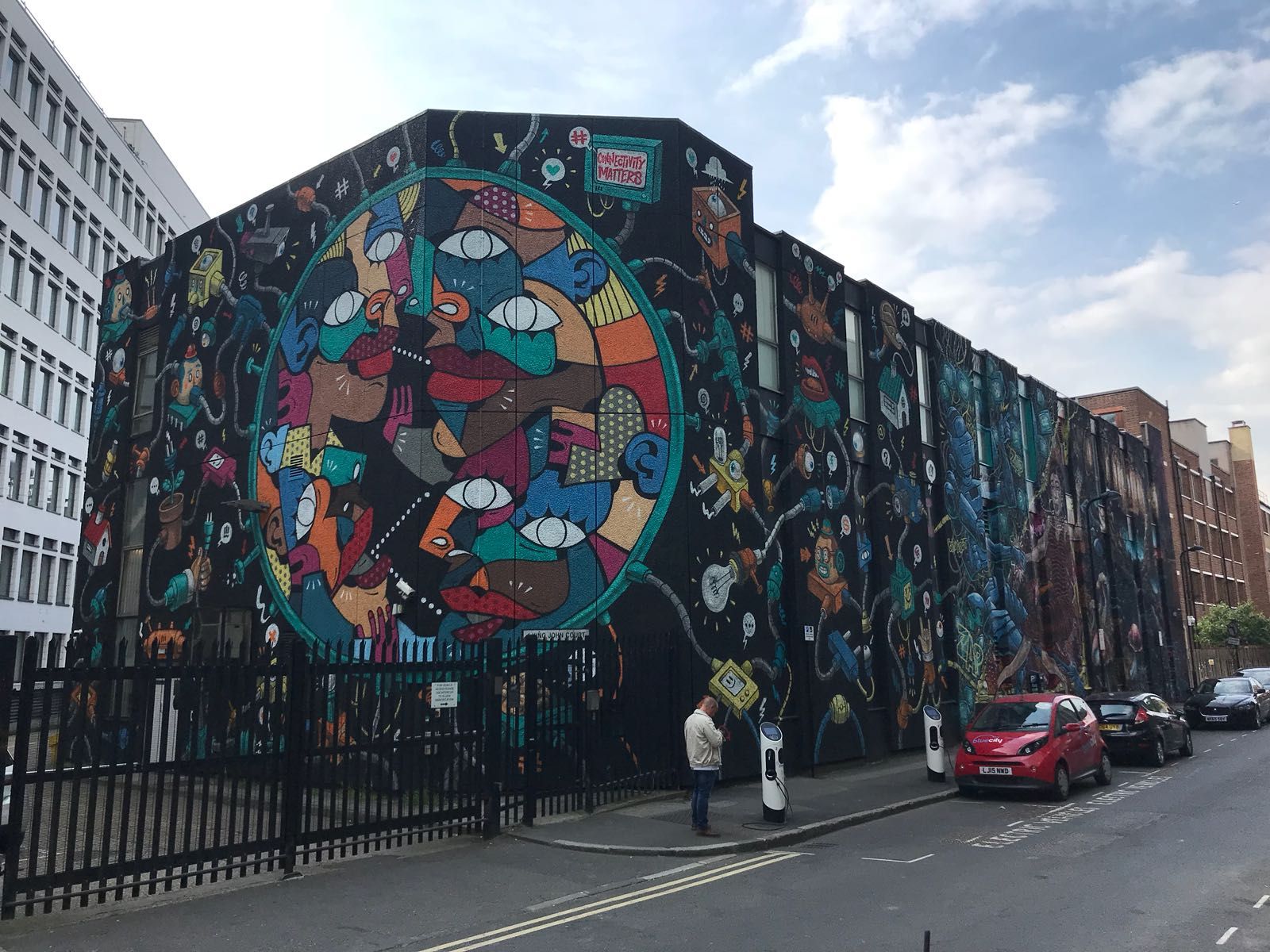 Dave offered a radical perspective in his view of art, contrasting it to art shown in galleries or museums. Street art, he explained, should be instantly accessible and self-evident, meaning that conceptual art had failed the mission of street art. Since we had seen the Tate Modern and Tate Britain, two of England’s most prestigious art institutions, only a day before, Dave’s explanation contrasted what we had just seen. Street art was also constantly flowing and shifting- erased or decayed or re imagined by other artists, compared to gallery art which was pristinely preserved. It resisted being captured by time or authority. The rich history and culture of street art we explored shifted the streets of London from utilitarian walkways into works of art and monuments of history, each carrying their own stories and tensions. I came out of the tour with a newfound appreciation for the art all around me and determined to learn more about the context of these works. 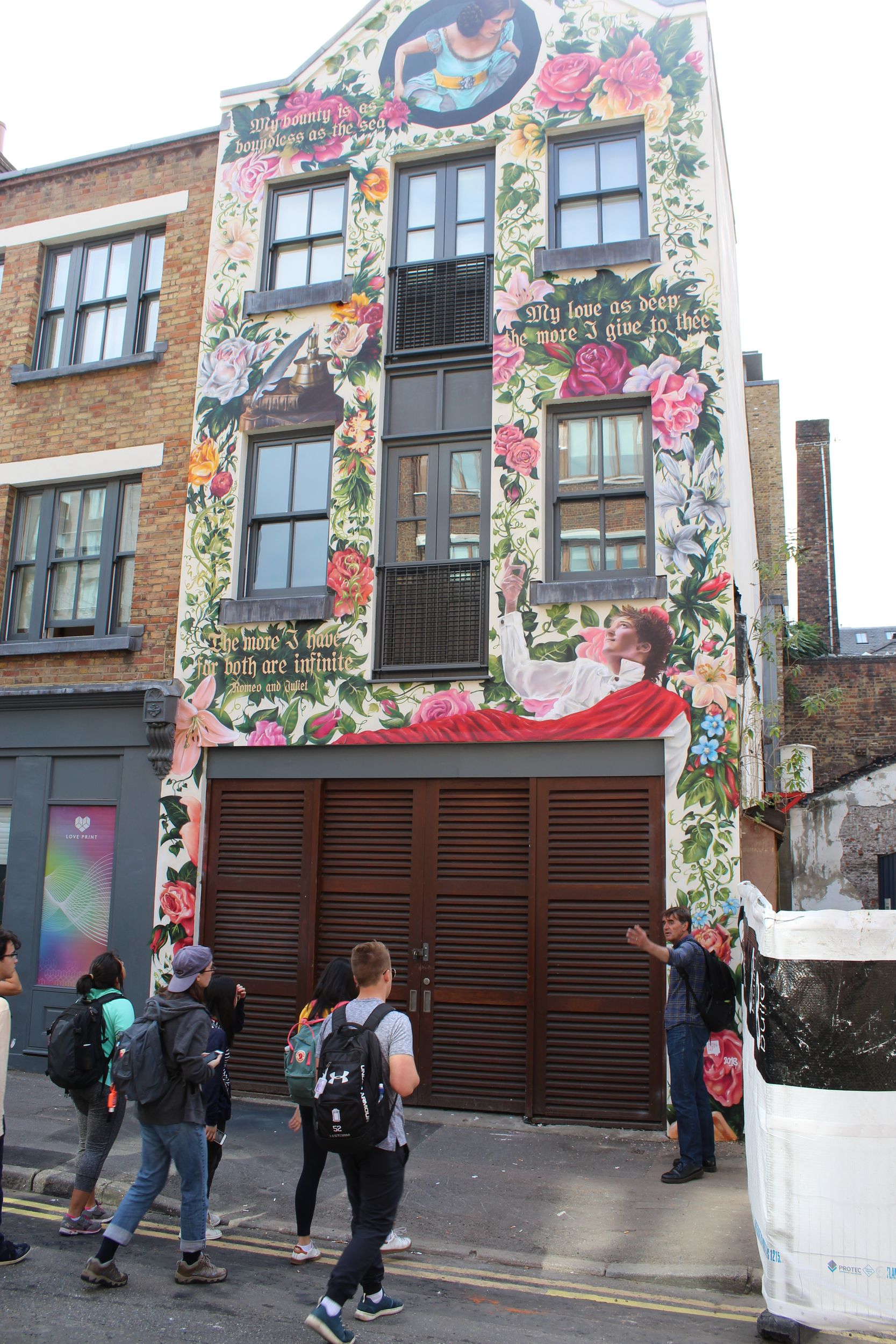 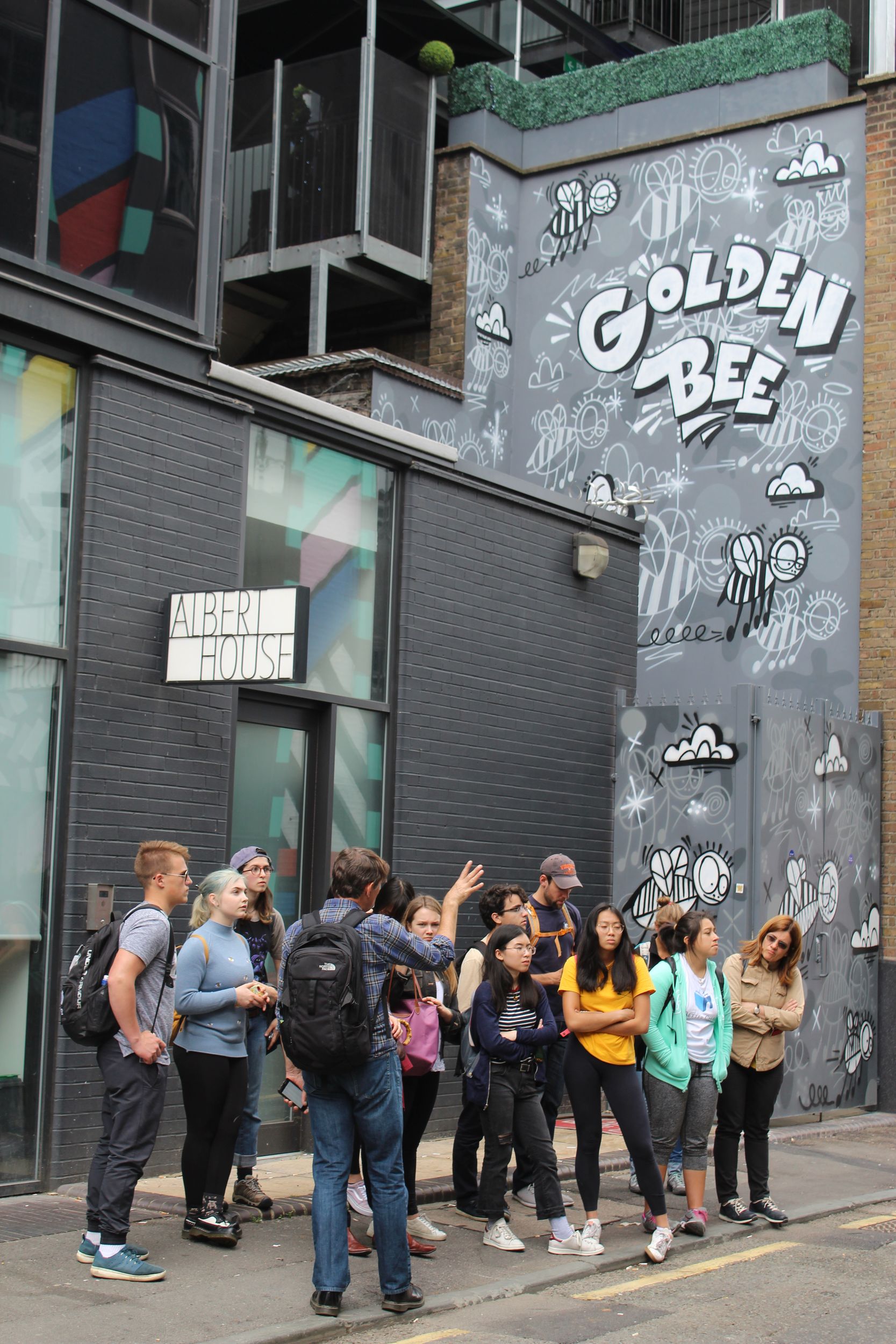 After our tour, we explored more street art without the help of Dave, in the Nomadic Community Garden. This park featured art on every usable surface, and we even got to watch street artists in action as they spray painted a portrait. Although the park itself was closed, its perimeter was still lively and covered in artwork. The park was a bit out of the way, so it didn’t seem to feature many tourists or visitors. Thus, we got a more raw insight into the street art culture in London, which was both gritty and beautiful.

The major themes of the day were curation and capturing. Through street art, we were able to explore the intersection of the themes, questioning who curated street art and how street art wasn’t necessarily meant to be captured and preserved. In Barbican, we also explored curation, questioning how to design a space for inclusivity of all ages and backgrounds. At the pier, we practiced capturing the cityscape in sketching. The day began pretty standard, but by the end of it my perspective on art had radically expanded and shifted. Tomorrow promises a fresh slate of activities, but I will carry today’s lessons for the rest of the trip and beyond. 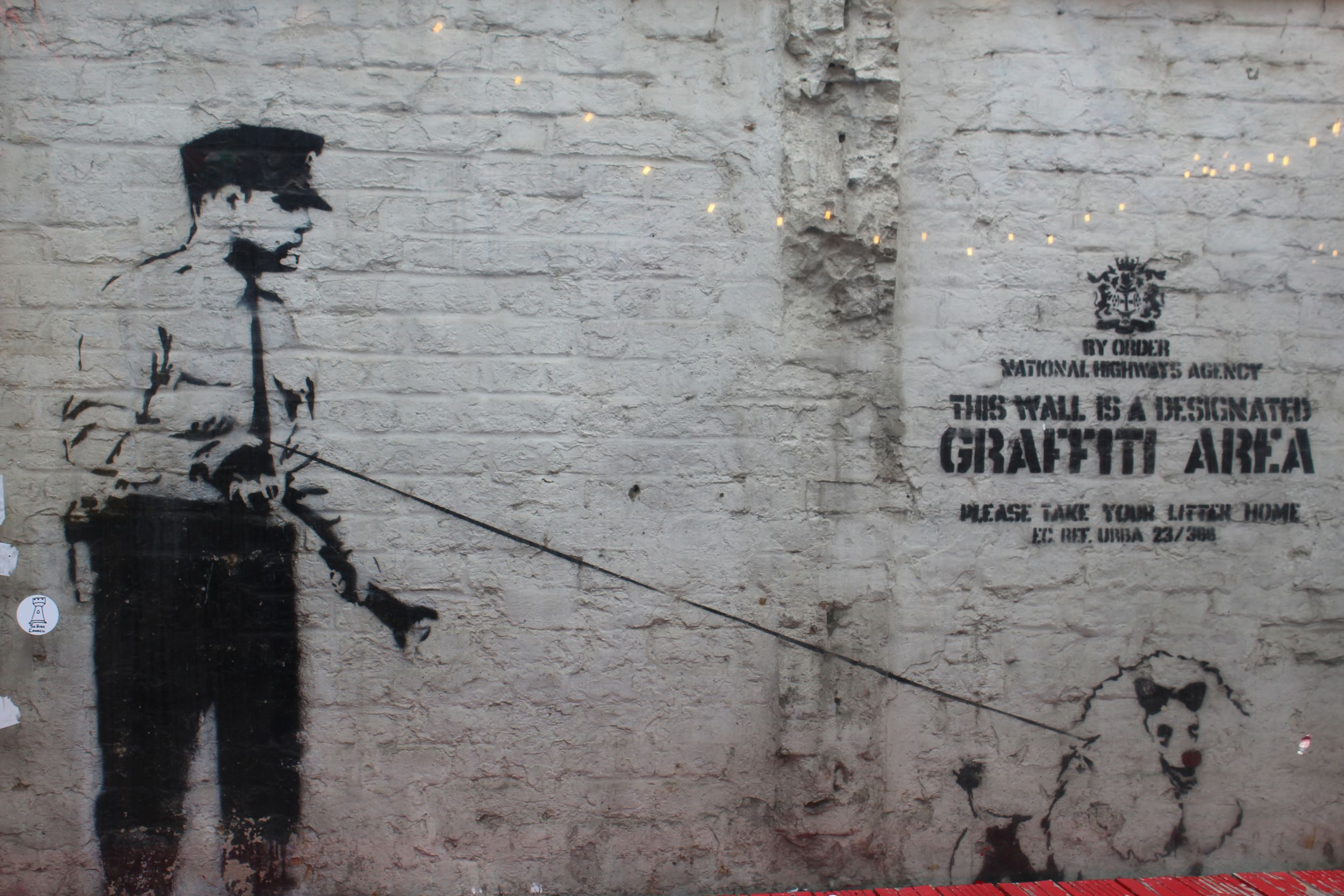 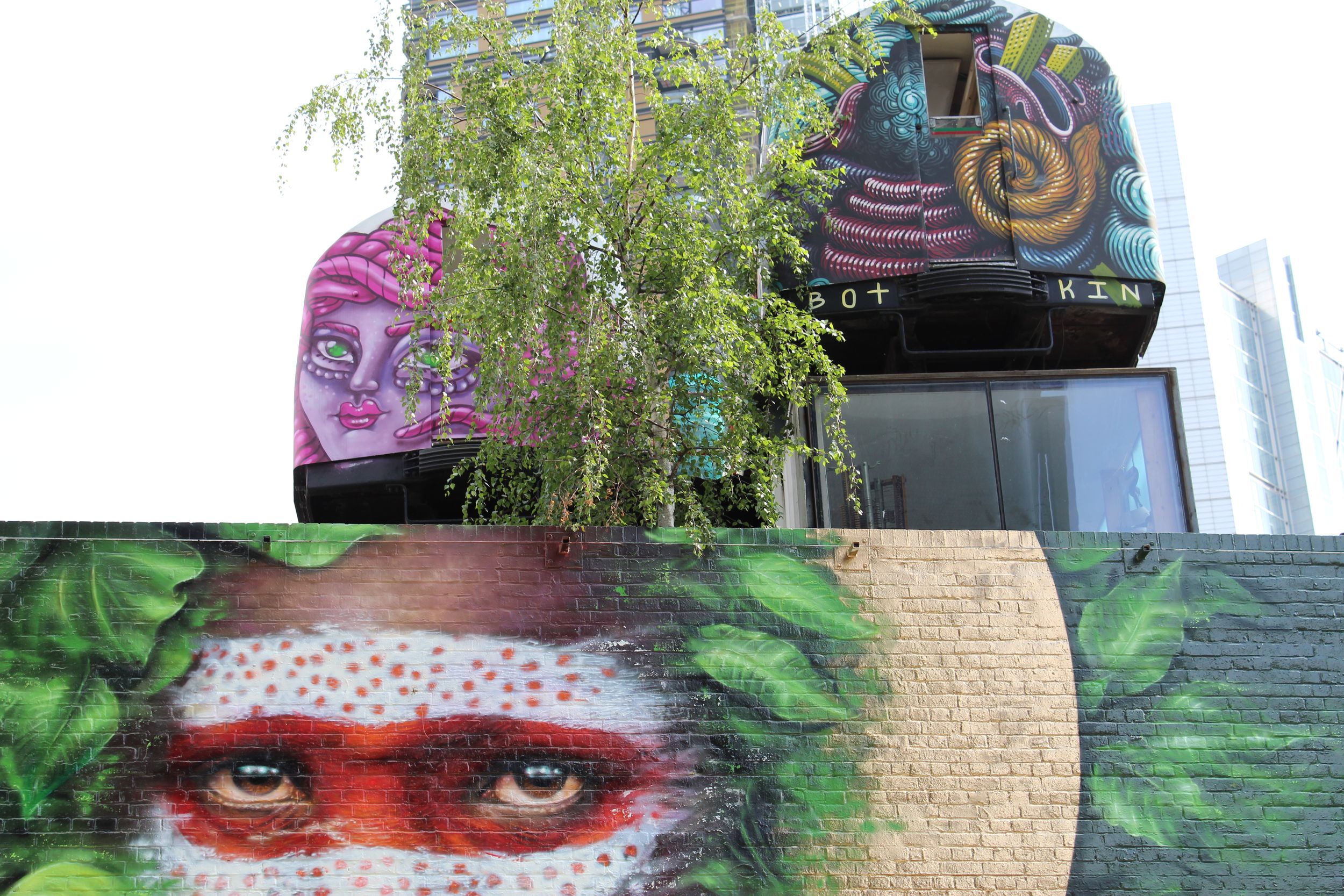 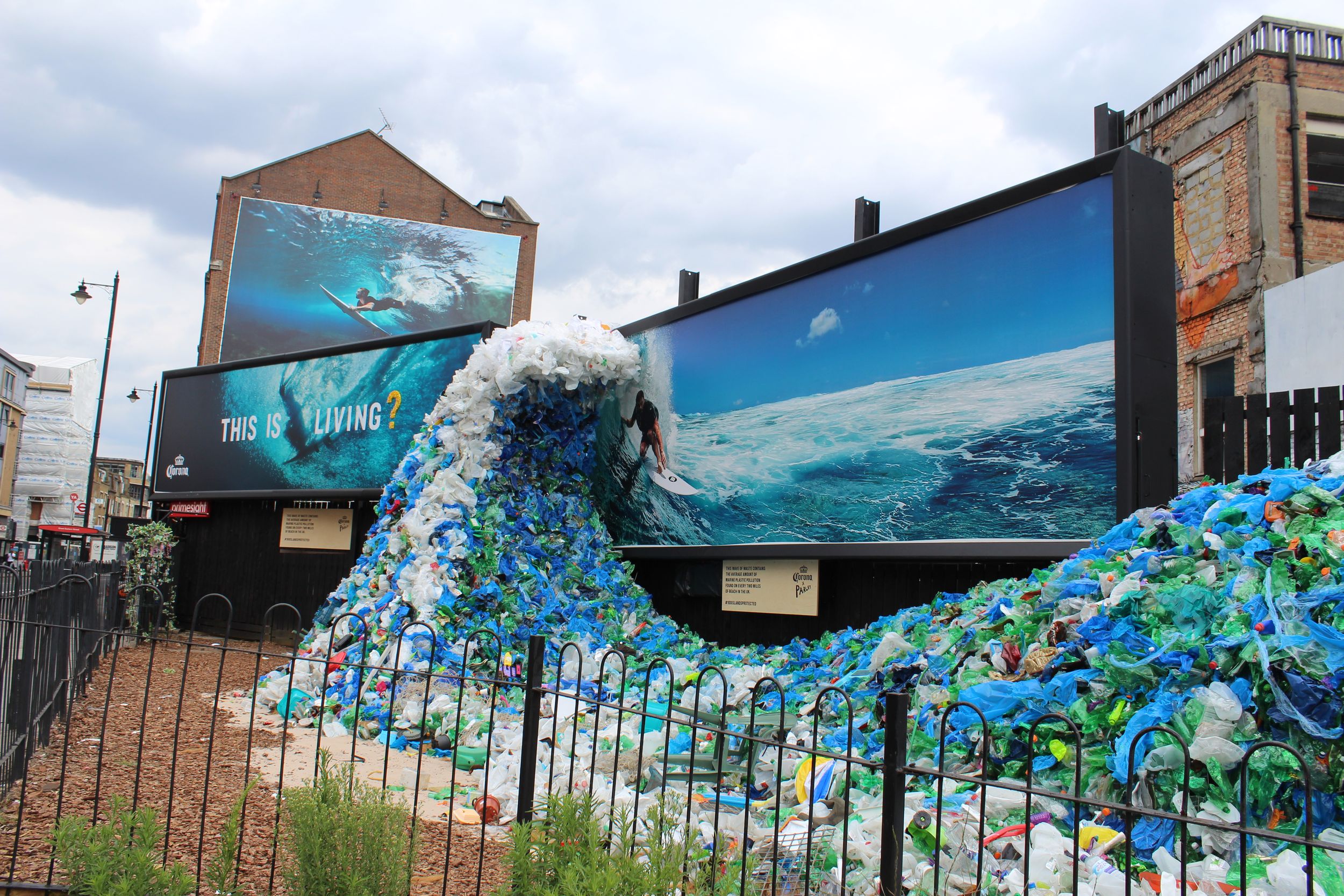 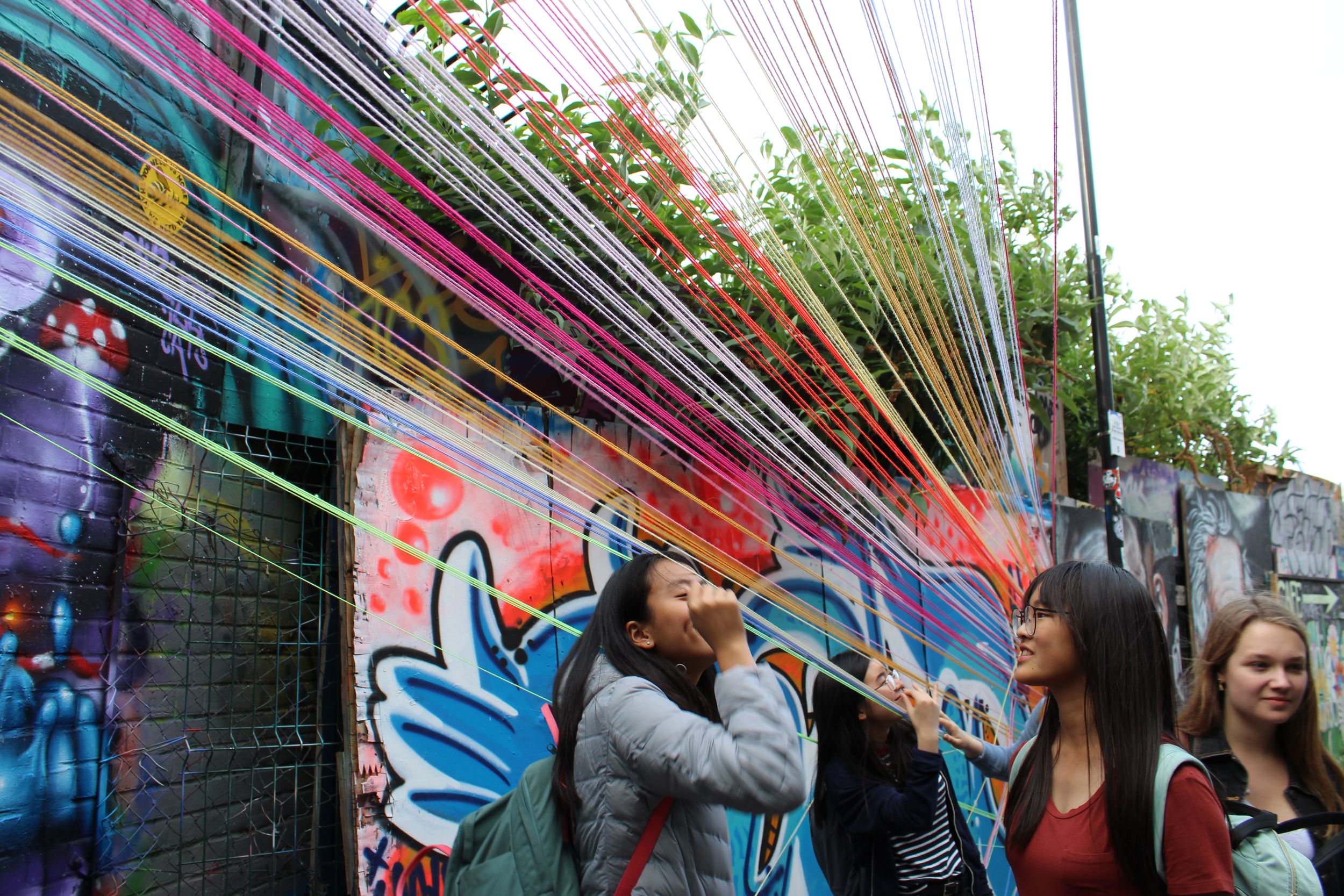 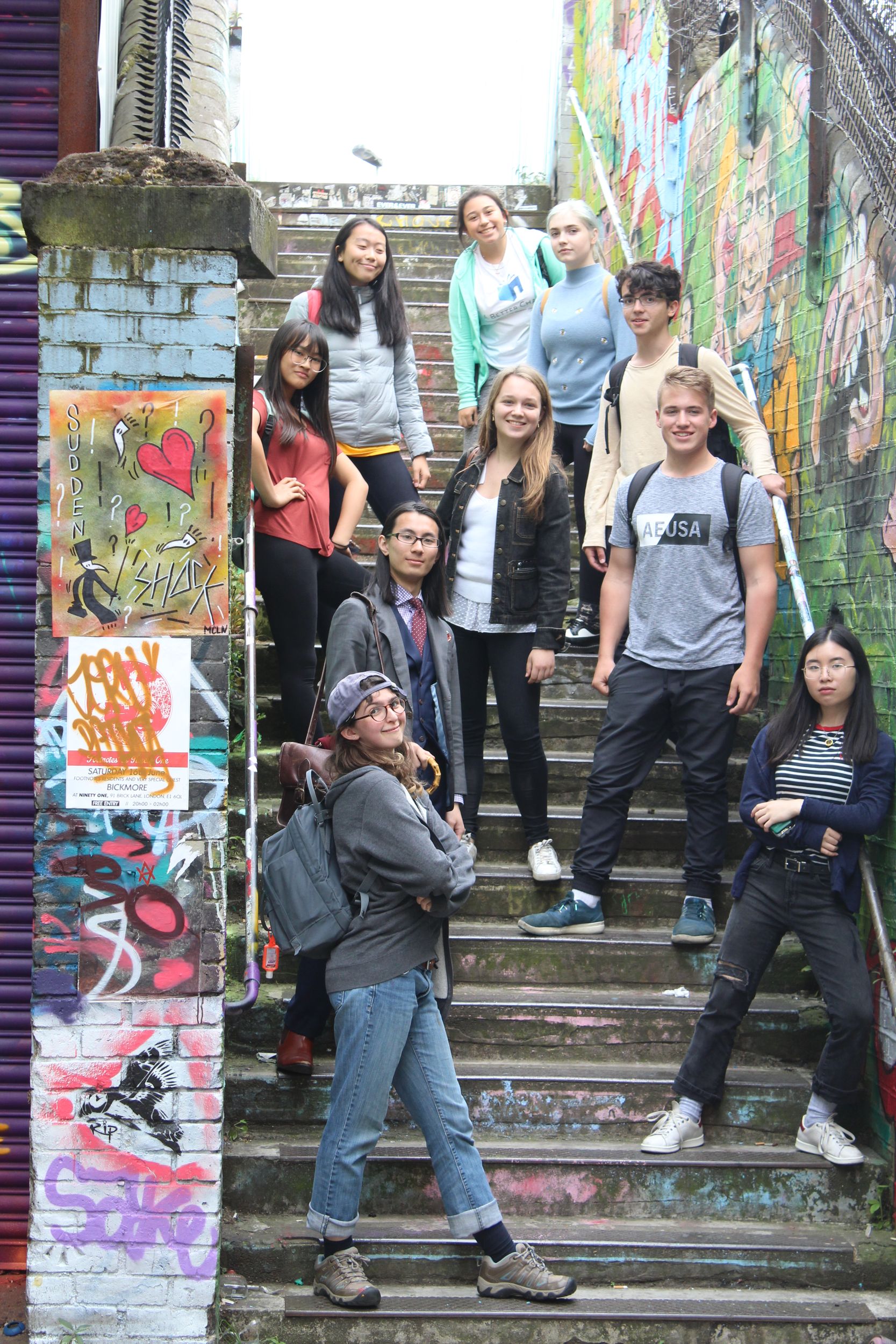 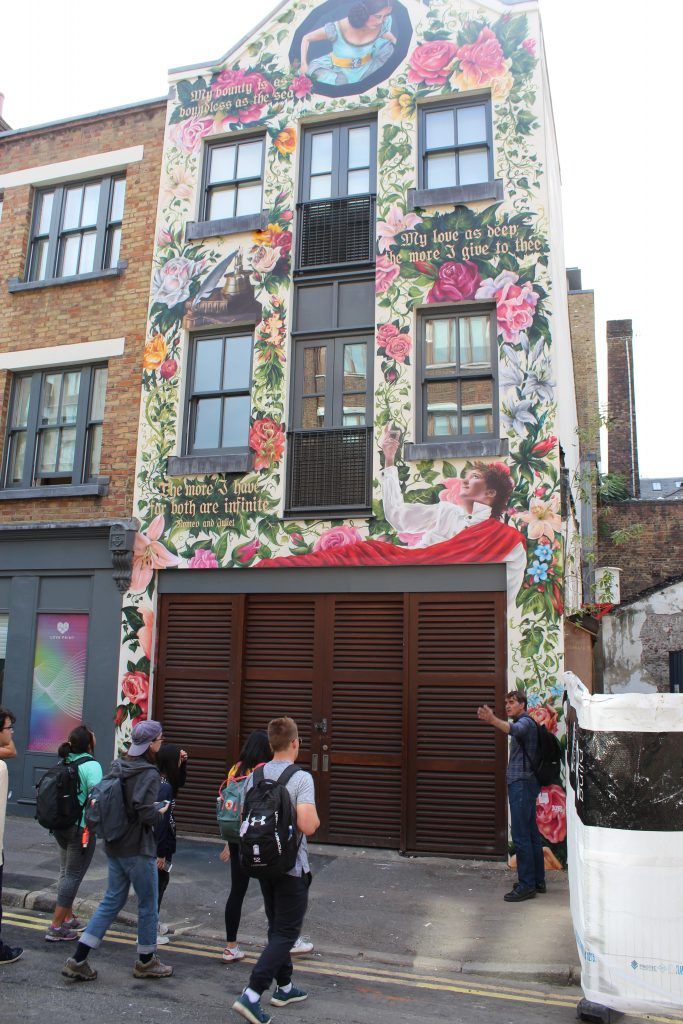