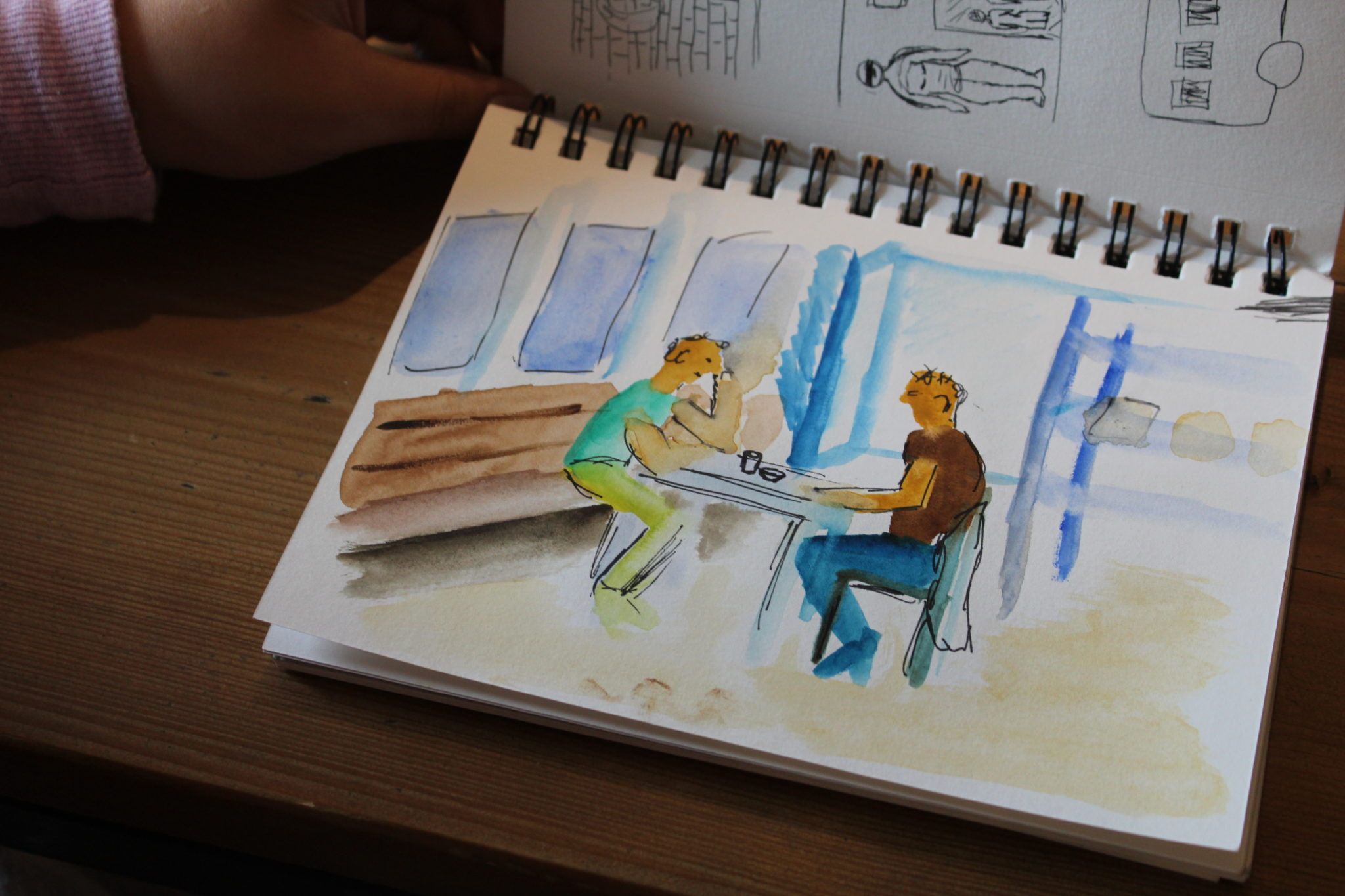 Henry Pan ’19 considers the meaning of “capture” through drawing and sketching activities while visiting a local Jazz cafe, Neal’s Yard, and the Tate Modern.

Truly a historical city, London was the ideal location to explore our theme of the day, ‘capture’. With activities such as drawing passersby in Ray’s Jazz Café, sketching in Neal’s Yard and a visit to the iconic Tate Modern, we were further immersed into the British culture and encouraged to consider the theme of ‘capture’ from different perspectives and meanings.

In the early morning as local bookworms, workers and friends gathered in Ray’s Jazz Café placed on the top floor of a Foyles’ bookshop, we began capturing these figures in our sketchbooks by the medium of ink, graphite and watercolor. The focus of the drawing exercise was technical, however as we delved deeper into the process I began noticing the details and implications of people’s subtle gestures. The readers, with cups of hot drinks and books of their choosing seemed the most relaxed as they slightly reclined or leaned in a natural manner, most of them remaining still for long periods of time and focusing on the gripping entertainment at hand. The gathering of friends, equally relaxed but more passionate on the outer engagements as each person on the table moved frequently, either gesturing a story or attentively engrossed in the tales of others. 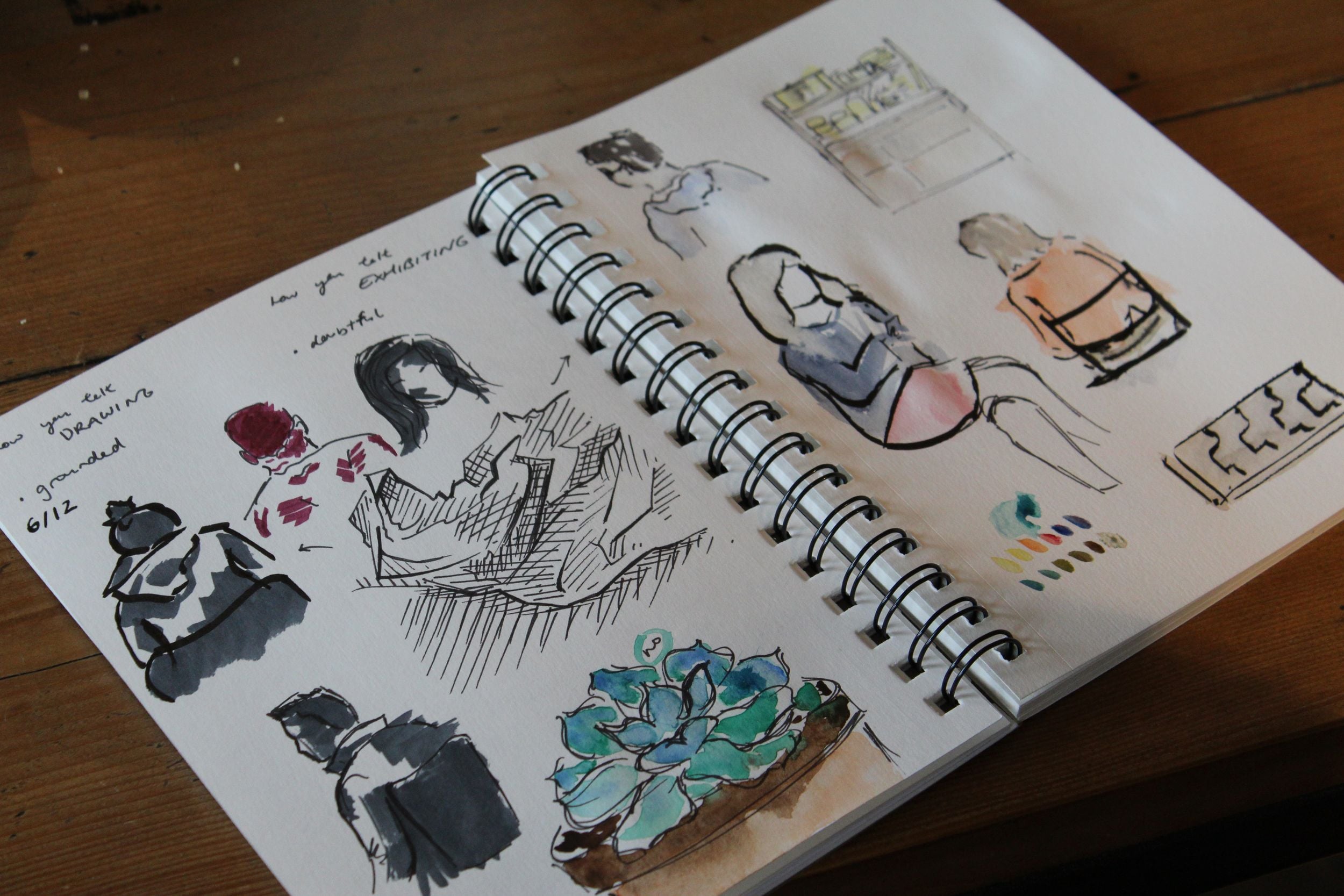 The work meetings, by comparison were more still and continued in a calm fashion – each member of the meeting hoping to make the best impression upon each other; they only moved to gesture their opinions or to drink their beverages. Then came the lone workers who either fidgeted with slight anxiety or seemed at peace and comfortable with the progress. In the beginning I captured the form, but as each figure became more familiar I started attempting to capture also the narratives, the mood, and the emotions in each distinct figure. A challenging task indeed, especially on the technical aspect of rendering figures with accuracy, speed and ease, but others and I are progressing soundly on the journey of ‘capture’. 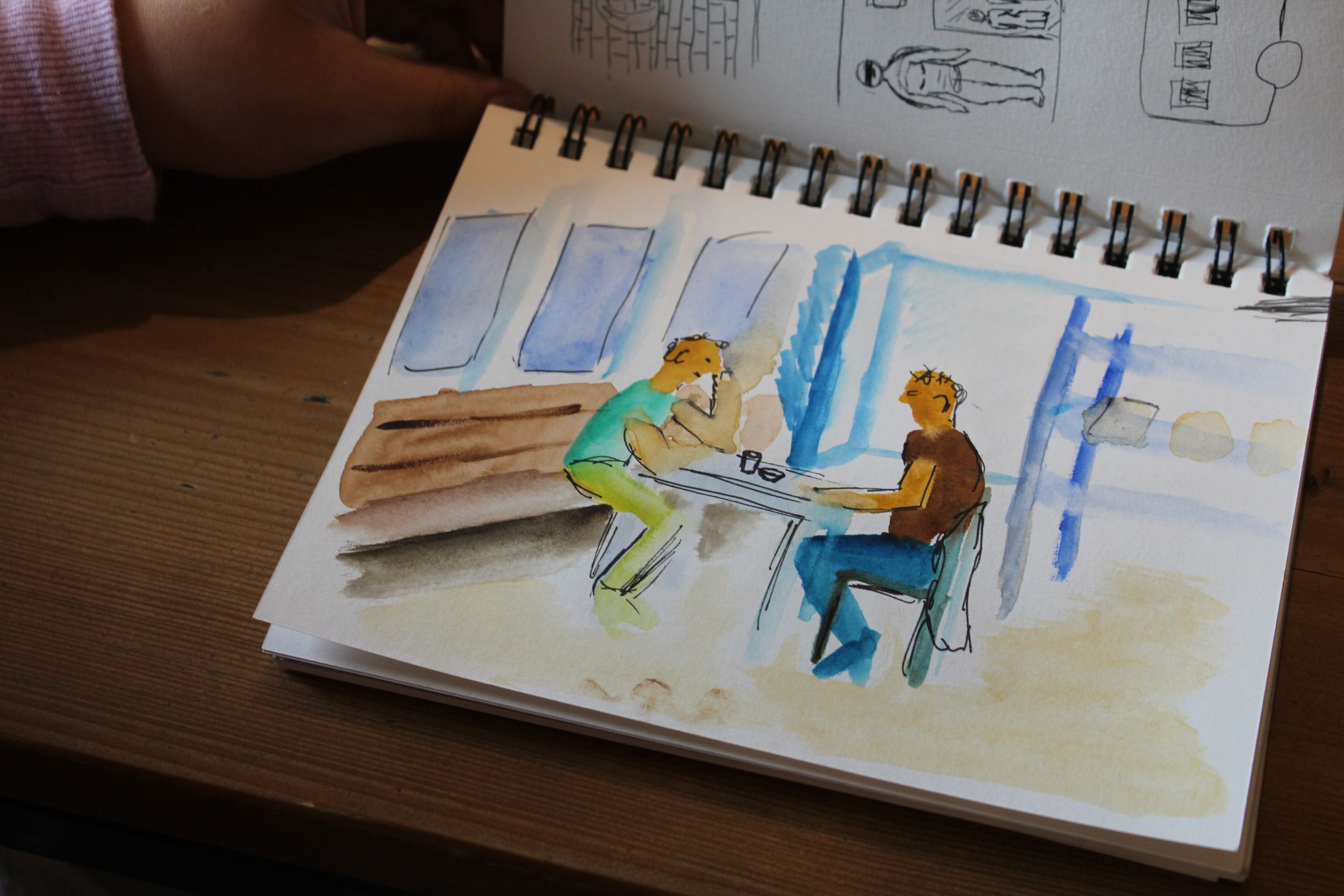 Neal’s Yard is a small and intimate alley which opens into a courtyard filled with colorful buildings, vivacious flowers and a flurry of people exploring the diverse cuisines and shops; here we made our stop to sketch the exteriors of the space. With close renderings of the buildings I developed an appreciation for the differing architecture and decorations, which were all squished into tiny alleyways – a cornucopia of culture capturing both our attention and encouraging us to capture its charm in our drawings. The drawing of the exterior did prove difficult and even frustrating at times as I attempted to properly draw each window and door with accurate scales. The charm of the building, however, did remain clear to me throughout the drawing – for example the contrasting vision of a commercial spa, with its doors lined with advertising slogans sitting directly beneath a bouquet of flowers and vines extending outwards from a window. I attempted to capture, by way of sketching a corner of Neal’s Yard, a tiny piece of London history and culture. 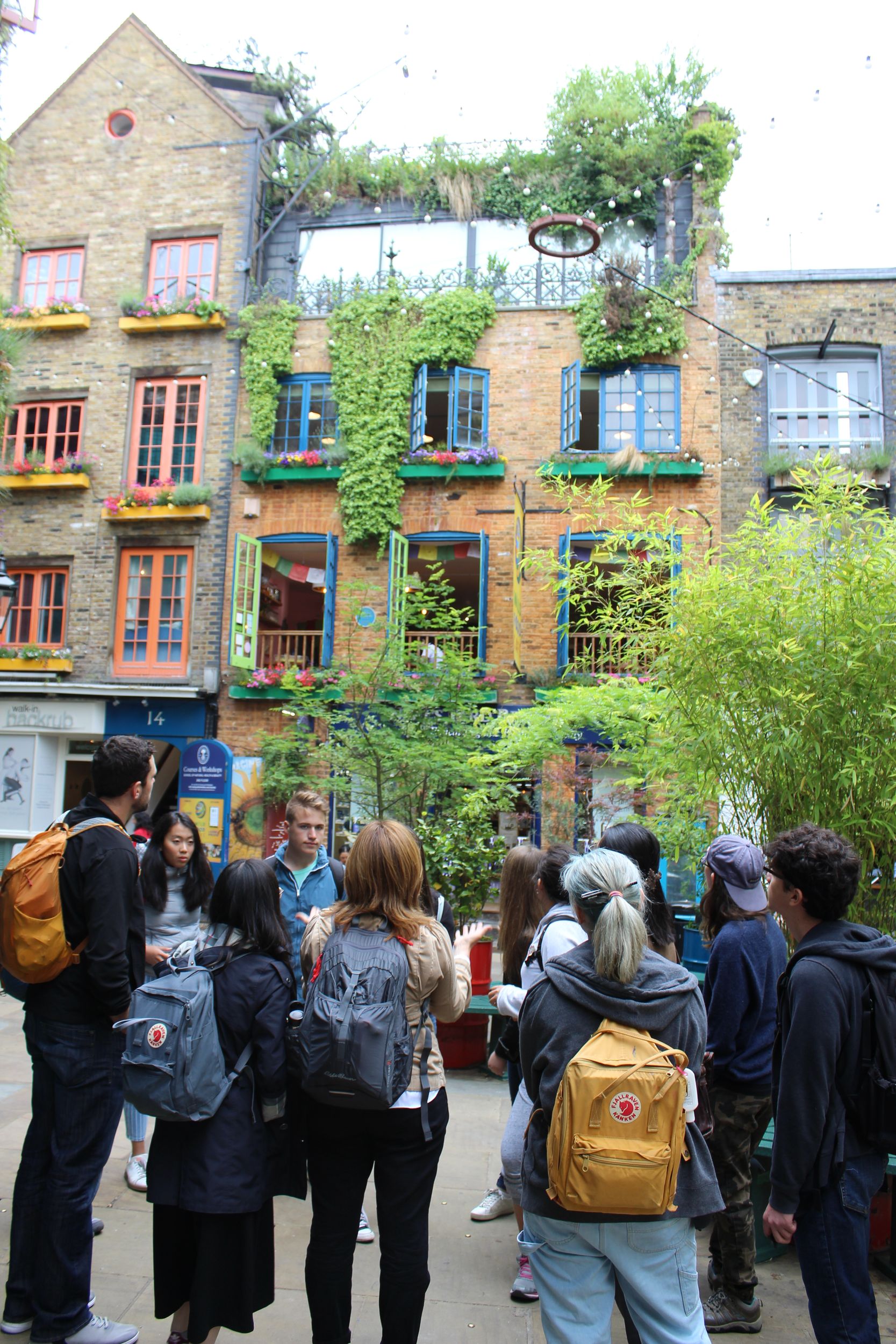 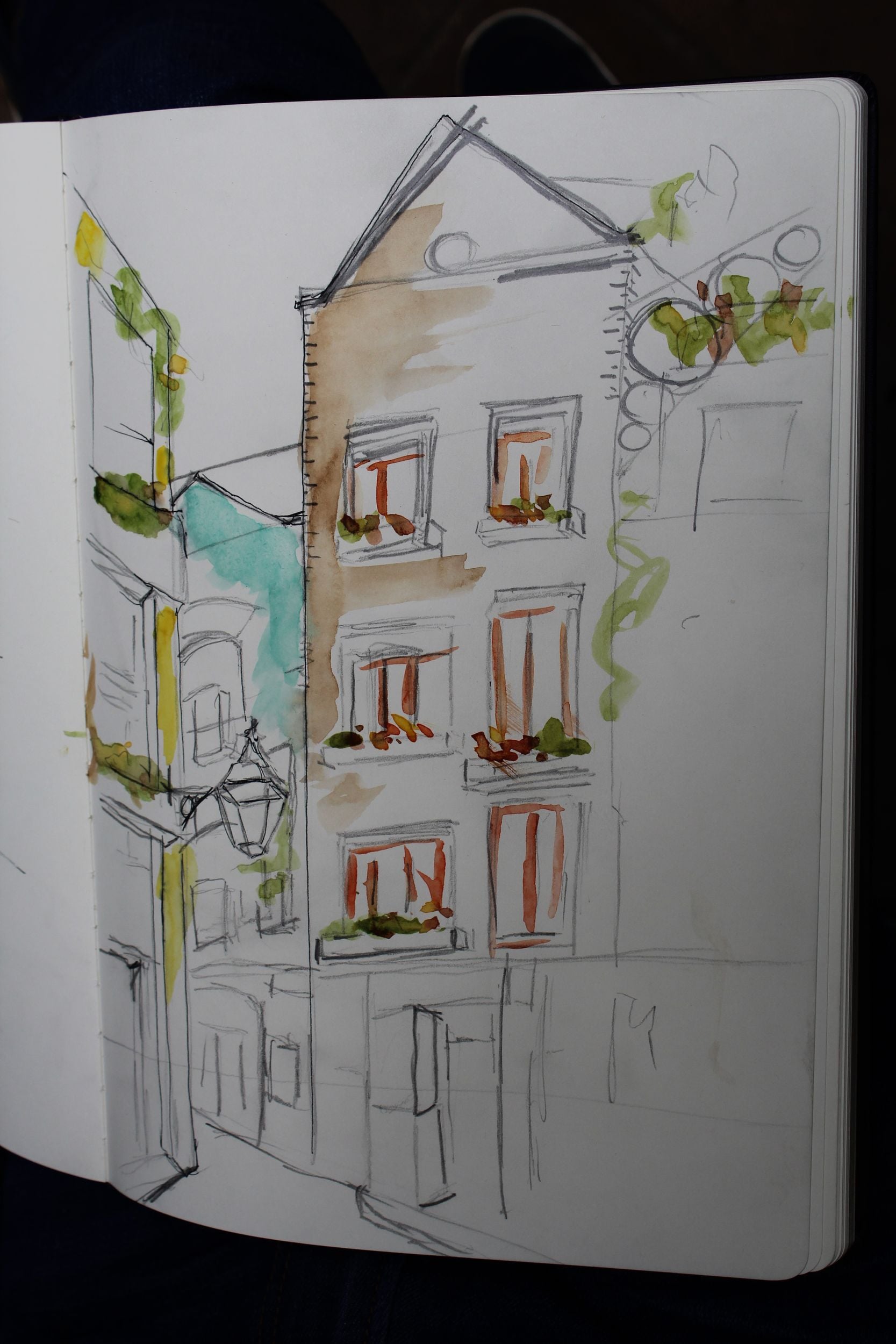 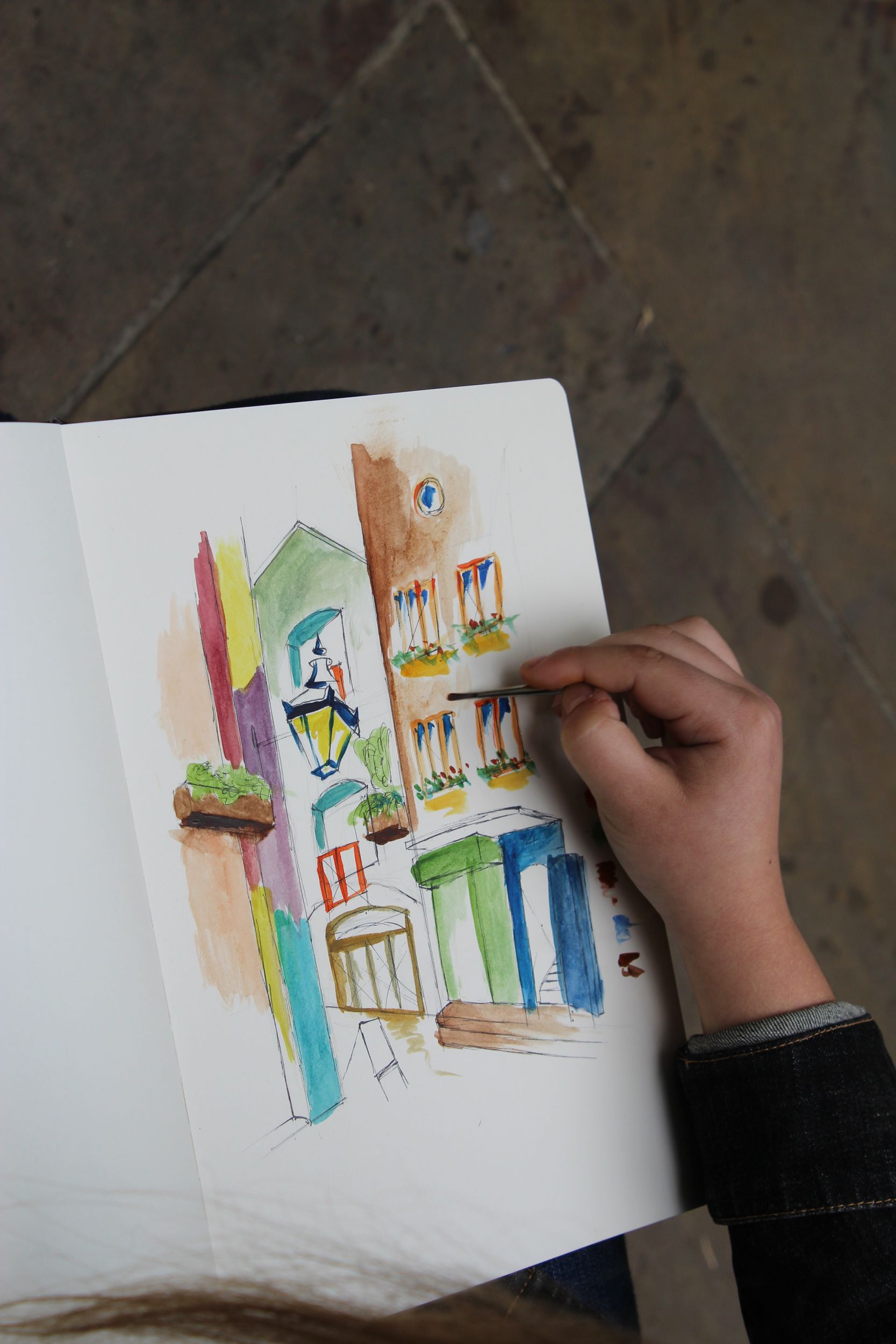 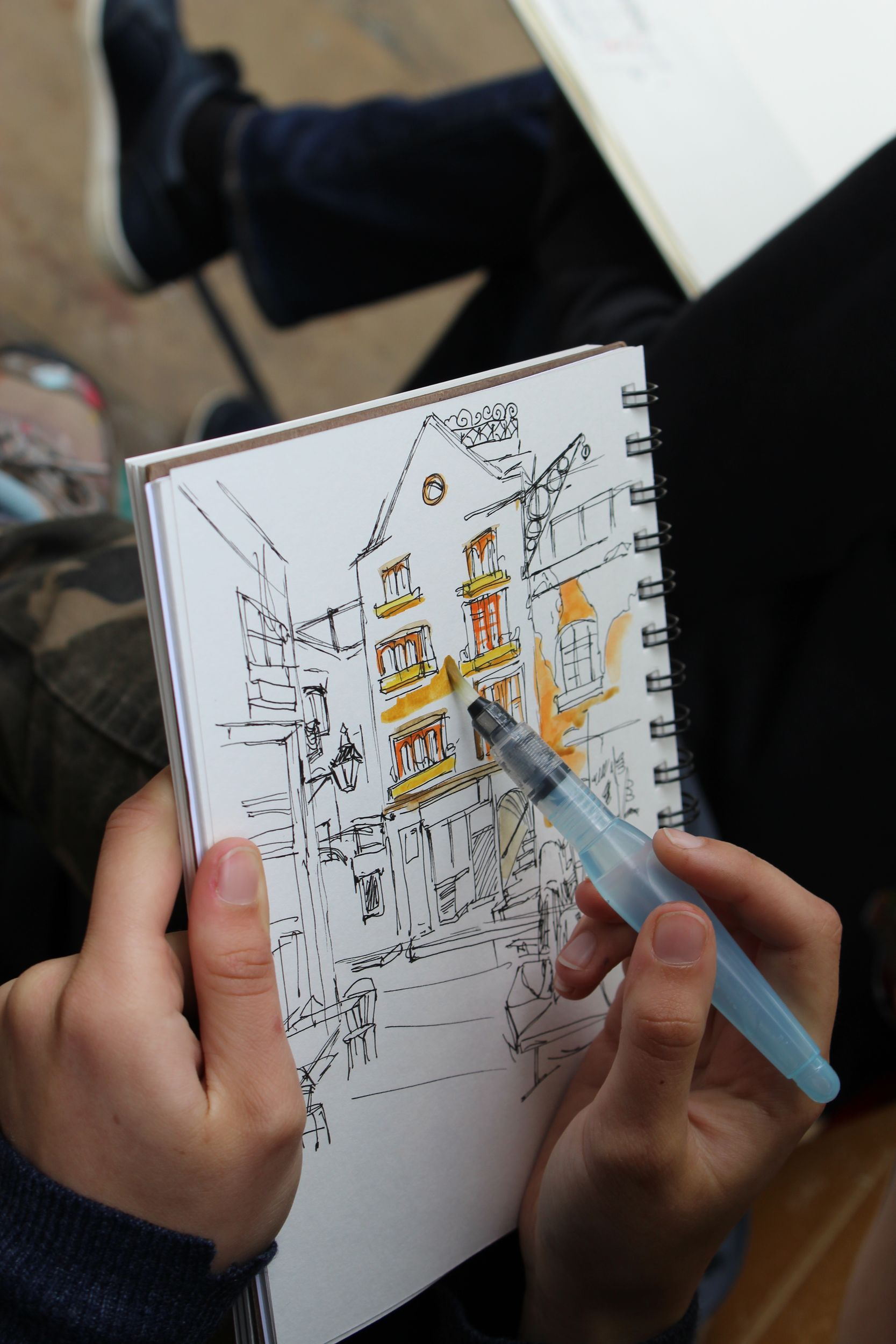 The Tate Modern, the more cosmopolitan and contemporary counterpart to Tate Britain expanded our interpretation of ‘capture’ to a new level. With a vast array of international artists, the Tate Modern showcased artworks that ‘captured’ a myriad of aspects – the world, the audience and certainly the artists themselves. With issues ranging from the IRA ‘dirty protest’ in Northern Ireland to the Spanish Civil War, artists captured the world’s conflicts at large and with it the horrors of the brutal truths as well as the astonishing resilience of the human spirit, both elements which in turn captured the audience in thought to interpret the depicted subjects beyond facts. Artists themselves too, were captured in the works. For example the abstract paintings by Rothko not only gave a free rein to the audiences’ imagination and interpretation, but also stood as a statement of the artist’s purpose – in Rothko’s case perhaps a desire to engage audiences deeper than simple decorative pictures. Thusly, the Tate Modern exhibited for me not only the artworks but the limitless potential of the human ability to capture anything we hope, whether it be the concrete history, scenery, beauty or the abstract purpose, desire and emotions. Though at this junction we budding artists remain focused on the development of technical skills, I was inspired by Tate Modern to consider the immense possibility of the development of our individuality and ideas. 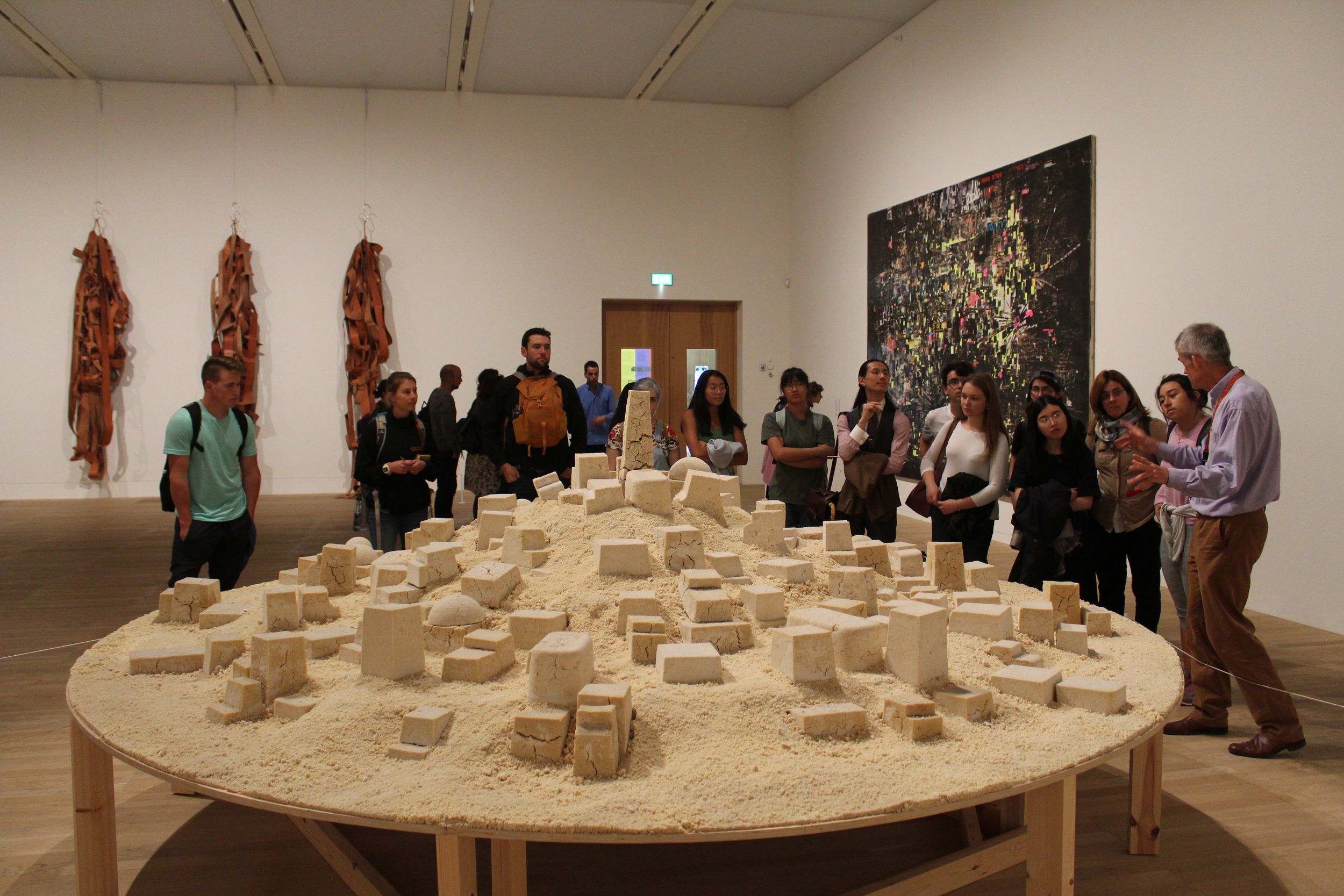 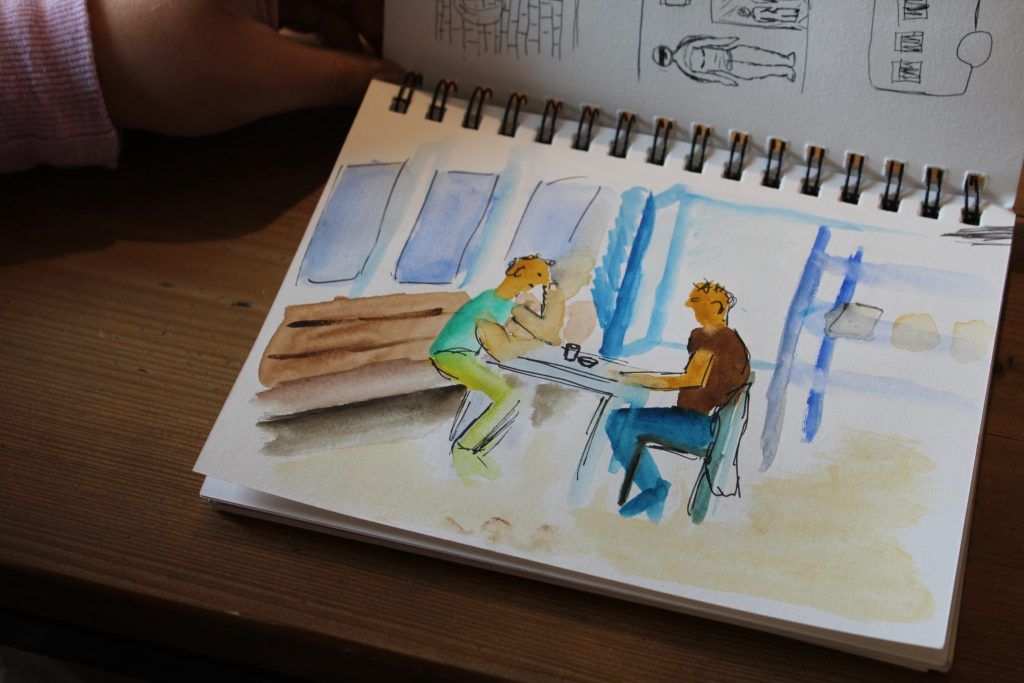