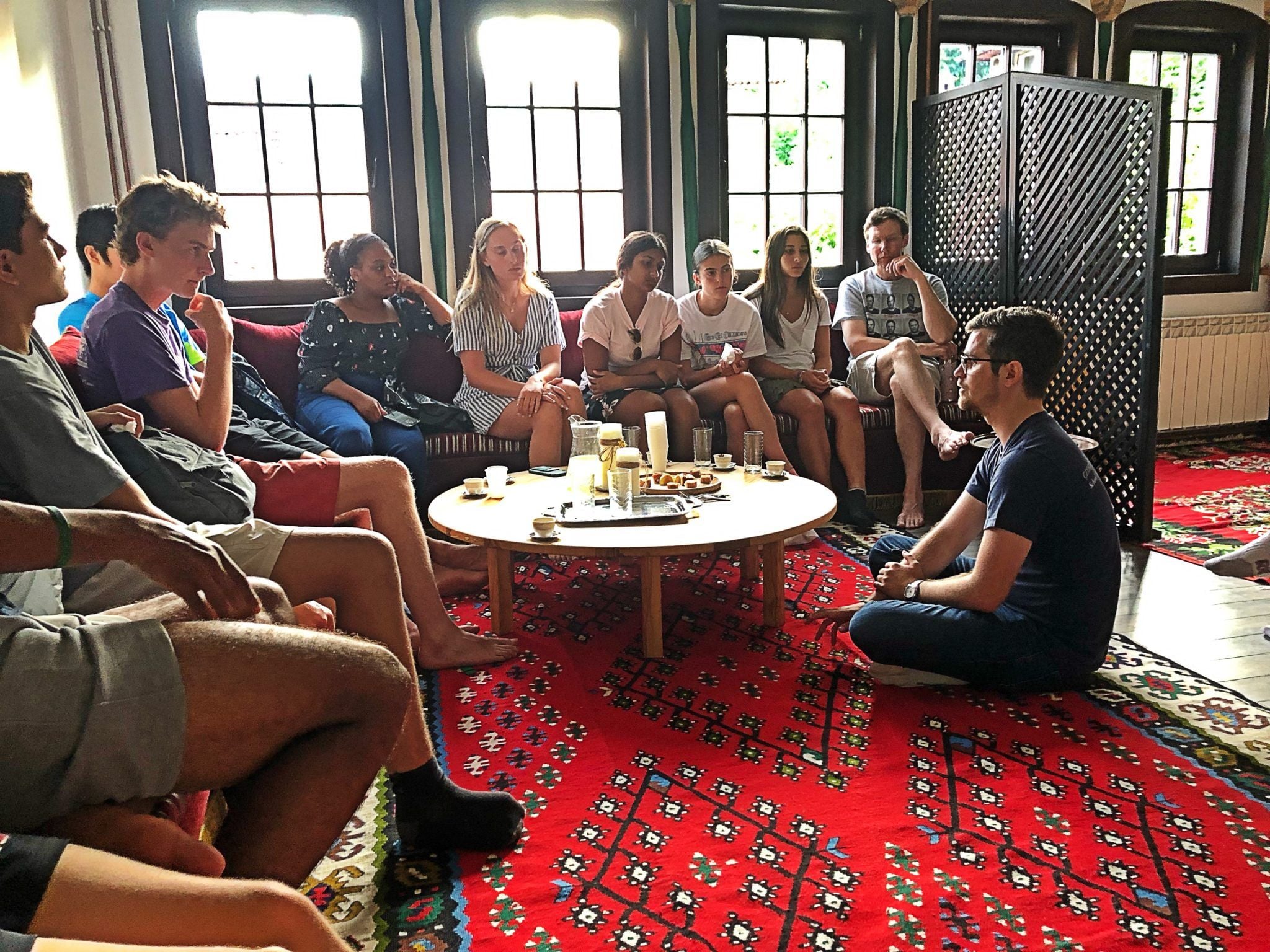 Seth Blain ’20 and Alton Machen ’20 consider the importance of gathering facts before “formulating an opinion.”

We had an extra early wake up to arrive in our third country of the trip. We left Belgrade and drove along the sheer cliffs of the Dinaridic Mountains into Bosnia and Herzegovina. After driving for hours past gorgeous landscape, speckled with houses and farmland, we arrived in Srebrenica. To the uninformed traveler, such as I was upon arrival, Srebrenica is indistinguishable from the miles of barren land we had spent our morning driving by, but we soon learned that Srebrenica was the site of the largest single atrocity in Europe since World War II. There was a cemetery that commemorated those innocent Bosniaks (Bosnian Muslims) who lost their lives at the hands of the Bosnian Serb Army, who wished to eradicate Muslim people from the area.

After the cemetery, we visited a memorial that displayed artifacts from the catastrophe, and spoke to one of the survivors of the Death March, Hassan, who ran the exhibit. Hassan recounted his traumatic experience in Srebrenica in July of 1995, where he lived at the time. He was one of the only Muslims to witness the massacre and survive, but in it he lost his father, uncle, and his twin brother. The Serbs took the Muslims by force from a designated UN “safe haven.” Srebrenica was not safe, however, and the Serbians easily captured the Dutch soldiers that were supposed to be protecting the area and used them as hostages.

In school, we learn that history is the set of stories we choose to tell. As we travel through different countries, we see how nationalist leaders in the region pick and choose the stories they tell their citizens, and censor the information they receive. The day before, we spoke with four liberal Serbs, and when asked about the Srebrenica massacre they said that although it was a case of ethnic cleansing, it was not genocide. After learning the whole story about the events of July 1995, it is clear that the Bosnian Serb army did commit genocide. Perhaps the Serbs we spoke to did not share this opinion because of a deep nationalism and a duty to defend their country, or perhaps Serbia purposefully did not expose them to the truth of the events that occurred. When Serbia gets to tell the story, they make the atrocity seem less severe than it was, to push away some of the blame. Hassan’s main goal, however, was to share direct evidence of the genocide, including videos of the executions themselves and his own personal account. Once presented with this overwhelming evidence, it is almost impossible to argue that what happened in Srebrenica was anything but genocide.

When learning about history, we must take into account who is telling the story, and consider what parts of that story are being highlighted or forgotten. We must interpret all evidence for ourselves, and form our own sense of the meaning and significance of the past. 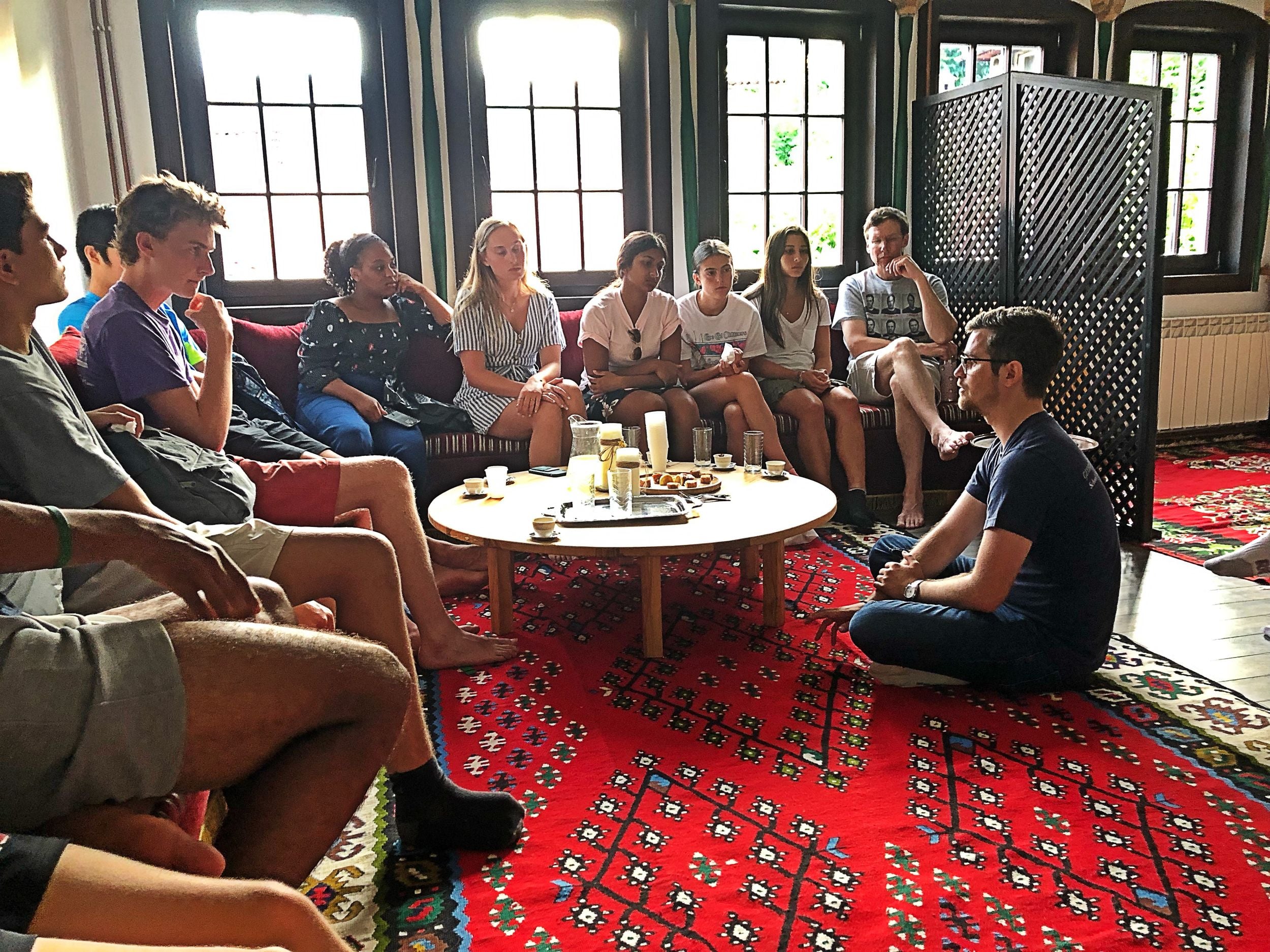 Contrary to yesterday, the schedule included a lot of driving today. Our lessons brought us south towards the Adriatic Sea, with a stop at Tito’s notorious secret bunker on the way. We continued our theme of dissecting differing perspectives with this chapter of our story in the hottest city in Europe, Mostar.

The day started early this morning when the group took an hour-long drive that led us from the elevated city of Sarajevo, 64 km to the southwest, to the mysterious small town of Konjic, Bosnia. Although most slept on the way there, the scenic drive through the Dinaric Alps showcased snowy mountaintops and the beautiful clearwater Neretva river. After three days in the crowded city of Sarajevo that has a population of over 438,000, the group was surprised when our phones read “No Service” in rural Konjic. What could a town that had seemingly nothing to do with war on the surface add to our greater understanding of the Balkans? Well, we soon found out when we went through a secret door in a small house that led to former Yugoslavian president Josip Tito’s 4.6 billion dollar atomic bunker.

After hearing countless people from the region attest to Tito’s greatness, this is the first time we experienced the negative side of Tito. Construction of the bunker, done in complete secrecy, started in 1953, and didn’t finish until 1979, just one year before Tito died. This essentially means the bunker served no purpose. Additionally, Tito built an 8 billion dollar underground airport and an underground port that was never used. Although many of these purchases were funded by foreign governments such as the Americans, they were unnecessary and selfish. Tito’s fear of the Soviets initiated these rash purchases and he prioritized his safety over that of his people. It was interesting to hear someone criticize Tito, as he had been praised by nearly everyone we had spoken to for his charismatic leadership qualities and willingness to include the people in his successes. Hearing that he made a bunker for himself and not the people of Yugoslavia portrayed a different story of Tito than the one portrayed at his grave site and museum in Serbia. There, we learned that Tito shared the personal gifts he received from world leaders with the people of Yugoslavia in public displays. Today, exemplified yet again, that it is important to gather multiple perspectives before formulating an opinion.

After leaving the bunker, we had lunch in the mountains with a beautiful water-front view. We had Bosnian lamb, and after the meal we watched the process in which the lamb was slowly cooked and rotated. Continuing to move south and lower in elevation, we eventually arrived in blazing hot Mostar, known as the hottest city in Europe. The Bosnian city features a huge Catholic church, which immediately raised questions for our group. We expected a city full of mosques and Islam, but the huge cross on the mountain and Catholic church told a different story. We later learned during our tour that prior to the conflict of the 1990’s, the city was majority Muslim. But, through ethnic cleansing by Bosnian Croats during the war, Mostar is a divided city now with Croats living west of the old city and its famous Ottoman-era bridge, which Bosnian Croats destroyed during the battle of Mostar, and which the city rebuilt in 2004. There is much to unpack in Mostar, and we will speak to a war survivor tomorrow. We will keep in mind the other perspectives we’ve accumulated so far, and put together our opinion on what we think happened and its significance. 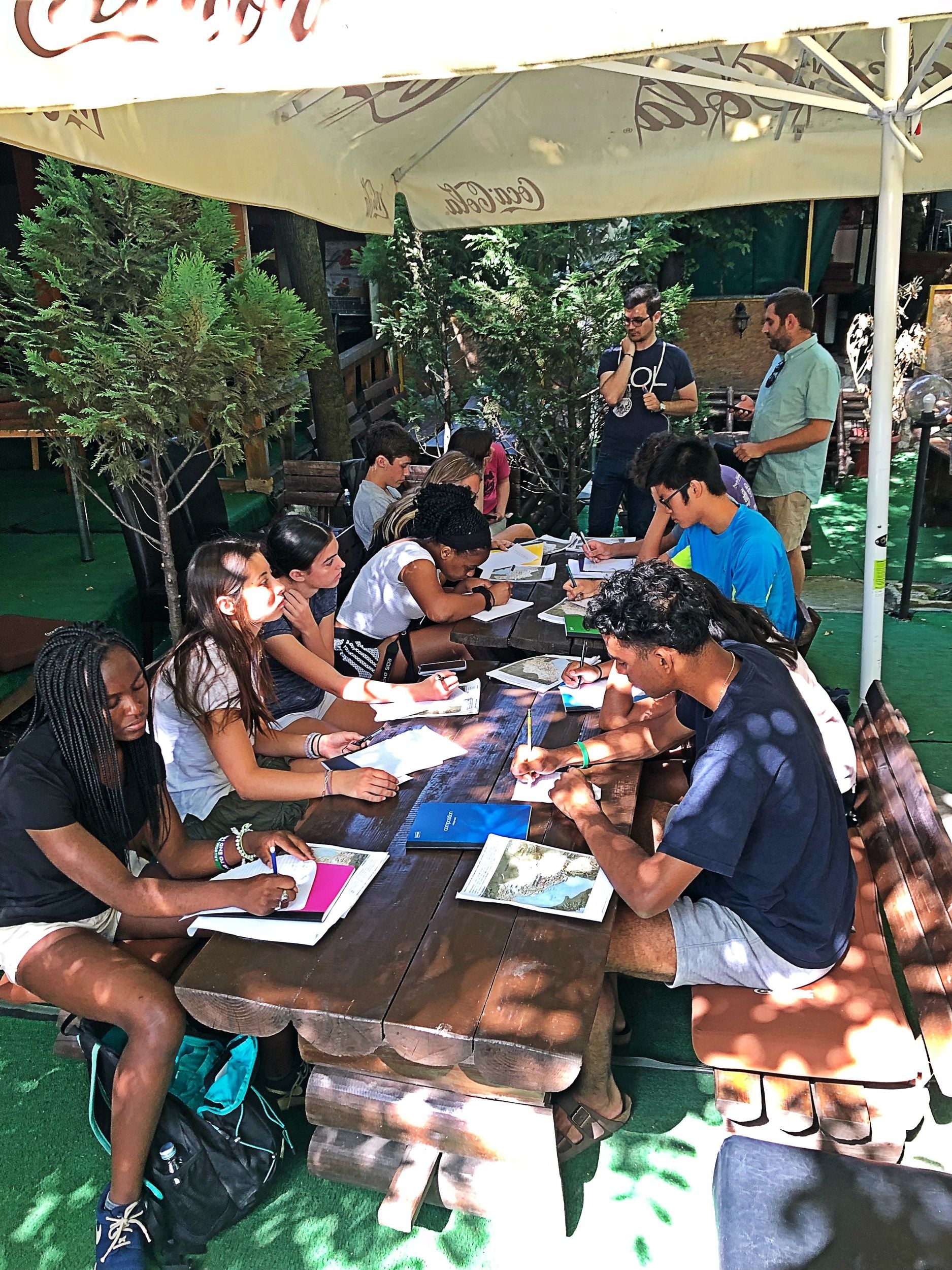 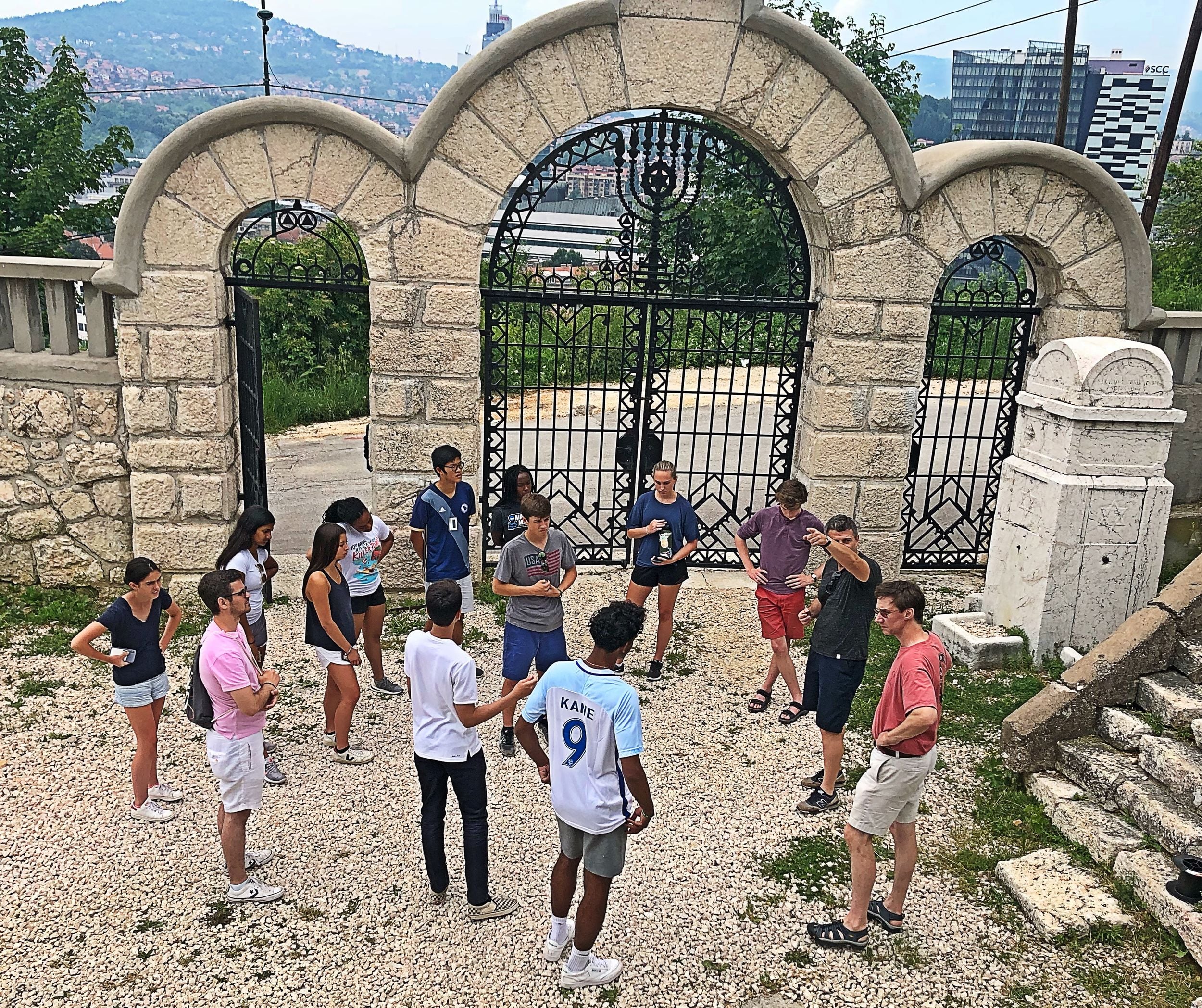 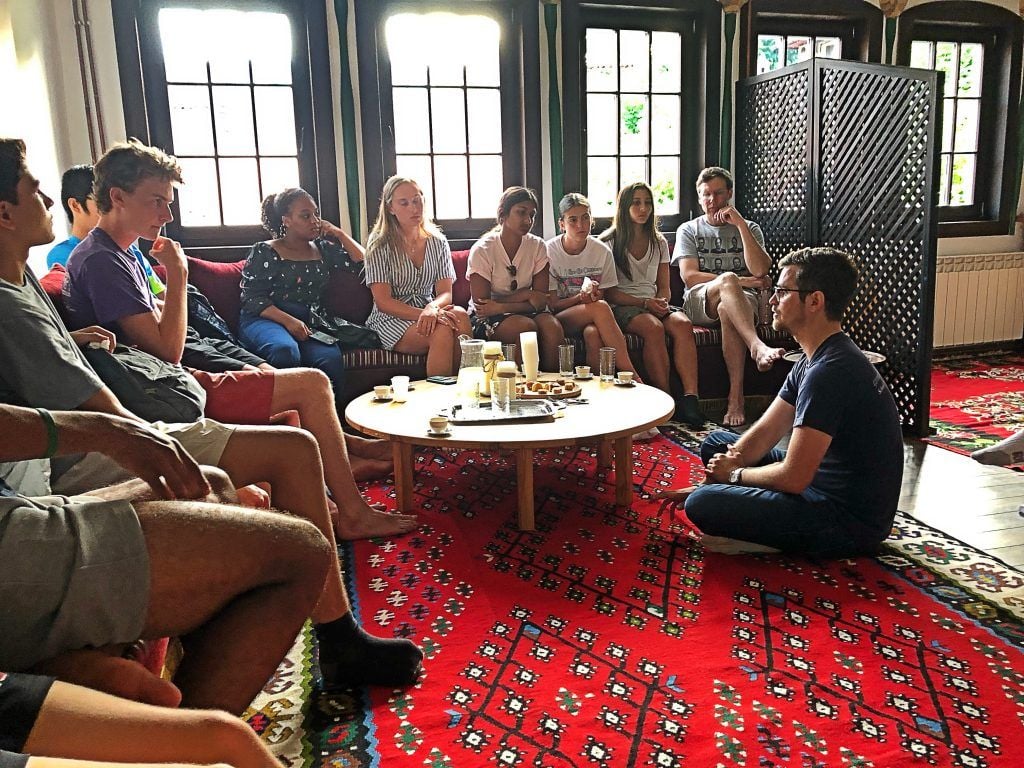