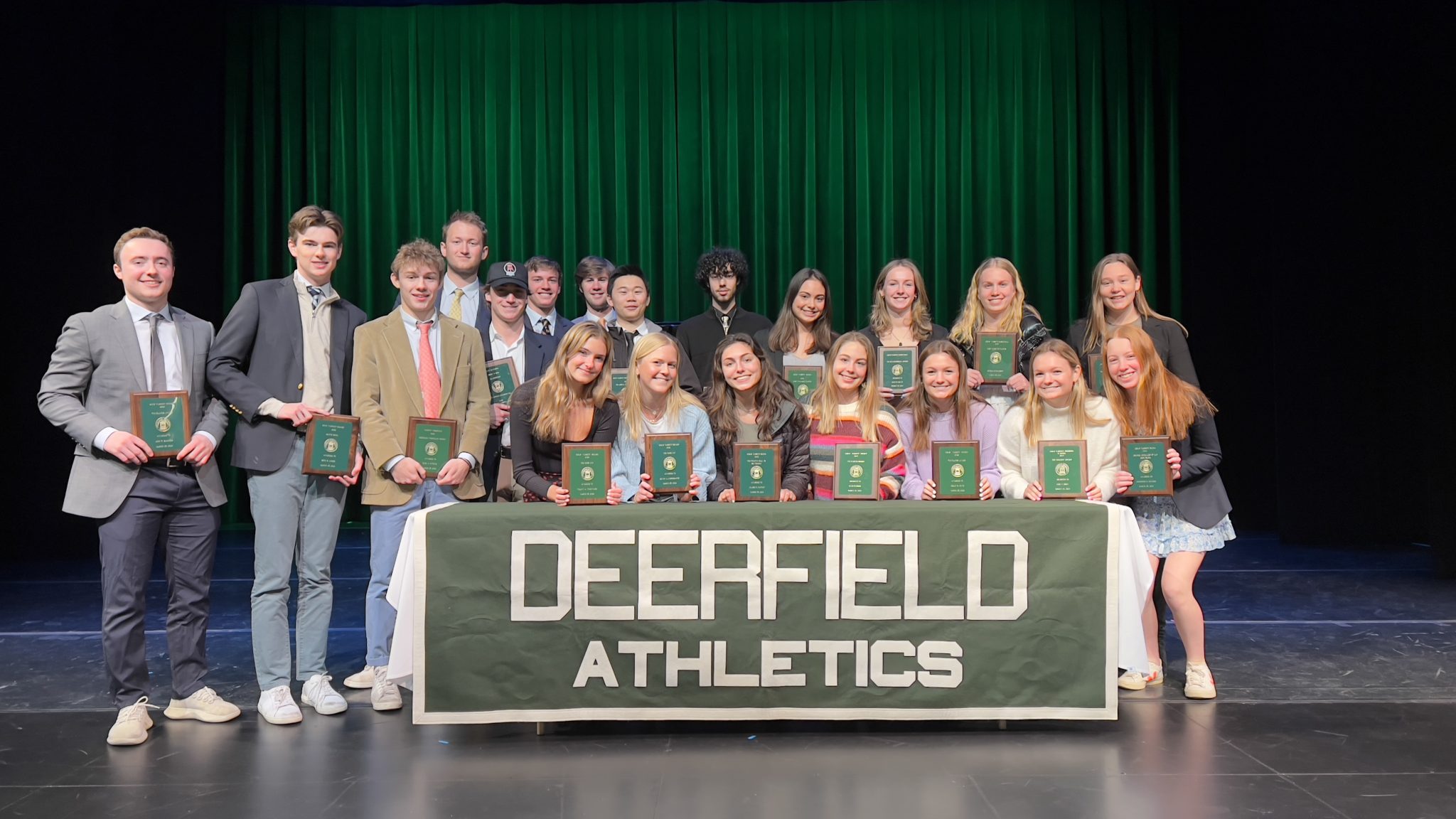 At today’s School Meeting, the community gathered for the first time of the spring 2022 term to recognize and celebrate the many achievements of our winter co-curriculars.

To start School Meeting, Mrs. Hynds, the Visual & Performing Arts Department Chair, shared a summary of all the many accomplishments of the Visual and Performing Arts Department from the winter term. A few of things accomplishments included; the performance of the Nutcracker, students and alumni performing at Carnegie Hall, the student choreographed dance showcase, and the theatre performance of The Curious Incident of the Dog in the Night. Congratulations to all of the winter performers!

Dr. Austin was presented the 2021 Volleyball NEPSAC Championship trophy by Daphne Gavros ’22 and Sophia Burke ’23 presented the girls wrestling trophies from the 2021-2022 season.

We began our Winter season with great hope and momentum as we entered 2022, but within weeks would experience similar setbacks we feared from this lingering Pandemic Flu.

This caused great community strife, as we were met with uncertainty and dismay. January gave us challenges that shrunk our rosters and team cohesion would fray.

Once again BIG GREEN did the many things right, and collectively we again to put up a good fight! We had a great winter season while pushing adversity out of our sight.

#10 – There are folks that work here that never gave up on giving all of us their best again and again. The Health Center staff, led by Kate Rolland, did us all proud and they are most deserving to be counted here at ten. Bed pans, thermometers, coughs, sneezes and so much more…these Chen Center staffers were in the trenches – one could say they’re this winter’s most valuable Door?!

#9 – Who else stepped up big and gave us something to shout about and bring out some Big Green Pride? That person would be Sam Chutkow who came from nowhere to take a Division One Diving second place. Who knew he could dive? We thought he could only race! For this surprise he steps into number nine for his commitment to this place.

#8 – The girls III squash team was the only undefeated team this winter so they secure place number Eight. New to these coaching ranks Coach Hadley Westman showed she’s no featherweight as her team did dominate.

#7 – Taking spot number 7 are two more teams with fantastic seasons. Their combined records are 23-2-3 which gives me plenty of rewarding reasons. The boys J.V. hockey team and thirds boys squash team had seasons to be remembered of their own. A ton of good sportsmanship, team bonding, and school spirit was shown.

# 6 – With solid showings at the New England Championships our swimming and Diving teams served notice to all good things are to come. Seniors Cam Howe, Greer Anderson, Mark Cai, and Robert Amundson provided great leadership and then some. Both teams return rosters that will excite our parents and fans. Next season promises to be entertaining for those in the stands.

#5 – That was six, now here is spot number 5. It was the boy’s side of alpine skiing this year that kept our winning tradition alive! Tait and Alex led a confident bunch that would consistently resist succumbing to poor conditions or fatigue, while leading their team to a #2 in New England and a 1st in their League.

#4 – Boys squash steps into position #4 for their season which put their expectations to the test. A third at New England’s followed up with a 4th overall nationally makes their season definitely one of our best.

#3 – Next up at three – a fun fact about our teams and some of their scores. Its about our rivals from the south – that school that calls themselves Boars. So far this year we have found great success, a record of 36-13 and this is a wonderful thing. Too bad for them we get even better in the spring!

#2 – At the two-spot recognition must go to our two NEPSAC Tournament teams. Team work, overcoming adversity and positive team culture were their constant demonstrated themes. Girls hockey made it to the Large School finals for the first time ever; while girls basketball made their post-season bid for the second “real” season in a row. We’ve watched both teams compete and we’ve all seen how they grow.

And now we’ve come to that time when we announce who’s number one. Let’s pause for a second and thank all our teams for a winter of fun. Things could have been bad, no seasons – a repeat of last winter of worse. But 100 years of hockey, hosting New England tournaments, and wonderful weekend home games proved we would not lay down to the pandemic curse. I’m proud of you all and how you’ve answered the call.

#1 – Now let’s finish my list in a different kind of way. Can I ask Matt Hickey and Adeeva Alli to stand up and be recognized here today? Both athletes won recognition as New England Champions in their respective weight class. Making them among the best in the region, an accomplishment hard to surpass. At the National Tournament Adeeva received first place – not bad for someone who started the season by just checking out the wrestling workout space!

Wrestling is a program on the rise and had many other successes on the year. If you are looking for opportunity next winter I suggest you look here. Let’s have a great spring Deerfield and give everything our best. Focus on what you can do to make things better for the rest!

BASKETBALL – Girls
Most Improved Player – Georgia B. Sackrey
The Keller-Birrell Award – Kate M. Kelly
For that player who manifests the spirit of Robin Keller and Katie Birrell, Class of 1992. They led by example and played with intensity, courage, and passion.

HOCKEY – Boys
The Deerfield Hockey Cup – Max A. Abene
To that senior who in the opinion of the players and coaches contributed most to the spirit and excellence of Deerfield hockey.
The 7th Player Award – John P. Bloomer

SKIING – Girls
The Philip H. Ball Jr. Ski Trophy – Claire D. Patton
To that member of the Deerfield Ski Team who has a genuine concern for the ski program’s success and who has similarly shown a loyalty to the concept of team skiing.
Best Skier/Brooke Gonzales ‘97 Cup – Josephine d. Cramer

SKIING – Boys
The Doug Parker Jr. Trophy – Alexander R. Grosse
To that Deerfield Skier who has exemplified the qualities of Doug Parker, a skier who developed collegiate ability through his dedication to the sport, a dedication derived not for fame but rather from a personal search to find his maximum ability. To Doug Parker success did not necessarily mean good results; it meant skiing the best he could.
The J. Scott Kelnberger ’79 Most Valuable Skier Award – Tait M. Kline
Given to a member of the boys’ ski team who is the most valuable member of the team, whose unselfish competitiveness best exemplifies the winning spirit of the team while honoring Scott’s great spirit, love of Deerfield, and his inherent goodness towards people.

SWIMMING – Boys
Noel J. Stace Challenge Cup – Robert A. Amundson
To that senior who has come up through the swimming system who has demonstrated ability, leadership, improvement and devotion to the sport.
John A. Pigeon Award – Mark Q. Cai
To be given to that senior who in the opinion of the coaches is the outstanding swimmer on the basis of his contribution to the sport.

SQUASH – Boys
Bayne Bowl – Beck Ayres
In memory of Bruce Bayne ’44. To that player who exemplifies the qualities Bruce Bayne ’44 brought to the game of squash while at Deerfield.  His championship qualities of natural talent, sportsmanship, leadership and the will to be the best are what the game of squash is all about. The recipient of this award should be proud of and build on her accomplishments in squash and in life.

WRESTLING
Deerfield Academy Wrestling Trophy – Hugo J. Nutting & Matthew T. Hickey
Awarded to that member of the varsity wrestling team who in the opinion of the team and coaches was outstanding in leadership, sportsmanship, and ability.

Congratulations to all of the winter award winners and all winter co-curricular participants, coaches and supervisors! 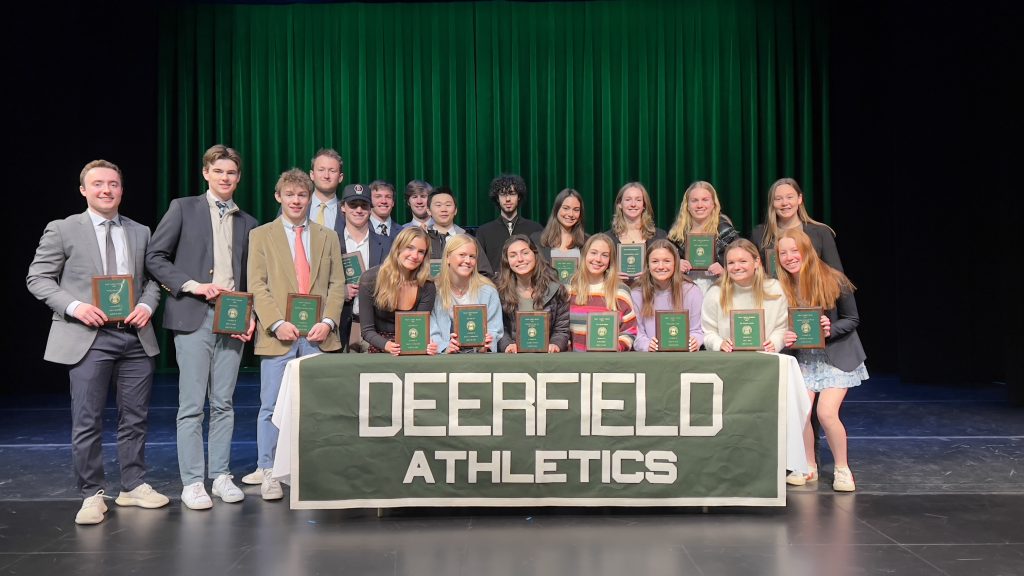