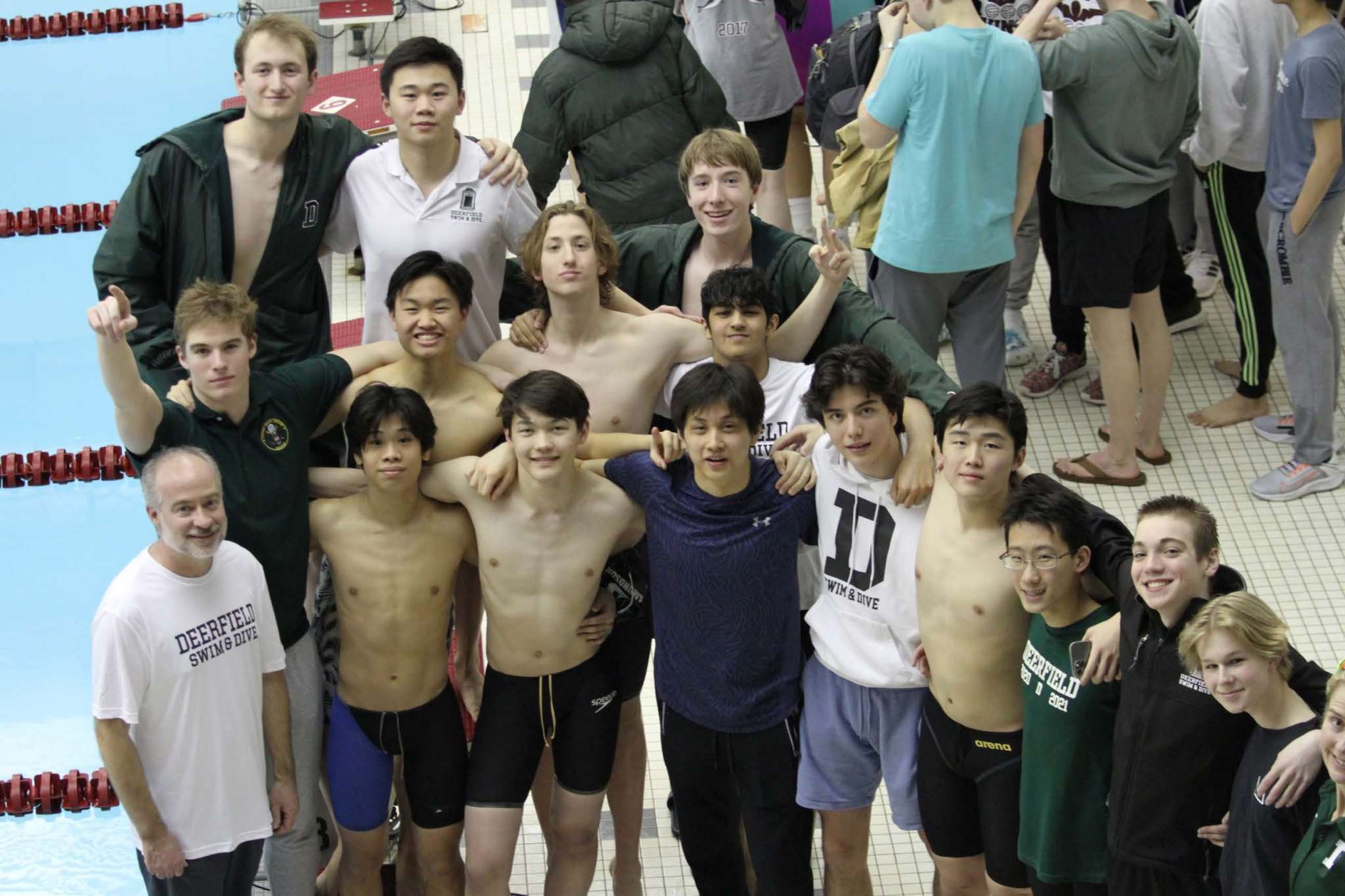 After having no live competition for the 2020-2021 season, this year we were excited to return to a more “normal” swim season.  With COVID, I guess you could say there is just a new normal – the old one is gone.  With the spread of COVID on campus in the month of January, we continually rotated through which third of the team was sick with COVID and were left swimming meets at half-strength.  What is amazing is that throughout all of those interruptions, the high level of strength and determination to carry on shown by the boys throughout the season.  A season that just ended with a sixth-place finish at the New England’s Championship meet.  For a team that for decades usually finished in the top 3, sixth place may not sound the best, but the individual and team accomplishments of this season cannot be undersold – and that placement speaks nothing to the quality of the swims and swimmers this season.   I could not be prouder of the team.  To coach this team has indeed been one of the highlights of my adult life.

The Championship started on Wednesday, March 2 with the diving championships hosted here at Deerfield.  When all was said and done Deerfield came out on top with the most points.  We can proudly say that we have three top 10 divers in the league! Toler Poole placed 9th, Forrest Gao placed 7th, and Sam Chutkow, a new post-graduate, placed 2nd with 355 points!  Sam last dove three years ago and for Toler and Forrest this was their first year of diving.  Our diving coach, Jason Cook, should be commended in his ability to train each diver to learn the sport and get them up to speed quickly.  Learning 11 different dives in one season for the championship meet is quite a feat! 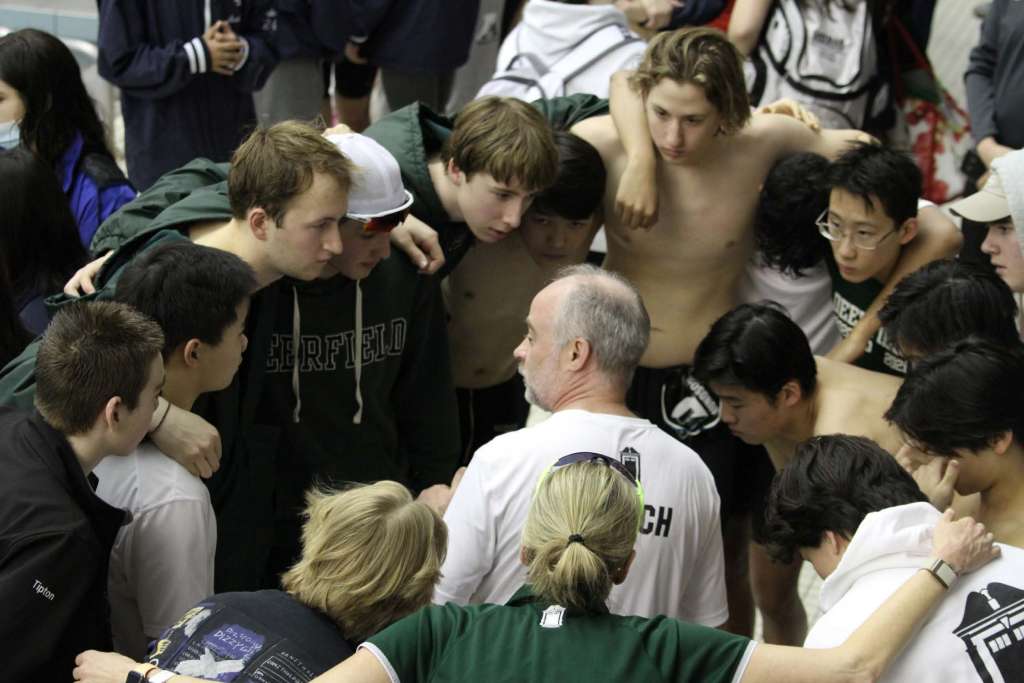 Hot off the spectacular diving results, the swimmers began the New England Championship preliminary swim competition on Saturday, March 5. On that day, the boys’ team had 30 swims by 17 different swimmers and achieved 30 personal best times for the season!  30 for 30…wow.  It’s a first, and simply a remarkable achievement.  On a team that fielded 20 swimmers for the meet, 17 of them had never been to our championship meet before.  To be standing on the pool deck watching season best swim after season best swim was simply put, exhilarating.  Some examples…In the 500 free the Amundson brothers (Robert 22’, captain, and Ryan 24’) both dropped over 10 seconds.  From the beginning of the season the time improvement was an outstanding 40 seconds for the boys!  Watching Robert make the ‘A’ (top heat) final on day 1 and Ryan break the 5:00 minute barrier on day 2 made me want to slap the pool water in celebration just as many swimmers do after they win a big race!  Not to be outdone by the Amundson boys, Ashish Sharma and Barron Celli, who also swam the 500, both dropped 10 and 20 seconds respectively from their seed times.  Alessandro Turchetta is a new junior to Deerfield who had not swum in the past three years.  His dedicated and strong work ethic in each practice this season paid off as he made first alternate for both of his events – the 200 IM and 100 Back, dropping over 10 seconds in each event during the season.  New first year student, Leon Kong – who had to overcome multiple illnesses this year – surprised himself by making the finals in both his 100 Fly and 200 IM events.  He would eventually garner 14th place in both.  Our other senior swimmer and captain, Mark Cai swam season best times in the 200 IM (2:02.52 seconds) and 100 Breast (59.58 seconds), placing 13th and 10th, respectively.

Swimming is a sport where every team member can make an impact.  It’s not just about the stars, but about every individual and how they can find ways to contribute (i.e. Forrest Gao agreeing to try diving after two years of swimming and taking 7th place!). There were great swims all around at the championship.  Totton Heffelfinger made both finals in the 50 free and 100 back, placing 4th in the league in that event.  Levi Tipton, a truly professional swimmer, placed 12th in the 200 IM and 11th in the 100 Back. The cadre of new sophomores – Will Hill, Daniel Wareham, HD Lee – were just a huge impact on the positivity of the season and the combined 5-2 record we obtained during the regular season.  At New England’s they contributed in the scoring of a combined 97 points out of the total 199 points Deerfield scored at the meet! 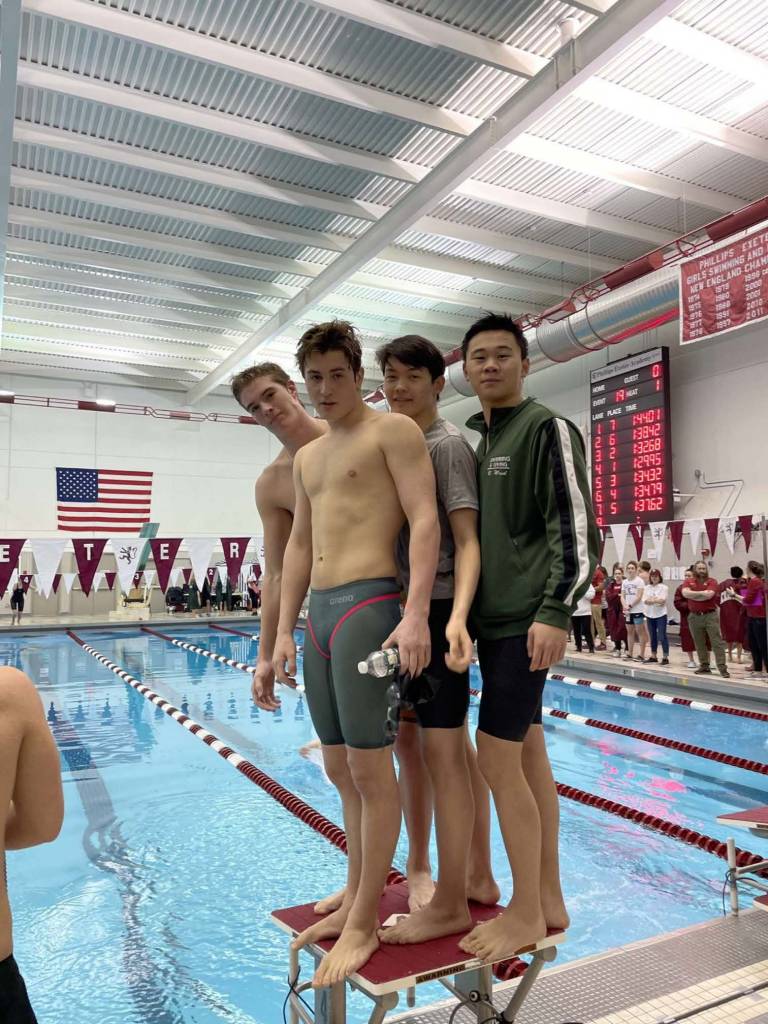 The season would not have been a success without the help of many people.  I’d like to thank Mike McCarthy and dining hall staff for the late meals, Audrey Armes for all the scheduling support, Bill Shea and Rui Santos for helping to keep the pool area looking great, and Bob Howe for all his support from beginning to end.  Additionally, in her first year with the swim team, Coach Onufrieff (“Coach O”) showed us all why she is so beloved on campus.  Her tireless work ethic, can-do attitude, and years of collegiate coaching expertise aided in the growth of our swimmers and simply made my job easier.  Jason Cook has been a great colleague coaching the divers, but also excellently running the pool/aquatics program throughout my whole nine years with the program and deserves much appreciation.  Our partnership with the girls’ team is also something that is a bit unusual in high school sports, and I am extremely thankful for Megan Washburn and Patricia Batchelor for making me a better coach by their comradeship and expertise.  Lastly, I want to send a special shout out to this years’ captains – Robert Amundson and Mark Cai.  For a young team – one that hadn’t competed in two years and were mostly unaware of any swim team traditions – the positive and supportive culture they were able to instill and create will be remembered for years to come.  Leadership is not necessarily an easy thing to do well.  As many publications state… good leaders are self-aware and encourage personal development, they demonstrate ethical behavior, and they promote positive and supportive actions.  There was probably no more important year than this one coming out of COVID where that kind of leadership was needed, and Mark and Robert stepped up.

Finally, in support of my sincere belief that swimming is a true team sport where every member contributes to the success of the program, I wanted to include the roster of this year’s varsity squad as a way to recognize and thank them all for their hard work, passion, and help in building a positive and family-like team culture.  It has been a great privilege to coach these 23 boys this year and I am beyond excited to see where we can take this program in the years to come.  As I told them at the end of our meet this weekend, “The future (of the program) is so bright, I gotta wear shades!” 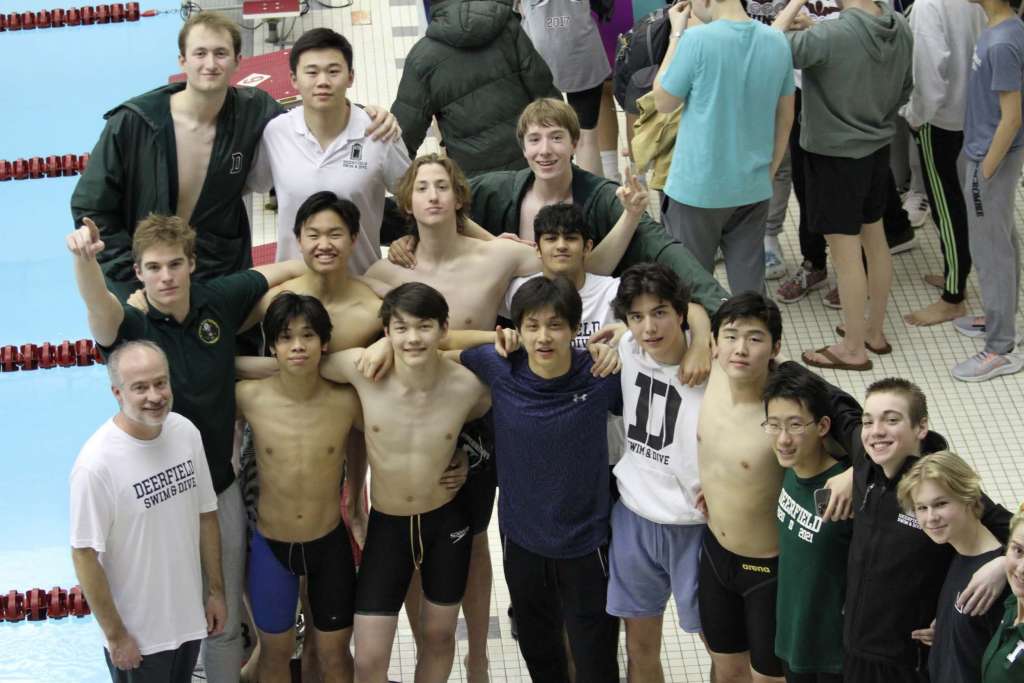