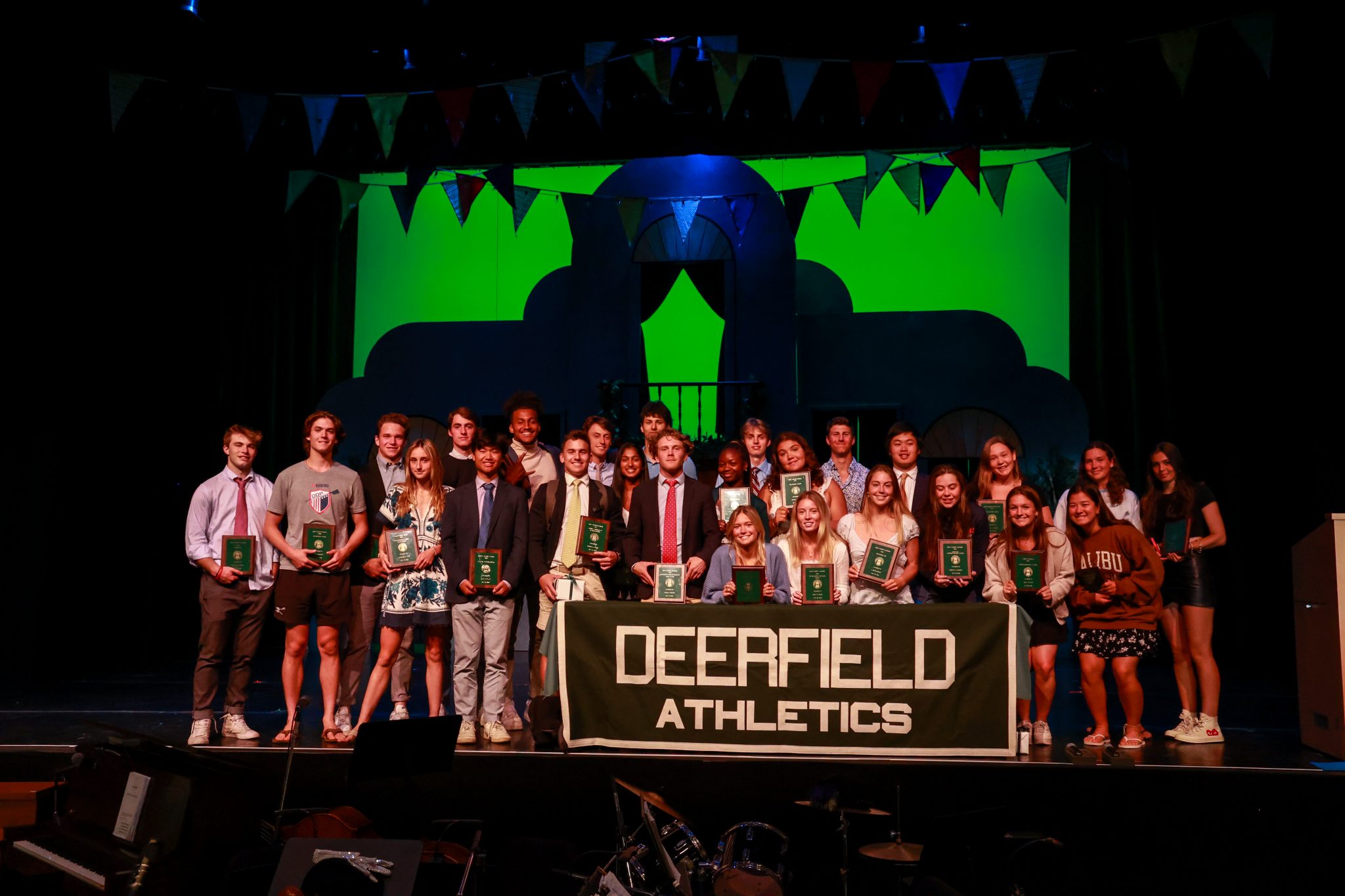 In the final Wednesday School Meeting of the 2021-2022 school year, the Deerfield community gathered to celebrate our spring co-curriculars and their many achievements.

Then, Mr. Howe announced the sub-varsity and varsity award winners for the spring 2022 season. Following, the senior athletic award recipients were announced and last but-not-least Mr. Howe’s Top-10 Poem was brought to life by several students through a the video that collectively made and finally stitched together by Gale Gai ’22.

To close out the School Meeting, Mrs. Hynds came to the stage to recognize all of the spring Performing Arts co-curriculars and the audience enjoyed a performance from students participating in the Performing Arts this spring.

What a great spring we’ve had – you all have had fun on the run. With bats, racquets, cleats, bikes and more I’m proud of how well you’ve all done.
Spring finally arrived and that long cold snap was through. Our teams finished strong led by the great class of 2022.

This Top Ten honors a handful of seniors who’ve contributed good spirit to this place. They’ve competed hard in their time here, have put team first, and have demonstrated exemplary grace.
Before we start this Spring’s Top Ten can we salute the extraordinary talents of our friend Gale Gai? He started something new in giving sports commentating a try.  Gale is so passionate about everything he looks to do and everything he takes on. It’s been such a pleasure watching him evolve as a broadcaster, and we’ll sure miss him when he’s gone.

Seniors rule the list as their big day draws near. We will miss this class, and on this I want it to be clear. Coming in at 10 are some athletes that may not make headlines, but make our teams complete. Players like Jack Chorske, Kiernan Keller, Katie Lawrence, and Lourdes Klem should all be considered for their team’s front seat.

Players like these 4, and there are so many more, are the glue and part of the reason we win. They are committed like no other when they arrive and our seasons begin.

Bobby Miele – Miele Ticket – you have great character. Your involvement on Deerfield’s teams this year has been one of the highlights of the year. You’ve given your teammates support while giving them all a reason to cheer. And another friend joining you at nine is Julia Hioe. When injured this senior didn’t disappear, but instead her role with softball grew!

As athletes there are few things we can do that mean more  than just good representation of our school. At this year’s NEPSUL Championships Ultimate won the Spirit of the Game Award – now that’s cool!

On the Ultimate field, no one marks like Abu, and for “skyying” opponents, there’s Jerry Yuan, too. But if SPIRIT is really why Ultimate’s great then Anna Pikarska earns spot number eight.

Coming in at seven we want to acknowledge all you seniors participating on our JV teams – it’s really quite a crew. You play for the love of team and now we’ll name a few: Cherewatti, Traversari, Viera, Hoff, Stengers, Fillion, Zaccheo, Zusi, Gurnell, Benello, Ito-Bagshaw and the entire JV golfing team! You stayed connected, led teams and you believe in our shared-experience theme!!!!!

At six the visual performing arts sneak onto the list once again because they are all just so good! Maddalena Honablue, Carson Belaire, and Hannah McKie lead the way for the spring’s VPAs – go see the play – you really should!! And don’t forget about Emily Feng, Yurok, and Gale Gai, whose performances will leave you looking for more. Art openings, recitals, concerts here at Deerfield are described as “top drawer”!!

The boys and girls lacrosse teams are two teams that always bring home lots of wins, and together they share the number 5 spot. The girls had a bounce – back season winning a lot while the boys flirted all season with a top – ten national ranking slot. In the end both teams met most of their goals and had highly successful seasons that made us all grin. We thank all you seniors that worked so hard for each win.

It’s the start of the third week in May and Mr. Howe has a crystal ball. He wants to make a prediction but won’t – due to risking it all. Boys and girls crew have been preparing for the NEIRA big race on May 28. They go in with a high seed and will row their very best to seal their own fate.

We don’t see them row or get to cheer them on as they try for the win. But we think many opponents are bracing for taking one on the chin. So best of luck to all my friends that row on this team. Finish strong at Worcester and like other DA boats before you – finish strong at the NEIRA race and never run out of steam.

Next up is baseball, a team that is Class A all the way. Under these coaches – a disciplined and positive team culture is here to stay. The league we now play in is arguably one of the best in New England you’ll see. To be in contention for the top spot here is reason enough to give them the nod at three. Thank you, Tynan and Geoffrey, for outstanding leadership giving this team that boost. And thankfully, we retain Ryan in keeping going that strong leadership roost.

At two we have two teams – each deserving of high praise. Girls tennis at 8-2 and golf stands at 14-1 – to both teams our glass we raise. What’s similar for both is that they graduate big players and acknowledging this will hurt – we simply cannot dodge. Isha, Daphne, Hunter and Kiki move on off girls’ tennis and for golf its Darling and Lodge.

All six have represented Deerfield so well and help with so many wins. Saying so long to these six feels like getting kicked in the shins.

And finally, the team, players and coaches we want to recognize in the top spot today. Our track teams get the nod for the records broken and athleticism on display. Its been quite some time since so many of our top athletes came out. So far sharing, caring, and going those extra miles you’ve brought an end to a championship drought. We couldn’t be prouder in the makeup of our teams. So many athletes from so many sports with different ages and backgrounds it seems. Talk about your shared experience for making good memories and dreams!

Another year has passed and Deerfield teams have had another banner year. To the class of 2022 – your coaches, teachers and athletic department members all wish you the best and we’ll keep these memories near. Keep coming back here as you move beyond the years of being a teen. You’ll always be welcomed back to the halls of the Big Green.

BASEBALL
Arthur S. Williams, Jr. Baseball Trophy  – Geoffrey Jamiel & Sam Chutkow
The Arthur S. Williams Baseball Trophy is awarded to that player on the Varsity Baseball team who, in the opinion of the coaches, has displayed competitive spirit and devotion to the game, and whose unselfish efforts on behalf of the team best exemplify those characteristics of Art Williams, coach of baseball at Deerfield from 1938-1970.

Reverend G. Richard McKelvey Spirit Award – Tynan Creagh
Established in honor and recognition of the Reverend G. Richard McKelvey’s 30-plus years of service to the Deerfield Academy baseball program, the annual Spirit Award is given to the player, manager or supporter of Deerfield Academy baseball who has demonstrated a special passion for, and dedication to, the game of baseball.

GOLF
The Jerry Daly ’72 Golf Award – Will Lodge
This award is given to an exceptional golfer who consistently demonstrated passion, commitment, dedication and sportsmanship to the game of golf.  Like Jerry Daly ’72, those named on this trophy displayed integrity, quiet confidence, embodied the true spirit of the game, and as a result had a significant impact on teammates.

BOYS LACROSSE
The Benjamin C. Haviland Trophy – Bryce Pang
Presented annually to that lacrosse player who, in the opinion of the coach, has by his constant striving contributed most to both the improvement of himself and of his team.

Rhodes Cup – Tait  Seeman & Cole Van Meter
To be given each year to that outstanding first year member of the Boys’ Varsity Lacrosse team who, in the opinion of the coaches, best displays the leadership, determination, and dedication of Andrew W. Rhodes.

GIRLS LACROSSE
Deerfield Girls Lacrosse Coaches’ Award – Morgan Giardina
Given annually to a member of the team who displays character and discipline both on and off the field and accepts any challenge put before her.

The Benjamin C. Haviland Trophy – Grace Honos
This bowl is presented in loving memory of Benjamin C. Haviland to that lacrosse player who, in the eyes of the coach, most clearly exemplifies the qualities which were outstanding in his life of dedication to the development of young women athletes.

The Ramsay Cup – Bliss Vernon
Given through the generosity of Roderick McKay Ramsay ’57, the Ramsay Cup is presented annually to the boy or girl varsity midfielder who excels in all facets of that most difficult position.

SOFTBALL
The Deerfield Softball Award – Kelly Howe
To the player who contributes most to the spirit of and success of the team over the course of the season.

The Holton Sayce Memorial Award – Joe Morsman
To that member of the Boys Varsity Tennis team, not necessarily the best player, through his sportsmanlike conduct on the tennis court and by the example set among his teammates, has most nearly exemplified the best that is Deerfield.

BOYS TRACK & FIELD
The Deerfield Academy Track Trophy – Elic Ayomanor
Is given annually to the Most Valuable track team member.

1983 Team Award – Elic Ayomanor
To that member of the Varsity or JV Track team who, in the opinion of his peers, contributed the most through his dedication to the team and by his encouragement to others.

The Jack Dolph Trophy – Quinn Hampson
Awarded at the discretion of the coaches on a year-to-year basis. Presented by Alumni for outstanding performance in distance running.

1983 Team Award – Ismay Anderson & Simi Lawal
To that member of the Varsity or JV Track team who, in the opinion of her peers, contributed the most through her dedication to the team and by her encouragement to others.

ULTIMATE FRISBEE
The Spirit of the Game Award – Jerry Huang

SENIOR AWARDS
Thomas Spater ’55 Award – Bobby Miele
This Award is presented to a senior participant in interscholastic athletics who through perseverance, team spirit and campus citizenship exemplifies the goals of interscholastic athletics and provides a role model for his/her teammates. The recipient can be an active non-varsity or varsity player, a manager, an injured player or anyone who has continued to contribute to the team through his/her perseverance, as well as interest in and dedication to the team concept.

Robert McDermott Award – Jeffrey Jamiel
To that senior athlete who, by hard work, determination, and loyalty to Deerfield, best exemplifies the qualities of Bob McDermott ‘73.

The William B. Jaffe Award – Kelly Howe
To the student who has exhibited courage, leadership, and sportsmanship on the athletic field.

Congratulations to this spring’s teams! 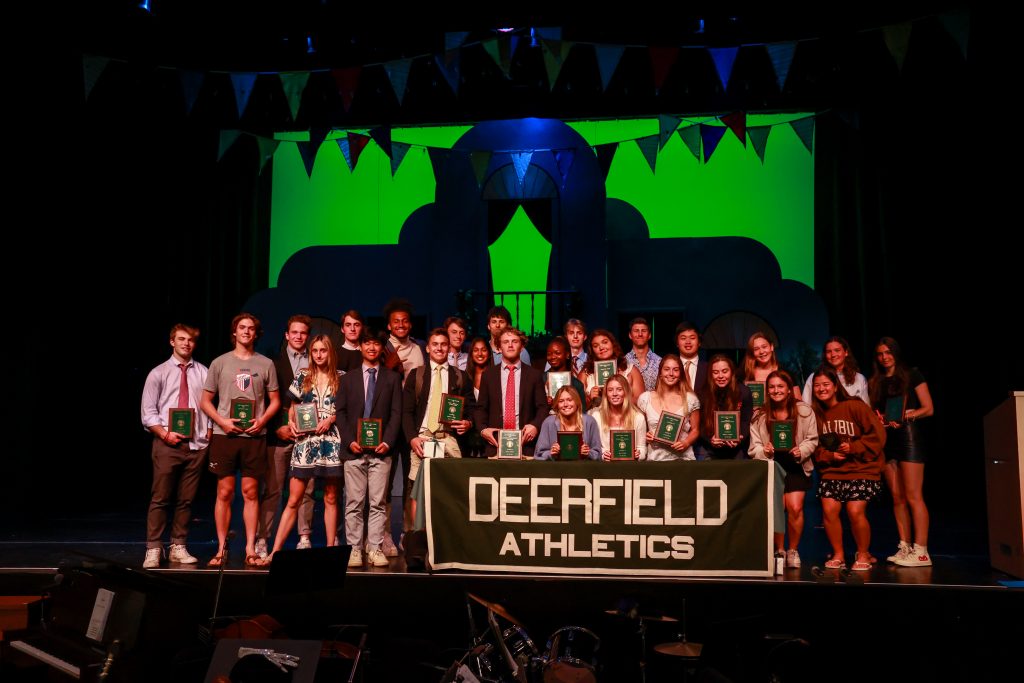