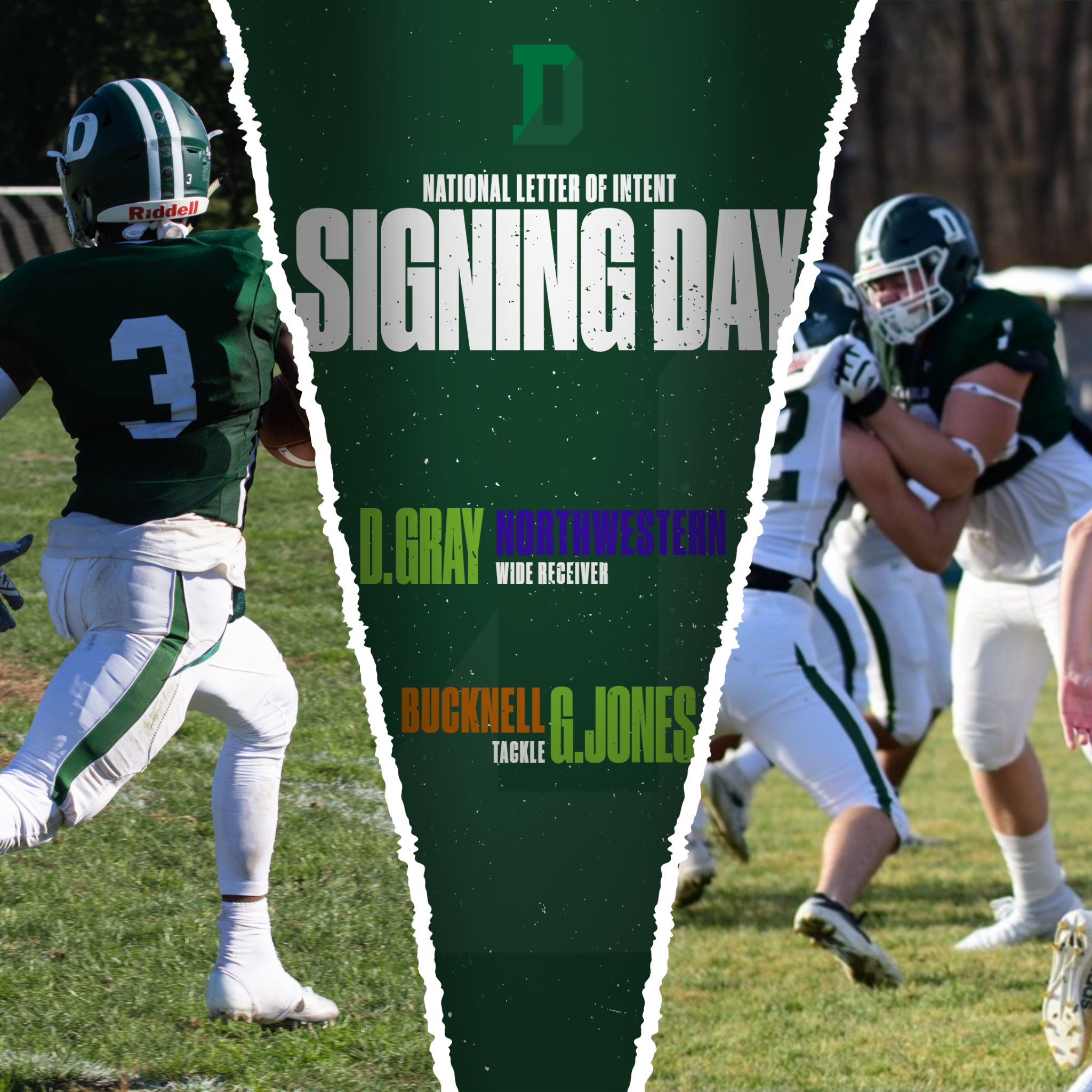 Today, December 16, 2020 marks a momentous day for two of Deerfield’s student-athletes – Donnie Gray ’21 and Grant Jones ’21 – as they signed their National Letters of Intent to continue the pursuit of their academic and football athletic endeavors at the collegiate level, specifically Northwestern University and Bucknell University, respectively.

Gathering virtually to celebrate their signings, athletic director Bob Howe welcomed the signees and the audience and offered his congratulations and words of wisdom to Donnie and Grant. In closing, Mr. Howe quoted, Jon Gordon, author of The Energy Bus, “No matter what happens today, remember…you might not be able to control all of your circumstances, but you can control how you respond to them. Pause, then look for the good. Trust in the bigger plan. Respond instead of react.”

Then, Donnie and Grant along with their families took turns inking their National Letters of Intent and donned big smiles! 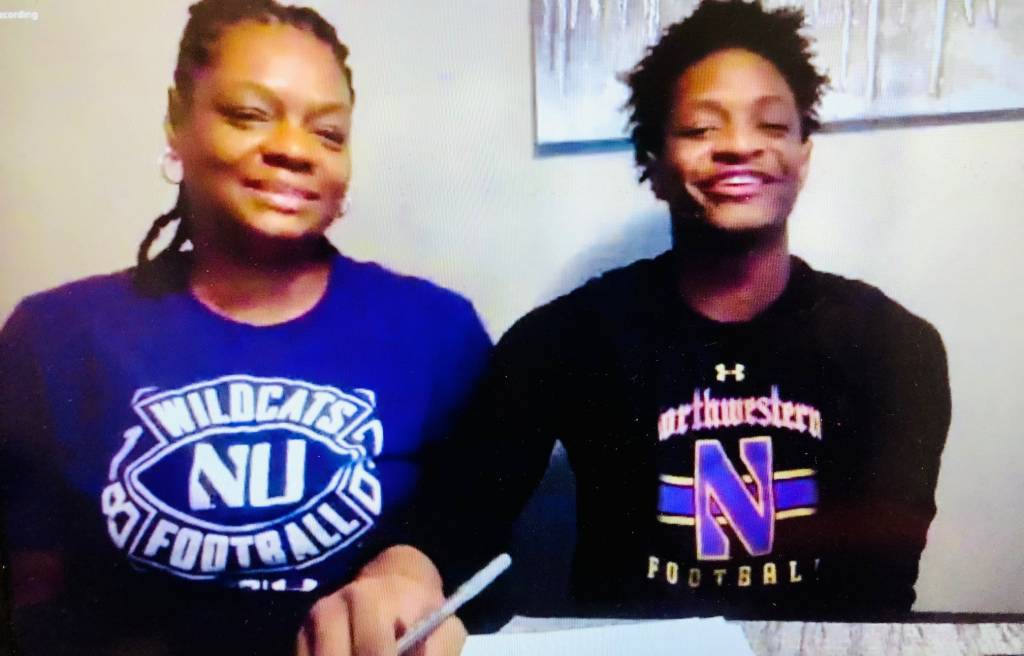 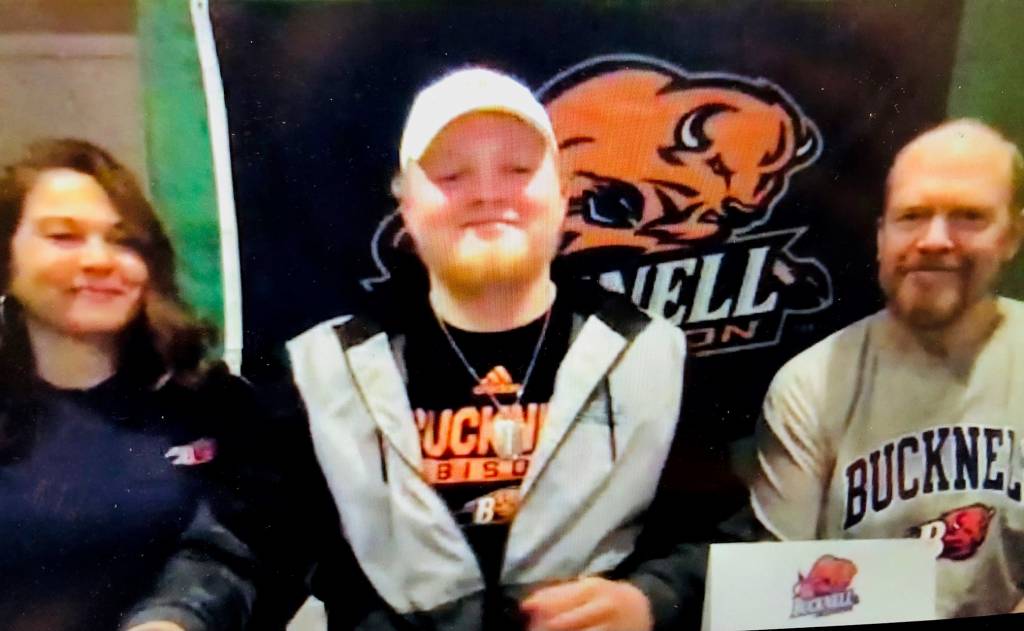 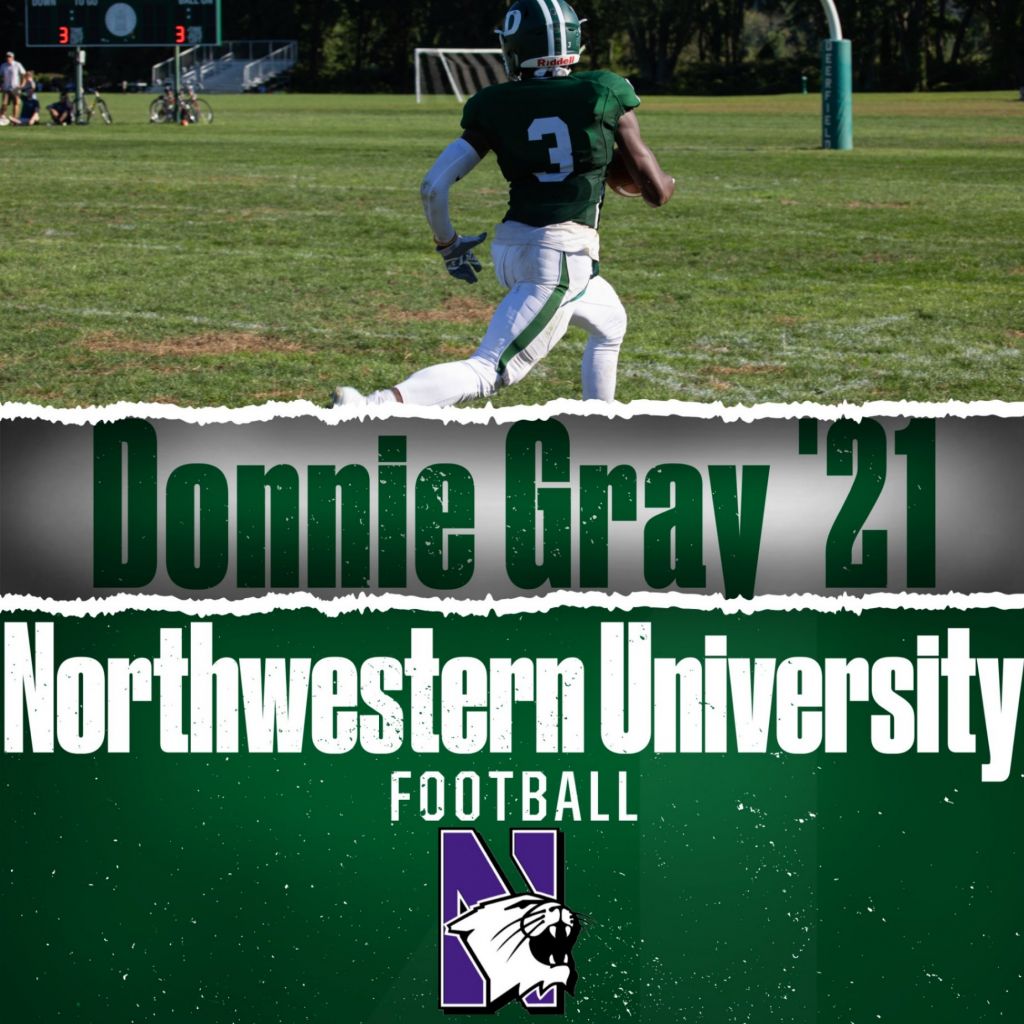 Donnie Gray ‘21 – Northwestern University (Football)
Donnie joined the Big Green in the fall of 2018 as a new tenth grader and made an immediate impact on the football field as a wide receiver and defensive back combination with his competitive drive and gifted speed. As a junior, Donnie helped pace the Big Green on both sides of the ball, amassing an 8-2 season record. The team’s two most notable wins came at the end of the season. First, defeating Choate 20-14 in the final regular season home game. Following this win, the Big Green defeated Milton Academy in the 2020 NEPSAC Mike Silipo Bowl game, 26-23 to capture the championship. For his efforts on the field in 2019, Donnie was named to the 2019 All-NEPSAC Honorable Mention team and was selected to the 2019  1st Team All-Central New England Football League team as a defensive back. As a senior, during an unusual season that did not include outside competition due to the COVID-19 pandemic, Donnie was a leader on and off the field, making big plays all fall and leading the team in interceptions. Next fall, Donnie will join the Northwestern University Wildcats. At this point in their 2020 season, the Wildcats have a 6-1 record and are slated to play Ohio State in the Big Ten Championship Game on December 19, 2020. Head Football Coach Brian Barbato quoted, “Donnie is an extremely talented football player and a selfless teammate who has made a lasting impact on our football program and the Deerfield community.  He loves to compete everyday and only gets better as he plays against better competition. He will continue to demonstrate his tireless work ethic and strong character as he makes his mark on the Big Ten.  We are so proud of you, Donnie. Northwestern is signing a great one today!” Good luck Donnie! Go Wildcats! 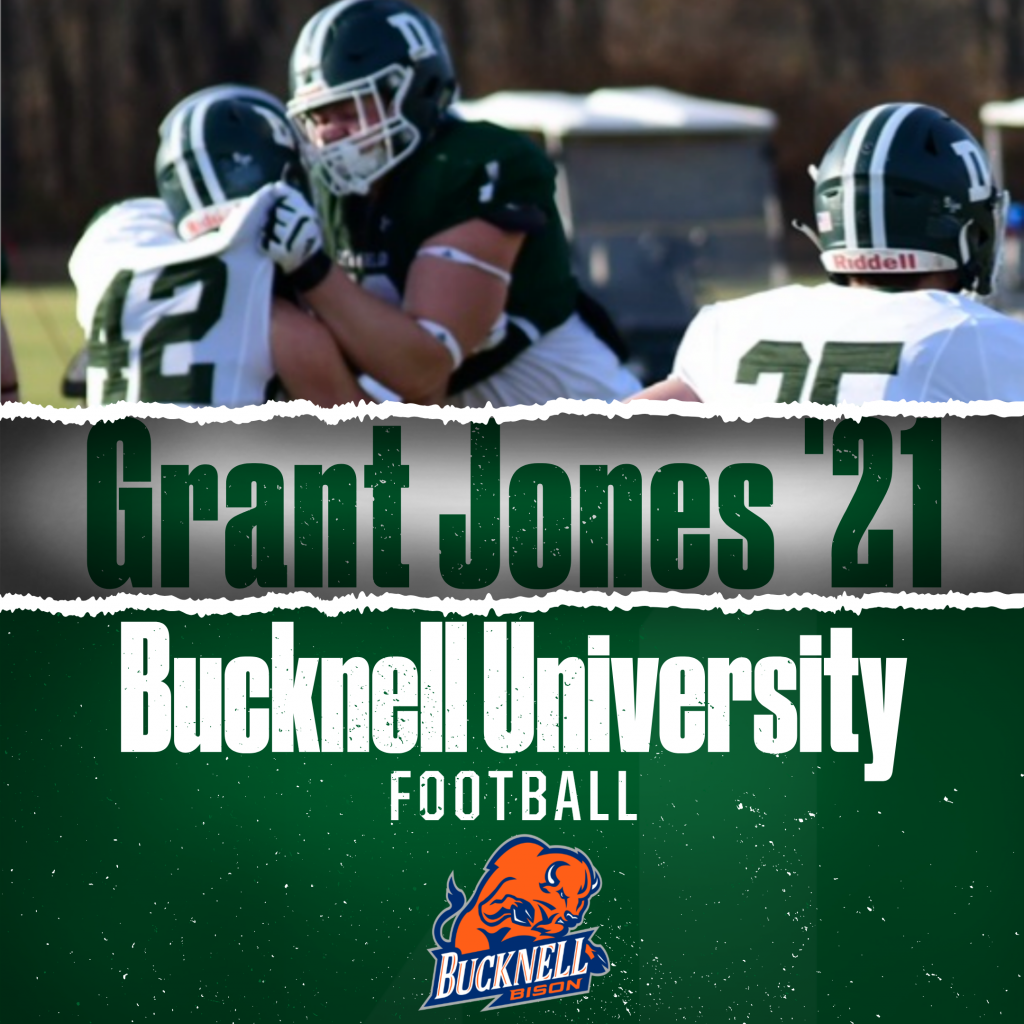 Grant Jones ‘21 – Bucknell University (Football)
A post-graduate  from Ridgefield, CT, Grant Jones has made an impact on the Big Green’s offensive and defensive lines during his lone  season with the Deerfield Doors. Prior to Deerfield, Grant played at Ridgefield High School in CT.  During his senior season at Ridgefield, Grant and the  Tigers posted an 8-3 season record , that included a 6-1 league record.  Playing on both the offensive and defensive lines at Ridgefield, Grant contributed to an offense that registered an average of 24 points per game. Although, football games were halted and gyms were closed during the COVID-19 pandemic, Grant continued to work hard during this time  investing day-in and day-out in his goal to play collegiate football.  Grant’s dedication and focus paid off! In the fall of 2021, Grant will join the Bucknell Bison in the Patriot League, where he will go head -to-head in League play against Big Green alumni at Colgate, Georgetown and Fordham. From Head Football Coach, Brian Barbato, “Grant made in immediate impact on our team and campus when he joined the Deerfield community this year.  Over the past 12 months he has grown in many ways and he will make an impact at the next level.  Grant possesses an amazing combination of size, flexibility and agility that will be the foundation of his success within the Bison football program.  I am so proud of his growth this year and I can’t wait to see his continued successes at the collegiate level.  Good luck Grant and congrats to Bucknell for signing a great one!” Congratulations Grant! Go Bison!

Congratulations Donnie & Grant! We are looking forward to continuing to cheer you on. 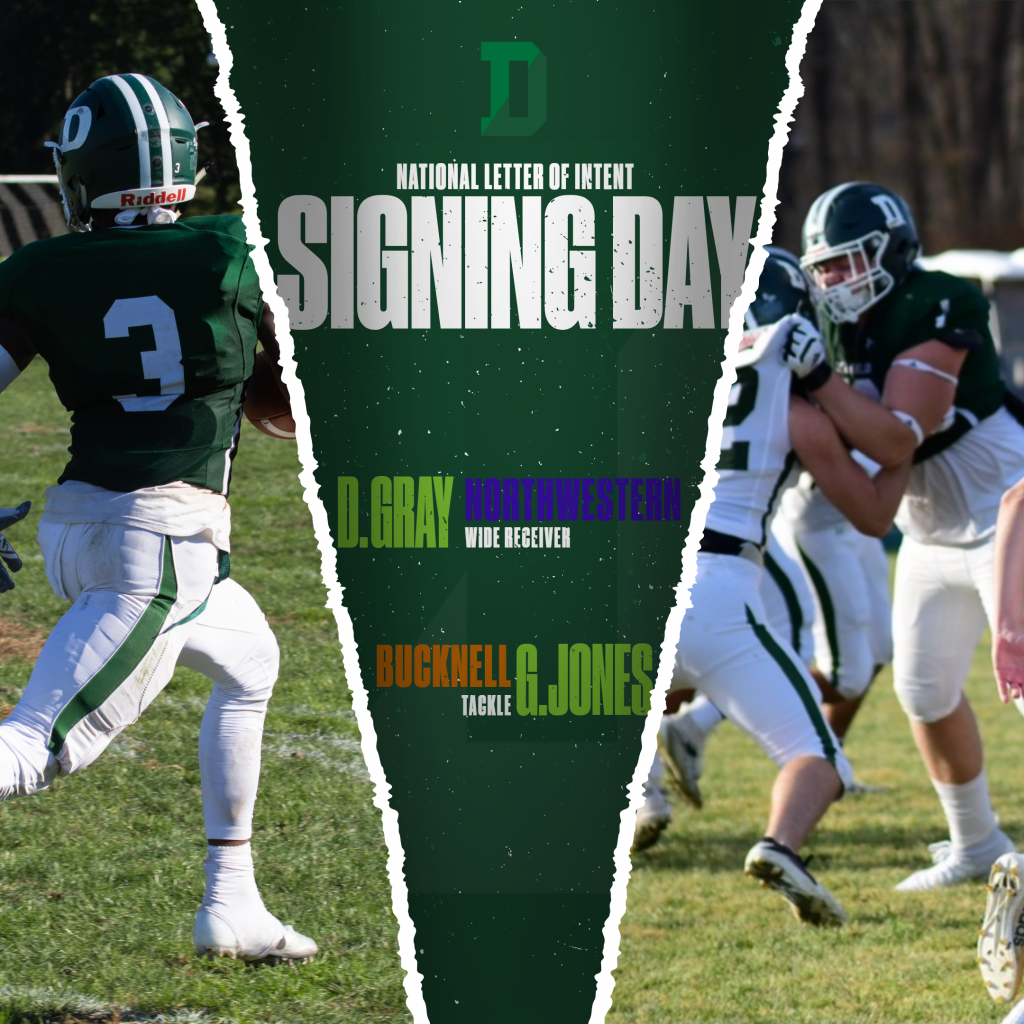