The Big Green prevailed through their three-game round robin schedule with a record of 2-1 to earn their spot in the championship game vs. Cushing Academy on Saturday (12/15). In the opening game on Thursday night the Doors defeated Worcester 5-1 and earned their second tournament win on Friday morning vs. Northwood, 4-1. On Friday night, the team fell to a talented New Hampton team, 1-3.

The championship game was a back-and-forth affair, with both teams creating chances in the offensive zone. The game remained scoreless until late in the third period when Caroline Skillman ’19 netted a goal off of assists from Ellia Chiang ‘21 and Lisa Ito-Bagshaw ’21. The Deerfield defense and goalie Liv Mikesell ’20 earned the final game shutout for the 1-0 win!

It is worth nothing that last year at the Watkins Tournament, Deerfield played Cushing for 7th place and this year the schools played each other for the title! A great display of each team’s growth. 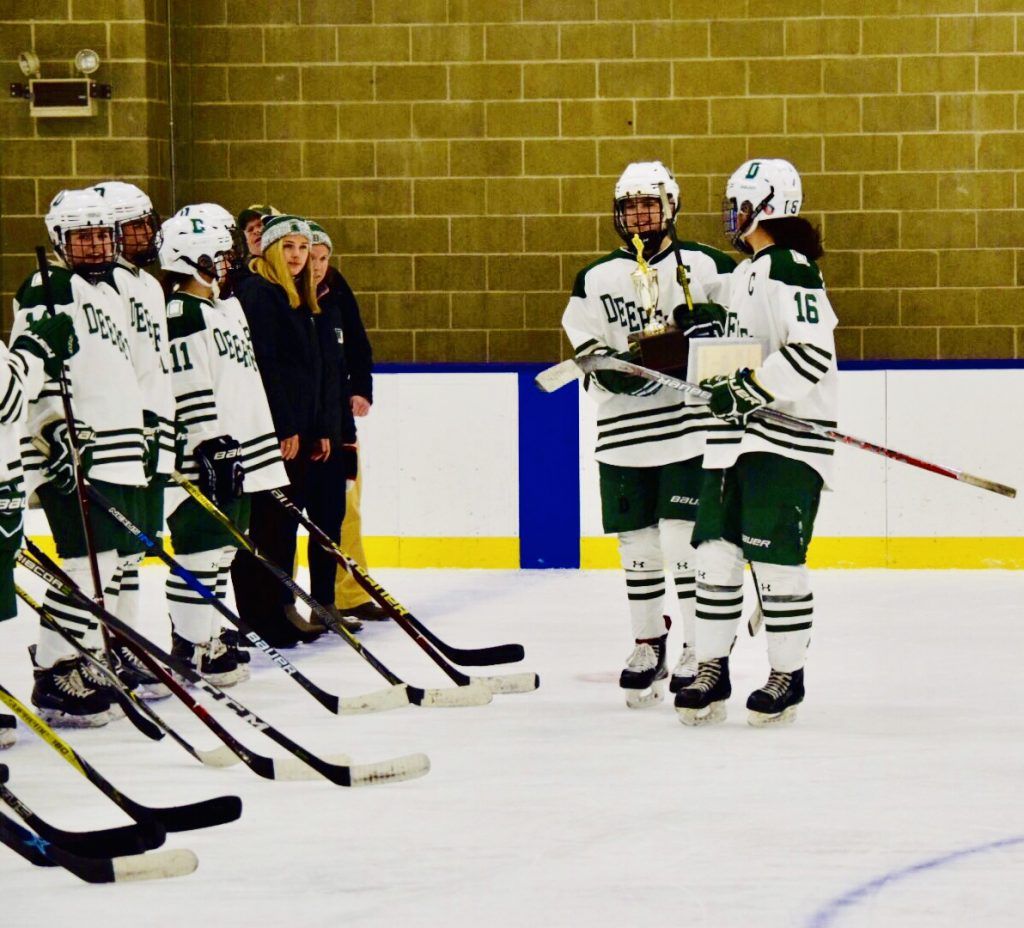 A big shout out to families and friends for supporting the team in the stands, with post-game food and drinks and for those who tuned in from a far to watch the championship on livestream. Thank you!

The Big Green closes out 2018 winning the championship and improving their early season record to 4-4-1. The girls varsity hockey team will look to carry this momentum into 2019, when they return to action on January 5th hosting the Hill School.

Deerfield girls varsity hockey played a complete game against Worcester Thursday evening, opening the Cushing tournament with a convincing 5-1 victory. Mary Edmonds ‘19 opened the scoring early in the first period by ripping a shot from the slot (Ellia Chiang ‘21 and Lisa Ito-Bagshaw earned the assists), and Mae Emerson doubled the lead off of passes from Ali Fujiyoshi ‘19 and Christina Halloran ‘20. Edmonds extended the Big Green lead in the second period (Halloran and Emerson with the assists), but Worcester got on the board early in the third period. Deerfield shut the door after that, however, with Edmonds completing the hat trick (assists to Halloran and Erin DeMarco ‘19), and Emerson notching her second goal of the game off of a beautiful shot from the slot (assists to Caroline Skillman ‘19 and Halloran). Jordan Manning ‘19 earned the win in goal with several key saves. Everyone played well in the game, and the coaches highlighted the play of Kailen Coelho ‘20 (best game of her Deerfield career), Sara Ito-Bagshaw ‘22 (strong and steady presence on defense) and Kelly Howe ‘22 (tenacious on the forecheck and smart decisions all over the ice). DeMarco earned the hard hat award for her positive leadership, excellent vision, and consistent hard work.

In the second game of the Cushing tournament, Deerfield earned a 4-1 win against Northwood. Mary Edmonds ‘19 ripped a beautiful shot to open the scoring (assists to the Howe sisters, Erin ‘20 and Kelly ‘22) in the first period, but Northwood tied the score in the second on a breakaway. Edmonds gave the team the lead once again (assists to Lisa Ito-Bagshaw ‘21 and Ellia Chiang ‘21), and completed the hat trick in the third (assist to Lisa). The final frame was the strongest of the game, as all three lines and 6 defense worked hard all over the ice and dictated the pace. Christina Halloran ‘20 rounded out the scoring (Mae Emerson ‘19 assist) after lots of good work down low by her line. Jordan Manning ‘19 earned the win in goal, and Sara Ito-Bagshaw ‘22 earned the hard hat for her intensity, toughness and positivity.

Deerfield lost a tough battle against New Hampton at the Cushing tournament. Tied 0-0 heading into the third period, New Hampton got the first goal of the game when we left a body open in the slot. The Big Green responded, however, when Mae Emerson ‘19 fired home a rebound from an Erin DeMarco ‘19 shot. New Hampton found the winner at the side of the side, and added an empty net goal as well. Liv Mikesell ‘20 was excellent in goal, and Kelly Howe ‘22 once again earned the hard hat for smart and tough play.

Deerfield took on Cushing in the championship game of the Watkins Invitational. Playing the team’s fifth game in four days, the squad knew that they would have to battle through tired legs against a scrappy team, and to their credit Cushing had the Big Green on their heels for much of the first period. The tide began to turn in the second frame, but Deerfield didn’t get on the scoreboard until the third period, when Caroline Skillman ‘19 scored off of assists from Ellia Chiang ‘21 and Lisa Ito-Bagshaw ‘21. The defense and goalie Liv Mikesell ‘20 made that score hold up, and the Big Green ended the weekend tournament champions! Mary Edmonds ‘19, Deirdre Mullowney ‘19 and Ali Fujiyoshi ‘19 were named to the all-tournament team, and Liv Mikesell ‘20 earned tournament MVP honors (and the hard hat for the finals). This team showed lots of grit and resilience this weekend, and we look forward to keeping the momentum going in 2019.