The Athletic Department is pleased and excited to congratulate our boys and girls varsity soccer players for being recognized by their respective leagues for their season efforts and team contributions.

Jacqueline an attacking center mid for the Big Green, was the team’s leading goal scorer on the and always found herself contributing to or creating the team’s attacking opportunities. 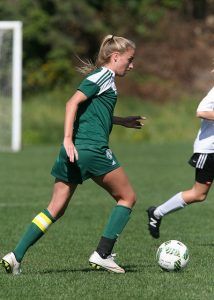 On the opposite end of the field, Felicia Renelus had a breakout season for the Big Green at the outside right back position. Felicia proved to be a ruthless 1v1 defender by stifling the opposition’s attack and helped to initiate her team’s transition to the attack.

For being distinguished as All-League players, both Jacqueline and Felicia were also recognized by being given the opportunity to play in the All-Star game last Sunday, November 13th at Loomis Chaffee School.

This year, league coaches voted in favor of adding a Junior All-Star game to the end of the season awards. From the Big Green, the league recognized Alli Norris ’17 and Maddie Wasson ’17.

Alli had a successful junior season in green, playing in a new defensive center midfielder position, she anchored the team’s attack and her tireless work rate on both sides of the ball both in games and training was an inspiration to her teammates and coaches.

In her first season for the Big Green, Maddie was a feisty forward with a nose for the goal and whose natural attacking instincts allowed her to combine with midfielders and forwards alike to create dangerous combination attacking opportunities for the Big Green.

Both Alli and Maddie have been invited to play in the NEPSAC Junior All-Star game this Sunday, November 20th at the Brooks School, the host site for the NEPSAC Girls Soccer Championships for Class A, B, C & D. 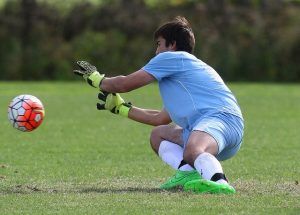 Tim is an outstanding shot-stopper who, time and again, foiled opposition attacks; his commitment in training inspired his teammates and his performance in games won the admiration of opponents, officials and fans alike.

An all-rounder at center-midfield, Angel, defended tenaciously, won balls through grit, skill and anticipation, and launched innumerable attacks by running at defenders and playing through to teammates.

Both Tim and Angel will compete in the NEPSAC All-Star game at Deerfield this Sunday, November 20th at 9:00am in the South Division fields.

Junior midfielder, Alex Platt ’18 was also recognized by NEPSAC as the Big Green’s Junior All-star.  Alex is an emerging talent in the middle of the field; able to win balls and play quickly on the ground; indomitable in the air; he will be a key player on next year’s team. Alex will compete this Sunday, 11/20 in the Junior All-Star game at Deerfield at 10:30am in the South Division fields.