The NCAA DI and DIII Women’s Lacrosse Championship brackets were announced on selection Sunday (5/6) and the qualified teams are now preparing for their first round tournament games, which get underway today.  Five Deerfield women’s lacrosse alumnae received bids into the tournament and will begin their quest for an NCAA Championship title this weekend. 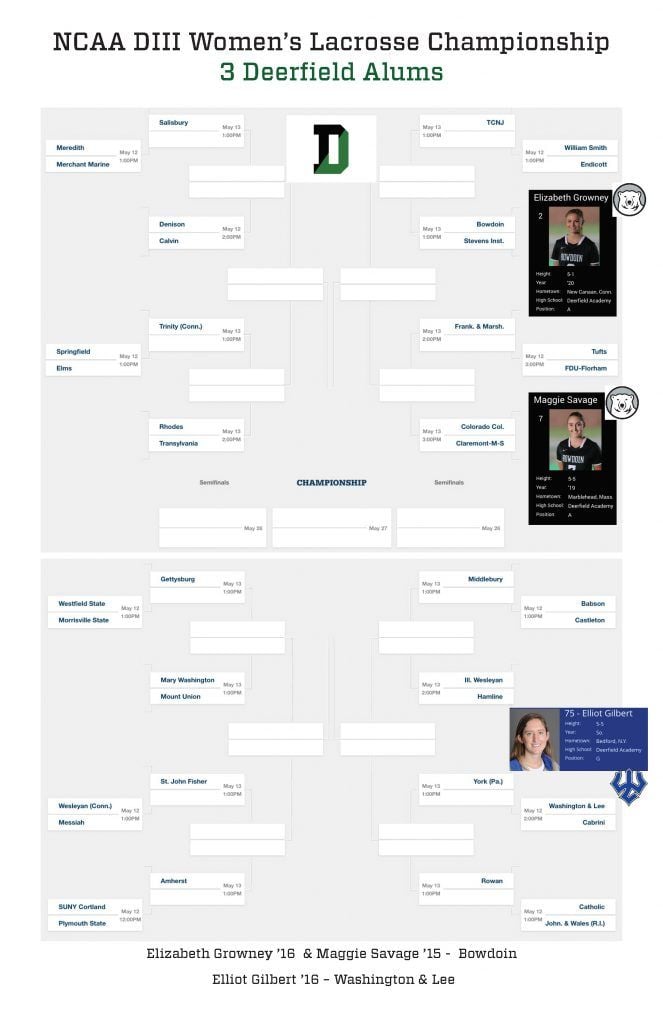 In the NCAA DIII tournament bracket, both Bowdoin and Washington & Lee earned bids.  The Polar Bears earned an at-large bid into the tournament after falling to Middlebury in the New England Small College Athletic Conference tournament championship.  Bowdoin and Middlebury are among six NESCAC teams who earned berths into the tournament.  Sophomore Elizabeth Growney ’16 and Junior Maggie Savage ’15 are both attack players for the Polar Bears.  This season, Growney has played in 16 games recording 13 points (11 goals, 2 assists).  Savage has also notched 13 points this season (11 goals, 2 assists) while contributing in 12 contests. This weekend the team will make their seventh overall NCAA DIII tournament appearance and will begin their 2018 quest to be national champions when they host Stevens in the second round on Sunday, May 13.

The Generals won the Old Dominion Athletic Conference tournament for the ninth consecutive year, totaling 19 overall crowns, and received automatic qualification into the tournament.  Sophomore goalie Elliot Gilbert ’16 returns to the NCAA tournament this season with last years’ experience under her belt. Gilbert has collected additional hardware this season; she was named to the ODAC All-Tournament team and has played in 14 games for the Generals this season.

All three Deerfield alumnae are on the same side of the tournament bracket, if all goes according to plan for the Polar Bears and Generals then, the semifinals slated for May 26 could be an all Big Green match-up. 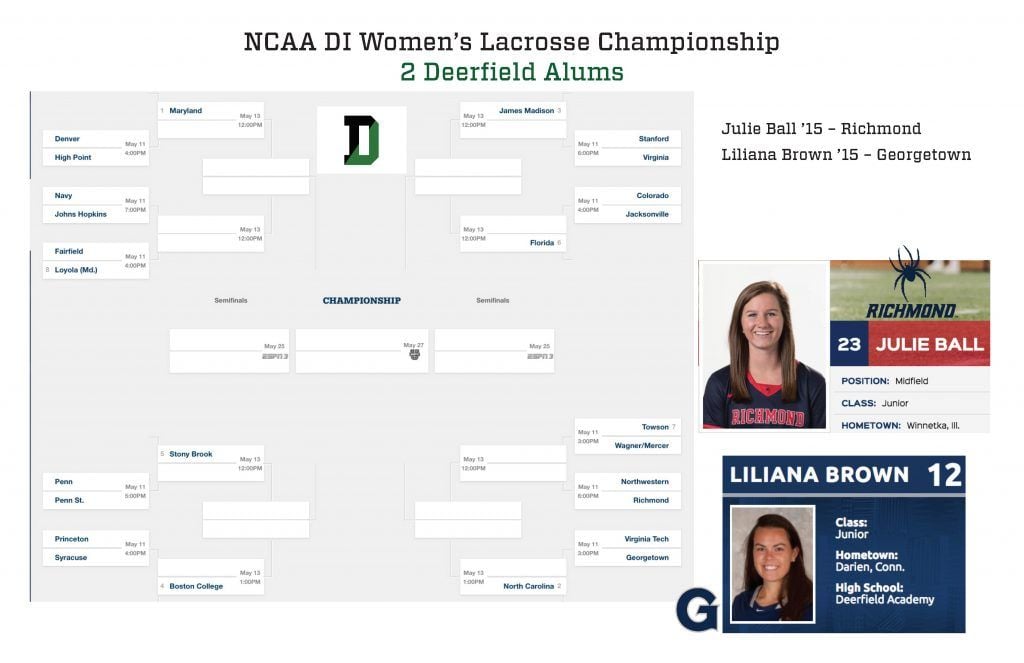 Julie Ball ’15 and the Richmond Spiders earned the automatic bid after capturing the A-10 tournament championship. This season, Ball the A-10 Defensive Player of the Year, led the Spider defense to a No. 3 national ranking in scoring defense (8.63). Currently, she ranks fifth nationally in caused turnovers per game (2.63). Ball caused 50 turnovers so far this season, already a Richmond single-season record. In her junior year campaign, Ball was named the A-10 Defensive Player of the Week three times. She collected 46 ground balls on the year, which ranks seventh in the conference. Ball helped the Spider defense post the fifth-best goals against average in the country, allowing only 8.62 goals per game.

Georgetown received one of 13 at-large bids into the women’s tournament.  This season the Hoyas posted a 12-6 overall record. Liliana Brown ’15 in her second season with the Hoyas after transferring from Bates College saw action in two games.  Georgetown is one of only two schools in DI to have both golf and both lacrosse teams in the NCAA tournament this spring.  Brown joins fellow Big Green alum and Georgetown men’s lacrosse player, Zeke Morrill ’15, in the NCAA tournament.

Richmond will face-off against Northwestern in first round action.  The game is set for tonight at 6pm. The Hoyas will travel south to play Virginia Tech today in the first round of the tournament.  The potential exists for Ball and Brown to face-off against each other in quarterfinal action.

Congratulations and good luck! We will be cheering you on from Albany Road!