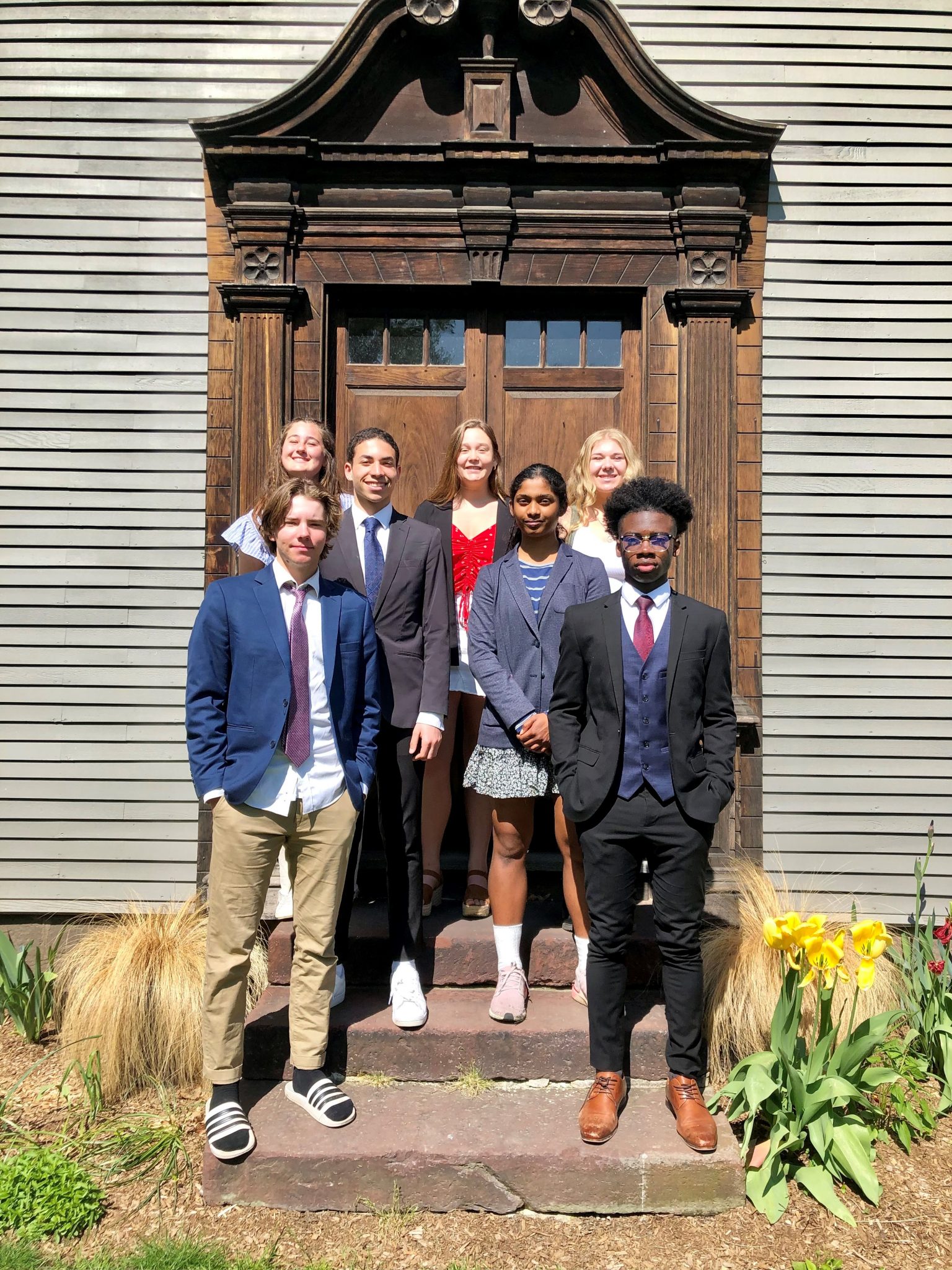 Varsity Baseball: Kiernan Keller ‘22
Varsity baseball is excited to select Kiernan Keller as our DOTW. On Saturday, Kiernan pitched 5 2/3 innings allowing only two runs, while striking out five, in a 6-4 extra inning league win at Exeter. Kiernan followed that up in his next start on Friday pitching a complete game, allowing two earned runs, striking out five, and walking two, in his 87 pitch masterpiece in a 4-2 league win at Cushing. Keep up the great work Kiernan!

Girls Varsity Tennis: Avery Brooker ‘24
Avery has been steadily improving and earning wins along the way since joining the tennis program this spring. Her upbeat attitude, sense of humor, and loyalty to the team elevate our group each week. Avery has earned shut-outs or near shut-outs at six singles for the last three matches!

Girls Varsity Lacrosse: Lourdes Klem ’22
The girls varsity lacrosse Door of the week is Lourdes Klem.  There is no other player more committed to the team’s mission or the development of chemistry than Lourdes.  Each and every day, Lourdes offers joyful, playful energy that raises the spirits of each of her teammates.  She creates fun in every drill, practice, bus ride, and film session.

Girls Varsity Water Polo: Darcy Del Real ’22 and Katie Lawrence ‘22
Despite having lost two seasons of full competition because of the pandemic, seniors Darcy Del Real and Katie Lawrence never wavered in their commitment to their polo teammates.  As co-captains this spring, Darcy and Katie have led by suiting their words to the action and their actions to their words, to paraphrase Hamlet. They’ve cheered their peers through easy wins and hard losses, always inspiring everyone to believe in better plays and days to come.

Girls JV Tennis: Nainika Lebaka
The JV Girls Tennis DOTW is Nainika Lebaka. Nainika had a standout week at both singles and doubles: she dominated 8-2 at #3 singles against NMH, and was even more unstoppable at #1 doubles against Loomis: she and Giorgia Santore didn’t miss a beat in their Bryan Brothers-esque coordination. Nainika leads by example each day at practice with blend of kindness, enthusiasm, and ruthless competitive instinct. She’s a player worth watching in the final four matches of the season!​

Boys Varsity Tennis: Max Peh
Max had a solid week of practice and match play, despite battling fatigue and illness early in the week.  Max found another level of play this week, securing much needed victories in our matchup vs Choate.  Max and his doubles partner, Ethan Li, secured a comfortable victory at #2 doubles and Max won in straight sets on court three.  Few players have been as reliable and steady throughout the year, and Max continued his approach despite difficult circumstances.

Girls Varsity Track & Field: Jenelvis Rodriguez
This athlete has continued to push herself during every track season. She is up for doing trying new events and has just entered the hurdles for the first time last meet. Her courage is contagious and inspires other athletes. This athlete keeps a positive attitude throughout practices and meets. She is ready to cheer on any athlete and  other athletes run over to join her. For these reasons and many more, our athlete of the week is Jenelvis Rodriguez.

Music Concentration: Austin Zhang ’25
The drummer is one of the most crucial members of any musical production. As the drummer for our spring musical Twelfth Night, Freshman Austin Zhang has tackled the herculean task of learning the 90-minute show with dedication and poise. The success of the show will be in large part thanks to Austin’s amazing efforts.

Boys JV Lacrosse: Penley Day ’24 and Adaugo Nwaokaro ’24
Our amazing managers have been an integral part of the JV Boys lacrosse team this spring. Both Penley and Adaugo contribute to our teams successes every practice and game. They weathered cold weather, wind and never miss a beat. We appreciate their efforts to make our team the best prepared, organized and supported that they can be!

Boys JV Tennis: Ashish Sharma
The DOTW for boys JV tennis is Ashish Sharma. Ashish stepped up this week and played in the #1 slot against Choate and always come to practice with a good attitude, ready to improve.

Varsity Softball: Ella Moriarty
New to our team this spring, Ella has made an impact as a 9th grader playing a varsity sport.  Ella gives her best effort each practice and game and is always up to support the team, whether that means starting a game or coming in strong out of the dugout.  We are so impressed with Ella’s positive attitude and cheery vibe — we can’t wait to watch her continue to grow in the coming years.

Theatre: Hannah Horner
This week we nominate Hannah Horner for door of the week. She is always early for rehearsal, warmed up and ready to dazzle the audience. She is the epitome of professionalism in her preparation and performance of any responsibility given to her. Hannah brings a respectful, responsive and positive energy to any rehearsal space. She is an asset to our Twelfth Night company and we can’t wait to see her onstage in a few weeks!

Boys Track & Field: Nick Peltekian ’22, Don Hutchinson ’23, and Ephraim Tutu ’24
The Door(s) of the Week for Track & Field this week are Nick Peltekian ’22, Don Hutchinson ’23, and Ephraim Tutu ’24. Each of these athletes competed in their ordinary events during recent track meets, giving their full effort to reap the benefits of their training in competition. Then, thinking their work done for the day, they instead were called upon to run a leg of the meet-concluding 4×400 Meter Relay, in order that the other athletes on the Relay teams could run their event. The spirit of giving a little more on behalf of one’s teammates is the embodiment of what the Track & Field program seeks to cultivate, and these athletes stepped up to show their true capacity when needed. In fact, each ran a new personal best for 400 Meters as reward for their effort.

Ultimate: Anna Pikarska ’22
The Ultimate Door of the Week is Anna Pikarska ’22.  Anna is fiercely committed to the team and its emphasis on “Spirit of the Game.”  She has had a lot to think about in these past months, and she had a particularly busy schedule this past Saturday, but she played 4 of 5 games in our NMH tournament before zipping back to campus to participate in TEDx.  Anna comes down to the field each day eager to work hard and improve her already impressive skills.  She finds a strong sense of community in her team, and she contributes to that positive dynamic in innumerable ways.  Oh, yeah–did we mention her great goal in the Hartsbrook game?? 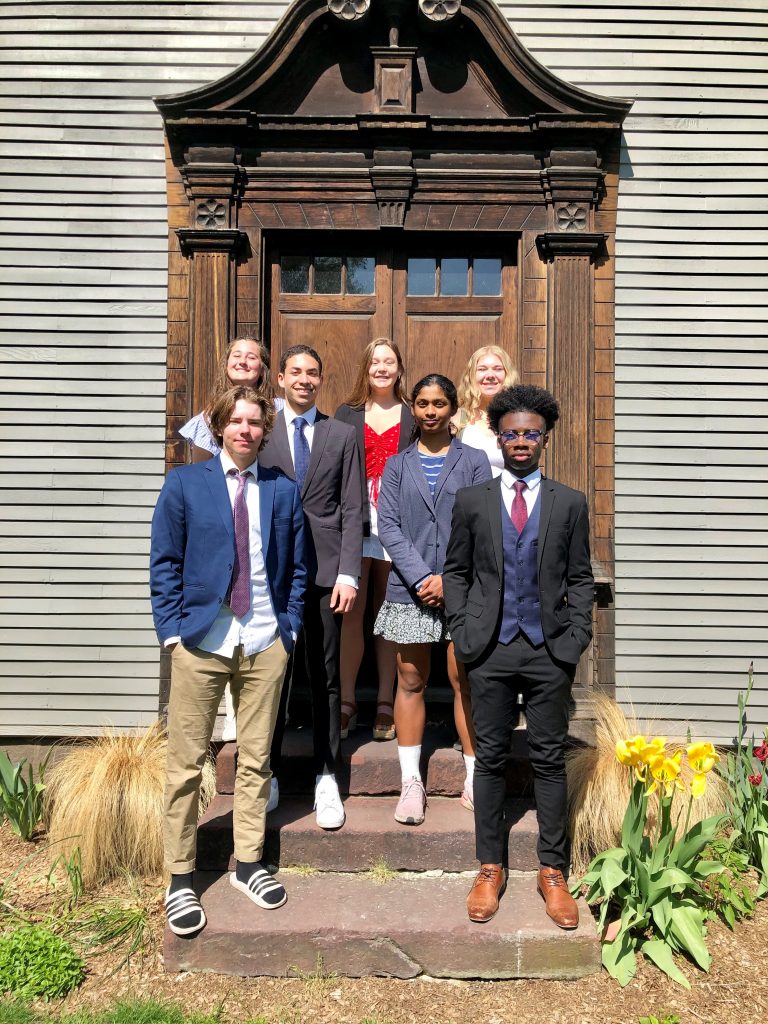