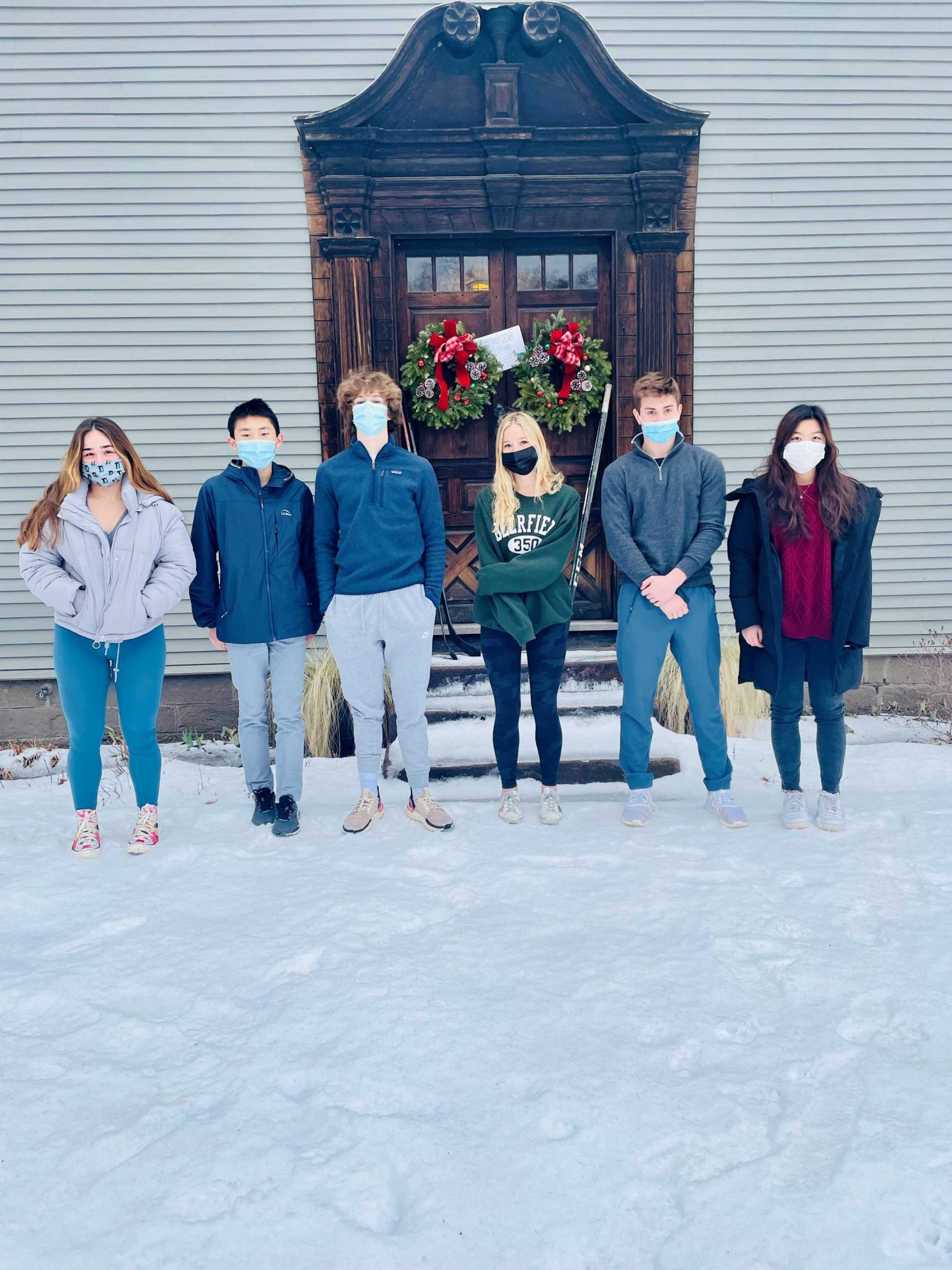 Rec Hockey: Eve Andon ‘23
The rec hockey door of the week is Eve Andon ’23. Eve brings a smile and a great attitude to every practice. She dangles around her teammates in scrimmages and has a blast. We love having her on the rec squad and look forward to more stellar play throughout the season.

Boys JV Squash: Sam Parker ’23
Sam has been a strong co-captain all season, leading by quiet example and even temperament. He recently challenged to bottom player on Varsity and won, earning him a spot on that team for the near future. His excellent low drives and soft hands bring a dynamic combination of power and touch, which led him to domination over his recent opponent from Berkshire. I am very proud of Sam’s hard work, competitive spirit, and maturity as a team leader.

Boys JV Hockey: Bake Donnellan ’25
Blake score his first two goals of his season on Saturday against Andover helping his team to a 4-1 victory. Blake’s work ethic and team first attitude deserves recognition. His game improves every day and he is a great teammate to every person on this year’s team!

Girls Thirds Squash: Claire Kepner ’25
The DOTW for Girls Thirds Squash is Claire Kepner. Claire is new to the sport, and she she has improved quickly throughout the season because of her determination, speed, finesse, and competitive drive. ​​Her work on Saturday exemplifies her tenacity: after losing the first set of her match to Andover 2-11, Claire made some strategic adjustments. She began pummeling her opponent’s backhand while also adding more depth and power to her serves and shots. She cruised through the next three sets and won them handily. Her crafty and flexible approach helped secure the team’s emphatic 10-0 shut-out. Claire is an exciting player to watch as the season continues!

Girls JV Squash: Zeyna Ilahi ’22
This week’s DoTW for Girls JV Squash goes to Zeyna Ilahi, our #1 on the ladder.  When Varsity lost a few players on Saturday the 15th, Zeyna stepped in to play number 7 and won her match against her Choate opponent.  She capitalized on the opportunity given to her and worked hard on Friday and Saturday to earn her victory.  Congratulations, Zeyna!

Boys Varsity Swimming & Diving: Will Hill ’24
Will is a new sophomore to Deerfield and has quickly made a positive impact on the team.  Not only is he a great teammate who likes to have fun, but also he works hard in every practice and is defining himself as a very capable sprinter in the league.  Last week the team had two away meets – against Suffield and Exeter.  Will swam a personal best time in the 100 Free (50.91 seconds) against Suffield and gave each race his all even when he may not have felt like he was swimming at top form.   We are pleased to name him this week’s Door of the Week and are excited to watch him continue to grow and impact the program as the season progresses.  Congrats, Will!

Girls Varsity Squash: Devon L’Esperance ’22
Devon has had an exceptional start to the season and beat each of her first four opponents of the season without dropping a game.  More importantly, she has been a leader in reestablishing a culture of hard work and good tunes out on the squash courts every afternoon!  Devon is an excellent captain and she leads by example in all aspects of her game, gritting through injury and never letting her teammates down.  Devon is a deserving Door of the Week for the team and she will continue to bring home hard-fought victories in the weeks ahead!

Girls Varsity Swimming & Diving: Olivia Smit ’25 & Sunny Nie ’23
Olivia Smit: Mia Senturk chose Olivia Smit to be our door of the week.  Mia presented the award to her teammate with the following summary, “I really admire this swimmer because she works hard every day and her efforts are always consistent.  She’s always cheering her teammates on and working had on every set we do. She brings a great, positive energy to practice every day which is why we all love her!”
Sunny Nie: Olivia Smit chose Sunny Nie to be our door off the week.  Olivia presented the award to her teammate with the following summary, “I am giving this award to someone who has been really helping me and cheering me on at every meet. And even though she is recovering from an injury she shows up every day and she’s been working hard to get back into swimming and she’s doing so great.  I admire all of her hard work!”

JV Swimming: Max Wang ’25
JV swimming is pleased to nominate Max Wang as a DOTW.  Max’s work-ethic in practice is unmatched.  He leads his lane with enthusiasm and determination, thoughtfully engaging every practice with his best efforts.  Max also eagerly joined the Boys Varsity team for his first Deerfield meet ever last week to fill in when the team’s numbers were down.  He effectively swam the grueling 500 free, scoring his first varsity point, and joined 3 relay teams to wrap up a challenging first meet.  Max is a vital new member of the JV squad and we look forward to his successful season.

Boys Thirds Basketball: Isaac Bakare ‘24
Our DOTW is Isaac Bakare ’24. In our last game against Suffield, Isaac made one of the most athletic and incredible plays of the season. A Suffield player had a breakaway layup at a point in the game where the outcome wasn’t in doubt. As he slowed down and prepared for an easy, unopposed layout, Isaac charged all the way down the court and blocked the shot – without fouling. He could have easily just let the play happen, given that the opposing player was so far ahead and the score didn’t matter, but he made a great hustle play. We appreciate his great effort and heart!

Girls Varsity Basketball: Savannah Gibb’s ‘22
This week’s athlete is Savannah Gibb’s ‘22. New to Deerfield this year, Savannah immediately sparked our team’s play—her solid fundamentals, basketball IQ, determination, and hard work are always apparent. Offensively, she has been one of our team’s top scorers in every game, as both a guard and a post player. Defensively, she has consistently been paired up with our opponent’s toughest players and has helped to shut down our opponent’s offenses. It has been a pleasure to watch her grow as a player this season.

Wrestling: Matt Hickey ‘22
The Varsity Wrestling Door of the Week is Matt Hickey ’22. As the only post-graduate in the Kravis this winter, Matt has enthusiastically embraced the role of mentor and assistant to the coaches. He brings experience, proficiency, and calm confidence to the room; he always exhibits a sense of purpose and a passion for the sport; he consistently inspires our younger wrestlers. On more than one occasion, Matt has led part of practice and—more importantly—the team has followed. He’s an essential part of the culture this season. We’re thrilled to have him in the wrestling family! 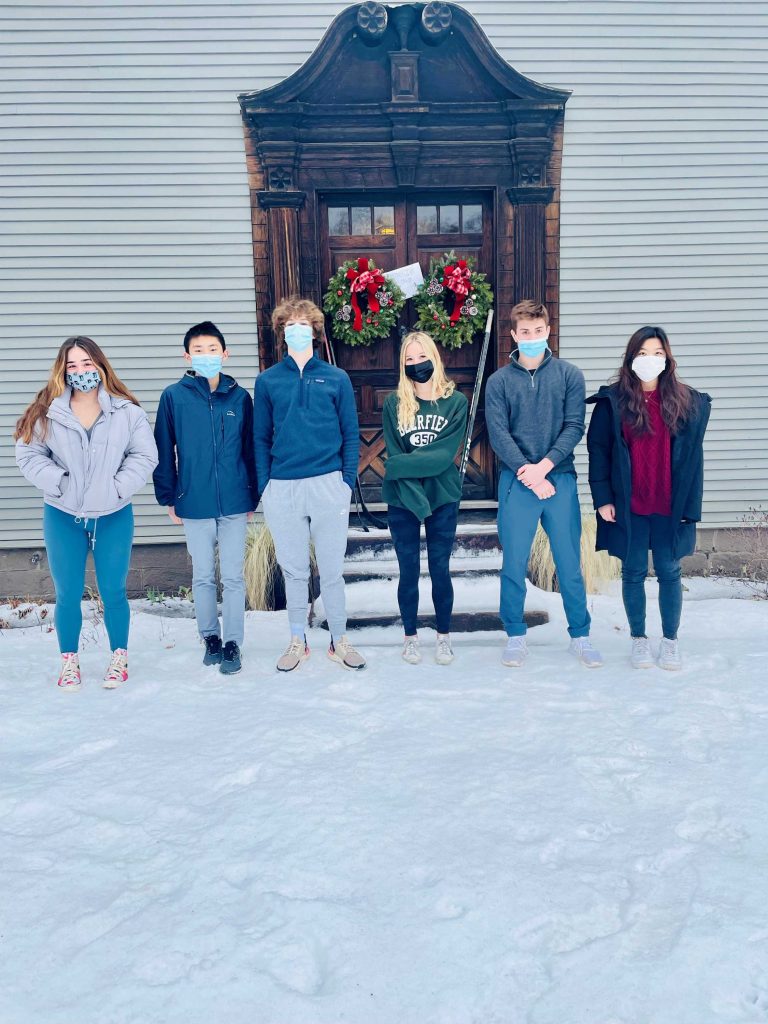