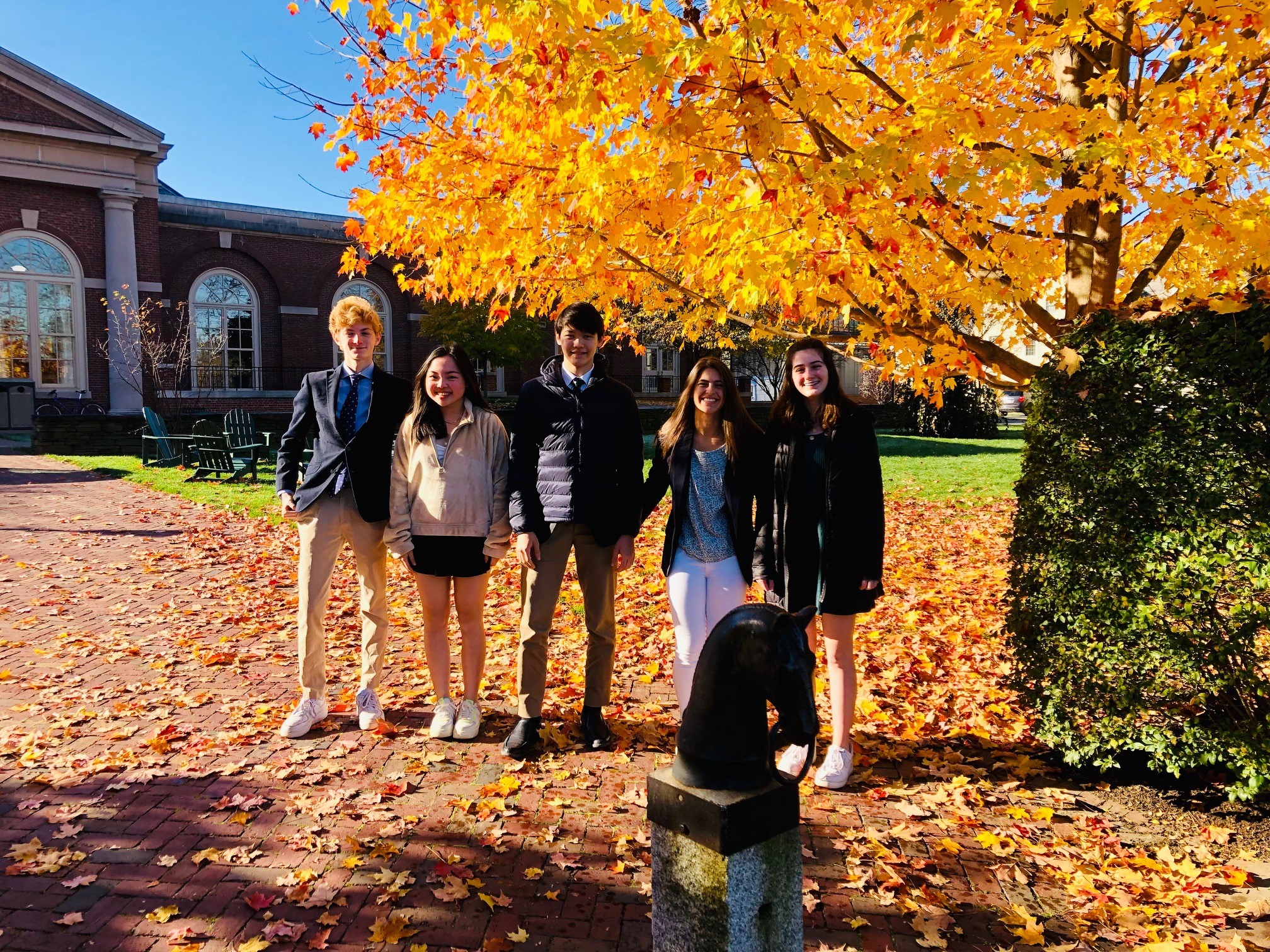 Thirds Volleyball: Grace Spencer ’25
This week’s athlete of the week is Grace Spencer.  Though she was injured and unable to play in practice for the past few weeks, she stayed committed to the team.  She attended daily practice, engaged with her teammates, contributed in drills were she could, fetched balls, and refereed our scrimmages.  She arrived early for games, sat on the bench for all matches and cheered on her teammates with energy and enthusiasm.  This commitment to the team allowed for a smooth transition back to playing in practice on Monday!

Varsity Field Hockey: Maddy Zavalick ’22
This week’s Door of the Week for Varsity Field Hockey is Maddy Zavalick ’22. Over the course of the season, Maddy has been an anchor for our defensive unit. She is an excellent communicator who builds her teammates up at every turn and always encourages those around her to leave everything out on the field. This past Saturday in our game against Andover, Maddy was a big part of why our defensive unit had so much success against a fast and skilled Andover team. Her explosive step to ball paired with her quick feet, fantastic ball handling skills and overall stamina made her an absolute force all over the field on Saturday.

Boys Cross-Country: Trey Souder ’22
Door of the Week is Trey Souder ’22 for spurning the challenge of the rain and mud and absolutely smashing his season best. He ran the 5 kilometer course in 17:57, which represents over a minute improvement from his prior best this season. Trey has developed into a student of endurance athletics, and this mark is a clear result of his patient growth and wise restraint.

Music: Iris Wong ’23
Iris Wong ’23 from the Music Co-Curricular. Iris went out of her way to help a fellow musician feel confident, comfortable, and welcomed as a part of the Deerfield musical family.

Boys Jr. B Soccer: Harry Church ’24
This week’s DOTW for Quad Squad goes to Harry Church 24’. This is Harry’s second year on the Quad Squad team and his level of skill has improved tremendously from last season. Harry is one of the most dependable and focused members of the team and shows up ready to work hard every single day. Harry’s commitment to improving his field play has shown as he has accounted for 2 goals this season and been a crucial component to our offense as a forward. Harry’s improvement over the past two seasons and success on the field this year is a perfect example of what’s possible with a bit of determination, grit, and desire to perform better for your team.

Boys Water Polo: Daniel Wareham ’24
Having seen the varsity mount a strong second half comeback that fell short against Andover, the JV players took to the water and set out to dominate their opponent, winning by a wide margin. Daniel Wareham ’24 helped to lead the way in that game and signaled that he was ready to play a larger role in the season’s remaining varsity games against Suffield and Westminster.

Technical Theater: Reed Ferguson ’24
Reed has been an outstanding member of the technical team this term. Professional, self-sufficient and capable, Reed has relished every challenge that building a large set presents. When we found ourselves without a back-stage stage-manager, Reed stepped in and demonstrated his leadership skills. Calm, thoughtful and resourceful, Reed has been an exceptional addition to the tech team.

Boys Jr. A Soccer: Walter Burkley ‘24
A tough cut for the JV coaches in tryouts, Walter quickly emerged as the one of our team’s most versatile, talented, and committed players. Some early roster holes led the coaches to ask him to move back to defense, and he was immediately a revelation there. His speed, touch, and game intelligence allow him to join the attack without opening us up to counterattack. He is, as a teammate famously declared after our second game, the “model of the modern fullback.” Players watching him from the bench routinely praise his graceful agility, his ability to steal the ball from opponents larger than him, and how he springs right back up when he’s knocked down. His coaches love that he’s always one of the first players on the field every afternoon and commits to practicing hard every day. Walter’s future in Deerfield soccer is bright.

Girls Cross-Country: Aerin Lo ’22
The DoTW for the girls cross country team is Aerin Lo ‘22 for an amazing, spontaneous decision to run in a very wet and muddy race against Andover last weekend! She not only went out of her comfort zone to make the last-minute call to compete, but then she used her time in the race to help her teammates by collaborating with Abby Fernald ’22 to pace Larrabee Pollack ’23. Larrabee had a really strong race, and credits much of that to her pacers. Aerin has been a dedicated member of the team all season long, and her performance on Saturday showcased not only her own personal growth, but also how much she cares about this team. Way to go, Aerin! 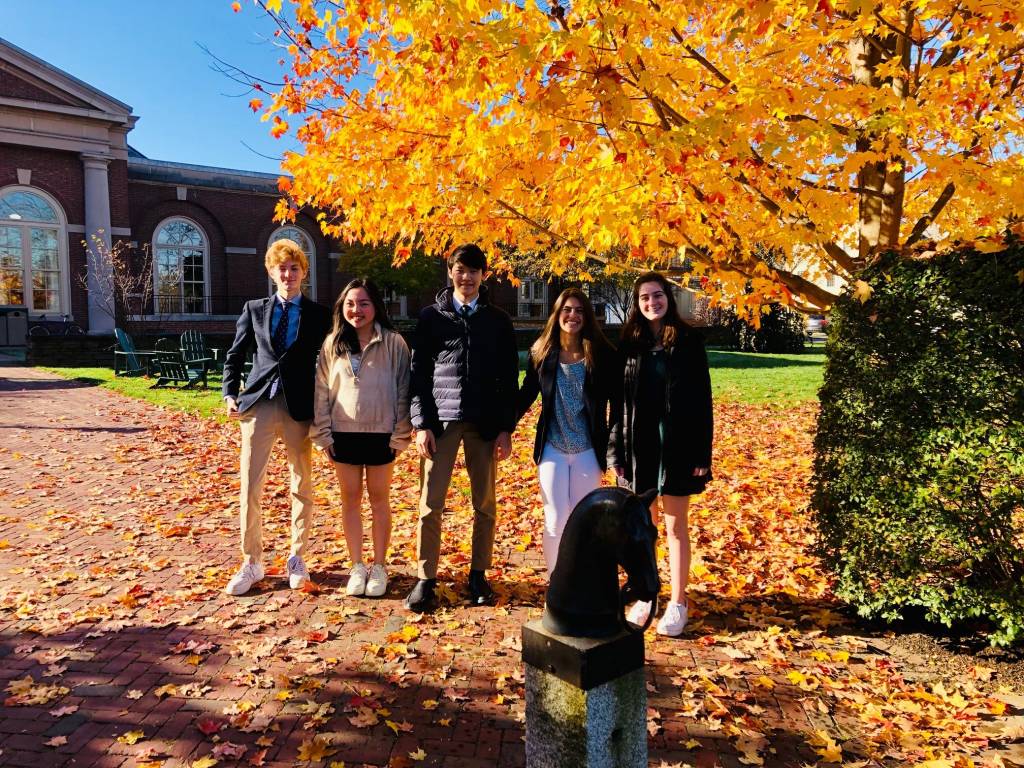