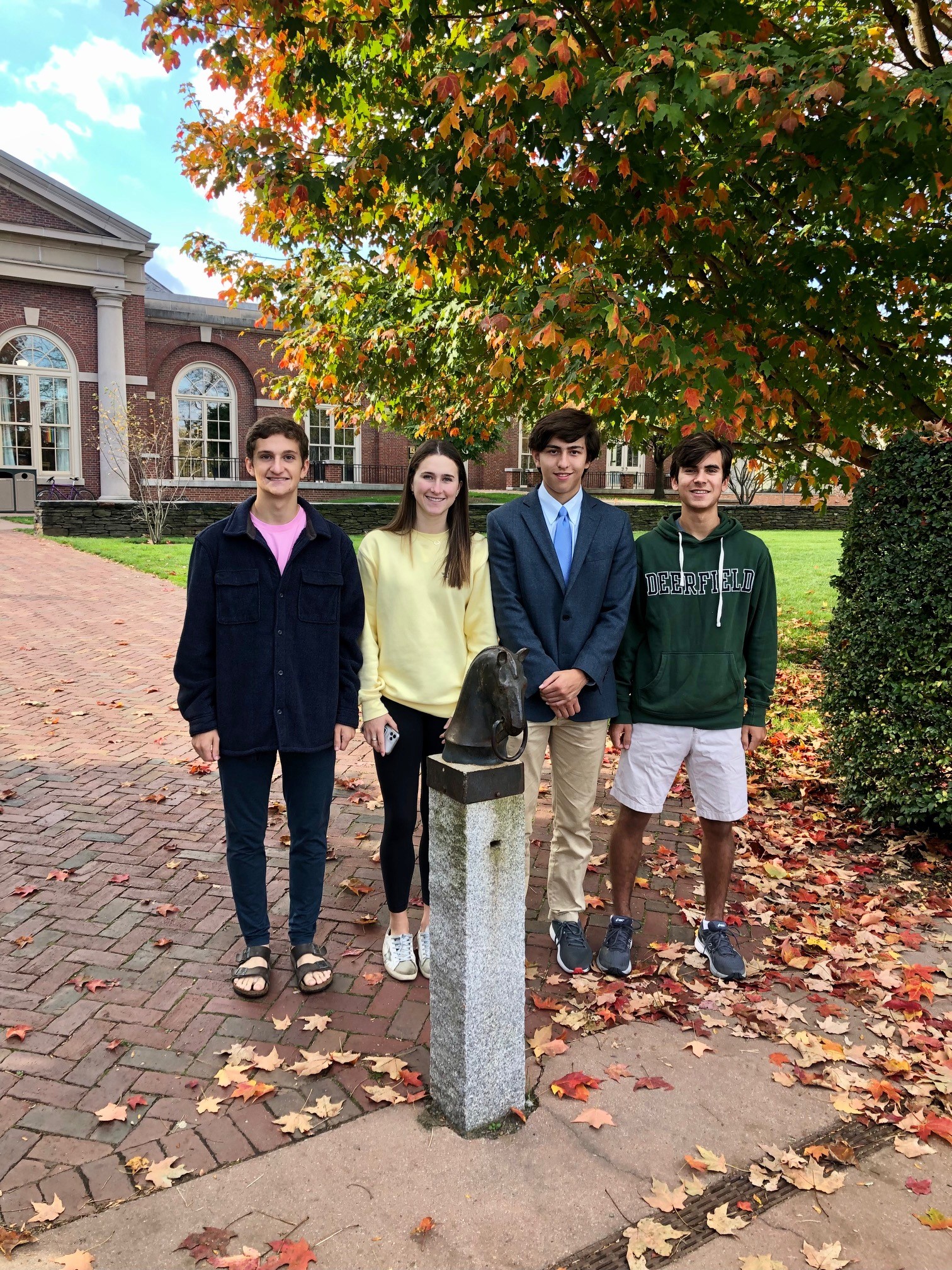 Thirds Girls Soccer:  Natania Reid ‘24
Natania earns Door of the Week for her grit, determination and perseverance. Even when we had no subs and Natania had to play an entire game against a tough opponent, she never gave up. She chased down her opponents and did her best to get the ball out wide. Natania showed grit and team play by working hard and doing her best under pressure.

Boys Cross-Country: Carson Bynum ‘23
Door of the week is Carson Bynum ‘23 for representing the best of the Deerfield cross country culture. Carson has worked steadily for five months in a row to lift himself into the top half of the varsity. Moreover he has made a name for himself among the coaches for his habit of smiling in the face of the deepest pain of training and racing. When Carson smiles, we know work is getting done.

Varsity Volleyball: Natalie Meyer ’23
Our DOTW for Varsity Volleyball is Natalie Meyer. Natalie is a great teammate and brings incredible energy to every practice and game. Over the past couple of weeks we have seen her hitting and blocking improve every day. She is definitely a force to be reckoned with at the net! It is going to be great to see how she continues to improve over the rest of the season.

Varsity Field Hockey: Bailey Miller ‘24
On Saturday, the Varsity field hockey team traveled to Loomis for an away game on their turf.  Bailey Miller ‘24 effective offensive play and speed on the right side of the field was impactful.  She put three balls into the net during the first half of the game, allowing for a score differential that Loomis could not overcome.  She has led this team like a veteran since the beginning of the season, and continues to improve each game.

Thirds Volleyball: Julia Hoie ’22
Our athlete of the week is Julia Hoie.  Julia was brand new to volleyball, but as an experienced athlete and a senior, she was able to pick up the game quickly and improve rapidly over the course of a few weeks.  She quickly distinguished herself as a consistent setter, and her serving has become very reliable as well.  Every week, she is learning new aspects of the game and leading through her example of hard work and dedication.  She played in all four games against Loomis last weekend and was one of our only setters for the match.  She is a teammate everyone can count on to play hard every point!

Girls Cross-Country: Jean Jin ’22
The DAGXC Door of the Week is Jean Jin for her unwavering positivity and commitment to the team. On a daily basis, Jean exemplifies leadership as she makes sure every member of the team feels valued and included, and thinks about how to build community and connection regardless of what we are doing on any given day. This ranges from suggesting team recovery runs, to leading dynamic warm ups, to pumping everyone up right before a race. Jean is the heart and soul of the DAGXC team, and we are so grateful to have her as one of our captains!

Boys JV Soccer: Peter Kurto ’23
Peter has played in the midfield, at center back, and most recently on the attacking wing. His versatility is rooted in his understanding of the various ways we move the ball up field. Regardless of his position, he always working to play the ball with pace, moving it from his feet to the next player’s feet. He tracks back on defense, bringing balanced pressure all over the field. And now, with slashing runs and early crosses, he has activated our attack at critical moments in tight games. Last week at St. Paul’s, he assisted on the game winner and this week at Hotchkiss, he was a menace to the defenders, scoring a goal and assisting on others. He also nearly scored a couple with his head. In the huddle, Peter provides his teammates with insightful and supportive comments and has made excellent suggestions to me for drills and variations to practice. His leadership and play have been instrumental in our growth as a team.

Boys Junior A Soccer: Jack Willett ’23
At yesterday’s scrimmage against Bement, one could overhear players on the bench raving about Jack: “He’s the glue that holds this team together.” That’s a spot-on assessment of one of this successful team’s most critical role-players. This is Jack’s third year in the program. He made Thirds as a ninth-grader but elected to start on Junior B where he thought he could better develop his skills. Placed on Junior A the next year, he ended up the team’s top scorer. And now, returning to the squad this year, he’s a big part of the reason we’re undefeated—as seen in his difference-making goal he scored at Hotchkiss on Saturday. At the wing position, he pairs impressive footwork with even more impressive game intelligence, always positioning himself in, and sending the ball to, the right spot. And when we’ve needed help in the backfield, he’s gladly taken up the challenge of moving to the fullback position, where’s he’s acquitted himself well. His attitude on and off the field is a coach’s dream: he cares more about the team’s success than his own. And there’s no expression more joyful than the one you see on Jack’s face after a goal.

Girls Varsity Soccer: Tenley Elvekrog ’23
The Girls Varsity Soccer Door of the Week is Tenley Elvekrog for her inspirational dedication and commitment to the team. Tenley arrives to every practice and game with positivity, she is always supportive of her teammates and has an unwavering work rate and commitment to being the best soccer player she can be. Throughout the season Tenley has willingly stepped into different positions on the  field, always willing to put the team needs ahead of her own, she has made tremendous growth this season as a result of her hard work. This week Tenley finished a couple of big goals in practice and was instantly greeted with congratulatory “GO TENLEY!” cheers from her teammates! Keep up the great work, Tenley! Congrats!

Boys Jr. B Soccer: RJ Radonis
Our DOTW is RJ Radonis. As one of the co-captains this year, RJ brings an incredible amount of energy and dedication to the team. Despite being new to soccer, he took on the challenging position of sweeper and has emerged as one of the rocks of our defense. We appreciate his leadership and enthusiasm!

JV Volleyball: Corrine Cunningham ’24
Door of the week this week goes to Corrine Cunningham. Corrine has been a staple of the JV defense this season. Her passing and chemistry with libero Lucy Guo help support the whole teams defensive play. No matter how go a team is at offense, they cannot hit without a reliable foundation of defense and serve receive. Corrine’s presence settles the team, and her play allows our hitters to preform at their best. 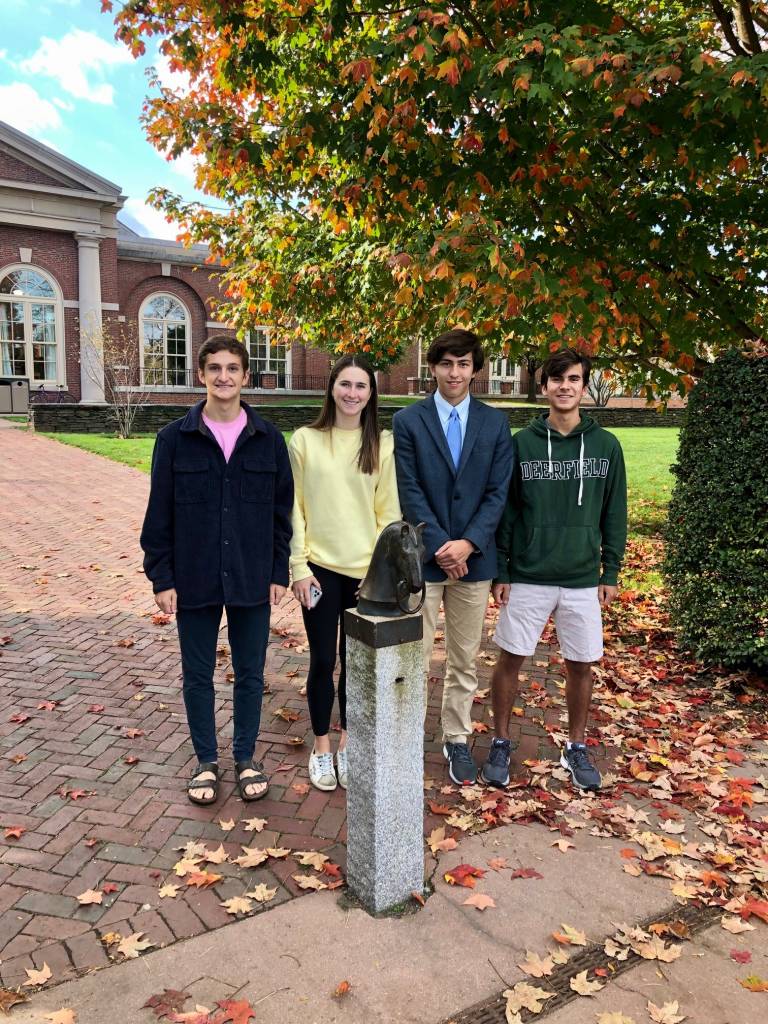