Congratulations to this week’s final Doors of the Week for the winter 2020-2021 term!

Girls Varsity Basketball: Cate Shanahan ’23
This week’s athlete of the week is Cate Shanahan. Cate is new to the team this year, but she has worked hard to adjust to the demands of the varsity level, learn our drills and plays, and contribute in games. Her performance off the bench in our game against Berkshire School on Saturday was outstanding. Within a few minutes, she pulled down numerous rebounds, hit a shot, and got an impressive defensive block. Cate is strong with the ball and hits the outlet quickly and efficiently. She earned her playing time and the respect of her team for her gritty play! She has been a great addition to the squad this winter!

Boys Thirds Basketball: Jarvis Shema ’23
Jarvis has shown tremendous improvement over the term and has become a dangerous scorer, whether shooting from long range or driving to the hoop.

Girls JV Squash: Zeyna Ilahi ’22, Olivia Waterfall ’23, Hunter Pulliam ’22, Coco De Vink ‘22
Zeyna, Olivia, Hunter, and Coco served as instrumental figures in creating a sense of community among their teams. Zeyna and Coco prepared small, pink crowns for each member of their team, and they labeled the crowns with the names of each girl. Hunter and Olivia took the time to coach the members on their Neon team on Wednesday so that they would be prepared to play on Thursday. Thank you, girls, for stepping into a leadership role on your respective teams!

Boys JV Basketball: Henry Griffin ’24, Barack Mwesigwa ’24, Max Peh ’24, Eddy Rena ’24, and Ephraim Tutu ’24
In our final nomination for Doors of the Week, we look to the future, and what a bright future it is. Henry Griffin, Barack Mwesigwa, Max Peh, Eddy Rena, and Ephraim Tutu compose this year’s ninth grade group that made the JV team in their first year at DA. Each has brought energy and effort to this year’s team while contributing with their own very individual combination of skill and style. Henry has shown great poise and skill as a point guard. Barack is a slashing forward with a growing set of moves around the basket. Max can play around the hoop and also on the perimeter. Eddie can also do a little bit of everything with well-developed dribbling skills, a nice shot and an ability to guard both small and big. Ephraim also shows promise at the guard position bringing tenacity and a nice ability to score around the basket. Most importantly though, we appreciate how diligently this group has worked to improve and the joyful way in which they have engaged in practice each and every day this season. They have all contributed significantly to our success this season and for that we name them our Doors of the Week in this, our final week of the season. We salute all of our players for their efforts this year and look forward already to next season.

JV Swimming: Hannah McKie ’22 and Ella Hynds ’23
JV swimming is pleased to nominate Hannah McKie as a JV swimming Door of the Week. Despite joining the team late, she dropped 16 seconds in the 50 free over the course of the season, a testament to her determination and hard work.
JV swimming also nominates Ella Hynds as a Door of the Week. Also a latecomer to the team, her efforts yielded 7 second drops in both the 50 free and the 50 backstroke making her a welcome returnee to the team.

JV Squash Doors of the Week: Jamie Weymouth ’23 and Christian Reavis ’23
While Jamie and Christian weren’t the most experienced members of the JV squad, they made up for their lack of experience with enthusiasm and incredibly positive energy. Both players were new to the game but spent every practice running as hard as they could and having a lot of fun creating chaos on the squash courts. Jamie/Christian came to practice every day with big smiles and great energy, the season was a lot brighter because of their contributions and hard work!

Theater: The entire Theater Co-curricular and Acting/Directing class
This week we are thrilled to nominate the entire Theater co-curricular and Acting/Directing class for their tremendous effort in creating 15 pieces of work for Artsapalooza. The pandemic threw us some challenges, but we are so proud of the way students pivoted to create work in an entirely different way. Working as a true ensemble, students from each grade spent time in rehearsal as well as in tech, and they supported each other as scenes were filmed. We are impressed by the body of work produced, and even prouder of the collaborative spirit fostered by all theater students this term.

Athletics Concentration: Gale Gai ‘22
A big shout out to Gale Gai who has stepped in this term and commentated athletics livestreamed events and conducted several interviews with student-athletes for student spotlights! Gale works hard in preparation for commentating games and shares his passion for the game and supporting Deerfield teams in his broadcasts and interviews. Deerfield fans have both enjoyed and appreciated his play-by-play announcing during games and reading his interviews with students. Many thanks, Gale!

Girls Thirds Basketball: Sally Roland ’23
Sally Roland is the Girls Thirds Basketball DOTW. A force to be reckoned with on both the defensive and offensive end, Sally is one of the few ambidextrous players in the game who will not only beat you off the dribble with either hand; she also shoots with the right and the left from 15 feet! On the defensive end, Sally uses her quickness to block her opponent’s path to the rim. Off the court, she is a vocal and straightforward leader, always ready to tell coaches where she and the rest of the team stands on a certain drill or activity. This, coupled with her sense of humor and overall competitive drive, have made Sally a great teammate and player to coach. 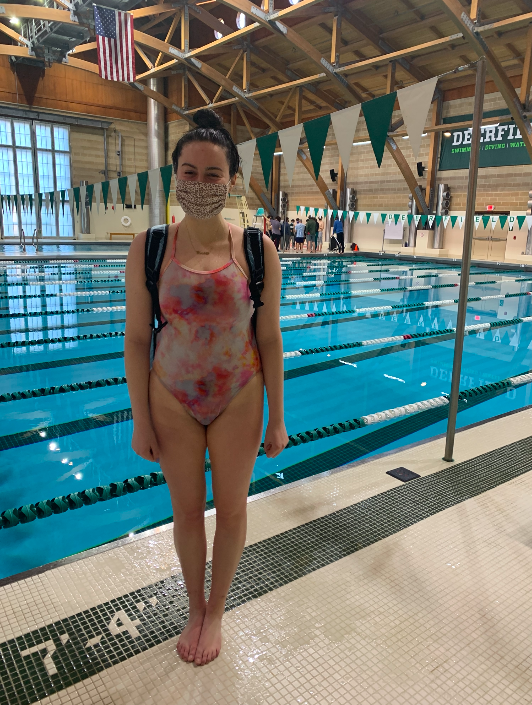 Girls Varsity Swimming & Diving: Charlotte Otis ’21
Our door of the week this week was Charlotte Otis, who is also one of our captains.

Boys Varsity Swimming are: John O’Loughlin ’21 and Marwan Gedeon Achi ’21
The Varsity boys swimming program is happy to name our two captains, John O’Loughlin and Marwan Gedeon Achi, as our Doors of the Week. John and Marwan are four-year swimmers that have contributed to all aspects of the program – from practices to meets to team spirit. To quote a famous coach, “The position of captain is given to those athletes whom the rest of the team respect and trust to lead the team in the right direction.” John and Marwan have done a great job of leading this team through a pandemic-induced season that has been unlike any other. Their dedication to the team’s camaraderie and training sessions has set an example for the rest of the squad that even in challenging times, good can come out of it. Perhaps this year more than any other the demand for positive leadership is greatest and John and Marwan stepped up and helped create a very successful 2020-2021 swim campaign for the varsity boys squad. The coaches have enjoyed their commitment and attempts at humor these past four years, and they will be missed!

Boys JV hockey: Jan Flaska
The boys JV Hockey team wishes to thank Coach Flaska for all his time officiating the many Green/White JV hockey scrimmages each Thursday throughout the season. Mr. Flaska always brings the right energy and enthusiasm to everything he takes on. His presence and expert officiating made these scrimmages feel more like the real thing! From the entire squad; many thanks!!