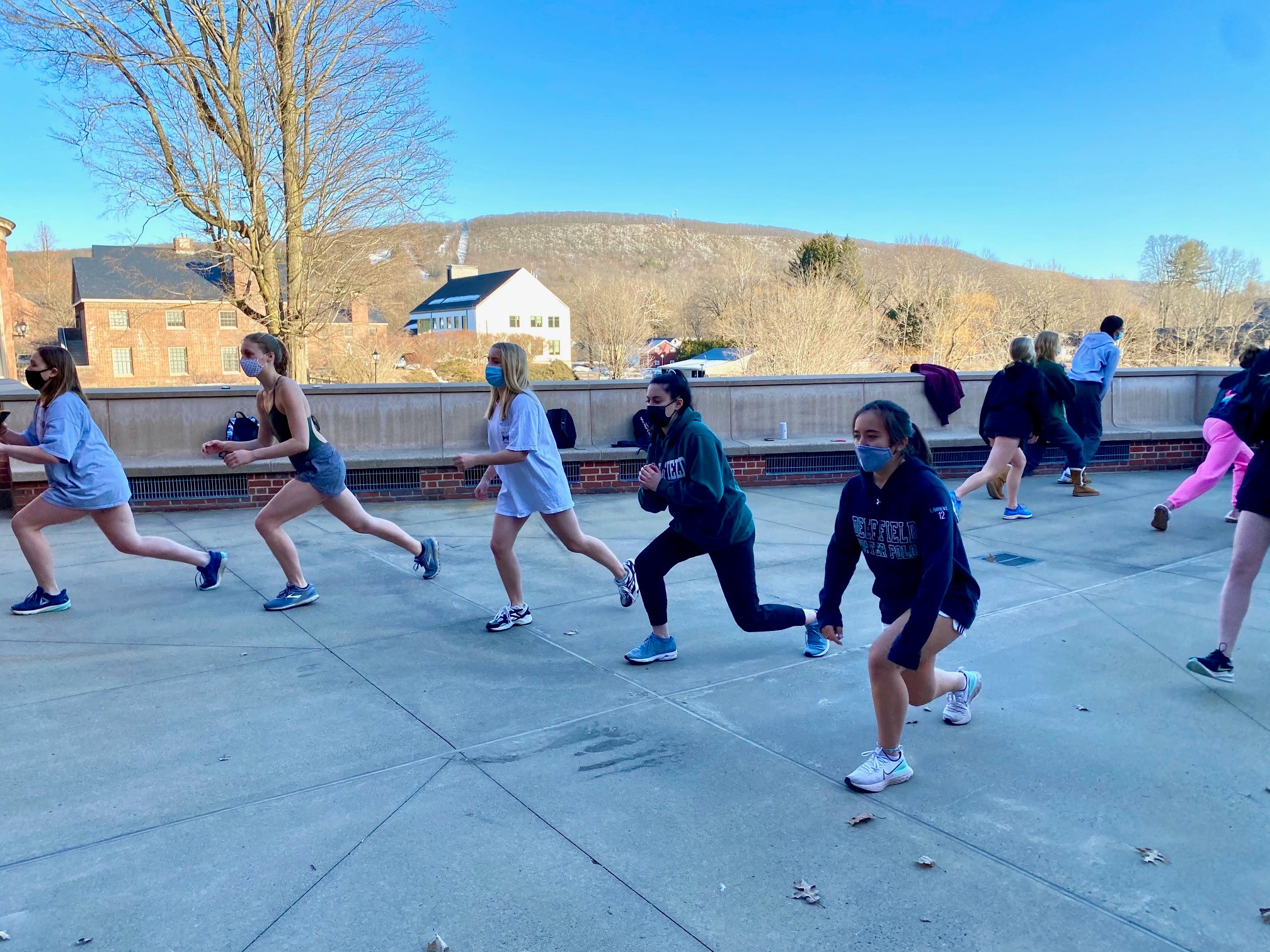 Deerfield teams had a great final full week of winter practices and competition! Congratulations to students, teams and coaches on a great season!

Girls Varsity Hockey:
Vs. Berkshire – Deerfield Girls Hockey played our first home game of the season, defeating Berkshire 4-0. After a pep talk from Dr. Austin, the girls came out and scored two goals in the opening period, the first from Jackson Kinsler ‘22 and the second when Ellia Chiang ‘21 put home her own rebound. Though penalty trouble was the story of the final two frames, Bliss Vernon ‘22 and Elena Junkala ‘22 both scored their first Deerfield goals off of gritty efforts to secure the victory. Keri Clougherty ‘21 and Sara Ito-Bagshaw ‘22 were excellent on defense, and Emma Tennant ‘21 earned the shut out, and the hard hat, in net for the Big Green. Big shout out to Ollie Hemphill ‘22 for making life tough for us as the Berkshire goalie!
@ Berkshire – Deerfield Girls Hockey hit the road today for an early afternoon match up against Berkshire. After a scoreless first period Annie Dinges ‘24 gave us the lead on the power play, and we scored two goals in the third period, the first from Bri Felice ‘21 (assists to Lisa Ito-Bagshaw ‘21 and Jackson Kinsler ‘22) and the second from Ellia Chiang ‘21 (assist to Sara Ito-Bagshaw ‘22). Emma Tennant ‘21 earned her second shutout of the weekend, and Ollie Hemphill ‘22 once again was strong in goal for Berkshire. Sam Olander ‘23 was awarded the hard hat for her smart and tough play in the defensive zone. We are incredibly grateful for the opportunity to play this weekend, and look forward to next weekend’s contests against Cushing.

Girls Varsity Basketball:
The highlight of this week was our first and only away game of the season at the Berkshire School.  The team sang and danced the whole way to and from Berkshire, enjoying pizza and team bonding time on the bus.  A favorite moment was pulling onto Albany Road and shouting the Deerfield Fight Song at the top of their lungs for the first time in a year.  The team played with hustle and heart, beating Berkshire on both Friday and Saturday!

Boys JV Basketball:
What’s this!? JV basketball playing in March!? March Madness indeed! For the first time in recent memory at least, the JV basketball team is playing in March, a fitting end for such a crazy season. The team has continued to work hard and play joyfully and competitively. We are really proud of each and every one of these players for their efforts this year. We continued to work on a range of individual skills, improving dribbling and learning new moves, as well as shooting and footwork. It’s the kind of practice work that takes focus and mental effort more than physical effort and the boys have been up to the task every day. The scrimmage of the week was another close affair at least until the final minute or so. But the final score belies the competitive aspect of the game and the effort put in by both sides. Returning players Tommy Leimkuhler ’21, Sultan Lawa ’21, Will Stultz ’22, Gabe Zaccheo ’22, Luke Shields ’22,Oscar Patton ’23, John Patton ’23, and Ford Holmen ’23 all stood out at different moments and different ways. But this scrimmage was perhaps most remarkable for showing the progress of our first year players. Tysean Price ’22, Moises Castillo ’23, Jeff Wang ’23, Zhexuan Li ’23, Max Peh ’24, Barack Mwesigwa ’24, Henry Griffin ’24 and Ephraim Tutu ’24 all arguably played their best game of the year which was incredibly heartening. Each of these players has worked so very hard this season and it’s rewarding for coaches and team to see them earning such results. It’s a testament to the spirit and attitude of these players that they continue to improve and work hard in a season that has not had some of the usual rewards. We hope on Wednesday to have our final scrimmage, our final day of play together as a team. We were missing several players last week and are hopeful that some of them might be able to rejoin us for the final days. Regardless of what we do over these last three days, this has been a remarkable group in a remarkable year.

Boys Thirds Basketball:
The 3rds team had another full week of scrimmaging, with the Green team again besting the White team by a score of 3-1 throughout the week. That gives the Green team an insurmountable 6-2 lead, with only a few days of practice left. We’ll continue the rivalry for a few more games and hopefully White can win another one or two before the season is over.

Girls Thirds Squash:
On Thursday our unusual season concluded in a more familiar way: with a big three-team match. But this time, the teams—Green, White, and Neon—were made up of a mix of Thirds and JV girls. The white team—which included Stella Fierro, Charlotte McIntosh, Clara Chae, and Iris Wong from Thirds—came away victorious in both team matches it played, winning themselves two big bags of candy they enjoyed in the corner of the courts while Green and Neon finished their match. In their first chance to square off against JV opponents, Stella, Charlotte, Linnea Dreslin, and Isabela Cushman all won their matches, suggesting next year’s JV tryouts will be an especially competitive event. We put the season to bed on Monday with a team dinner in the Dining Pavilion, feasting on Chipotle, a favorite post-match stop in the pre-Covid times. Coach Hamilton thanks the team for their dedication, flexibility, and good will this winter and can’t wait for next year!

Boys Varsity Squash:
Although our squash season never got off the ground, the Varsity team worked very hard and improved despite the lack of interscholastic play. This team was the deepest team that I have ever coached in my forty-three years of coaching squash! That being the case, our individual team matches against each other were arguably more competitive than ninety-five percent of the matches we would have had had we played our schedule. We were able to livestream these matches over the course of the season and at least our parents were excited and followed them closely. We graduate four seniors who have been in the top ten for all of their four years here. That includes Merritt Wurts, Charles Braff, who played in the top seven for all four years; and Fred Manning and Rob Sawyers, who did so in their last three years. Merritt was on track to break the total wins record of Ted Durfee, but unfortunately, that was never able to happen. As we graduate five players from the top ten, we return a very strong group, led by juniors Ahmed el Wabory, Beck Ayres, Billy Kitchel; Sophomore Bennet Eun;  and freshman Lucas Capella. Bennett and Lucas would have played in the top seven this year! We did manage a season ending scrimmage against Belmont Hill, always a strong program.  We were able to win all seven of our matches. Even though it didn’t count for anything in particular, it was fun to get a taste of interscholastic play. With the strength of our returning players and the addition of some strong players coming next year, we are looking forward to competing at a high level next season. Big thanks to the athletic department, Mr Howe, and Mrs Barbato, for their support! They really helped to make it happen!!

Girls Thirds Basketball:
We made the most of the last full week of thirds girls basketball this week, with our first full-court game of three-on-three – it was certainly fun to watch, and it looked like a lot of fun to play, too! The girls also practiced some other sports, including volleyball and a rather competitive game of dodgeball. Despite the unconventional circumstances of this season, the coaches are grateful for the positivity, enthusiasm, and kindness of every player on the team, and we are sad that the season is over. Looking forward to next year!

Boys Varsity Swimming & Diving:
All of our training to date this year has led us to our final “historical virtual meet” against our dreaded rivals, Choate.  For the Meet on March 3rd we took on the Choate team from 2004.  In 2004, the DA squad went into the final relay down by one point and just got out-touched in that last relay by 0.2 seconds and lost by the final score of 89-96.  So, our team was going for a little bit off retribution!  After an excellent opening in which the squad took both 1st and 2nd in the opening medley relay, things were looking up.  By the diving break, after 1st place swims by Robert Amundson and Mark Cai in the 200 free and 50 Free, respectively, the team led 33-29.  In the second half, great swims by Marwan Gedeon Achi, Totton Heffelfinger, Forrest Gao, Sean Kim, and the rest of the squad kept us in the race but still falling a little short.  The Deerfield team went into the last relay down by two points – almost identical to the 2004 squad.  After the final 400 Free Relay, where the Big Green took 2nd and 3rd places, the final score was 91-94 in favor of Choate.  The team has grown and continued to fight in every meet this year and can walk away proud of their accomplishments in this odd year.
In the final week of the season the boys will combine with the girls squad to hold a coed Green & White meet next Thursday, March 11.  It should be a fun meet – a great way to end the season!

Girls Varsity Swimming & Diving:
We had an awesome meet against Suffield last week and some of our girls swam their “personal best” times, which is really impressive given we are practicing for less time and swimming less yardage than a “normal” season. We are looking forward to having our senior meet this Thursday followed by a banquet for both the boys and girls varsity swim teams.

Girls JV Squash:
The Girls JV Squash team had another solid week.  The girls pushed through a workout on Tuesday, and, with the help of Coach Brian Hamilton, the team played with the Thirds players (special thanks goes to Coach Hamilton for doing a lot of the heavy lifting here!).   The JV players mentored the Thirds girls on their team and fostered a strong sense of community.  The girls dressed in the color of their team name (Green, White, and Neon) and played some competitive matches against their teammates and the girls on the Thirds team.  Nice job, team! 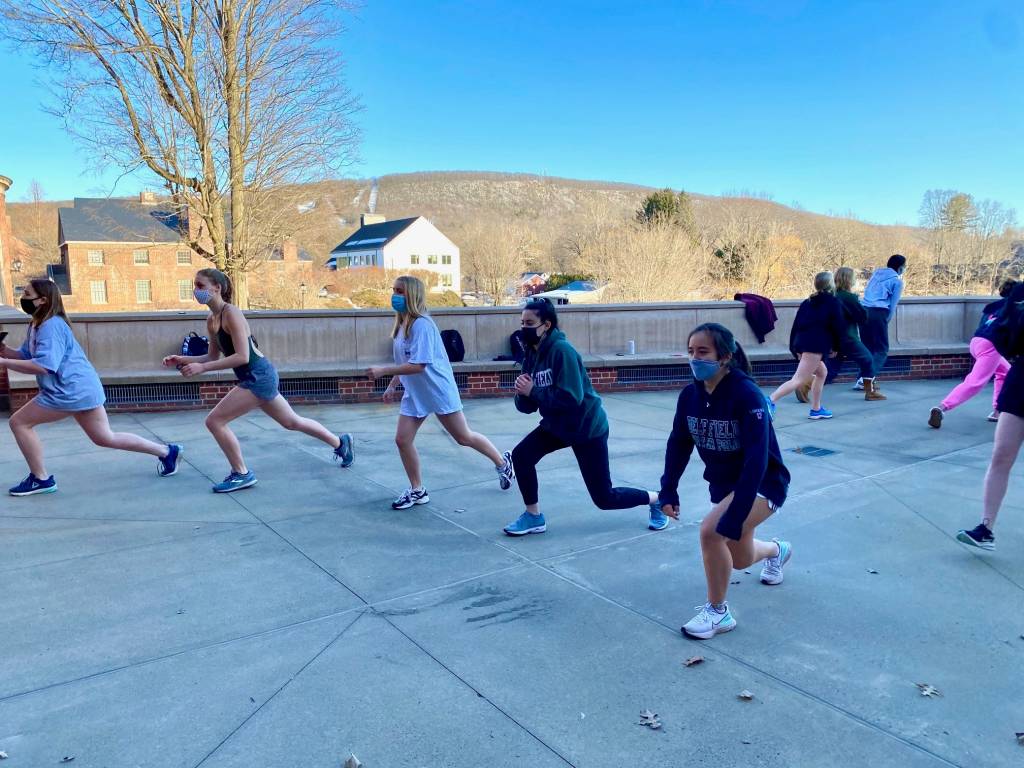