Deerfield Lax Shines in the NESCAC

With a week of spring practices behind us and competitions starting this week for a number of Big Green teams, it’s time to highlight some young alumni who are off to a hot start in their collegiate sports. This week, we feature four girls lacrosse players who are making a name for themselves in the NESCAC. The four former Deerfield student athletes are Allison Dewey ‘14 who currently plays for Bates, while the other three, Mettler Growney ‘13, Elizabeth Growney ‘16 and Kelsey Gallagher ‘13 are all members of the Bowdoin Polar Bears. 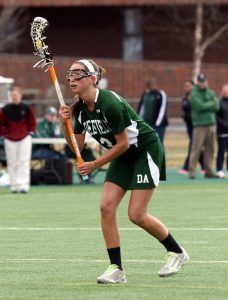 Allison arrived at Bates in the fall of 2014 and made an immediate impact, posting five goals and two assists as she appeared in all 15 games and started 11 of them. More impressively, she led the team in ground balls and caused turnovers and was second in draw controls. Allison followed up a great freshman campaign with an outstanding sophomore season as she led Bates to a 12-6 overall record while scoring 16 goals and adding eight assists, once again leading her team in ground balls and caused turnovers. After her sophomore season, she was named First-Team All-Pilgrim Region and Second Team All-NESCAC. At the midpoint of her Junior season, Allison is on pace to post even more impressive numbers than last spring as she currently has 15 goals and two assists, having only played ten games thus far. To start the season she was previewed as one of the D-III women’s players to watch according to the New England Lacrosse Journal. She was also responsible for perhaps the most important play at this point in Bates’ season when she “scooped up a loose ball at midfield, charged ahead and scored the game-winning goal with 2:48 remaining in overtime” to lift Bates to an exciting 8-7 win over Williams last Saturday, the team’s first NESCAC win this spring. 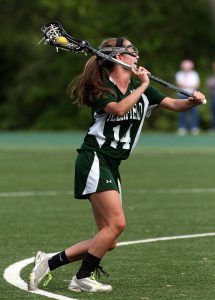 Mettler, who we highlighted in the fall for her outstanding field hockey career, is also a force to be reckoned with as a member of the Bowdoin lacrosse team. Through her junior year, Mettler appeared in 45 contests, posting 31 goals and adding 20 assists, averaging more than a point per game. Her senior season is off to a great start as Mettler has continued to be a threat to opposing team’s defenses, having already notched 10 goals and two assists and is on pace to set career highs in goals and points in a single season. In today’s athletics landscape, it is rare to see an athlete be so dominant in two different sports at the collegiate level. 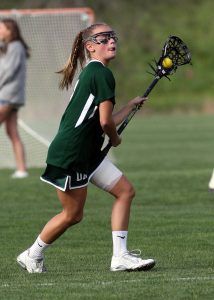 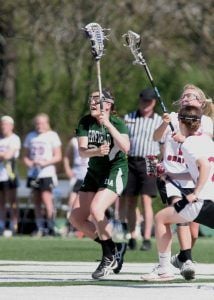 Kelsey Gallagher, currently a senior at Bowdoin, is the third Deerfield alum competing as a member of the Polar Bears women’s lacrosse team. Kelsey has enjoyed a career season this spring, having already set career highs in goals (17), assists (7) and points (24) only eight games into the season. She also leads her team in all three categories and thus has been instrumental in the team’s success this year as they are currently 6-2 at the midway mark.

“We are proud of all of the Deerfield graduates playing collegiate lacrosse across Division I and III programs. The four girls highlighted in this story are among those athletes setting a strong example for our current players of the commitment, dedication, and excellence required to play and excel at the next level.” said Allison DiNardo, Deerfield’s girls varsity head lacrosse coach.

This Wednesday, April 5th, Bowdoin will make the short trip to Bates for a 7 PM NESCAC showdown in what should be a very exciting game! Good luck to both teams! Tune in to watch the action by clicking HERE.

Stay tuned for more girls lacrosse alumni updates as we follow their collegiate seasons this spring.